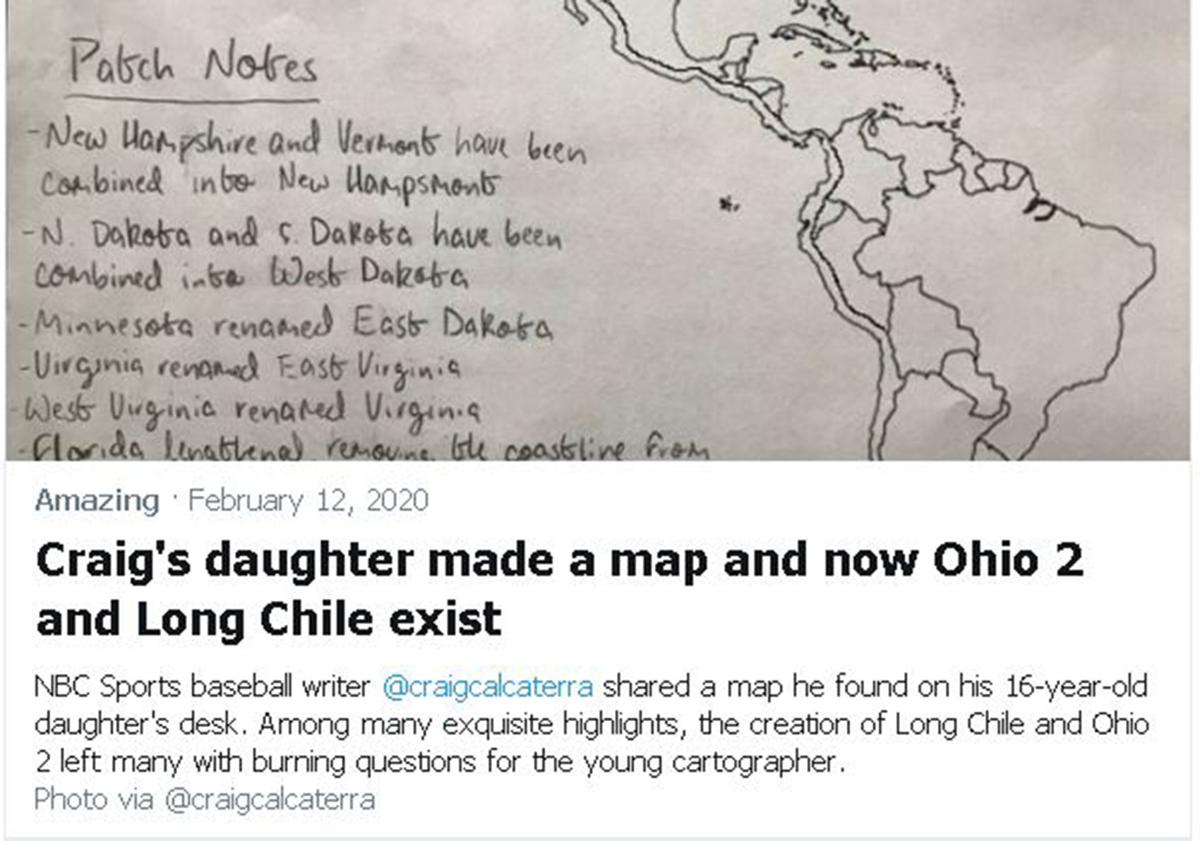 NBC Sports writer Craig Calcaterra became a trending figure on Twitter Wednesday, Feb. 12, when he posted a fictitious map of the Western Hemisphere his daughter had drawn. 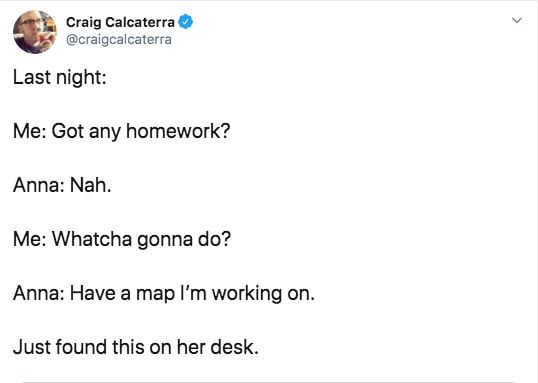 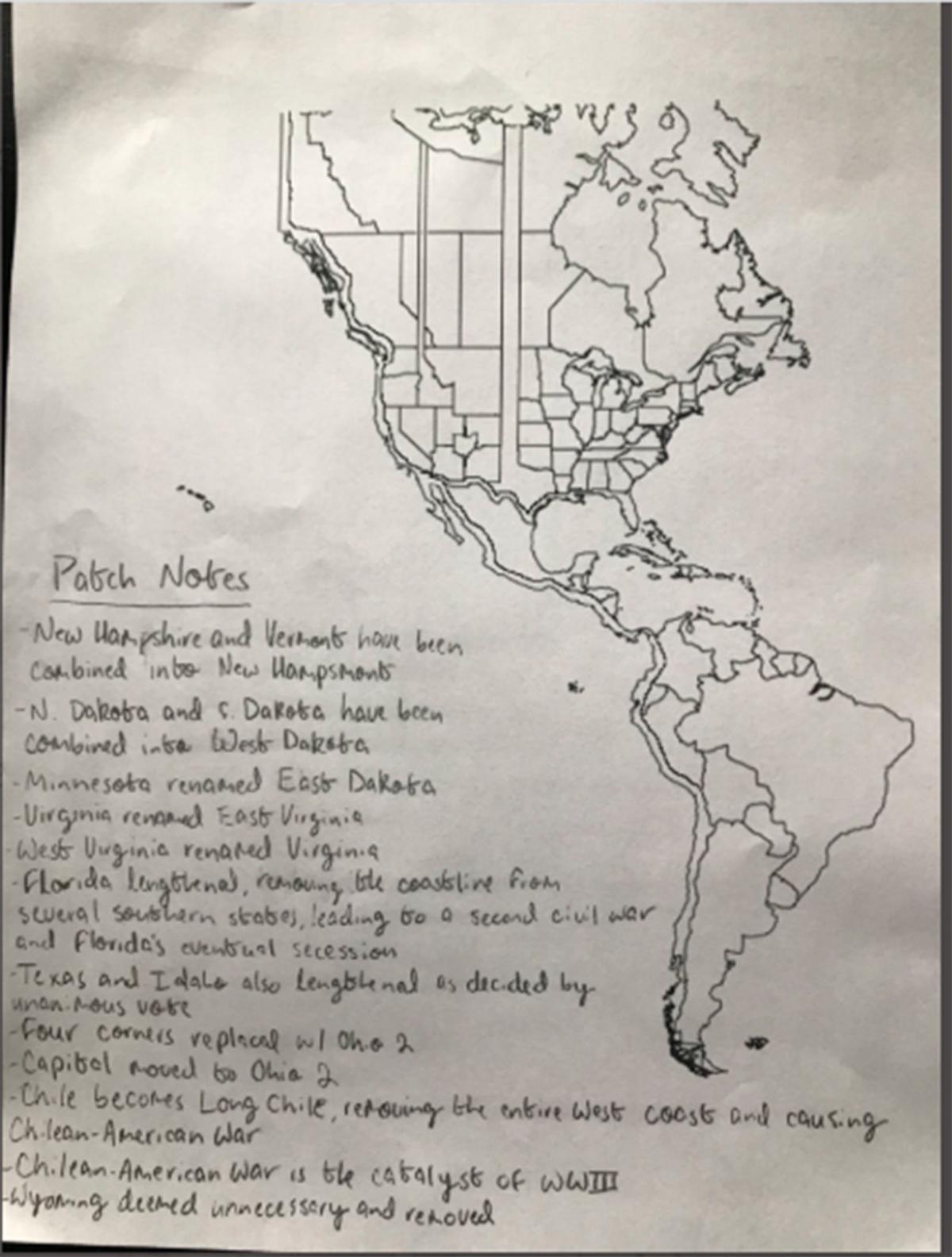 A photo of a fictitious map Craig Calcaterra's 16-year-old daughter, Anna, drew. The map depicts an alternate version of the Western Hemisphere. As the map shows, places like Texas and Idaho look much different. 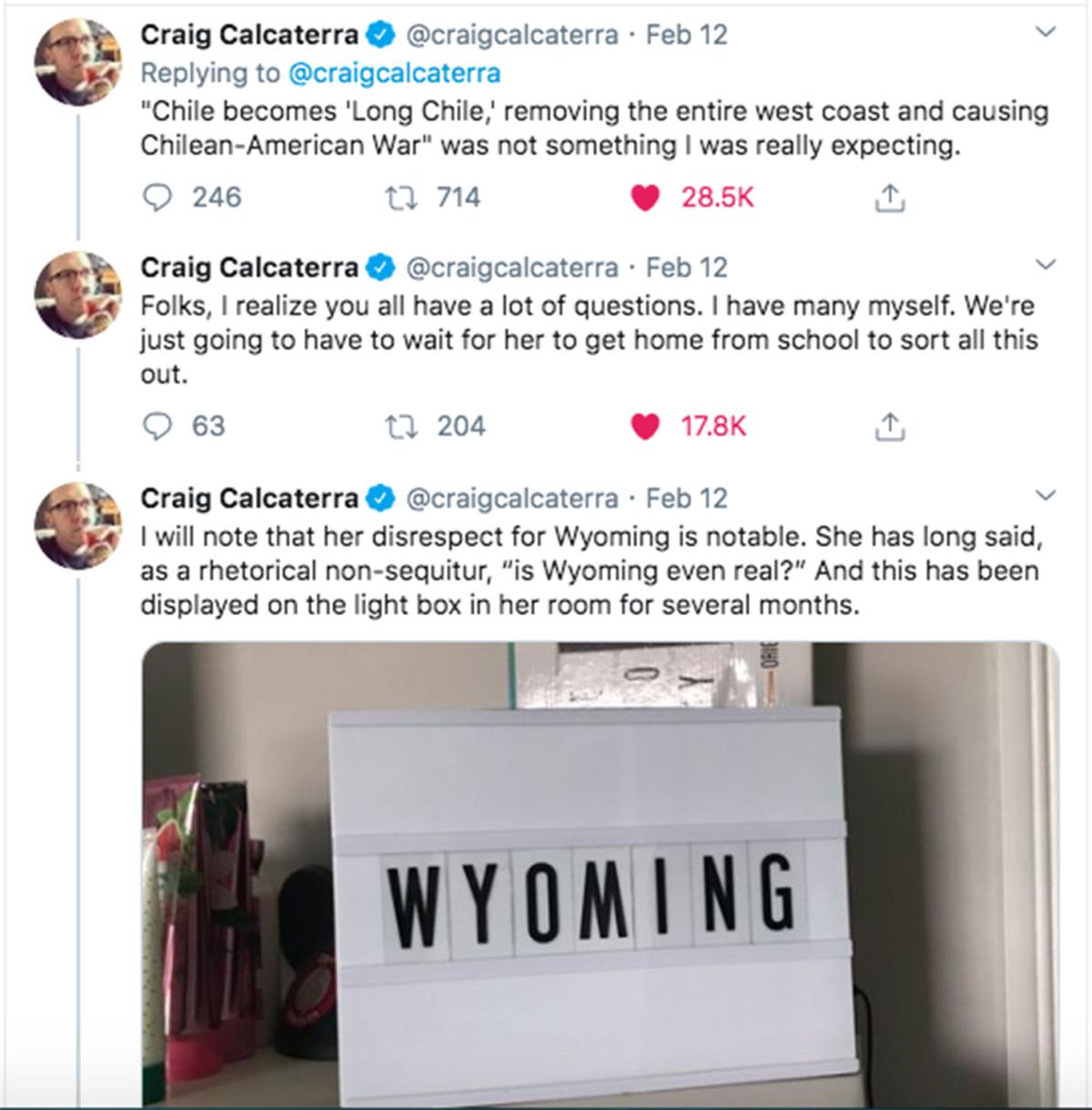 Craig Calcaterra's daughter, Anna, doesn't much care for the state of Wyoming. 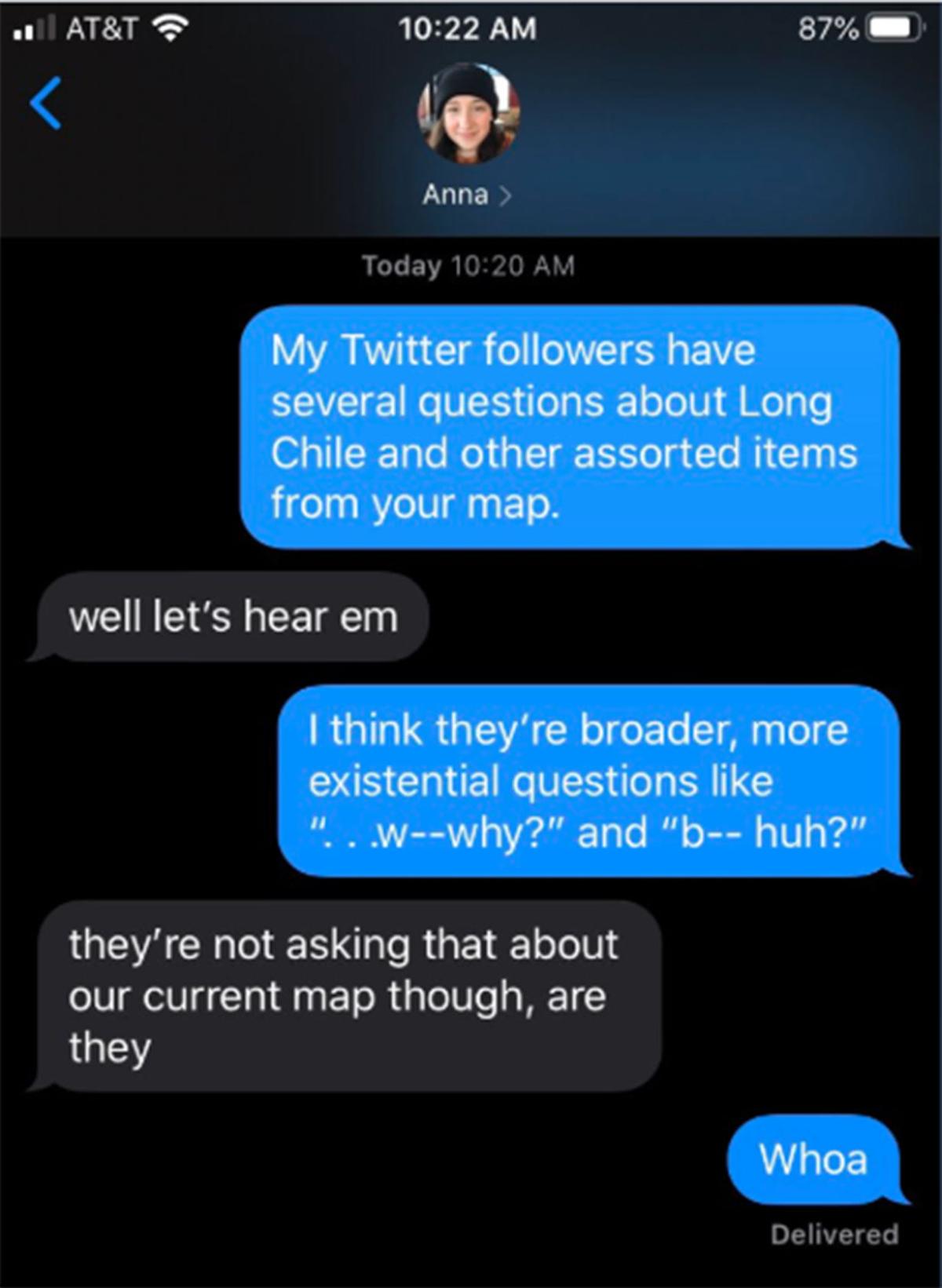 This text message conversation between Craig Calcaterra and his daughter about her fictitious map gets unexpectedly deep. 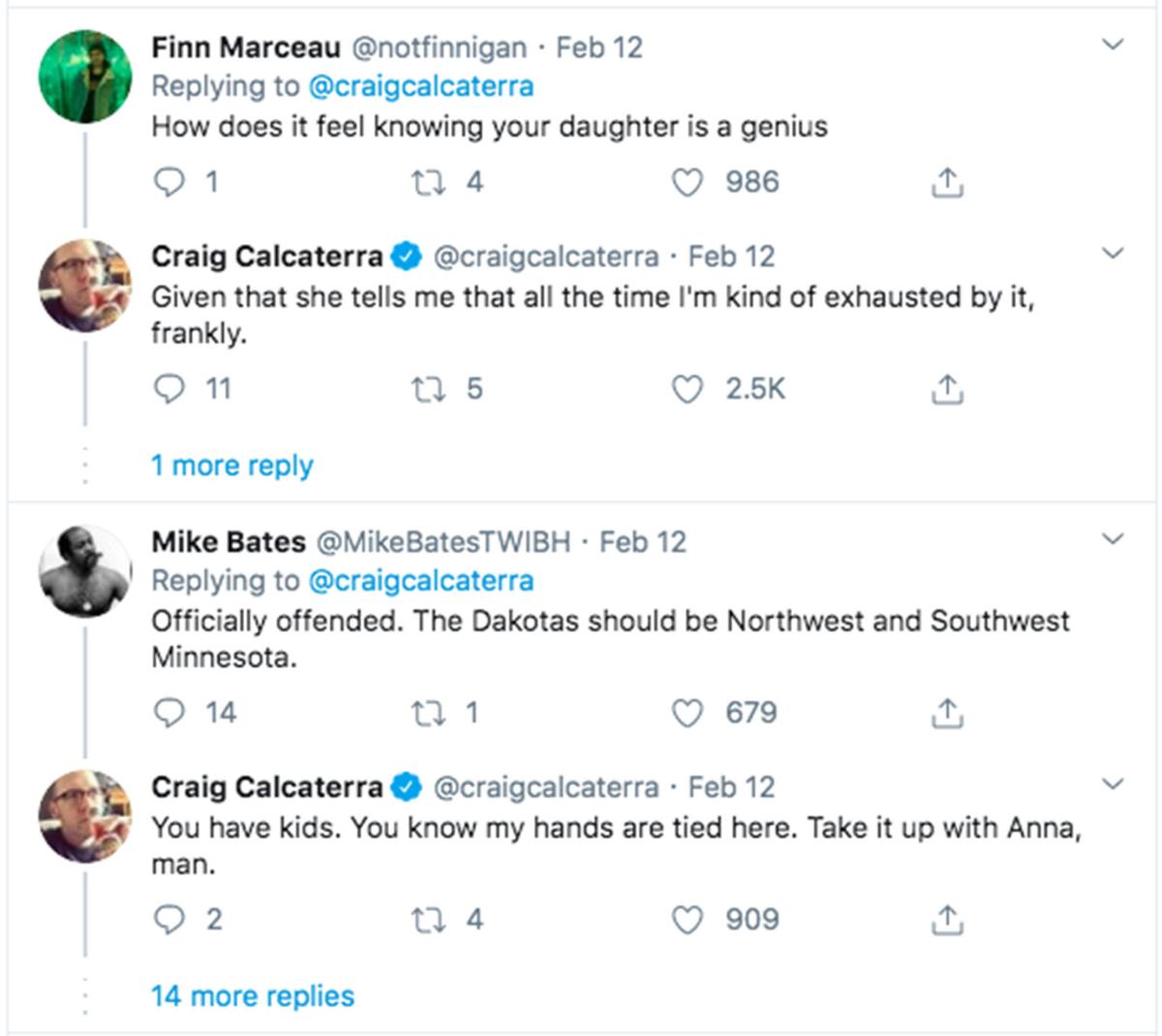 I found the responses Craig Calcaterra received on Twitter regarding his daughter's fictitious map — and his replies to them — to be very entertaining. 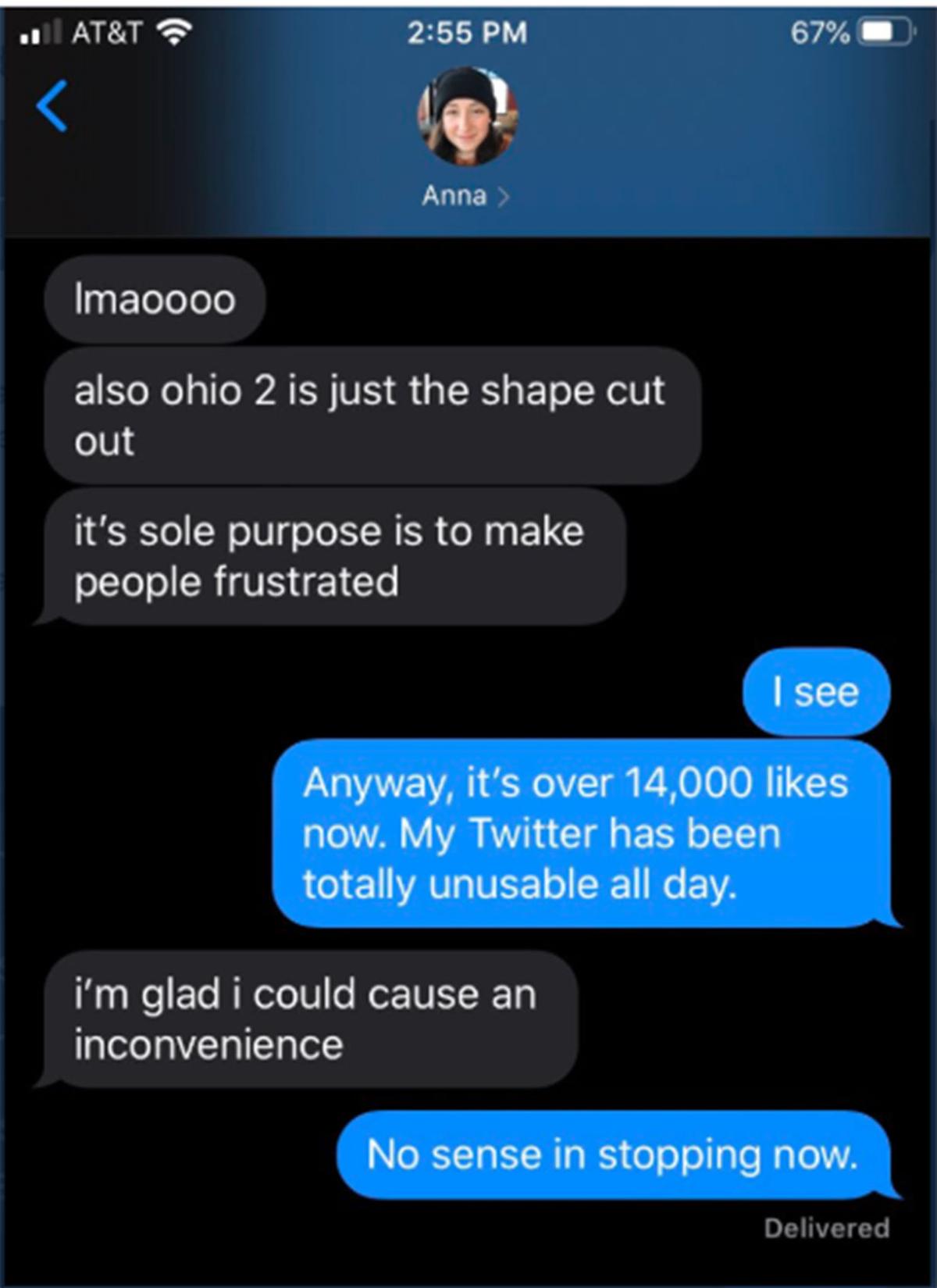 Anna Calcaterra was pleased she could throw in a bit of Twitter chaos to her father's day on Wednesday, Feb. 12.

The best thing to ever trend on Twitter came courtesy of NBC Sports writer Craig Calcaterra on Wednesday, Feb. 12.

I happened to be on the site that evening when I saw the headline, “Craig's daughter made a map and now Ohio 2 and Long Chile exist” was trending.

I had no idea what that meant and clicked on it immediately.

And I was very glad I did.

Calcaterra’s 16-year-old daughter, Anna, had drawn a bizarre, yet darkly whimsical alternate version of the countries in the Western hemisphere. (Don’t worry, he got her permission first before he posted the photo of her work).

She included notes to one side explaining the key (yet fictitious) events that led to her map being the way it was.

The first few involved simply renaming or combining states in the United States:

Then the history of her map took a somewhat bloodier turn, with events such as:

But my favorite changes she made were the most wonderfully absurd:

When Calcaterra eventually informed his daughter that his Twitter followers had many questions about her map, her profound response quickly wiped the smile that had been on my face the whole time I was studying her cartographic work:

The responses Calcaterra received from people on Twitter about Anna’s map — and his occasional replies to them — were almost as fun to read as the fictional history his daughter created:

Anna's responses to her father's question about Ohio 2 — and the fact his Twitter account had quickly been inundated with people reacting to his tweet — were also perfect:

Needless to say, I followed Craig Calcaterra on Twitter that evening

Calcaterra also shared his thoughts — quite eloquently and insightfully, I might add — about what it’s like raising two teenagers in 2020 and how Gen-Z kids tend to look at the world.

As Calcaterra’s children show, Gen-Z kids may have a tendency to be different than us Millennials-and-older-crowd, but their hearts are in the right place.