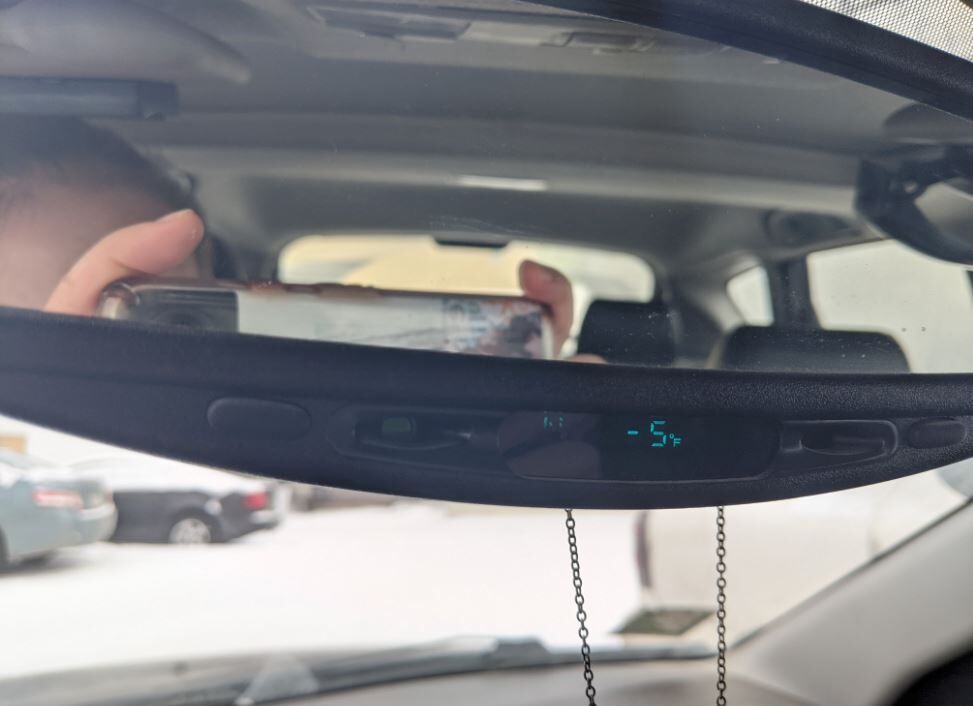 The temperature reading in Lydia's car on Friday afternoon, Feb. 12, said it was minus 5 degrees outside. The weekend promises to be even colder.

Screenshot of the National Weather Service forecast for Feb. 12-15, taken at 1:37 p.m. on Friday, Feb. 12. Overnight lows promise to be in the negative double digits.

It’s cold enough outside that my all-season windshield washer fluid freezes to the glass when I try to clean the windshield.

This weekend, forecasted daytime highs are all of 1 degree for Saturday and -7 on Sunday. Factor in windchill and it’s sure to feel 15-20 degrees colder.

Overnight lows are even chillier. Saturday will dip to -20 with a windchill feel of -36. Sunday night promises a -27 degree arctic freeze.

Seems like we’re in for another staying-in sort of weekend.

I can always tell when Midwest winters hit their stride – that’s when you get videos and photos popping up frozen eggs on the sidewalk, snow beards and those dedicated individuals who decide running in subzero temps is the thing to do.

Joseph Long sported a beard of snow and ice as he used a snowblower to clear all the sidewalks on his block of Northeast Tyler Street, something he does often according to a neighbor, after an overnight snowfall blanketed the area Thursday. (Anthony Souffle/@StarTribune) pic.twitter.com/GhlLiN16zZ

It was 11 below zero this morning in Des Moines but that didn’t stop Peter of Des Moines’ Beaverdale neighborhood from running to work in Windsor Heights in shorts and a t-shirt. Brrr. pic.twitter.com/fnErKQUFTT

But although we’ve had temps hovering around zero for an entire week already, I’m personally more than a little excited for this weekend’s subzero plunge, and for all the wrong reasons. Because although it’s been cold in N’West Iowa lately, it’s not quite cold enough for me to freeze boiling water into snow.

And I really want to.

If you haven’t seen this trick already, a quick Google search of “freezing boiling water” will turn up photos of boiling water turning to snow and ice crystals in a split second after being tossed into the air on an extremely cold day.

Perfect weather 2 have some cold weather fun. The #mpemba effect is pretty cool science experiment where the cold weather will actually freeze Boiling water instantly when thrown in the air. Try this with cold water and well you just get soaked. #weather #science #polarvortex pic.twitter.com/NwlJ3VzcWX

This fast-freezing phenomenon is called the Mpemba effect, where water vapor emitted by very hot water meets cold dense air and condenses quickly into ice crystals. A better breakdown of the science behind this effect, as explained by University of Minnesota climatologist Mark Seeley, can be found in this 2011 article by Livescience.com.

I threw a cup of boiling water into the snow earlier this week, but as cold as it was (-2 degrees) all I got a puff of icy steam for my efforts. Not the fast-freeze of snow I was waiting for.

You need very, very low temperatures, around -25 degrees, for this phenomenon to work.

I anticipate boiling two cups of water of water at around 10 p.m. Sunday night. One to throw in the air out in the cold and the other to make a cup of hot chocolate to warm up with after.

Take 5: Where can Tom Brady win next