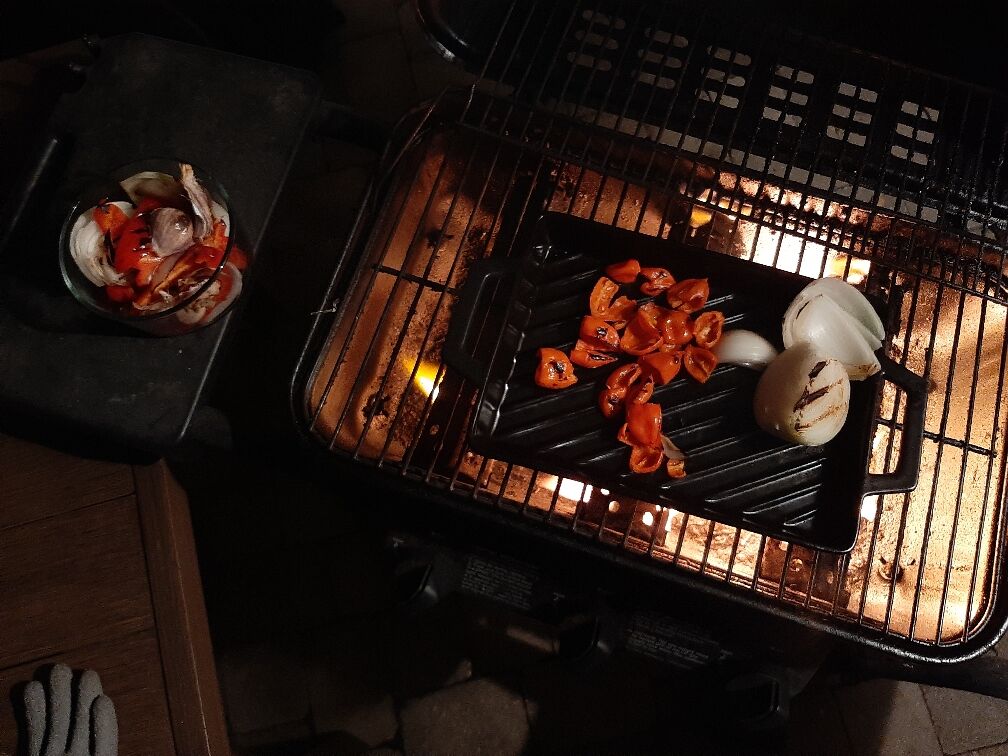 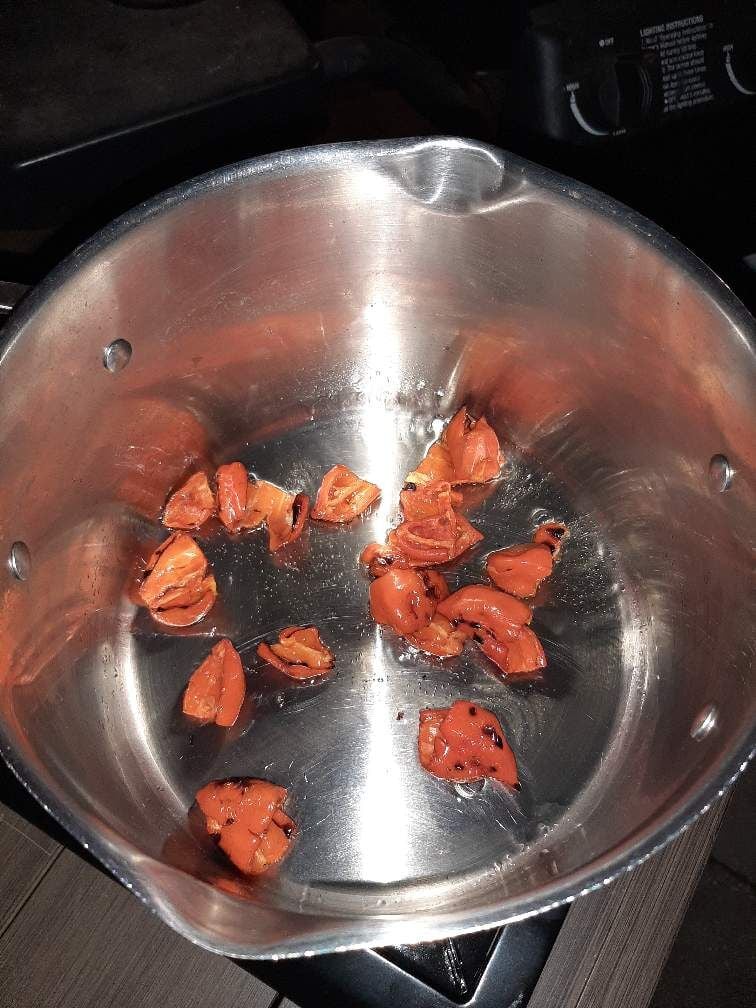 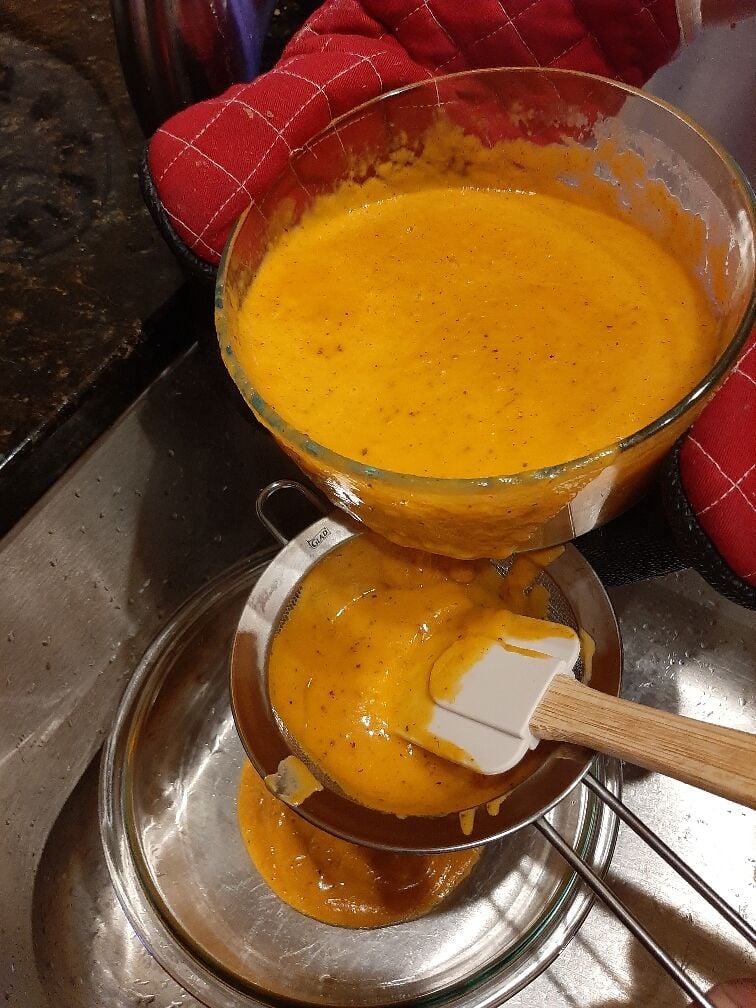 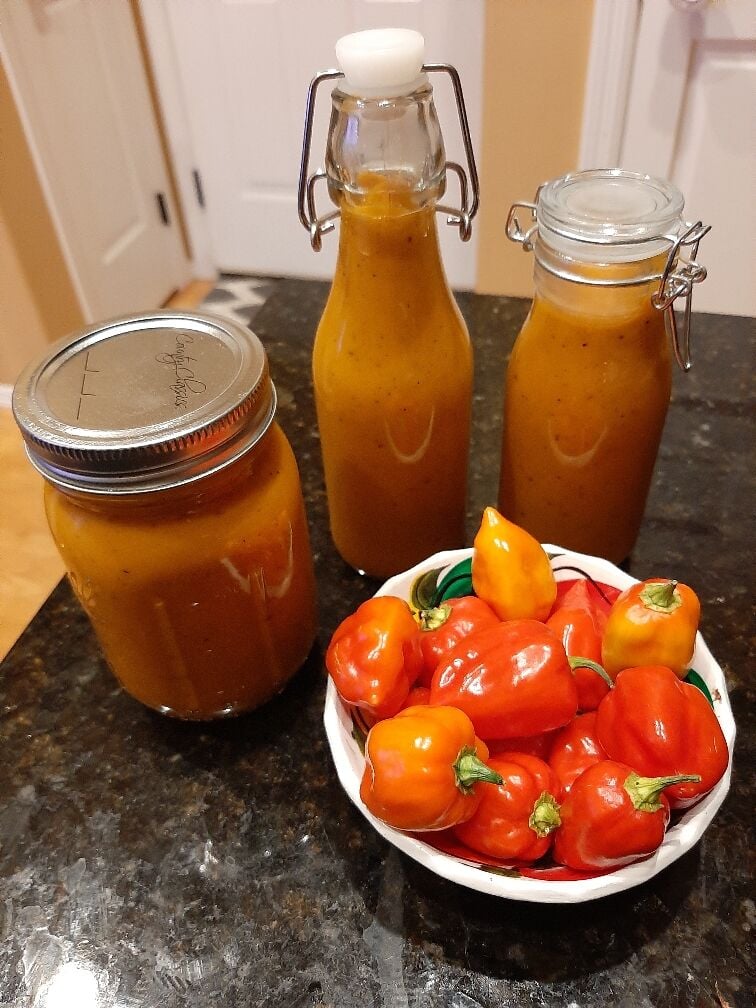 We've officially got plenty of heat to see us through the coming winter.

In addition to a large batch of hot salsa recently canned, and around 100 serrano peppers stores in the freezer, we found a use for all those habanero peppers in the backyard.

I spent a couple evenings scrolling through dozens of recipes online as well as watching cooking videos on YouTube and decided to combine a couple different approaches into what I thought would work best for us.

There were a couple consistent notes in every recipe - wear gloves and have plenty of ventilation.

Unused gardening gloves would provide plenty of protection while slicing the peppers and with our grill, a portable camping stove, and Ninja blender we could do everything outside.

After waiting Bennett to go to sleep for the night and thus avoid any incidental contact with the peppers, their seeds, or the spicy fumes, we put the plan in motion.

I sliced the habanero peppers outside and removed the seeds outside.

What I didn't know was that she had grabbed the knife I had been using when she came outside to check on my progress.

That was our first run-in with the habanero heat.

After slicing a mango she had decided to take a bite. Oops. The heat kicked in pretty quickly and we knew this could get interesting if we weren't careful.

Everything was then roasted on the grill then sauteed in a stock pot on the camping stove. After adding some vinegar, lemon juice, sugar and salt, the concoction simmered for about half an hour.

My heat check moment came while stirring the mixture.

After getting whiffs of the peppers while they sauteed I knew to keep clear of the stock pot as much as possible, but every once in awhile the wind would gust and change directions and I couldn't dodge out of the way quickly enough.

Once everything was cooked through it was time to blend it all together.

Since Bennett was asleep this point and the patio is right outside his window I took the stock pot and Ninja blend to our shed.

At some point while the Ninja did its noisy work I wondered what the heck the neighbors thought was going on in our backyard.

Once it was all blended together it was into the kitchen to strain any of the chunkier parts out and bottle it up.

April volunteered for the initial taste test and in the moment of truth gave a resounding two thumbs up to the final product.

I think we were both a bit skeptical at first so it was a pleasant surprise.

In fact, it turned out so well we made a second batch a week later.

Take 5: Summer of the Smoker