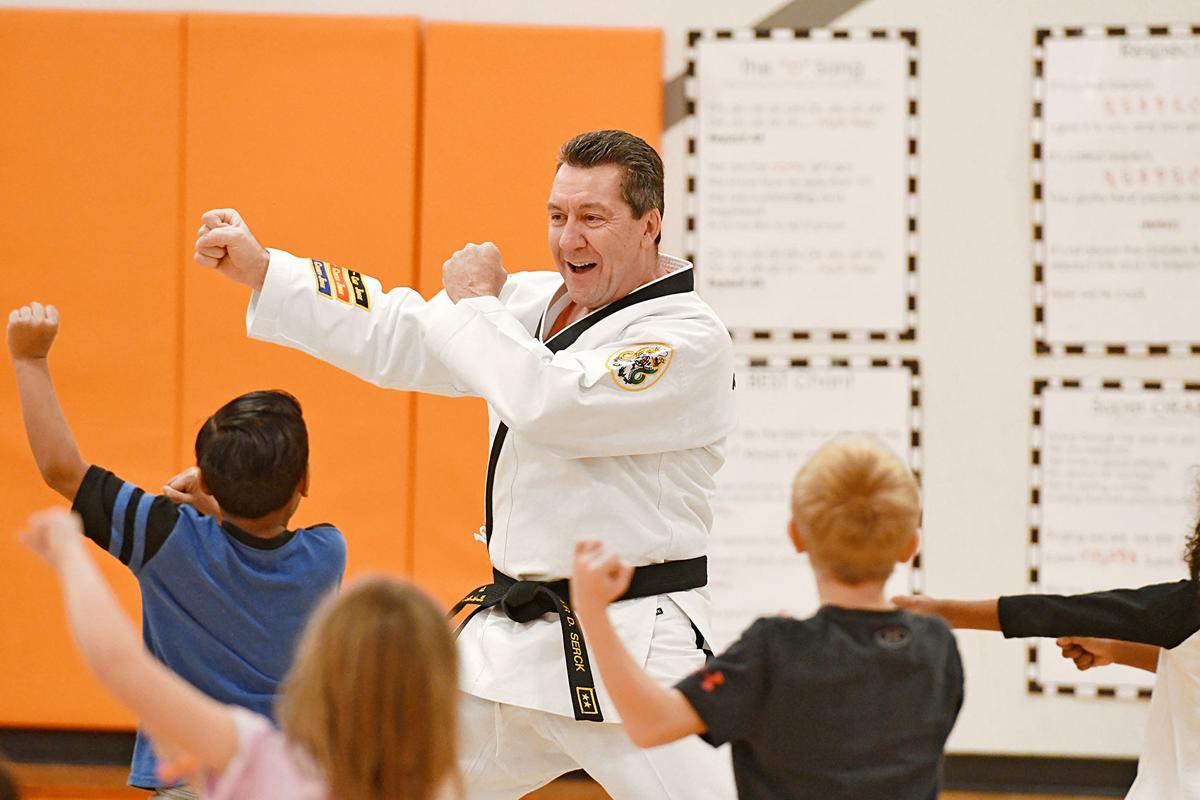 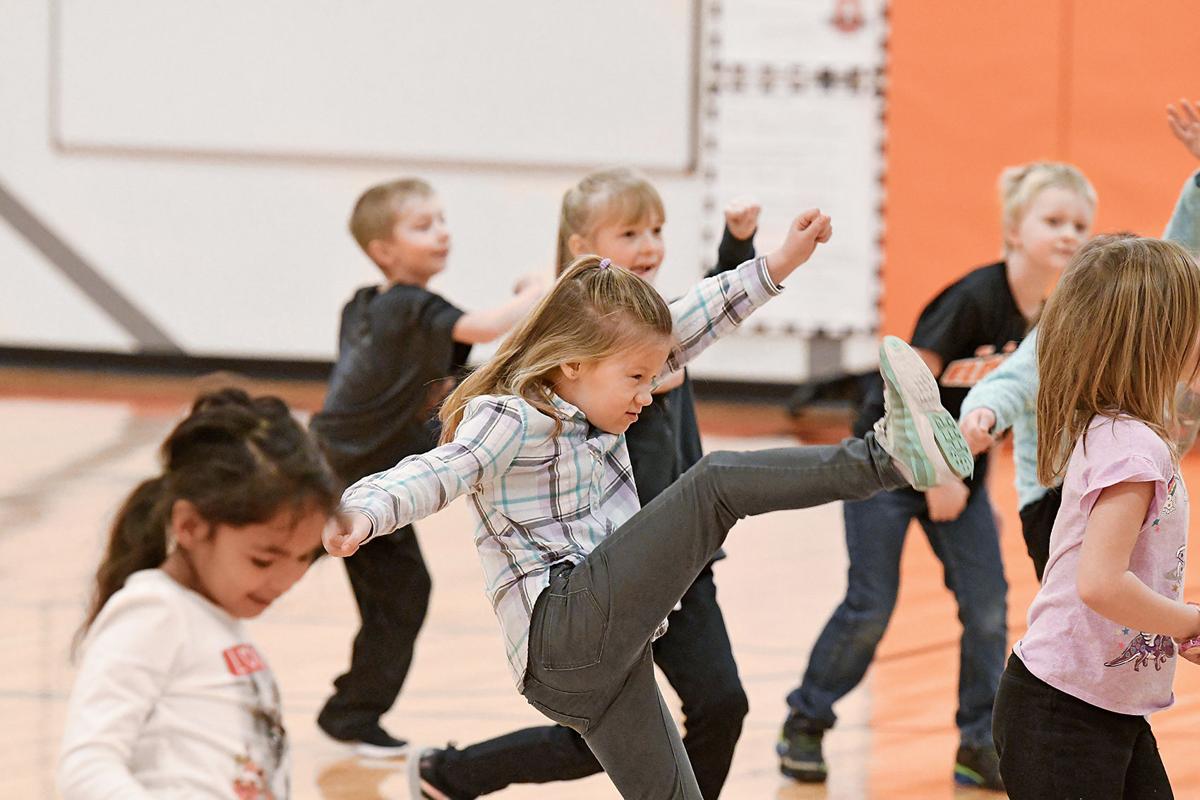 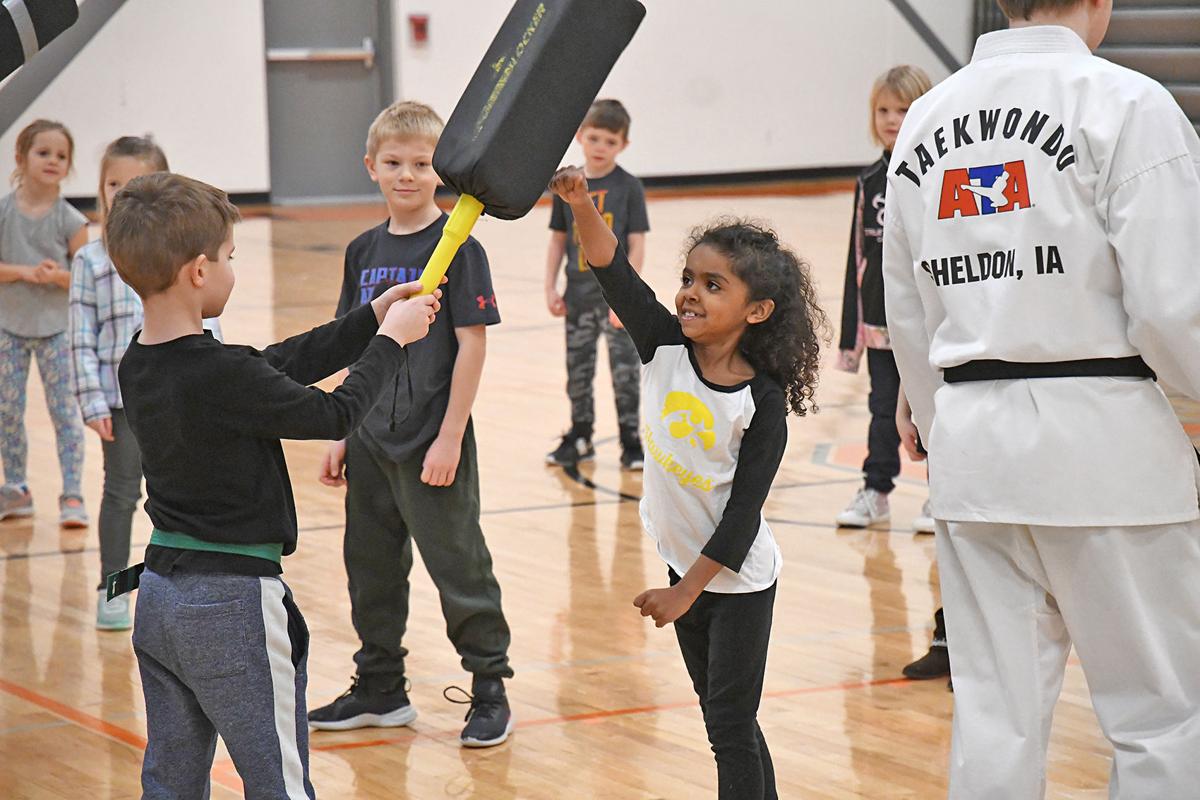 SHELDON—Taekwondo has had a stronghold in the Sheldon community. The Sheldon Taekwondo Club teaches students from 4 years old through adulthood about discipline, respect and confidence.

While the reputation of the club remains strong, it is combating shrinking participation, particularly in adults.

Seeing the connection between students that practice taekwondo and performing well in physical education class, Sheldon elementary school teacher Kyle Zankowski saw an opportunity to get his classes active outside of school.

Bob Jager and his daughter Jodi Vermeer started teaching taekwondo at Courtyard 24/7 Fitness & Tanning in Sheldon in 2000 after owner Greg De Jong added on space especially for the Sheldon Taekwondo Club. The club is a part of the American Taekwondo Association.

Vermeer trains the Tiny Tigers, which are 4-6 years old. Naturally the mother of four trains her own children.

“My daughter, she could memorize her whole form at 5 1/2,” she said. “That’s what’s great about taekwondo. They can all do it.”

Taekwondo is like a family business for Vermeer, but the same can’t be said for Master Dave Serck of Sioux Falls, SD. Serck is a sixth-degree black belt and has been training in taekwondo for 38 years. He leads taekwondo classes in Sheldon as well as Sioux Falls and Canton, SD. Jager was one of his instructors, but getting into taekwondo was not always easy.

“Doing taekwondo was something I always wanted to do as a kid,” Serck said. “I remember seeing a commercial on TV. I go in the kitchen, ‘Mom, mom, mom, I want to do karate. My mom says, ‘No. Too far away, too expensive and you won’t stay with it.’”

When he was 21, Serck recalls spotting a martial arts school while driving through Sioux Falls. Still wishing to train after all those years, he entered the school and signed up for a year of lessons.

“My first lesson was in blue jeans. Tight blue jeans back then. They didn’t have a uniform big enough for me,” he chuckled.

After about a year of training he earned his red belt. Then his black belt. Eventually he was asked if he would be interested in joining the trainer/instructor program. That is when he fell under the tutelage of Jager.

“When I first signed up, my mom was not happy with me,” he continued. “She thought I’d joined a cult. My dad served in the Korean War. He saw the Korean flag. That didn’t bode well with him. Between the two of them there was a lot of animosity toward me being in taekwondo. That was a big negative, but I stayed with it and they started to warm up to it after years and saw the benefit of it.”

Students at East Elementary and Sheldon Middle School recently had a taste of taekwondo. Serck brought a session to every class from kindergarten to sixth grade on Jan. 3-7.

He led 25 classes and reached more than 400 students.

Serck was assisted by Kyle Peterson, 21, of Sheldon, who is training to become a taekwondo instructor.

“I am always looking for ways to get students active outside of school and I thought bringing in Master Serck would be a great way to get students excited about it,” Zankowski said.

During the classes, Serck walked students through form, performing kicks and punches, blocking and — most importantly — belting out a strong shout.

“I told them, ‘If the principal comes down and tells us to be quiet, I’ll take the heat for that,’” Serck said. “In one class the principal did come in and hold the target pad. That class was off-the-chart loud.”

“How many times can students get the chance to kick a teacher?” Zankowski said. “The students had a blast.”

Zankowski’s goal of generating interest in taekwondo and other activities seemed to have an effect as Serck and Vermeer’s phones have been ringing ever since.

“Taekwondo is a great way to build muscular strength, cardiovascular fitness, bone strength and hand-eye coordination,” Zankowski said. “One of the examples I gave the students was, ‘Would you rather do a bunch of squats to get stronger, or kick the pad that I am holding.’ Every student responded with, ‘Kick the pad!’”

Zankowski said he is open to bringing taekwondo to class again, and would like to find more opportunities for students to learn about other activities they can participate in.

Taekwondo’s benefits stretch beyond physical fitness according to Vermeer and Serck. The Tiny Tigers focus on a several life skills during their sessions, including:

“Every session we focus on a different life skill,” Vermeer said. “We try to have them incorporate it into their lives.”

Being one of the life skills taekwondo students learn, it should be no surprise that Serck and Vermeer observe an increased level of confidence coming from them.

“Mrs. Vermeer here builds kids up. They start putting their shoulders back and they hold their head up and they believe in themselves,” Serck said. “Just imagine what it would be like if kids in sports or in band or debate, whatever activity they’re in, if they believed in themselves.”

Impacting children is what Serck and Vermeer said drew them toward becoming instructors.

“I see the difference it makes in their lives,” Vermeer said. “My dad always said we have this 45 minute window to bring something positive into their life and teach them life skills that will last their lifetime. That’s why I do it.”

Participation from children is still going strong for the Sheldon Taekwondo Club, but overall numbers have decreased.

“When we started we had over 120 students. Now our numbers have really gone down,” Vermeer said. “That’s in part because we had a lot of adults too. It seems like adults aren’t active anymore. Adults are too busy with their own kids’ stuff. They don’t have time for their own hobbies.”

The club takes in new students every two months. The classes practice for eight-week periods, then test for their next belts. The club will take new students on Jan. 21.

Proving he is elite: Hunter Dekkers

Classes are held on Monday nights at the Courtyard, located at 315 N. 18th Ave, Sheldon.

Athlete of the Week: Kallyn Stumbo

Athlete of the Week: Dao Keokhamthong