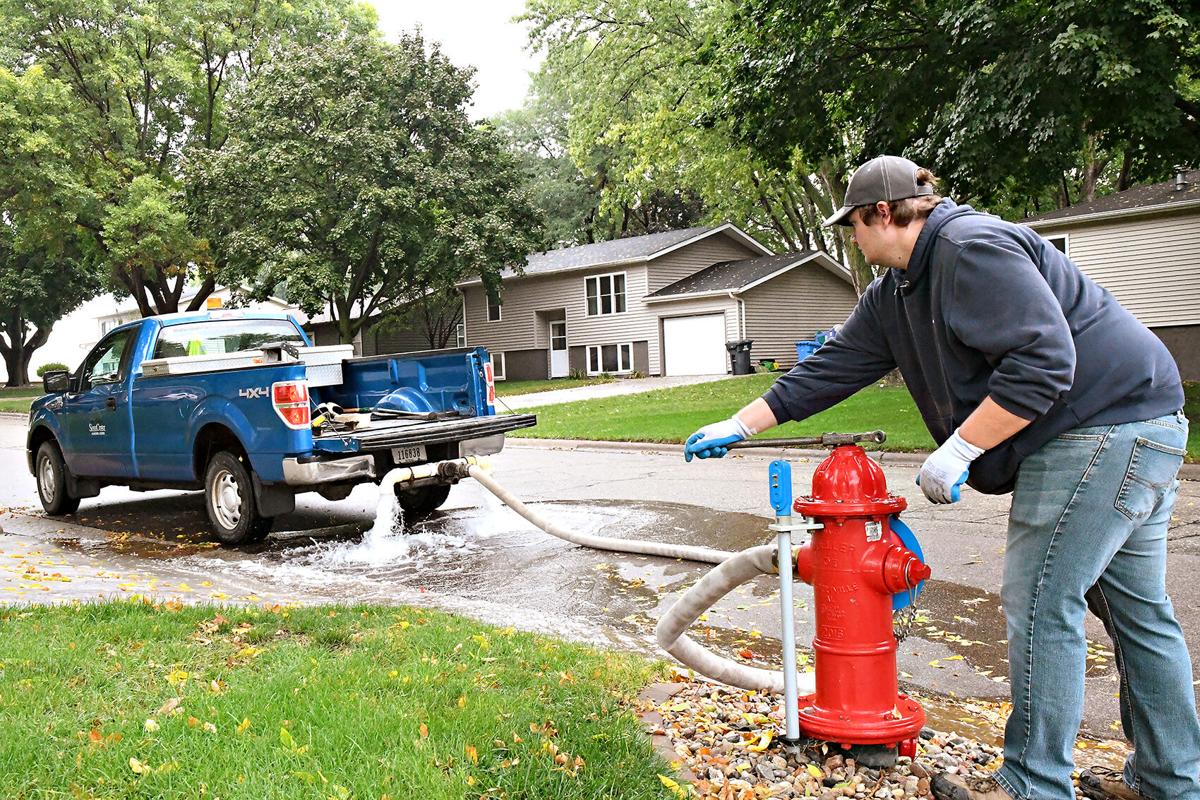 Sioux Center water distribution technician Zach Boneschans flushes a fire hydrant by Tower Fields in Sioux Center on Thursday, ensuring that it properly functions. The city inspects its hydrants in the spring and the fall to ensure they’re ready for use in an emergency. 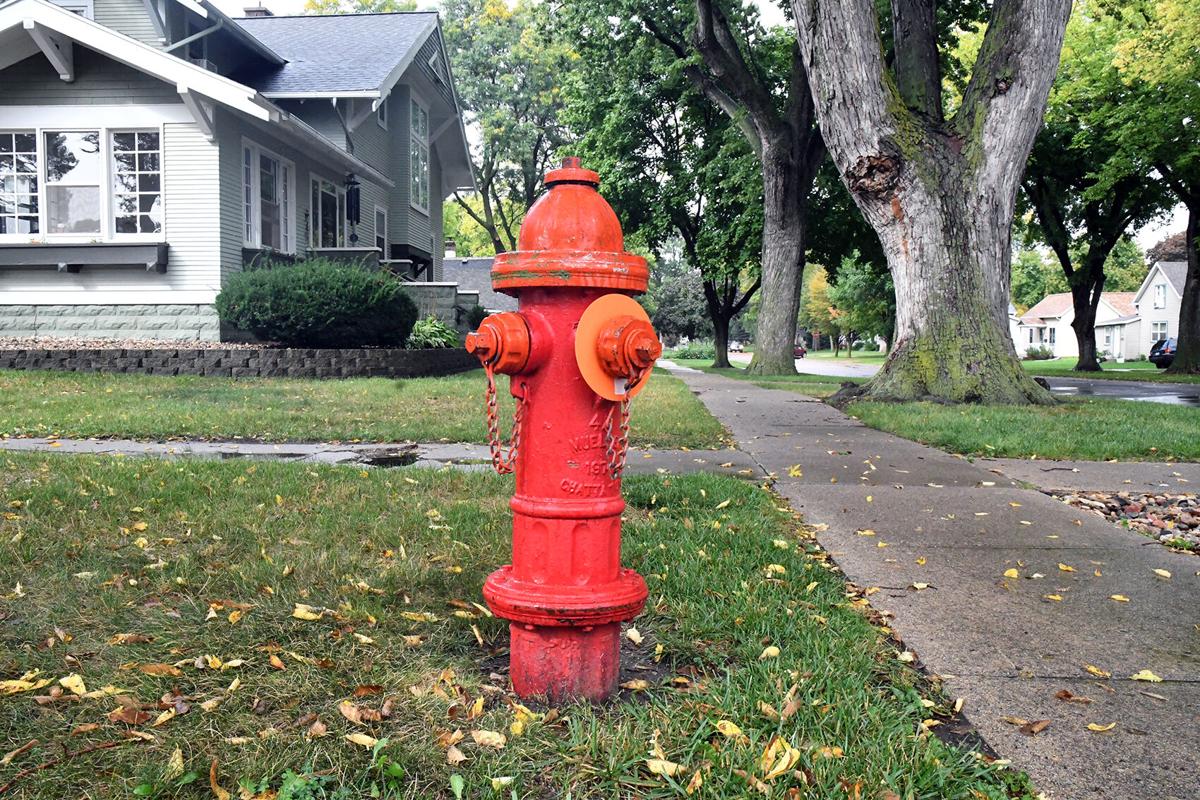 An orange cap and ring around a nozzle provide Sioux Center firefighters with a quick way to know how many gallons per minute this fire hydrant can provide them. This color-coded system has been in place for about 20 years.

SIOUX CENTER—You don’t have to be a dog to take an interest in fire hydrants.

As old of a fire fighting technology as they are, they continue to be the central component for responding to most fires, though they have continued to improve through the years.

All fire hydrants feature a red main barrel, but each hydrant in Sioux Center also sports a colored ring around one of its nozzles that means something, according to Sioux Center Fire Department captain Dale Vander Berg.

Firefighters have even come up with a pithy phrase to succinctly recall what the colors mean: blue is best, green is good, orange is OK and red/silver sucks.

Sioux Center residents with a silver- or red-ringed hydrant nearby don’t need to worry, though; even silver hydrants put out enough water to handle a house fire.

“Those have been adequate enough to fight many fires over many years,” Sioux Center Water Department supervisor Harlan Kruid said. “Our new standards just bring us to a higher level.”

It’s national code cities are not required to follow, but it is strongly encouraged and cities that do implement it see improved insurance rates, Kruid added. Sioux Center has incorporated the color coded system for about 20 years.

There are 401 fire hydrants in Sioux Center’s water system, Kruid said. There are more hydrants within the city, but the rest are privately owned and maintained and so are not included among the 401.

“All the newer stuff we put in is blue or green,” Kruid said. “We just didn’t use as much water back in the day — houses were smaller, businesses were smaller and it didn’t take fire flows that it takes today. Now whenever we replace pipes, we replace them with bigger sizes.”

That’s what Sioux Center will do with the upcoming Highway 75 redesign project. As part of that project, the city will install two 8-inch pipes along either side of the highway, which will allow the fire department to better access multiple hydrants without having to lay hose across the highway.

The practical effect of the colors is that it quickly tells firefighters arriving at the scene of a fire how much water they have to work with and if an additional source might be necessary.

And if firefighters need to use multiple fire hydrants, it’s important they don’t use hydrants that are on the same pipe, as trying to draw too much water from the same pipe can reduce the effectiveness of both hydrants; there’s not enough water to adequately supply both at once.

“Because of this, on every fire truck, every pumper, we have 800 feet of large diameter hose,” Vander Berg said. “Then we can go two to three blocks away and get water to try to get to a different main, a different set of hydrants so that we don’t steal from Peter to pay Paul.”

Firefighters these days have an easier time of quickly locating fire hydrants, too, thanks to software accessible on their phones. That especially comes in handy if they’re responding during the dark or if there’s landscaping obscuring a hydrant.

Because of the important role of the fire hydrant, the city regularly maintains them and goes through a checklist and flushes them with water twice a year: once in the spring and once in the fall. Like any other mechanical device, if it sits unused for too long, it runs the risk of developing problems, such as valves seizing up or water not draining properly from the hydrant after use.

“We want to know that everything is working properly so that when an emergency does come up, we know that the hydrant is functional,” Kruid said.

These checkups do uncover some interesting problems sometimes, such as the occasional instance of vandalism or even a clear case of a hit-and-run.

Hydrants are designed to break cleanly from the underlying pipe when hit by vehicle. The traditional Hollywood image of a gushing tower of water doesn’t happen with these hydrants, however, as the water valve is located about 6 feet underground, protecting it from car accidents and allowing for an easier replacement.

“This was quite a few years ago, but the guys went out to the spring maintenance and somebody had hit a fire hydrant and never called it in,” Kruid said. “It was actually sitting loose on top of the pipe and wasn’t attached. Somebody ran it over, set it back and made it look nice, but it was not functional. Without a maintenance program, it would have taken a fire to find that. A fireman would have rolled up and said, ‘I’ve got nothing.’”

The Sioux Center Fire Department is hosting an open house 5:30-7 p.m. Thursday, Oct. 7, at the new south fire station, 1510 S. Main Ave. The fire department will be serving hamburgers and hot dogs in honor of National Fire Prevention Week, Oct. 3-9. The community also has the opportunity to tour the station.

The new 7,200-square-foot, four-bay structure can accommodate four engines and is tall enough for the fire crew to work on the engines indoors. Next to the engine bays, a gear room holds firefighting gear in open lockers, ready for firefighters to respond to a call. In-station technology keeps the crew in communication and informed of each other’s availability and location when a fire call comes in. In the rear of the building is a wash bay for the fire engines. A water storage tank below the building holds rainwater for use in washing the trucks.

The front, south room of the station features a museum to house the department’s 1931 REO fire truck and other vintage fire gear. In front of the building is a tribute to all firefighters who have served throughout the Sioux Center Fire Department’s history. It is also a tribute to those who died while actively serving on the department: Wink Huisman, Brad Brommer and Jason Van Holland. It features an emblem in the paving stones and a bench near the flagpole. It was designed by local firefighters.

The new station replaces the old Station 2, which was made up of two garages with only three stalls and very tight space. Together with Fire Station 1, in central Sioux Center, the new fire station equips the firefighters to continue to provide a highly rated level of fire protection for the community.

SIOUX CENTER—Take Todd Zuidema’s word for it: There’s not a flood of demand for solo tuba performances in the Sioux Center area.