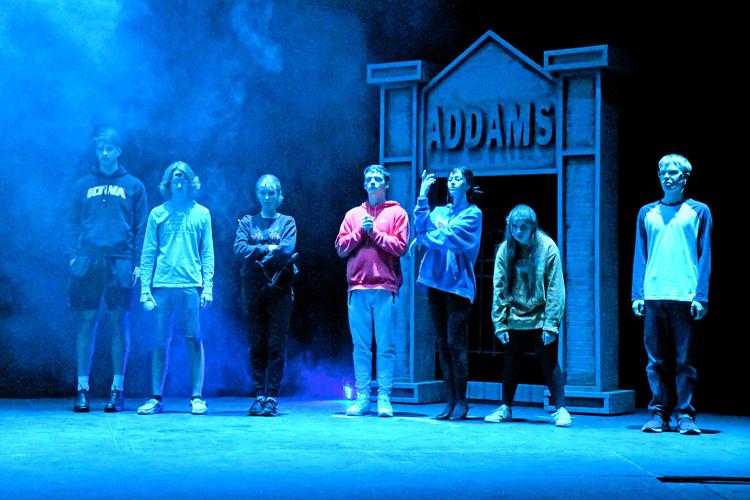 The main cast of the Sioux Center High School production of ‘The Addams Family’ line up in the family graveyard during rehearsal Monday. 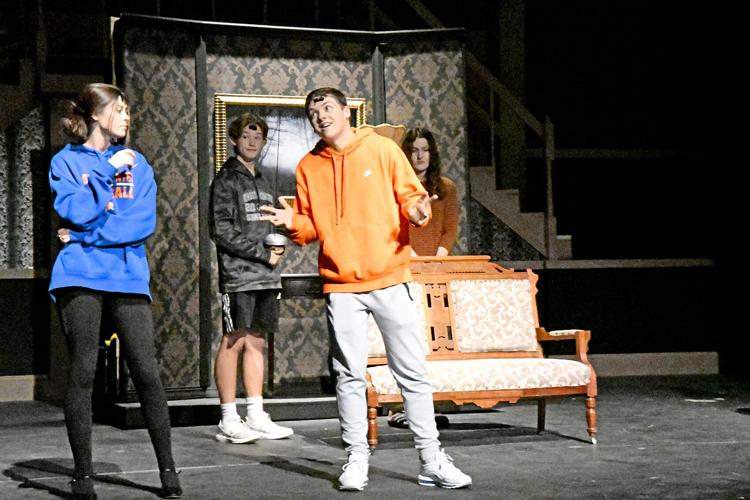 The main cast of the Sioux Center High School production of ‘The Addams Family’ line up in the family graveyard during rehearsal Monday.

“‘The Addams Family’ was the most popular musical produced by high schools in the 2019-20 school year, so it caught my attention back then,” said director Gretchen Bruhn. “Last spring we produced ‘Newsies,’ so I was looking for a show that was different from that. I also always consider the current students, and try to find a show that fits their abilities.”

Through the musical version, the Addams’ daughter, Wednesday — played by Kate TeStroete, has fallen in love with the most normal boy ever, Lucas Beineke — played by Abe Hibma. Wednesday arranges for Lucas and his parents to attend a family dinner at the Addams’ home, hoping that her family can be “normal” enough to impress the Beinekes.

“As the most ordinary family visits the upside-down world of the Addams family, what could possibly go wrong,” Bruhn said.

A main difference from the original TV series to the musical is that the musical does not include Cousin Itt or Thing.

Students have been rehearsing for the production since Sept. 9.

“I’ve enjoyed that this show has a small main cast, which makes scheduling easier,” Bruhn said. “The main cast is composed of all veteran actors, also, which has really created a great chemistry between them. These students work very hard, and they are very much a pleasure to work with. The script is silly and offbeat, which the students and I find to be quite funny. I also think that the roles have challenged the students’ stage character development skills.”

She said the No. 1 challenge is always time.

“Students are extremely busy, and all of them have other activities and commitments,” she said. “Our limited rehearsal times are also later in the evening when kids and adults are tired.”

Because the high school also shares TePaske Theater with Dordt University, students were not able to practice in the space until Oct. 25, giving them just three weeks to build the set, program the stage lighting and sound and rehearse. Though it was a short amount of time, Bruhn said the students transitioned well.

Bruhn designed the set using inspiration from the set design of other productions. The Addams Family set includes the interior of a grand mansion and two outdoor spaces, a graveyard and a park.

“Having multiple scene locations is challenging,” she said. “Not only is it more to build, it requires me to figure out transitions that are smooth and timely.

“Once again, I’m so thankful that Mr. Doornenbal and his industrial tech students are willing to help build the majority of our set. We rented our costumes from a company in California, and some of the unique props were rented from a company in New York City.”