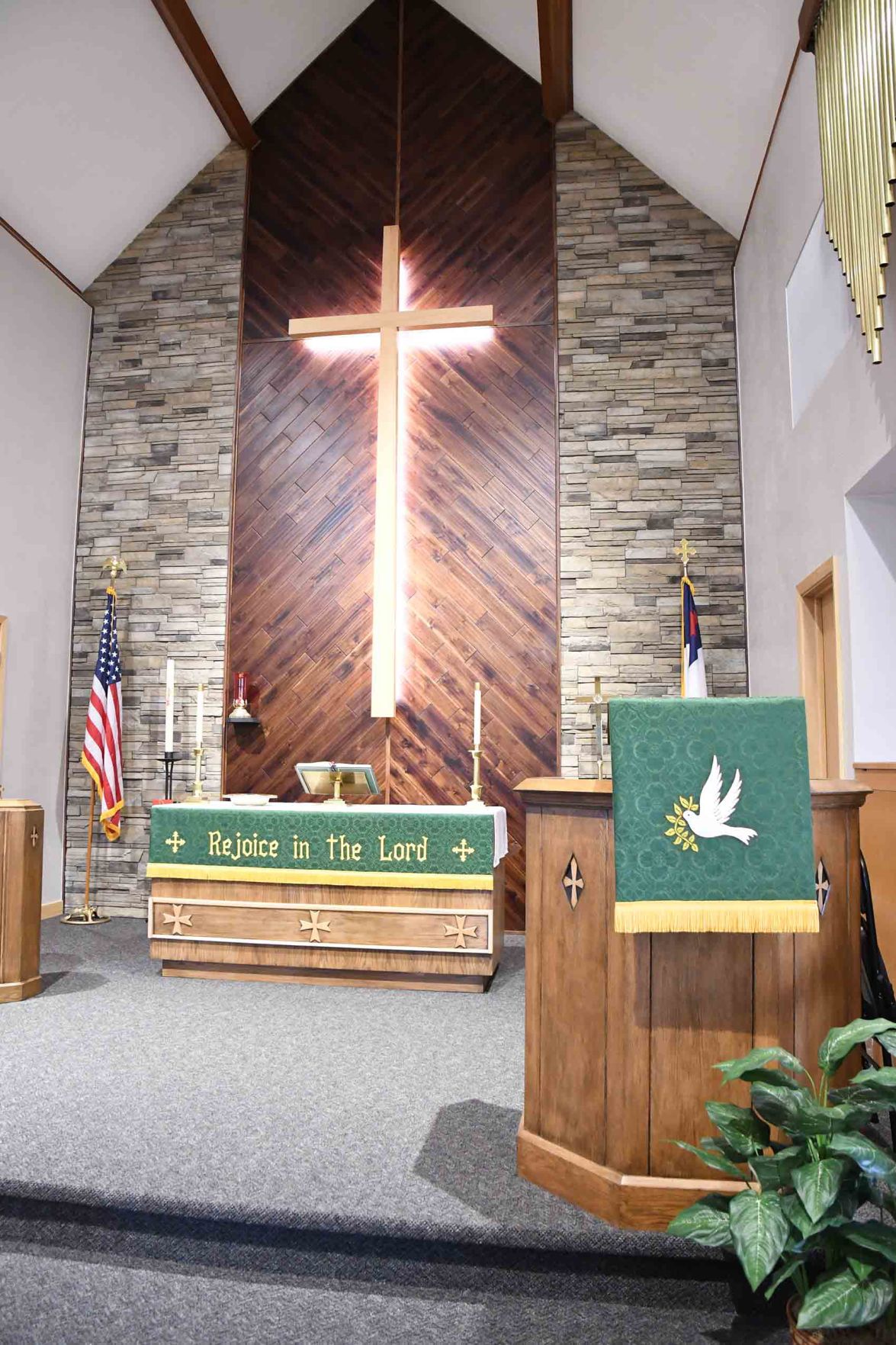 Work at the church, including new carpet and refinishing the furnishings, was completed at the end of July. The furnishings were rededicated Sept. 15. 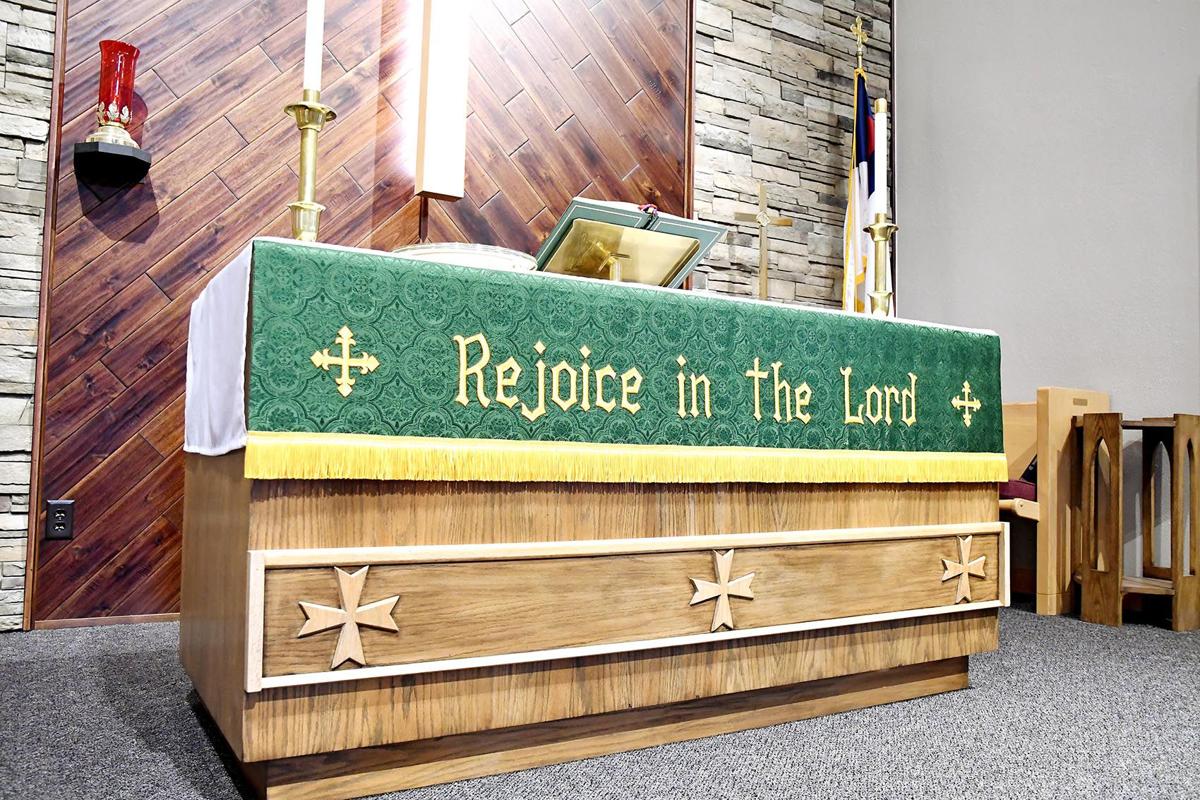 The church’s altar was refinished. It also made use of part of the now-unused structure that had held up the curtain behind the cross, adding a bar with three crosses to the altar. 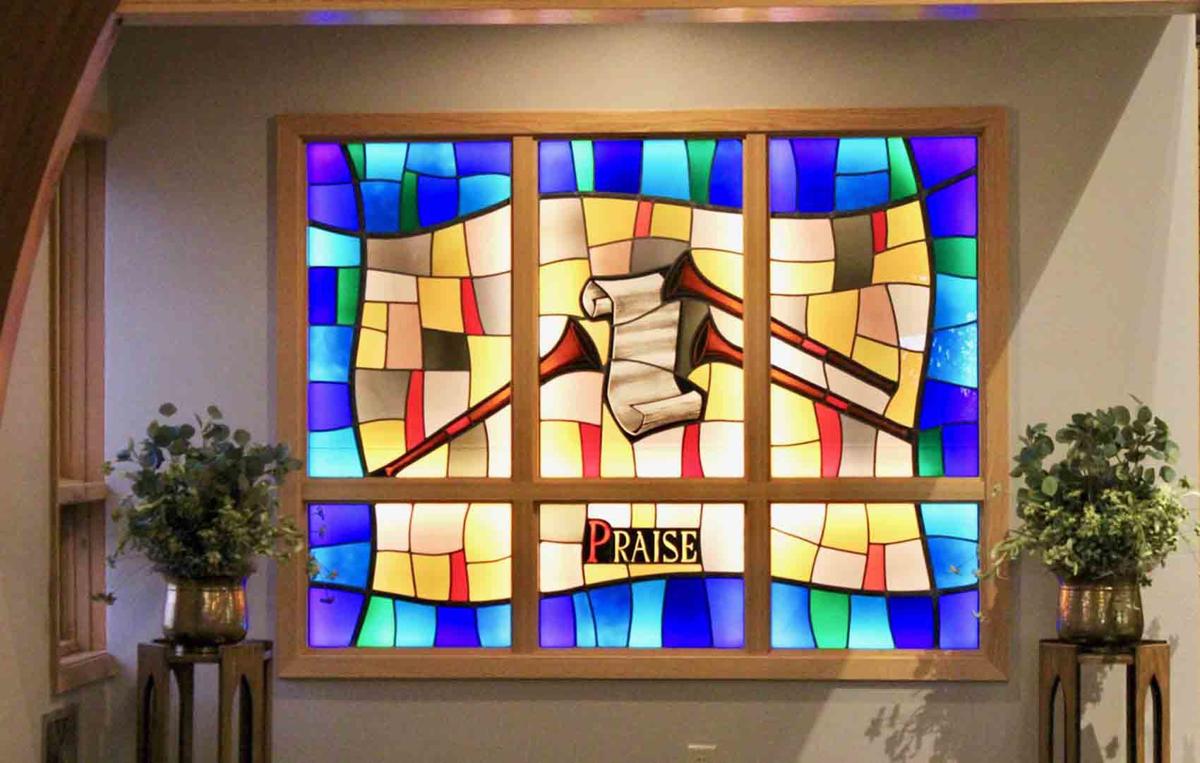 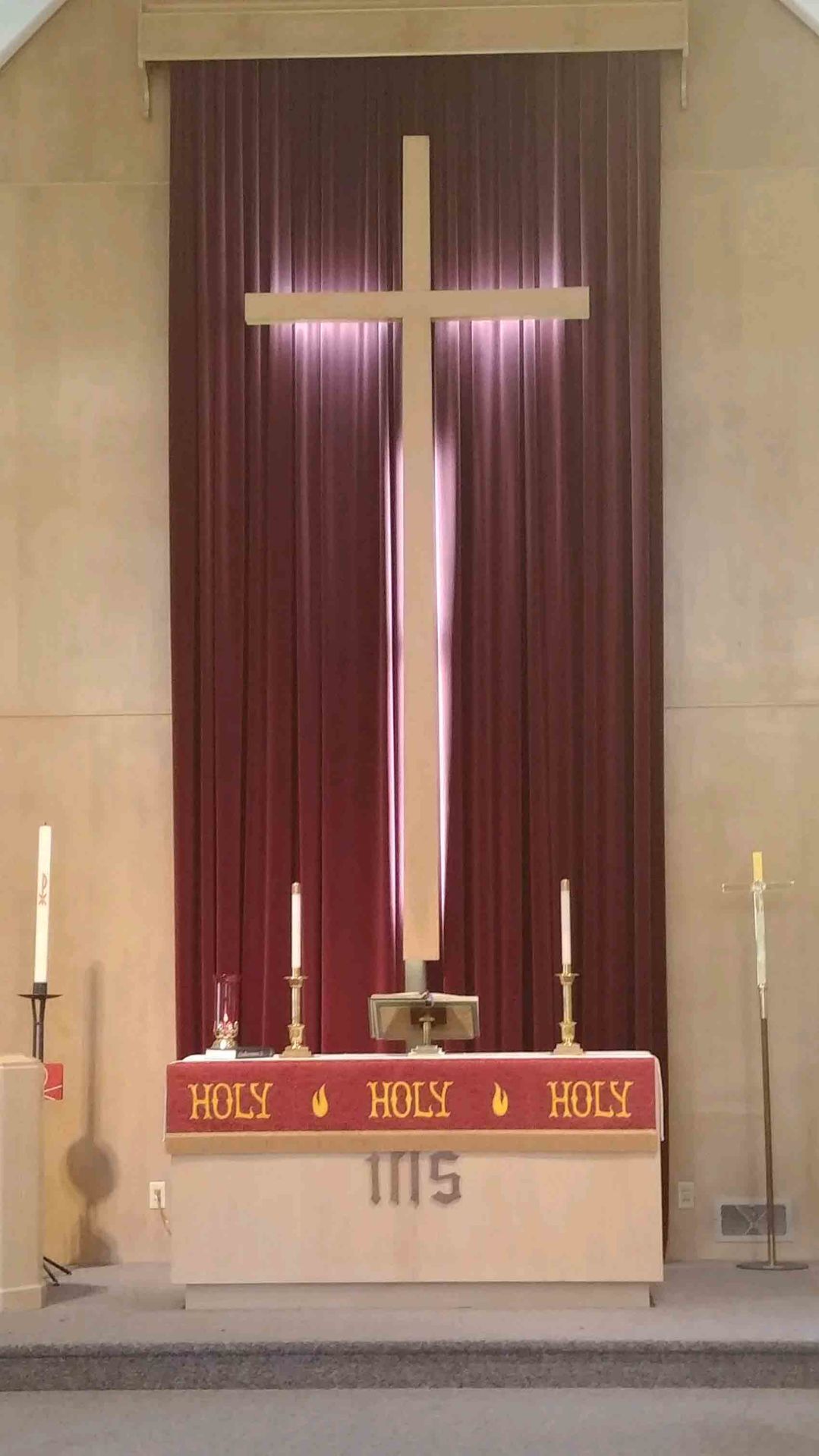 Before this summer, the furnishings at the front of Peace Lutheran Church were a pale color, and a curtain hanged behind the cross.

Starting in July, about a month’s worth of work happened at the country church located about seven miles west of Sioux Center, with special furnishings removed, a stained-glass window moved, spaces added or changed and new technology brought in.

According to Pastor Bill Loefke, at the start, there had been discussions about ordering new furnishings for the front of the church — the cross, altar, pulpit, lectern, baptismal font — but church leaders ultimately decided against it, opting to have their existing furnishings refinished.

Part of the reason for that was because of the expense involved in ordering new, but the history of their furnishings also weighed on their decision. A lot of them were made by a past church member for the church.

The pieces were brought to Brenda Van Dyke to be refinished, and Loefke said the church has been happy with the results.

“It’s always a little weird when important furnishings leave the church. It’s celebratory when they come into the church, but it’s weird when the focus, that massive cross, came down,” Loefke said.

Although he was worried about how long the church might be without its cross, “slowly all the pieces came back.”

And they couldn’t be happier with the results.

The wood of the furniture had been bright, a bleached coloring. It was an old fashioned coloring, and some of the details, such as the engraved crosses on the font of the pulpit, were easily lost because of the single, bright color.

Thanks to the refinishing work, these details stand out better by having those details remain brightly colored and the rest of the wood a darker shade.

On the altar, a wooden strip with engraved crosses has been added. Even this piece isn’t entirely new. It had been part of the structure holding up the curtain that was hanging behind the cross. With no need for the curtain anymore, they managed to integrate part of it back into the altar.

The curtain had to come down because of it was too old and fragile to clean and repair anymore. In its place, dark wooden planks were put up at an angle, seemingly pointing to the center of the cross.

The sanctuary’s carpet was also replaced.

Loefke said that there were a few services where he was walking around on plywood, but he and the congregation pulled through it just fine.

Even the cross was taken down briefly to be refinished, and as it was installed again, the lighting behind it was redone. It’s now done with LEDs.

Although likewise not new, a stained-glass window that had been tucked away from the congregation’s sight by previous work was moved to a new spot.

When the church built a closet at the front of the church, off to the side of the sanctuary, one stained glass window was mostly cut off from the congregation’s sight, though it remained visible to anyone on the outside of the church or anyone who entered the room for supplies.

The stained glass window was moved to that storage room’s wall, facing the congregation. Because this meant that there was no longer any natural light to illuminate the window, LED lights were put in behind it so that it could still shine as well as any of the other stained glass windows lining the church.

That closet space now serves as the church’s sacristy, with the previous sacristy being remodeled and repurposed for use by a youth group.

There were also a number of technology upgrades made.

They’ve put in several flat-screen TVs around the church. They use it to broadcast church notices about events and activities, and in the sanctuary, it allows them to display song lyrics and readings.

This was a more practical route than using a projector, Loefke said, because TVs have cheaper maintenance costs and longer life spans.

“You want eye contact, you want people to have their heads up,” Loefke said.

Work on these projects took about the whole month of July. Construction crews were able to come in and work during the weekdays, and then on Saturdays, church members would get to work cleaning things up for Sunday worship.

“It was amazing to see everybody coming out and vacuum the floors and wipe things down, even way up high using mops,” Loefke said.

The rededication service was held on Sunday, Sept. 15.

“What I did was develop a paragraph for each piece of furniture,” Loefke said. “For example, the lectern, the pulpit, the baptismal font, the altar, and what is expected according to God’s word at these places. What is the altar about? It isn’t just a box. So, there were words and prayers at each of the furnishings.”

Peace Lutheran Church congregational president Steve Rehder started it with an opening statement, and then there were prayers said at each piece of furniture.

SIOUX CENTER—Dave and Cindy Dukes and Evelyn DeVos came to the Sioux Center City Council meeting Monday, Sept. 23, to talk about some drainage…