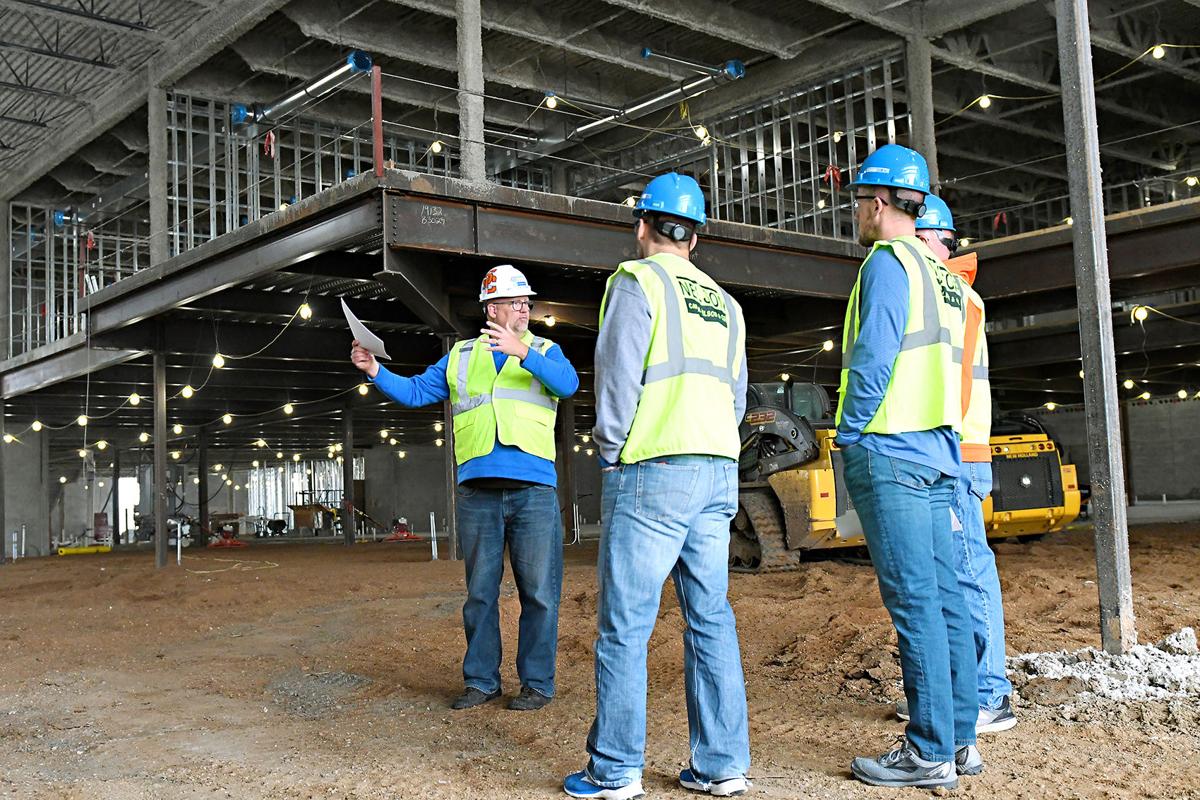 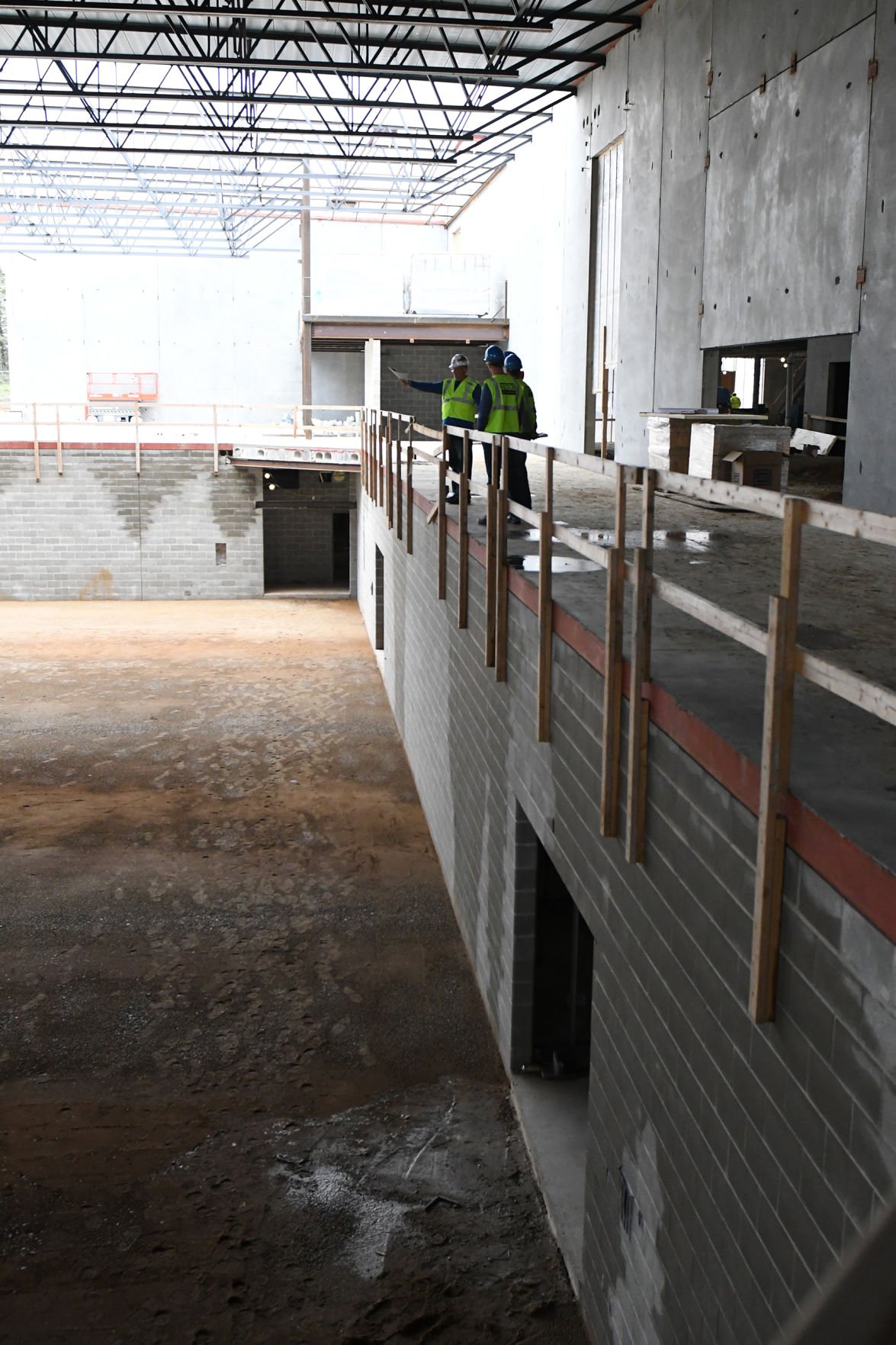 Sioux Center School District superintendent Gary McEldowney takes teachers Aaron Schmidt, Isaac Heard and Grant Vietor to the edge of the upper deck of the gymnasium at the new high school building during a tour. 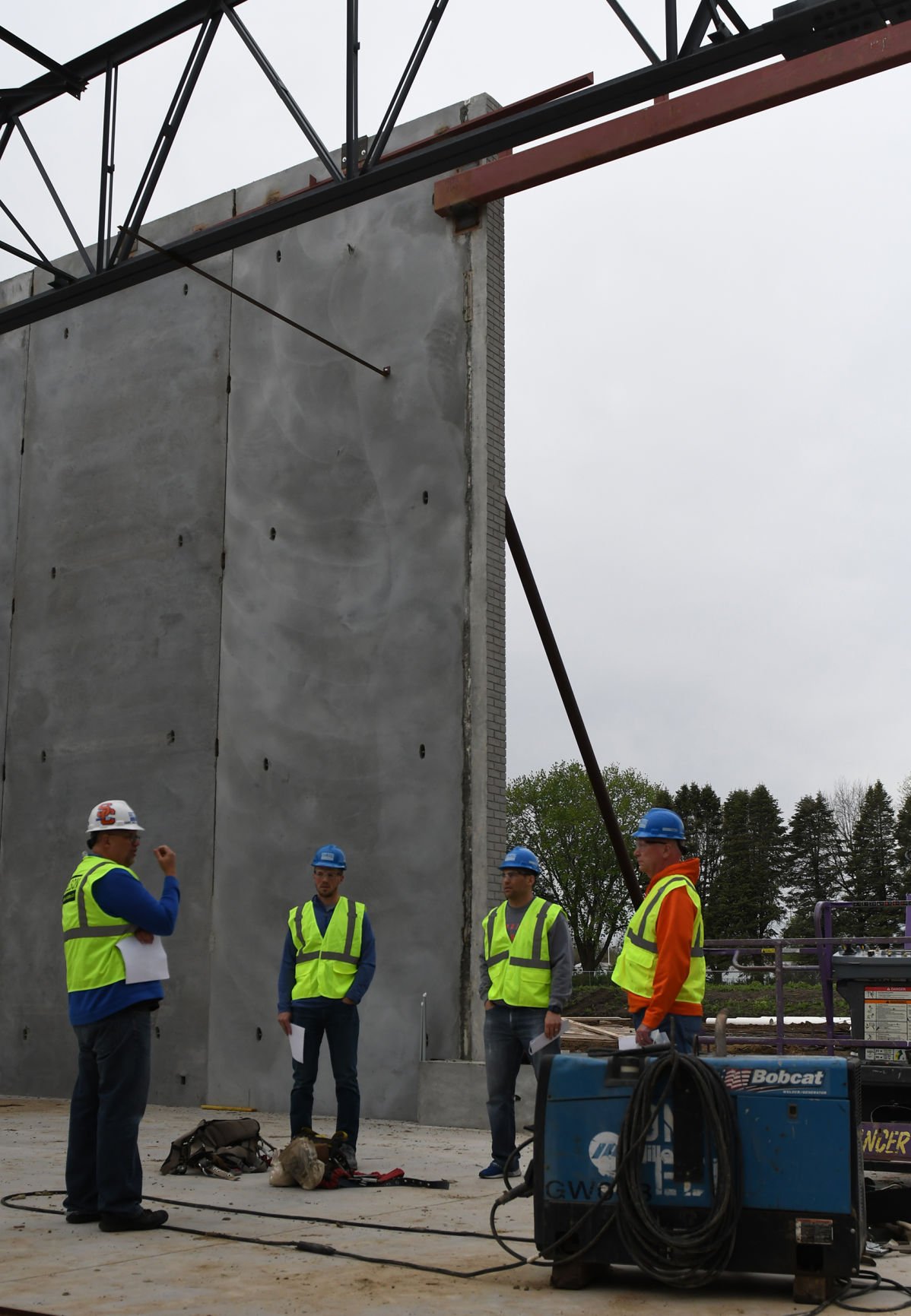 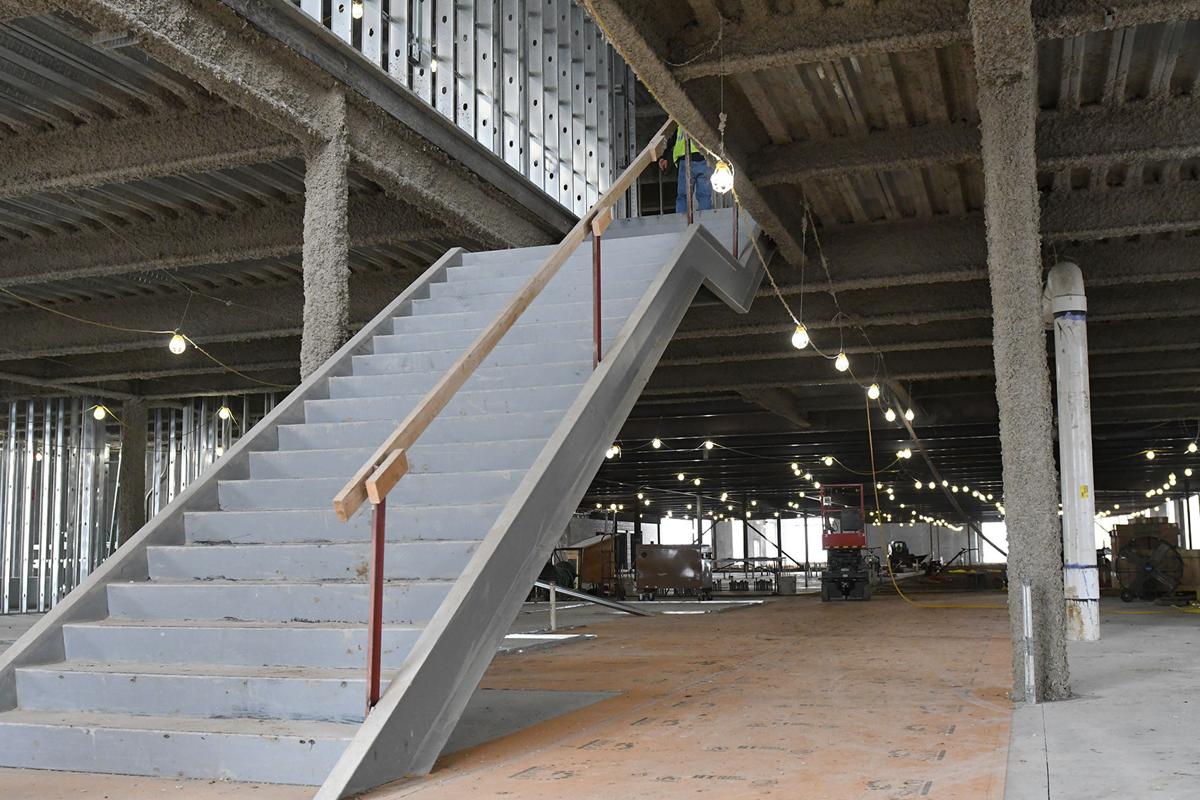 These stairs on the west end of the academic wing lead to the upper level of classrooms at the new high school building. With 26 traditional classrooms being built, there is space for an addition to the west so more class space can be added when needed. 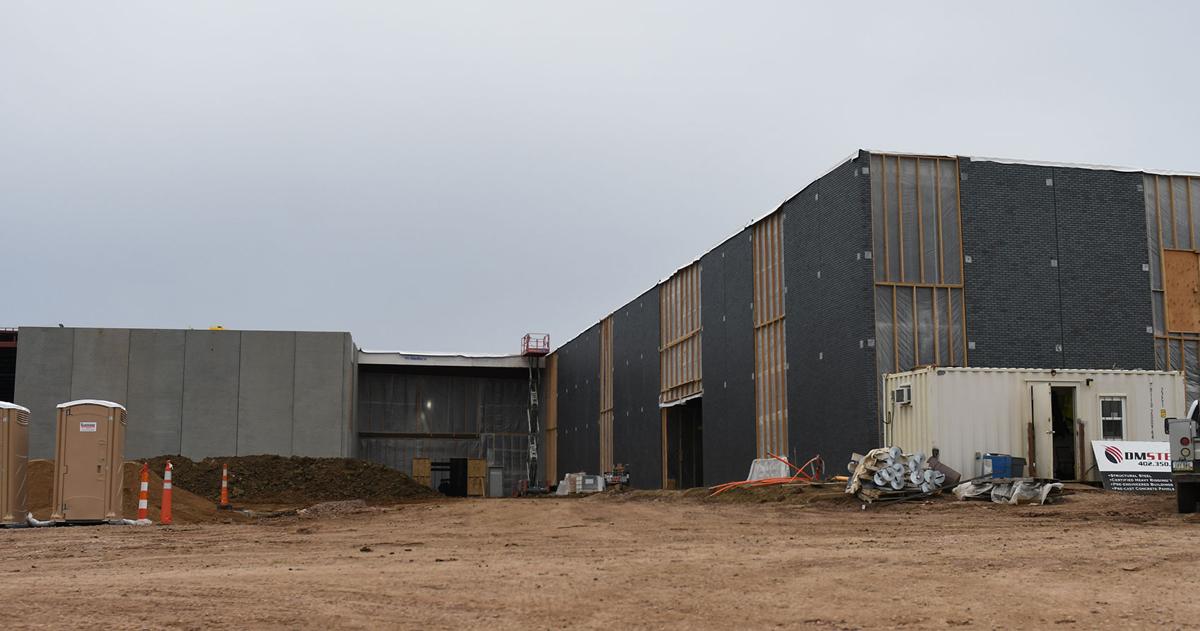 The exterior of the new Sioux Center High School building continues to take shape, with the roof  finished and work on installing the windows (where the plastic sheets are now) soon to begin.

Sioux Center School District superintendent Gary McEldowney takes teachers Aaron Schmidt, Isaac Heard and Grant Vietor to the edge of the upper deck of the gymnasium at the new high school building during a tour.

These stairs on the west end of the academic wing lead to the upper level of classrooms at the new high school building. With 26 traditional classrooms being built, there is space for an addition to the west so more class space can be added when needed.

The $42.9 million project has come a long way since its August groundbreaking, with exterior walls up and windows getting ready to be installed.

Throughout April and into early May, crews have worked to complete installing steel structures. The gym is nearly complete in that regards, with some pieces of steel for the roof still needing to be set in place, according to Carl A. Nelson & Co. project engineer Marcus DePalma.

At the educational space, work on the second floor’s interior stud wall framing has wrapped up.

“Now that the metal studs are all framed, we have the plumber, the electrician all doing their rough-in in the walls and ceilings. We even have the fire sprinkler guy on site starting to do some rough-in,” De Palma said.

According to Sioux Center School District superintendent Gary McEldowney, the academic portion of the building to hold 26 traditional classrooms that can handle 600 students, with the commons, science rooms, music rooms, offices designed to handle 800 students in the long-term.

The building is being constructed so that it can be readily expanded when more space is needed to reach that 800 capacity.

Next to the music rooms on the east side of the school is space reserved for a performing arts center, while on the west end where the classrooms are, there is designated space for a classroom addition.

All structural steel work for the building has been completed.

With the last bit of roof decking complete, crews have begun installing insulation into the roof of the gymnasium. That ought to be finished by the end of the week.

The company that will handle the installation of glass windows has arrived on site and will soon begin their work, namely building the frames for the windows at first.

“The final exterior look of the building will really start taking shape in the next month,” DePalma said.

Another area of focus has been concrete work inside and outside of the building. Exterior paving for parking lots will continue into June.

In May, they began removing the large dirt piles on the north side of the site, something DePalma said the neighbors can look forward to being rid of.

Touring the inside of the school building, McEldowney pointed out a variety of features at the school’s gymnasium section.

There are two levels at the gym, with the basketball court area 14 feet into the ground. The upper level extends another 24 feet upward.

In all, the gym can seat approximately 2,000 people.

“What we lost in one basketball court, we were able to gain in our upper deck square footage that allows for more flexibility,” McEldowney said.

They were also able to increase the size of the weight room and wrestling room. The latter will also serve as a bit of a multipurpose space where other groups can meet and work in the space.

McEldowney’s favorite feature of the new gym space is the multipurpose opportunities it will provide, as well as the ability for spectators to walk all the way around the gym in the upper deck during a game and the upper deck’s angled seats at the corners.

“It’s going to be very user-friendly for our coaches and our students,” McEldowney said.

The space received input from the school’s coaches and PE instructors, just as other spaces at the school received feedback from their respective future users.

“With all of our spaces, we really tried to do our due diligence and involve the people who would use those spaces the most,” he said. “Their opinions were very important in our design process. It’s been a truly collaborative effort, and we feel very excited about how it’s turning out.”