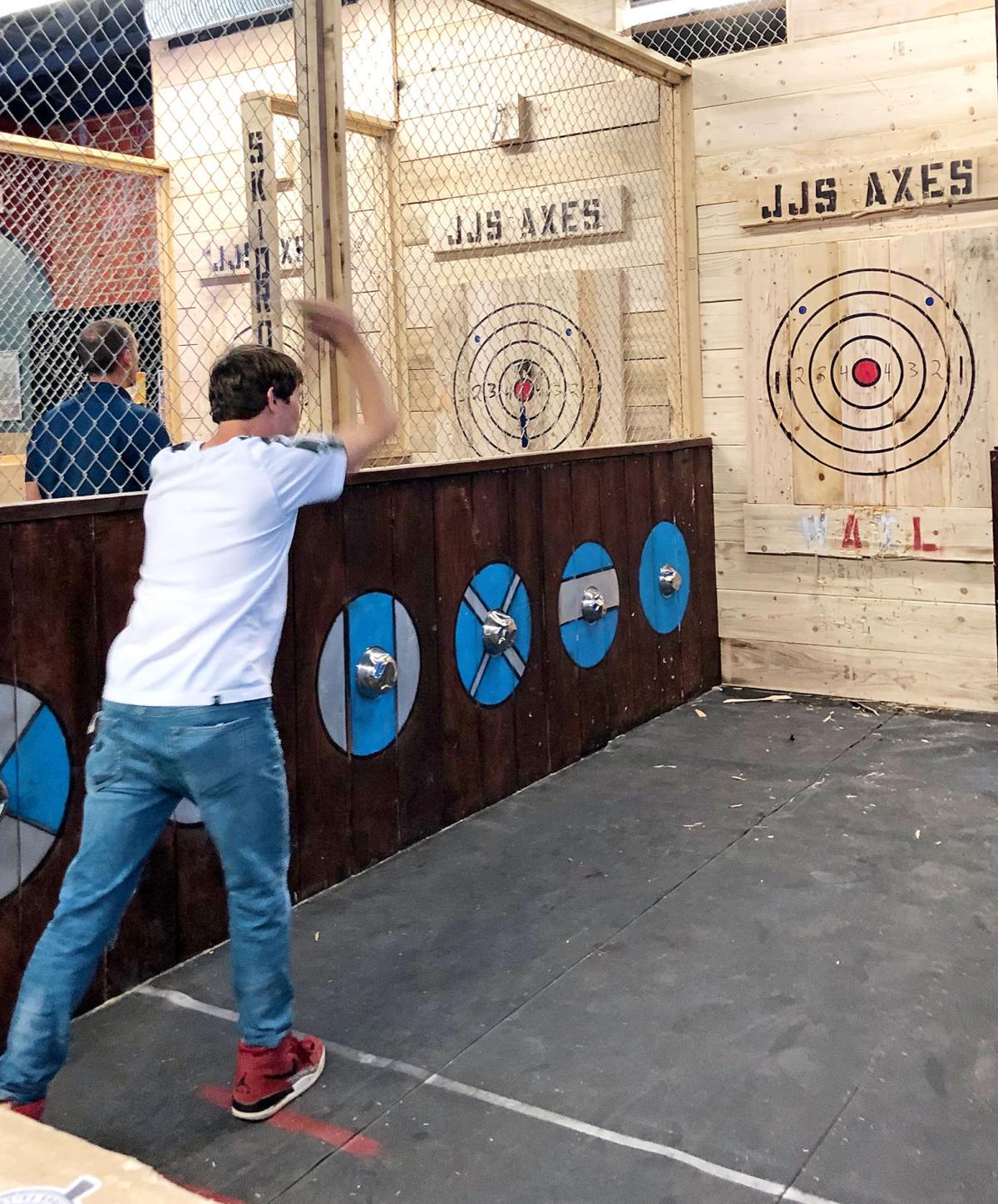 Cody Meendering has been participating in an official ax throwing league this year. With feet planted and arms raised above his head, he’s able to give the ax a solid throw at a wooden target at the end of the lane. 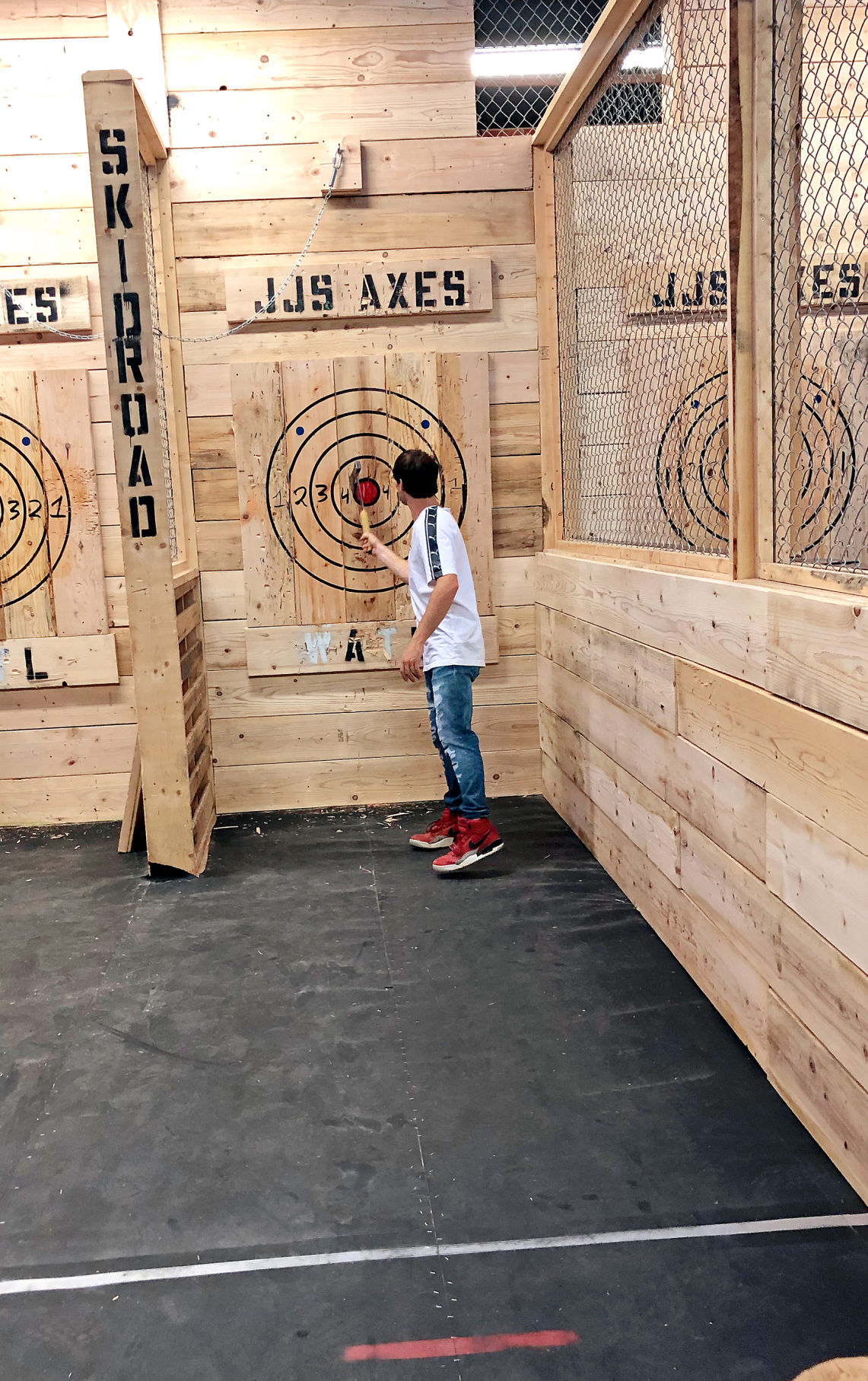 Cody Meendering removes an ax from the target during a competition at JJ’s Axes & Ales in Sioux Falls. Meendering has been participating in a league for the last year.

Meendering’s mentor Lori Brandt, explained it was cold and they had been cooped up for a while.

“We were looking for something to do. I said, I got an idea; let’s try this and see how it goes,” she said.

They wound up at JJ’s Axes & Ales in Sioux Falls, SD.

It was a completely new experience for Meendering of Sioux Center, who hadn’t heard that kind of competitive sport existed.

“We went and they weren’t busy that day, so this guy who worked there spent an hour with him,” Brandt said. “Cody just had a natural knack and he mentioned there was a league and what that all entailed.”

It suited Meendering well, as he likes to stay physically active. They found themselves going back every week for league and practiced on the weekends when they could.

Dalton Homeier is one of the “axperts” employed at JJ’s Axes & Ales.

According to Homeier, the league is called the World Ax Throwing League. It’s the official international organization that oversees the sport.

A two-hour time slot is blocked off at JJ’s Axes & Ales for league members to come in and compete.

Homeier estimated about 14-20 people are participating in their league.

Competitors are randomly paired up. They each take turns throwing, each making 10 throws for one round. Like bowling, they cannot go beyond a line marked out a set distance from the targets.

On the fifth and 10th throws, the thrower can decide if they want to “go for the kill.” That means declaring before you throw that you’ll try to hit one of two small blue spots marked out on the target. These are worth eight points if hit at this time.

“You add up your scores,” Homeier said. “Wins and losses don’t really matter in ax league. You’ll add up your running total after seven weeks, and then on the eighth week there will be a tournament based on your score. The winner of the tournament then has a chance to advance to regionals and nationals and keep moving on. But your total score has to be up there to be competitive with everyone else around the country.”

A perfect game is 60 points, and Meendering has nearly gotten that. In the summer league, he’s scored as high as 59 points.

So far, his league is off to a strong start, according to Brandt.

There are some regulations on the axes competitors can use, according to Homeier. The blade and the handle can’t be too long, and the whole ax can’t weigh more than 3 pounds.

Different styles of axes lend themselves to different throwing techniques. Some are better suited for one-handed throwing, while others need two hands to throw.

Meendering prefers to use both hands over his head to give a solid throw of the ax.

“You do have to practice your aim,” he said, “and you have to be able to throw it hard enough to get it to stick in the wood.”

The targets are regulated as well, and JJ’s works to meet those requirements to remain official with the World Ax Throwing League. They must be set a certain distance off the ground, and each the target circles a certain diameter, among other criteria.

They use spray bottles to soak the boards they use for targets so that the wood is softer, making it easier for the ax blade to stick.

“If they’re dry, then they can be hard. Then sometimes, even if you hit it, it can bounce off,” Meendering said.

Meendering said it’s the people there that really make it a fun pastime.

SIOUX CENTER—It might be hard to tell underneath the helmets, but there are five new faces at the Sioux Center Fire Department: Nate Mostard, …