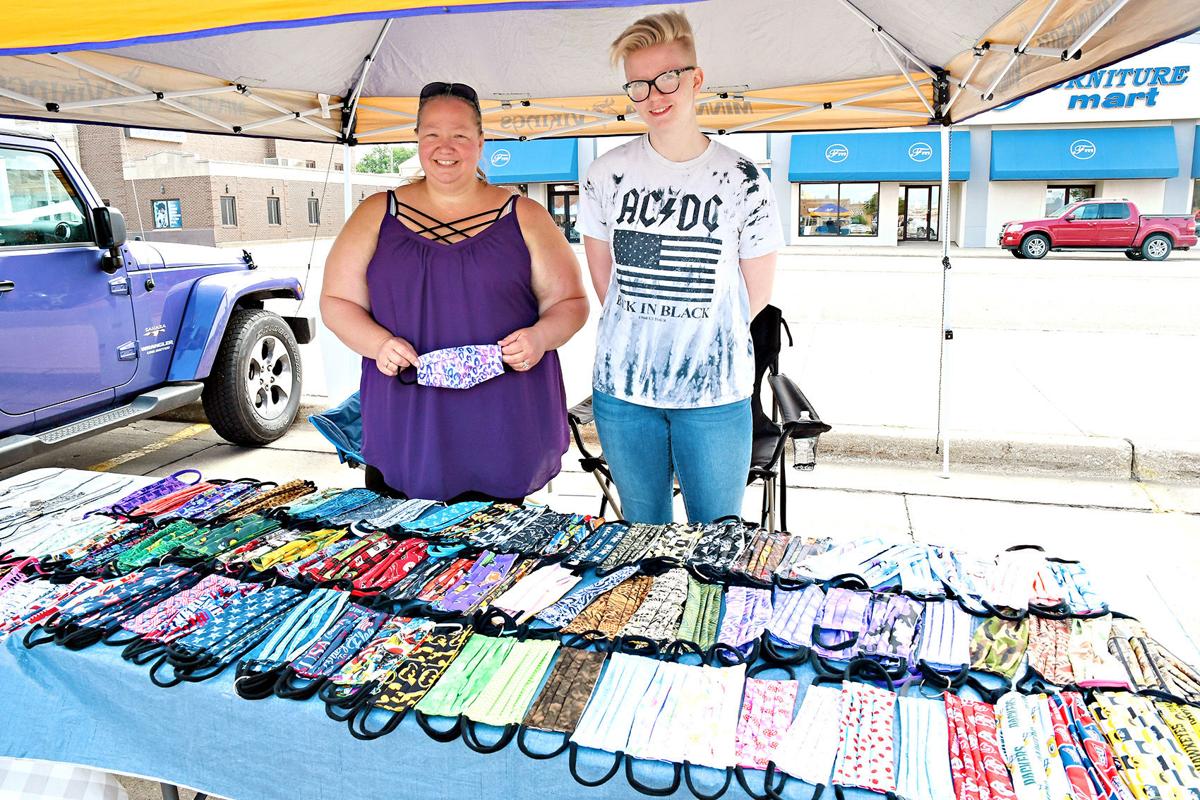 Wendy Heikes of Hull and her daughter, Amanda, come to the Sioux Center Farmers’ Market about 8 a.m.-noon each Wednesday in the Centre Mall parking lot to sell the plethora of masks she’s created throughout the past couple of months. 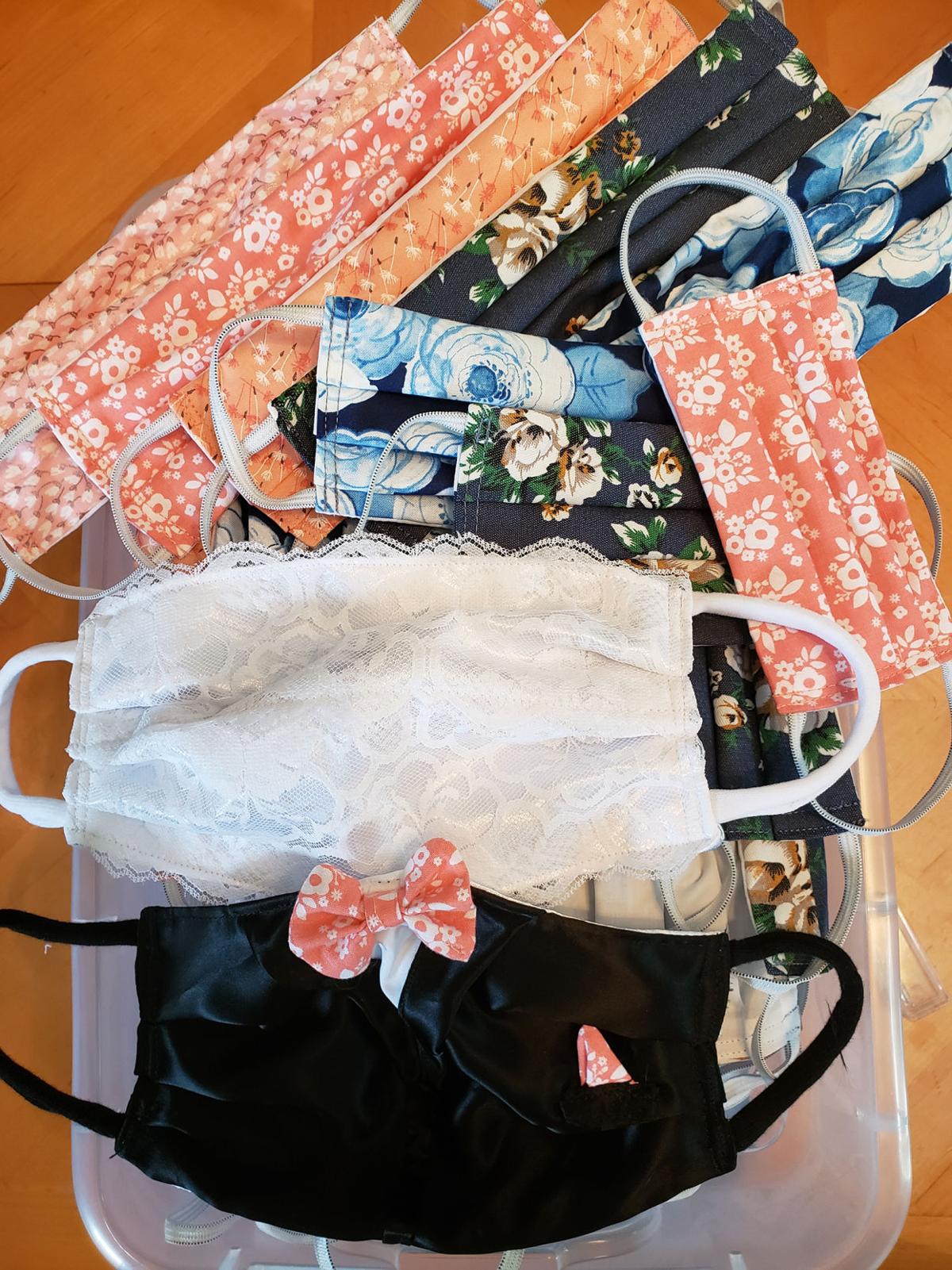 Wendy Heikes estimates she’s made more than 300 masks, 75 of which were using fabrics a bride selected to provide masks for their wedding guests.

Wendy Heikes of Hull and her daughter, Amanda, come to the Sioux Center Farmers’ Market about 8 a.m.-noon each Wednesday in the Centre Mall parking lot to sell the plethora of masks she’s created throughout the past couple of months.

Wendy Heikes estimates she’s made more than 300 masks, 75 of which were using fabrics a bride selected to provide masks for their wedding guests.

“My mother-in-law said she wanted a mask to wear,” Heikes said. “Though I know how to sew, initially I told my husband I wasn’t going to do it, but I broke down and bought some fabric and made a mask. Then others started asking because so many people didn’t know where to find them and wanted to have one on hand, so it snowballed into making hundreds of masks later.”

Last month, the Hull resident started bringing the surplus of that hobby to the Sioux Center Farmers’ Market about 8 a.m.-noon Wednesdays at the Centre Mall parking lot.

“Buying fabric is kind of fun, addicting,” she said. “I started out buying various half yards but probably have bought hundreds of dollars of fabric for this by now. I had quite a few and my husband encouraged me to sell them so I called up the mall and asked if I could come so here I am.”

The third generation sewer is also a full-time emergency room and med-SURG nurse at Floyd Valley Healthcare in LeMars. Through that position she’s worn a variety of homemade masks that were donated to that hospital.

“I quickly learned what I liked and didn’t like about different homemade masks,” she said. “The ones that use regular ponytail holders for the ear part — those really hurt after a while. When I decided to make masks, I found softer hair ties that are super stretchy and comfortable.”

Some designs are bulkier, especially for wearing for longer periods of time.

“I designed my masks to mimic the regular pleated PPE we have at the hospital,” she said, noting she uses cotton fabrics for both layers of the mask.

She’s sold about 300 of her homemade masks in the past two months, including an order of 75 made specifically for a couple’s wedding party and their guests.

“My mom had some blue satin fabric left from her bridesmaid dresses so I used that on the back of the bride’s lace mask to provide something old or something blue for the wedding,” Heikes said, noting she made a little tux-type mask for the groom and the bride provided fabric for the guests’ masks. “It’s not something anybody thought they’d need this year but I see this as another way I can help.”

Heikes has donated some of her masks to the LeMars hospital and started keeping a few extra masks in her purse.

“Sometimes I go to places like Walmart and I’ve seen some elderly, especially men, with a makeshift mask that’s not vary durable,” she said. “It feels good to give them something better, support them in this way.”

She’s also started filling requests for kid-sized masks, she said, as parents look to the start of the school year at the end of the summer.

Heikes also sells masks Thursday evenings at the Rock Valley Farmers’ Market. Those interested also Facebook message her or e-mail because, being labeled a health product, she’s not allowed to sell them via Facebook Marketplace.

“I enjoy coming to the markets,” she said. “It’s fun meeting different people, getting to see other communities. I never thought we’d be running out of PPE and this would be something I’d do this summer but it’s been fun to use a skill I have in this way.”