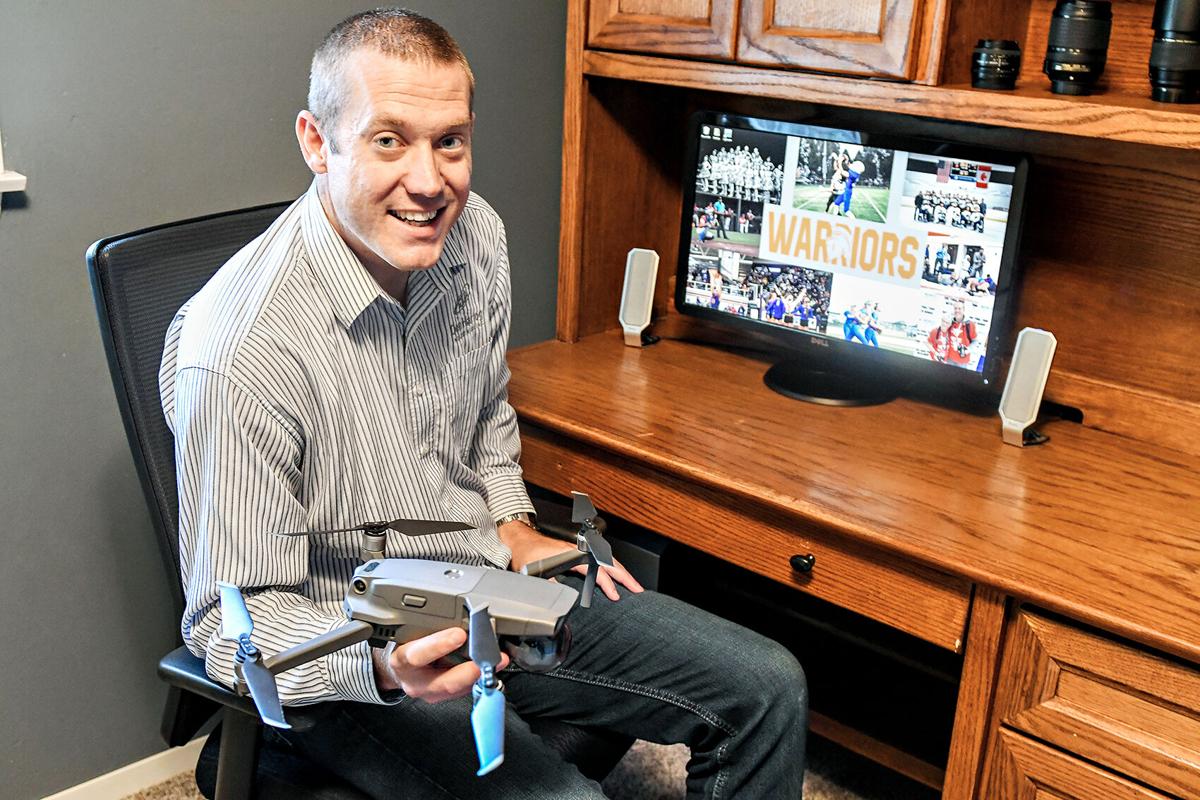 A self-taught photographer, Dan Wolfswinkel enjoys getting to use his equipment out in the field, whether it’s sports or nature. One of the latest additions to his camera equipment is a drone. 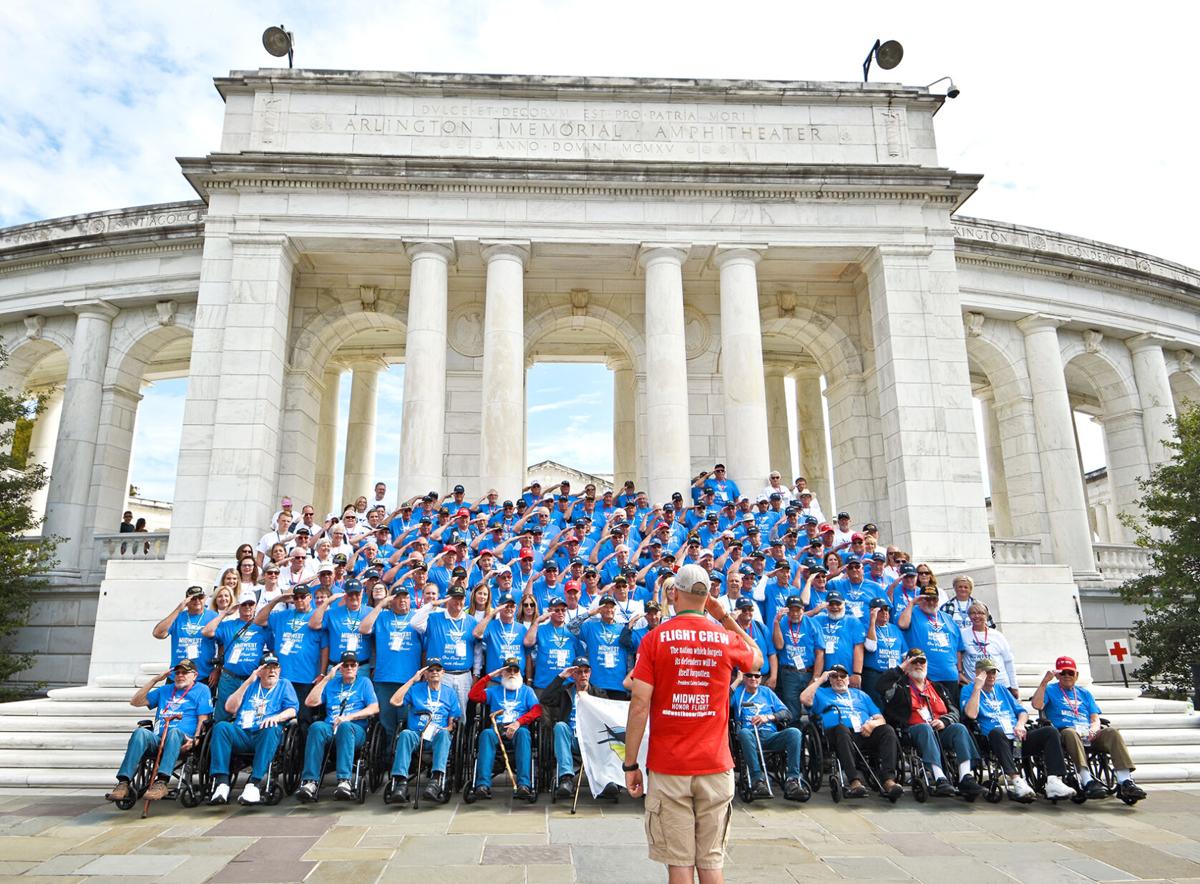 SIOUX CENTER—For the last year, Dan Wolfswinkel has been able to merge two of his hobbies — sports and photography — to serve Sioux Center students and families.

An IT specialist for Den Hartog Industries in Hospers, the 34-year-old Sioux Center resident has been interested in photography since his teenage years. Of course back then, his access to equipment was much more limited, but he enjoyed learning the craft with budget-friendly point-and-shoot consumer grade cameras.

He had no special training to speak of, but he read books on the subject and practiced.

Eventually he got an entry-level DSLR camera, a Nikon D3100.

“It was the cheapest DSLR you could get with a lens kit, with an 18-55 mm lens,” Wolfswinkel said.

As a father to three children — Jaedyn, 17, a junior at Sioux Center High School, Carter, 14, a freshman, and Sawyer, 11, a sixth-grader at Sioux Center Middle School — he began to use his kids’ sporting events as a chance to practice his photography.

There were plenty of frustrations as he tried to hone his skills, such as the difficulty that comes from the gym lighting.

“I just made it a mission to learn how to overcome those hurdles,” Wolfswinkel said. “I knew some of it was the camera, the equipment, but some of it was just knowledge.”

From there, he turned to online resources to bolster his practical experience with some of the technical aspects of photography that could help take his photos to the next level. One useful blog came up with different tasks to focus on while taking photos, functioning as drills for him.

“I’ve been doing this heavily for a year, and I’m taking notes all the time,” he said, adding, “If I look back at the beginning through now, I’ve learned a lot. It’s being behind your camera, knowing your gear and what works, what doesn’t. I study a lot when I come back to the editing.”

Through that method of carefully noting his settings and trying out different things while taking pictures, he’s been able to improve his skills as a photographer.

And others have noticed. He credited Gretchen Vande Poppe of Alton, mother-in-law to Sioux Center football coach Tim Van Regenmorter, as his starting point in taking photos for many of Sioux Center’s sporting events.

For years, she was the one at the sidelines taking pictures, but with a grandson in the MOC-Floyd Valley School District, she wouldn’t be able to make it to all of Sioux Center’s games anymore.

His wife’s cousin, Heidi Hooyer, then recommended his name, and he was soon asked if he wanted to try his hand at sports photography.

Wolfswinkel accepted, and in the fall of 2019, he started taking photos at Sioux Center High School football games.

The school doesn’t pay him to do this though he is provided passes so he doesn’t have to bother paying gate fees. And he makes the photos available online for free, although there is a way to donate if people feel inclined.

It’s important to him that the photos remain free for families. That way, everyone can have access to quality photos regardless of income and can simply enjoy the game instead of bringing their own cameras.

“My motto has been, I’m going to put it out there, and if families feel led, I’ll put my Venmo account out there,” Wolfswinkel said.

People have expressed their thanks by donating nearly $600 in the last year. The way he sees it, any donations made can go toward upgrading equipment.

“What I do is I have a Google Drive set up,” Wolfswinkel said. “Every time I shoot a sport, I upload all the originals to a Google Drive and that’s on my Facebook page and Instagram page. Any parent can go to the Google originals and download it for free.”

During his year or so of doing this, he’s found that hockey is the most challenging sport to photograph well because of the speed and chaos on the ice. Wrestling, however, is the easiest, as players are restricted to a confined area that makes it easier for him to get his camera properly adjusted.

“I am a challenge seeker. I love challenges,” Wolfswinkel said. “The sports element of it is something that pushes me all the time and part of the thrill. I don’t like getting bored with stuff where it’s easy.”

But he also enjoys the students and getting to know them through their events.

As a youth group leader at New Life Reformed Church in Sioux Center, he knows a lot of youth involved in sports and this is a way to connect with them.

Working close to the athletes has also allowed him to build relationships with them and celebrate their victories with them.

“My philosophy is it’s about capturing moments,” Wolfswinkel said. “It’s not just sports. It’s about relationship building. … It’s not specifically about sports for me, it’s about the Warrior student body and covering their interests.”

Even though he hasn’t been doing this for the school that long, his efforts have gotten the district’s attention and appreciation. At the Sept. 21 board of education meeting, he was presented with an Above and Beyond Award for a long day of photo coverage he put in this spring.

He earned it after going to take photos of Chayce Hooyer, a relative of his, as he wrestled in the state tournament in February. Wolfswinkel took the day off, went, and took the photos. That same day was a much-anticipated basketball game against West Sioux in Hawarden, so as soon as he finished at the state tournament, he hit the road.

“I just wanted to capture that day, a pinnacle in his career that this wrestler worked for. I really wanted to capture it and make sure he had coverage,” Wolfswinkel said. “I booked it straight from that wrestling meet to Hawarden and got there just in time for tip off.”

One of his newer tools is a drone he bought a year ago with a vacation in mind. Before the coronavirus came, he got the drone to take along to a trip with his wife, Mandi, to Iceland. With it, he hoped to use it for capturing images of that country’s glaciers and volcanoes.

Although the vacation is postponed, he was able to use the drone for other trips and projects, including a trip in Colorado and for photographing different landmarks in Sioux Center, such as the water tower.

He’s also utilized his skills to serve veterans on the Oct. 12, 2019, trip to Washington, D.C., as part of Midwest Honor Flight. He had been scheduled to take photos of more Midwest Honor Flight outings this year, but the pandemic has postponed those.