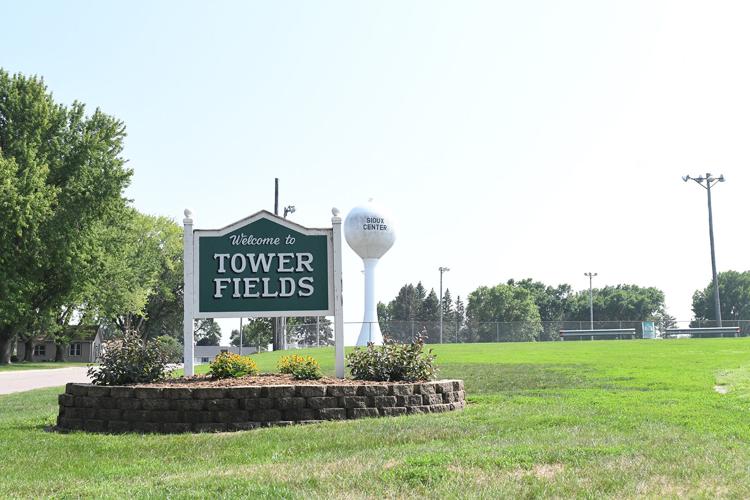 Heritage Village is preparing to move to its new location at Tower Fields. In addition to the buildings, there are plans to move the playground area and incorporate the city’s trails there. 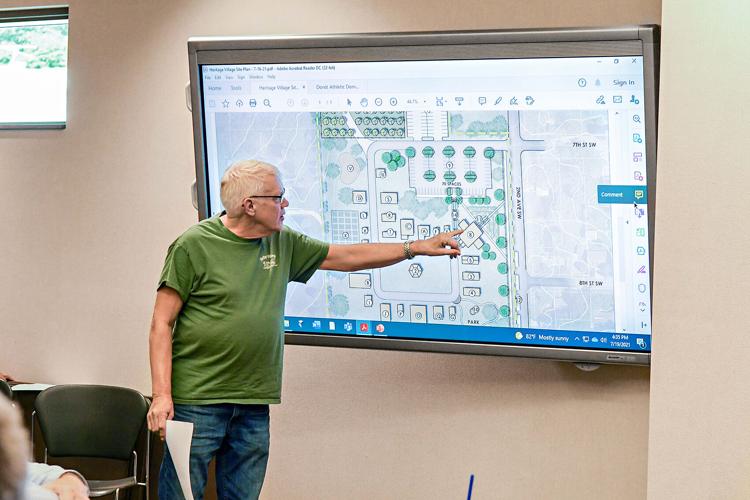 SIOUX CENTER—The Sioux Center City Council heard more during its July 19 meeting about a pair of projects that are closely linked: the planned move of Heritage Village and the latest plans for the construction of an indoor turf facility.

Plans are underway to begin laying out the future home of Heritage Village at Tower Fields, according to Sioux Center economic development director Dennis Dokter and Heritage Board chairman Larry Te Grotenhuis.

The decision to move Heritage Village came about in March to accommodate the construction of a new indoor turf facility, called the American State Bank Sports Complex, at the present Heritage Village site on Seventh Street Northeast.

Heritage Village and the city are partnering with Confluence on the development of site plans.

Because of how early the plans are for this site, discussions such as the costs and time frame for the work are still ongoing and are yet to be determined, Dokter said.

Te Grotenhuis said the Heritage Board’s vision for the Tower Fields site is to create a campus with an acreage-like farm and a space for more city-oriented buildings.

“We are working through that right now and we have some ideas we’re trying to get mapped and it’s up to him to fit them in there,” Te Grotenhuis said of Confluence architect Matt Carlile. “It’s still a very fluid document. We are going to continue to work on that and tweak it.”

In addition to planning the layout of the buildings, the plans seek to incorporate the Sioux Center trail system and move existing playground equipment at Tower Fields to a more visible and accessible spot near the water tower.

In the meantime, work has begun on preparing for the move.

“To give you a bit of an idea, about seven of us have over the last eight days spent about 107 hours moving and getting things ready to go,” Te Grotenhuis said. “A lot of items that nobody sees and excess equipment, we felt it’s best to start moving this stuff now and as we do this we are doing an inventory on it.”

City manager Scott Wynja presented renderings of the latest plans for the indoor turf facility, a project that partners the city with Dordt University in Sioux Center.

The facility features two main components: the dome portion that would feature the turf that could be used for a number of different sports and the entry building that the public would first enter before accessing the field.

Wynja said the main reason a dome structure was chosen instead of a more conventional building is one of cost.

“We’re looking at a facility that’s going to be $6.5 million-7.5 million when finished and operational, whereas if you’re talking about a permanent facility of that size, you’re probably in the $25 million-$30 million range,” Wynja said.

In this case, a “permanent facility” refers to a building made out of more conventional materials used, such as bricks and steel, as opposed to the dome, which is made so that it can be replaced.

“The typical bubble facility will have a 25 year warranty on that, but say in 20 years we replace that bubble, you’re talking $1.5 million to replace that,” Wynja said. “You can replace that a number of times over the course of the next 50, 60 years, you still see a cost benefit there versus a permanent facility. It far outweighs that.”

One of the changes made to the plans has been to add another 20 feet to the length of the dome portion of the facility, bringing it to 250 feet wide, 470 feet long.

The dome would be anchored with cables to footings placed around the edges of the facility. Dordt University vice president and chief administrative officer Howard Wilson said that the footings would probably be about 5 or 6 feet deep.

“There’s about 80,000 pounds of lift on each cable, so it needs to be heavier than you might think,” he said.

Beneath the dome, the field can be reconfigured to handle different sports. It could be set up to accommodate two softball fields or three youth soccer fields, for example.

When set up for that many soccer fields, having the extra 20 feet allows more room on the sidelines for spectators to gather and for temporary seating to be brought in.

The entry building design the city favors complements the aesthetics of the neighboring All Seasons Center. Measuring about 8,400 square feet, it’s a space that will feature vaulted ceilings with a lot of natural light under the current iteration of the design.

“We’re working through some of these details like the front entrance and vestibule area,” Wynja said.

Along the main corridor, an information desk would be placed, along with an area for concessions and seating where people can enjoy them. Wynja said a lot of facilities don’t allow food or drinks into the play area, and that’s likely going to be the case for this facility too.

This building would also feature offices, storage rooms and changing rooms. The optimal number of stalls for the bathrooms to include is still being worked through.

The back area of the entry building would have a predominantly glass wall so people can see where they want to go before entering the dome. It’s a narrow access point into the dome, however, which is one of the design features that goes with this kind of facility.

Another design feature called for enough room between the dome and the entry building so that snow falling from the dome could be gathered and easily be removed. To be on the safe side, the city increased the gap since the last presentation.

He added, “They say that’s the biggest thing, getting rid of that snow load. When it slides off, you don’t want that backing up onto the roof. It’s important when you get some heavy snowfalls that we get in there and pull some of that snow away from the facility. Get too much of a heavy snow load on there, that could cause it to collapse.”

On the end of the dome would be a large storage area that would also serve as a transition area from the outside to inside the dome for emergency vehicles during games. Entry would have to occur in stages so that the pressure keeping the dome aloft could be maintained.