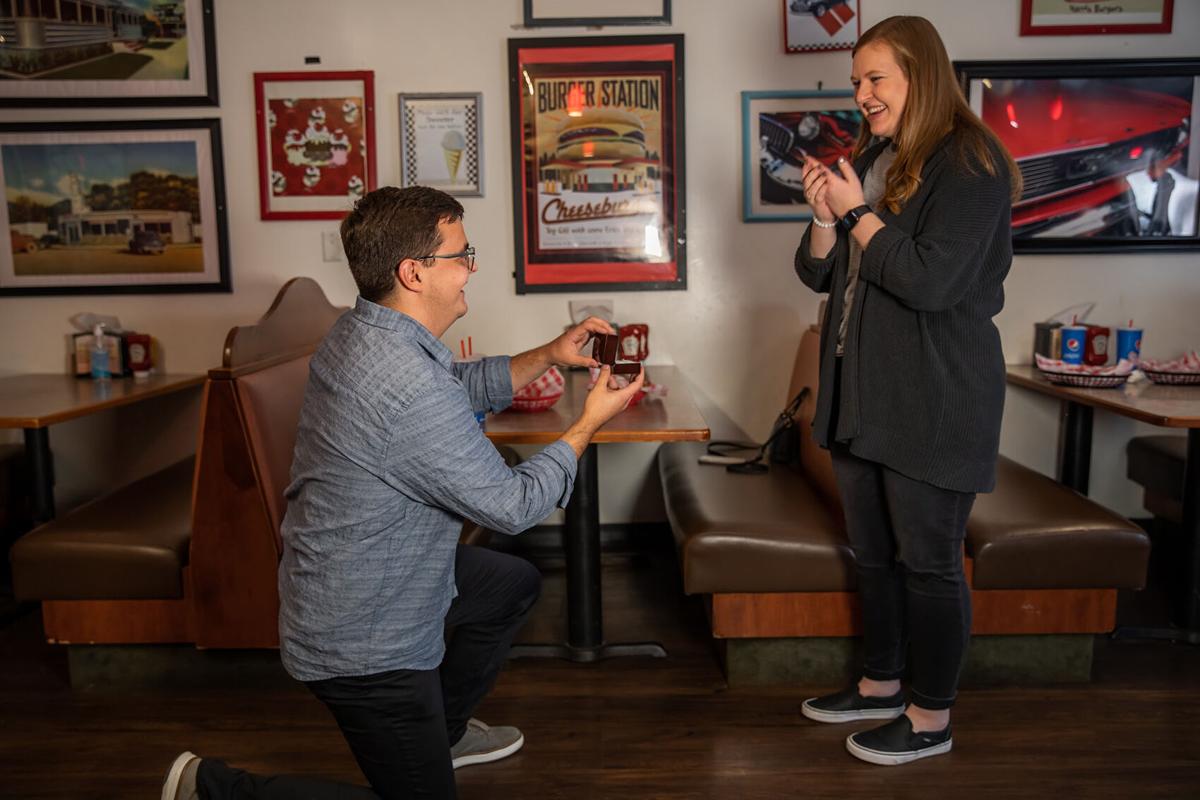 Dordt University junior digital media major Noah Diest of Sioux Falls, SD, proposed to his fiancée, Grace Aasheim, when shooting a music video for a song he wrote and recorded. 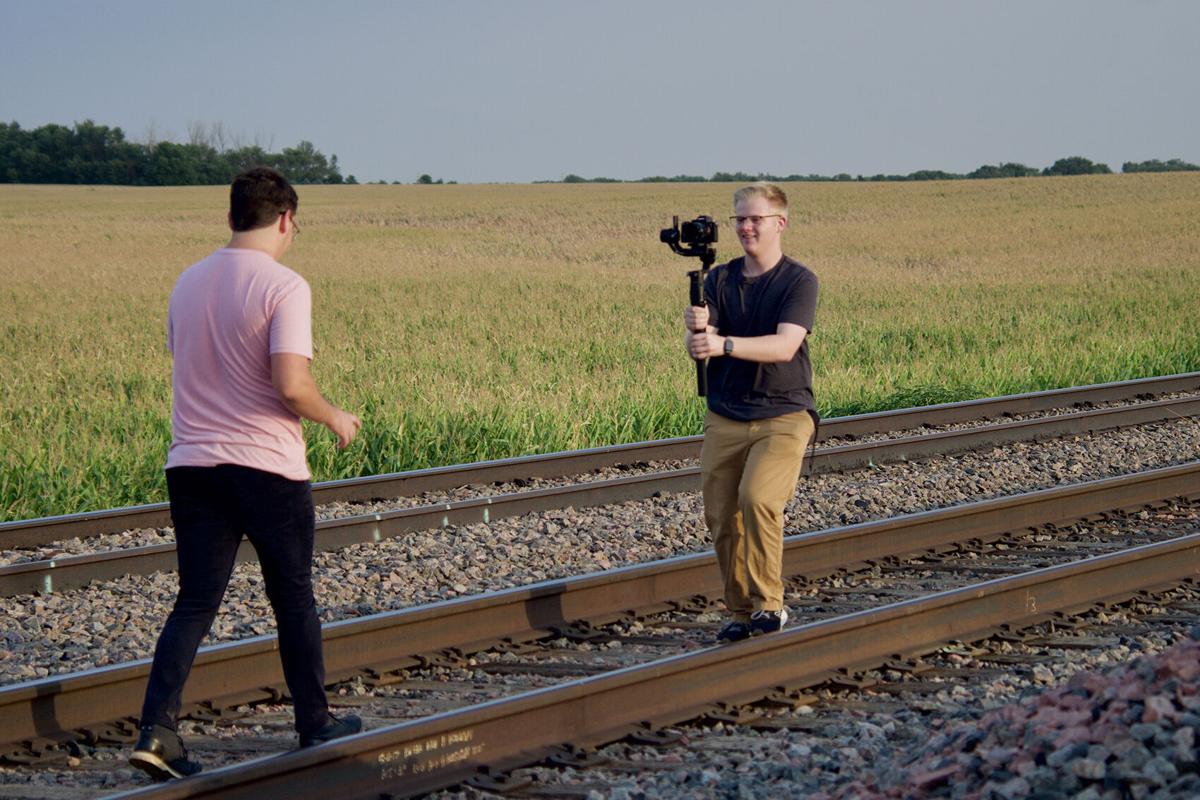 Dordt University junior digital media major Noah Diest of Sioux Falls, SD, proposed to his fiancée, Grace Aasheim, when shooting a music video for a song he wrote and recorded.

SIOUX CENTER — A Dordt University junior is following up on a dream that incorporates two loves of his life.

Twenty-year-old singer-songwriter Noah Deist recently released a second professionally made music video for one of his songs he wrote and recorded, which turned into the perfect opportunity to propose to longtime girlfriend Grace Aasheim.

Diest of Sioux Falls, SD, is a junior digital media major at Dordt in Sioux Center. He credits the coronavirus pandemic for altering his summer plans that built up “to the best moment possible” Sept. 12.

“It all just fell into place,” he said. “God has a way of making things turn out way better than we think.”

For starters, without the coronavirus pandemic, Diest may never have written the song “hey u” that turned into a music video release Sept. 27.

“With all that happened last spring and over the summer, I just sat down one night wanting to write an upbeat, happy love song in the midst of all that was going on,” he said. “It just kind of came out in one night. It’s different every time I write a song. Sometimes it takes months, but this one I wrote mostly in one night and tweaked it as I recorded it and produced it.”

He had the time to record and produce his own song because COVID-19 canceled his original summer plans.

“Producing the song myself versus recording in a studio allowed me to mix and master the whole thing myself, which gave me a little more freedom,” he said. “I not only got to edit the song but was able to arrange it in a way that’s compatible for a music video.”

He did all that while taking summer classes, “which meant I’d be graduating early, which meant my relationship timetable was also going to be moving,” he said. “All that impacted the song.”

In sharing the new song with friend Spencer Larson, owner of Dewy Films who created Diest’s first music video, Larson had an idea.

“He makes commercials, shoots weddings and enjoyed making the last music video,” Diest said. “He said he was interested in doing more visual storytelling and thought this song would be perfect for another video.”

Larson, in hearing Diest had bought a ring in early August and was thinking up proposal options, has a second idea — incorporate the proposal into the video.

“Right away I was excited but we talked through a lot of options before we came up with what we did,” Diest said.

To aid the storytelling aspect of the video Diest hired actors rather than having himself as the main focus.

“I didn’t want the song to be too attached to me,” he said. “A good song is something anyone can sing and feel a part of. I wanted to detach it from me for the most part.”

While attending Dordt this fall, shooting the video was broken up into four individual days throughout two weeks. Locations included Dordt’s bowling alley, the front porch of a Sioux Center home and Harris Burgers in Harrisburg, SD.

“We needed a restaurant-type setting and I knew the owner of this place well,” Diest said. “This place happens to mean a lot to my fiancée and I as we’d go there two, three, four times a week after school in high school to do homework, play board games or just hang out. I knew that would be the perfect location to propose.”

Knowing the owner, Diest asked if he’d be willing to close the restaurant an hour or two early one night for the making of his music video and propose to Grace Aasheim, 21, Sioux Falls, SD. He was granted his request for Saturday, Sept. 12.

“Keeping the proposal a secret was the biggest challenge I’ve had,” he said. “Something like this took a lot of planning, needed lots of people and the wider the circle became, the harder it was to maintain the secret,” Diest said.

Aasheim, who graduated in May from Augustana University in Sioux Falls, SD, and is attending the University of Nebraska-Lincoln for her law degree, came with her family to the restaurant that evening under the pretense that Diest needed extras in the video.

“We were just people eating and talking in the background,” he said. “The week before it all I talked to her parents and let her brothers in on the plan. Basically by the time it came to the video shoot, everyone in the room knew what was coming except Grace.

Her visible confusion at the end of the video shows how well the secret was kept. The couple has not yet set a wedding date.

“With the last line of the song being ‘I think I want to marry you,’ the proposal idea worked well,” Diest said. “Having met in band in high school, being band nerds together and having five years together, it’s an honor to have her say yes to this next stage of our relationship.”

SIOUX CENTER—Noah Deist is laying it out with his new song.