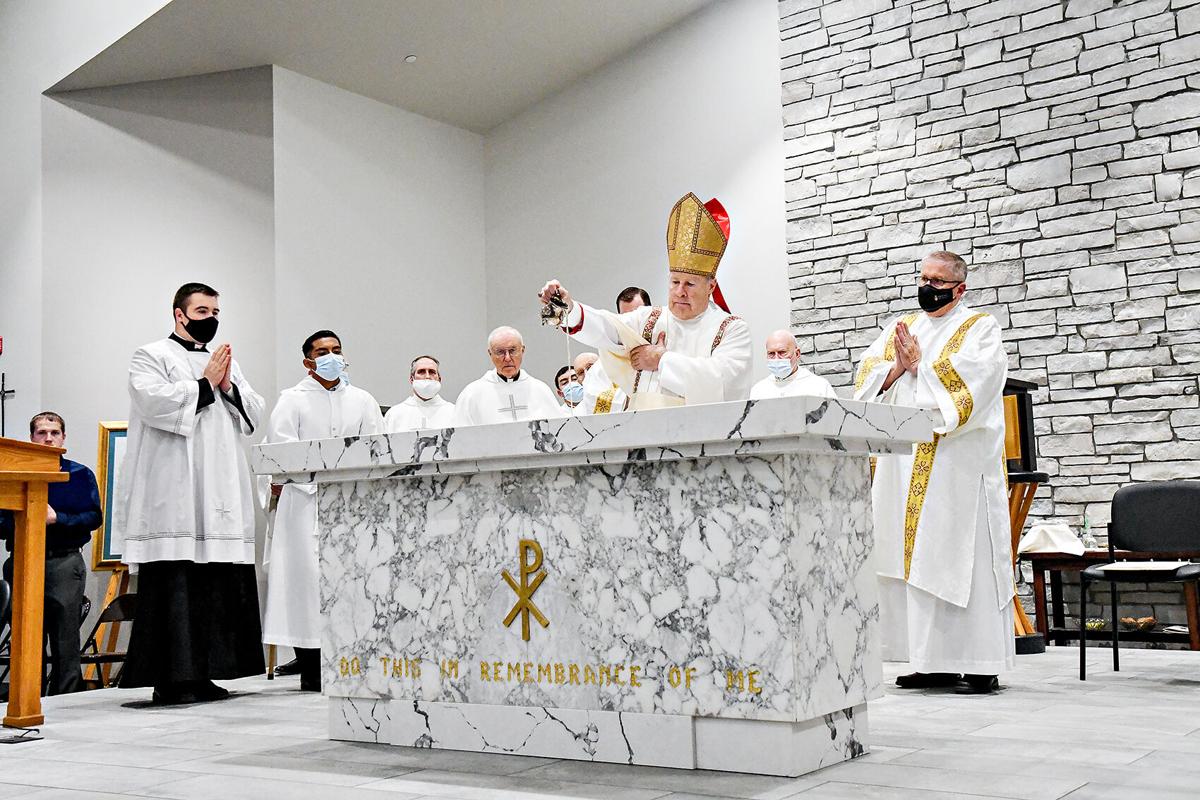 Bishop R. Walker Nickless of the Diocese of Sioux City anoints the altar at Christ the King Catholic Church with chrism at its dedication mass Nov. 20. 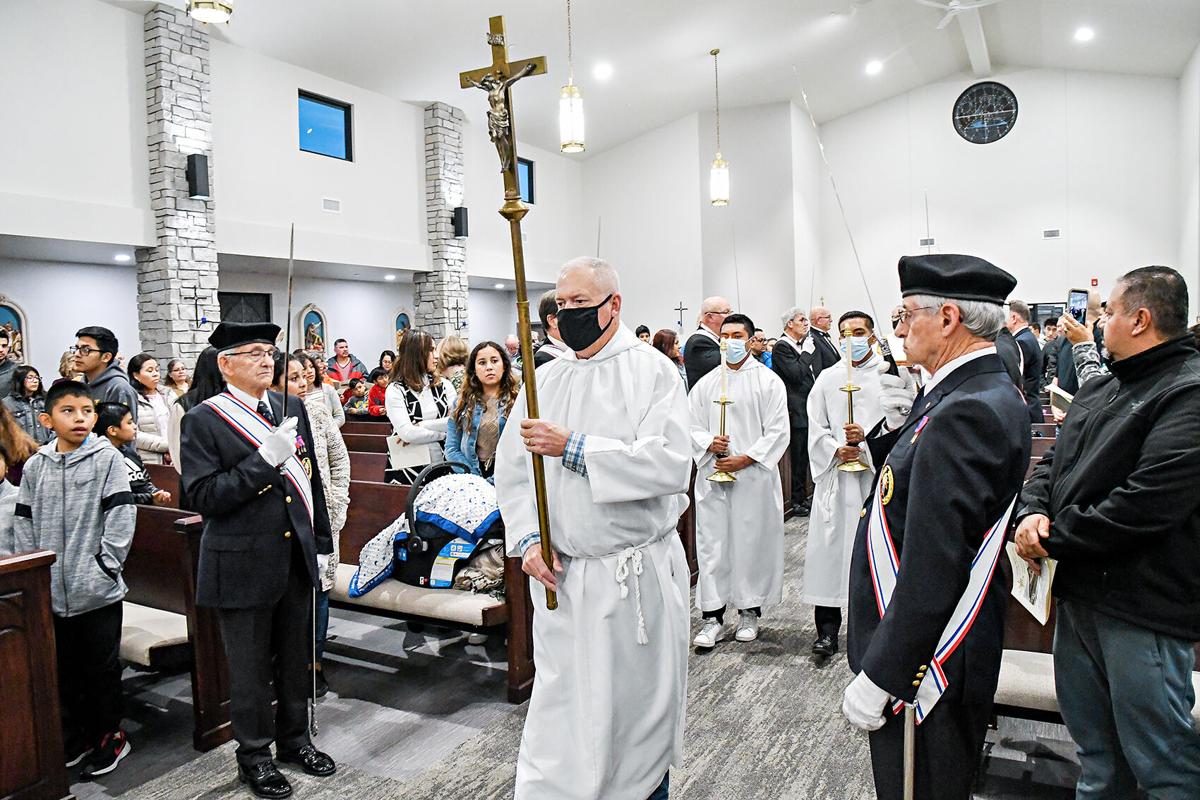 Members of the Knights of Columbus line the aisle at Christ the King Catholic Church Nov. 20 at the start of its dedication mass. 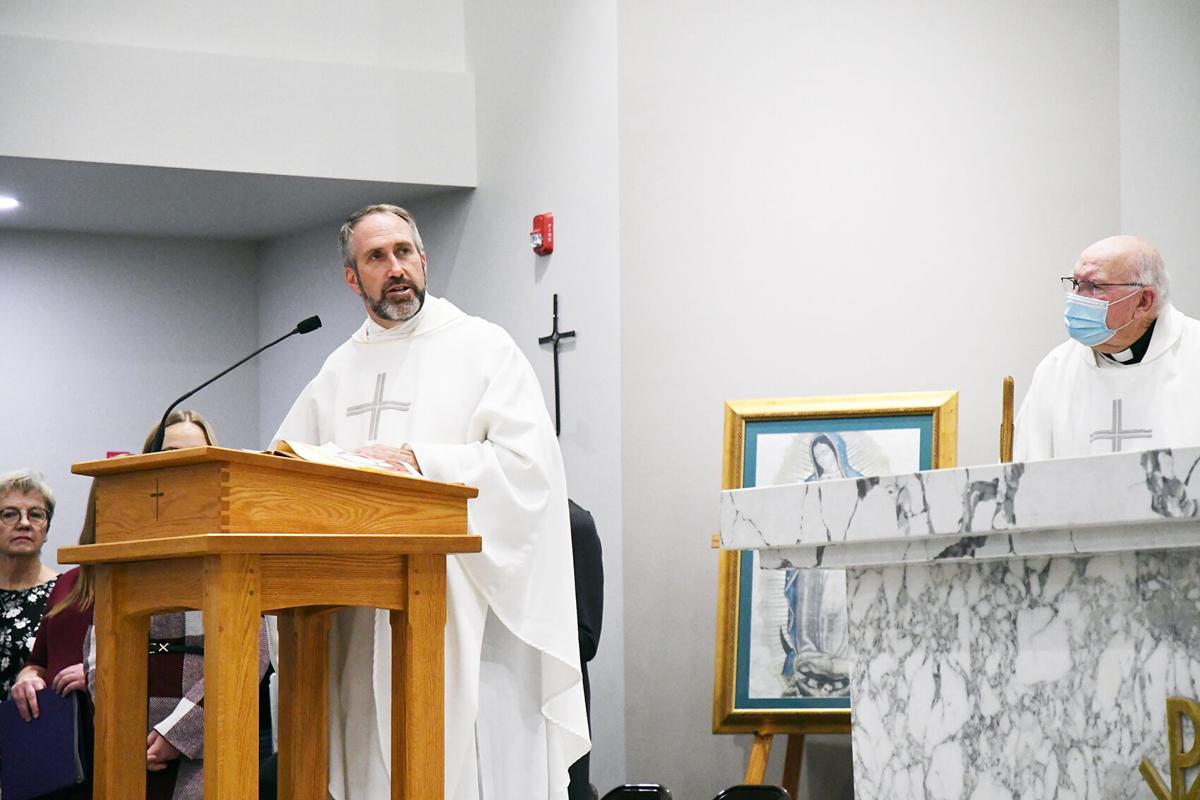 Bishop R. Walker Nickless of the Diocese of Sioux City anoints the altar at Christ the King Catholic Church with chrism at its dedication mass Nov. 20.

Members of the Knights of Columbus line the aisle at Christ the King Catholic Church Nov. 20 at the start of its dedication mass.

Although some final furnishings have yet to arrive at the new space, the church was ready for the ceremony thanks to the recent arrival of the altar. The dedication was presided over by Bishop R. Walker Nickless of the Diocese of Sioux City.

Christ the King Catholic Church at 501 Second Ave. SW, Sioux Center, broke ground on the project Aug. 20, 2020, with Vision Builders on as the general contractor.

“We don’t plan on doing this again in 20 years,” the Rev. Doug Klein said jokingly ahead of the dedication.

Following a mixture of English and Spanish worship, Nickless anointed the altar with chrism. From there, Klein and the Rev. Mauro Sanchez, the parochial vicar, anointed 12 spots around the church, reflecting the foundational work of the apostles. Those spots are marked with crosses and candles, which were lit after the anointing. After incense was burned, the altar was cleaned of the oil and dressed with candles and flowers.

As part of the night’s ceremonies, the relics of four saints martyred during a time of persecution of Catholics in Mexico were added to a special compartment at the base of the altar: St. Jose Maria Robles Hurtado, St. Atilano Cruz Alvarado, St. Jenaro Sanchez Delgadillo and St. Pedro Esqueda Ramirez.

Klein said that it’s exciting and unbelievable to finally have reached this point, as there’s been a lot of waiting for pieces to be restored and sent, such as the altar. He liked that the church’s architecture has a clean, modern look to it while retaining echoes of traditional church design. It can seat about 400 people.

Many parts of the new church came from St. Mary’s Catholic Church in Mallard, which has closed. The altar, the crucifix hanging above the altar, the wooden depictions of the stations of the cross, the tabernacle, and the ambo are all from there.

“About the time we were working on our campaign was when they were having their closing mass,” Klein said. “We thought a lot of the stuff there we could use here, maybe update or add our own touch to it.”

Similarly, items have been moved from the previous church space to the new. The church’s stained glass windows were moved to a space called the Martyrs Chapel on the west end of the new church, along with furniture made by a former worshipper.

The Martyrs Chapel is built to be a smaller, more intimate space for worshippers to use as a place to quietly reflect and pray.

The former church building will remain. Although they are now separate spaces, they will eventually be joined together into a single facility.

Throughout the construction project, Christ the King has continued to highlight Ephesians 2:19-22, which reads in part, “In Him the whole structure is joined together and grows into a holy temple in the Lord; in Him you also are built together spiritually into a dwelling place for God.”

SIOUX CENTER—Solar power is well on its way for one Sioux Center commercial space.