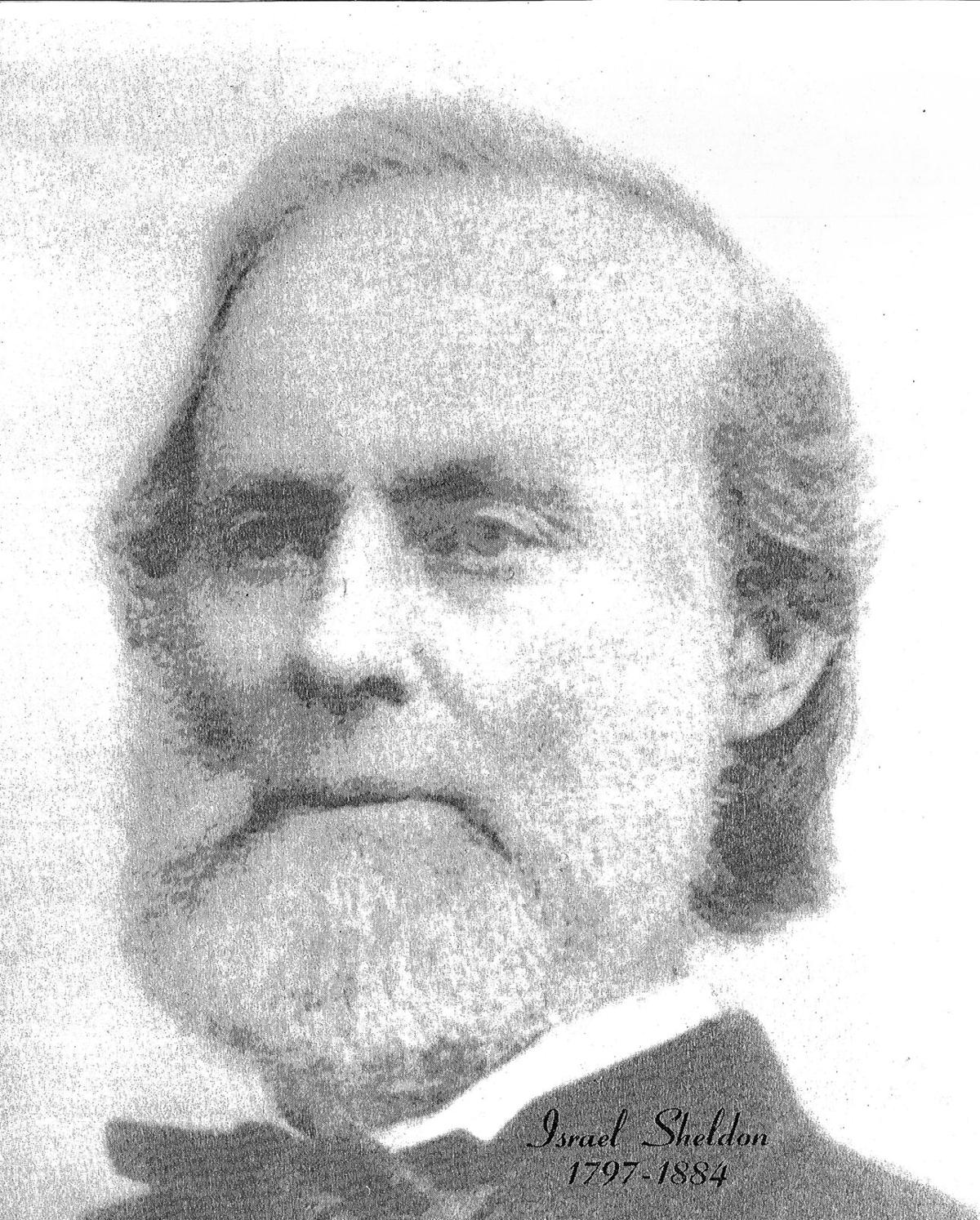 Isaac, Godfrey, John and William Sheldon came to America in 1658 due to the unrest caused by the Puritan Revolution and the Civil War in England. They braved a dangerous Atlantic Ocean voyage to join their Puritan friends and relatives in America.

By 1855, the Sheldon family had increased to 12,000 people in America. The family prospered and published a magazine about their Sheldon family.

Israel Sheldon was honored that his last name became the name of the town, Sheldon, in Iowa.

There are no records that have been found that tells which of the original four brothers that Israel Sheldon originally descended from, but records are found that start with Chris Sheldon, who married Rosanna Arnold. Their son was Remington Sheldon who married Huldah Greene. They had 10 children (one source said it was 13 children) and they were Israel’s parents. Israel was born in Pawtucket, RI, in 1797.

Remington and Huldah Sheldon sent Israel to an Academy in Woodstock, CT. When Israel was 14, he was hired by a Wilmington, NC, firm of shippers and exporters. Soon Israel became part owner of a sloop, a large sailboat, which sailed to Windward Islands and sold the cargo at a good price. After two years at sea, his ship had been captured three times and suffered losses.

Israel, his crew and his ship, were set free each time, but the fourth time, he and his crew were captured and taken to Venezuela. They were held prisoner for four months. U.S. Commodore Oliver Hazard Perry was sent to investigate and resolved the situation. A satisfactory settlement for the cargo was given, the ship was returned and apologies were offered and accepted for the capture of Israel and his crew.

During 1814-16, it was known that a competent captain with a sailing vessel could purchase cargo at one port and sell it at another port for many times what he had to pay for the original cargo. At that time cargoes consisted of household goods, machinery, guns or cotton. They exchanged their cargo for rum, molasses, sugar or blue indigo dye and could sell it when they got back to their original port.

When Israel was released from prison, he returned to North Carolina and rejoined the firm of shippers and exporters that he had earlier been associated with. He prospered 1816-43, which was 27 years. During this time, many new states were admitted to the Union and cotton and tobacco were in demand.

Israel Sheldon had five wives. They were:

2. Florence “Fanny,” with whom he had no children.

4. Harriet Cooke, with whom he had one daughter, Georgiana, who married John S. Tilney and they had one son, Israel Sheldon Tilney.

5. Lucy Eldredge, with whom he had no children.

Every one of his five wives died of a contagious disease and they were related as cousins to each other. I first thought that Israel Sheldon was somewhat of a scoundrel, but the contagious disease was consumption (tuberculosis), an endemic in those days.

Israel moved to Alabama and became a plantation owner and raised tobacco and cotton. After 14 years, he sold out. He and his family moved to New York City for a short while and then to East Orange, NJ. At this time, he invested in several railroads.

At age 60, he had four different careers: sailor; import-export specialist; cotton and tobacco planter; and finally an investment banker. The expansion of railroads made it possible to move farm products two ways, farm products to market and market to farms.

Railroad companies were compensated for laying of rails across unpopulated areas with liberal grants of land, approximately 10 miles on each side of the tracks, to be sold to interested buyers and the money was used to pay for laying rails. Railroad organizers managed to transfer large tracks of land to their own personal accounts, and that was what Israel did.

After the Civil War, E.F. Drake developed a plan to connect St. Paul, MN, with Sioux City. He met with Israel, who put together a group of people who financed the railroad to Sioux City. But this never happened. The railroad was built only to LeMars, and they rented the rest of the way to Sioux City from the Illinois Central Railroad.

Due to Israel being the major stockholder and board member of the Sioux City and St. Paul Railroad, it was decided to use his last name for the town where the last rail was laid before the Fourth of July. Sheldon was named after Israel Sheldon, a man who never set foot in the town of Sheldon.

Israel was a Republican, a supporter of Abraham Lincoln and a religious man. He was one of the founders of the Grace Episcopal Church in East Orange, NJ. He was an influential businessman, who used his own skill and hard work to become a financial prodigy of that era. Sheldon fathered four daughters and no sons. Israel Sheldon died in 1884 at the age of 87.

The total value of his estate was $2,997,471.54. With inflation, $100 in 1787 would be equivalent to $2,070.98 in 2021. When he died, they found $795 in his billfold. In 1884, that would be equivalent to most people’s life savings in that era. Personal bank checks were not used at that time. Evidently people had to carry enough cash to purchase anything they needed. It took three years to settle the estate. Israel’s heirs did not have to pay any inheritance taxes because the government did not tax inheritances then.

Another unique fact about Israel Sheldon is that while he never had a son, grandson or great-grandson with a last name of Sheldon, many of his descendants had either Israel and/or Sheldon in their first or middle names.

If you would be interested in seeing the final accounting of Israel’s estate, it is on file at the museum, thanks to Richard Bauer. It is too lengthy to copy here. I do not know of any living relative of Israel Sheldon living in Sheldon, but if you know of someone, please contact me.

Take 5: Words I want Elijah to use in stories