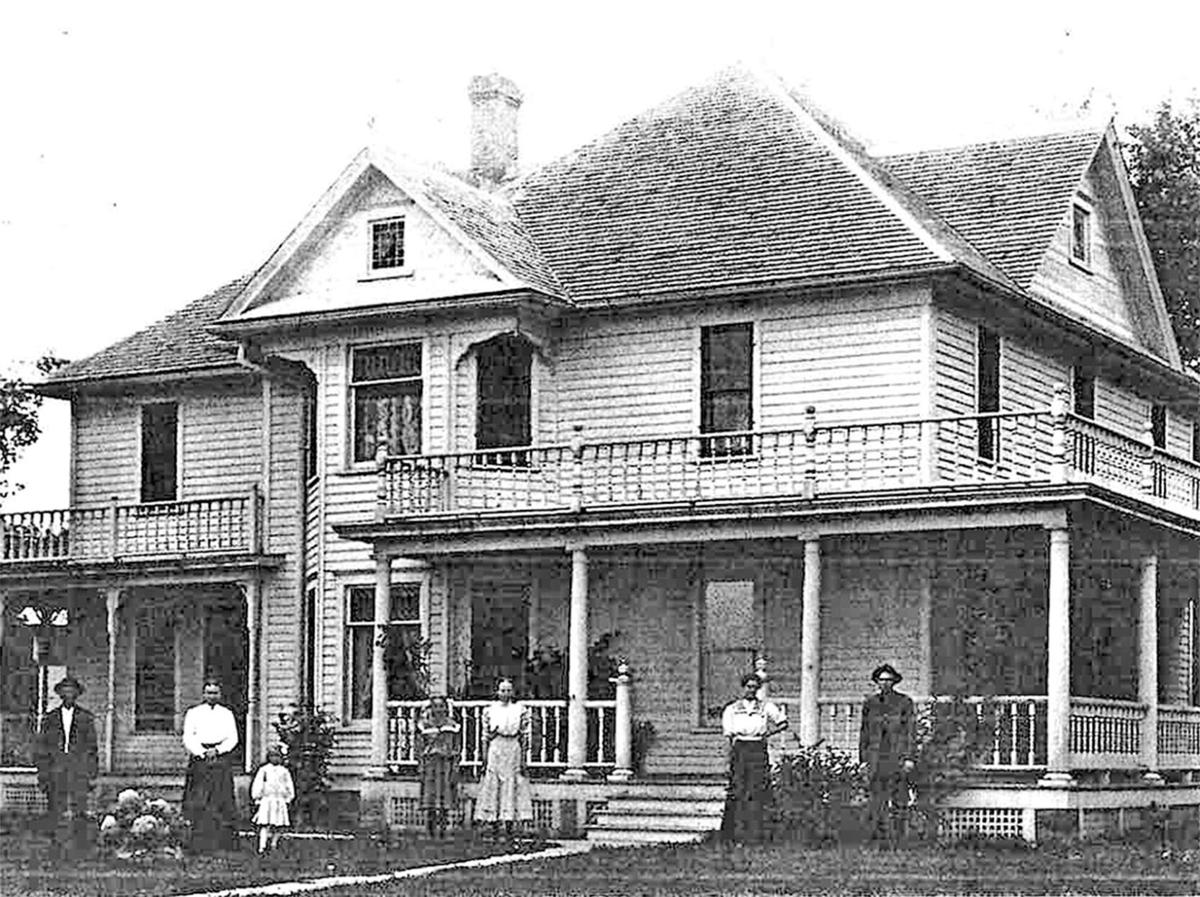 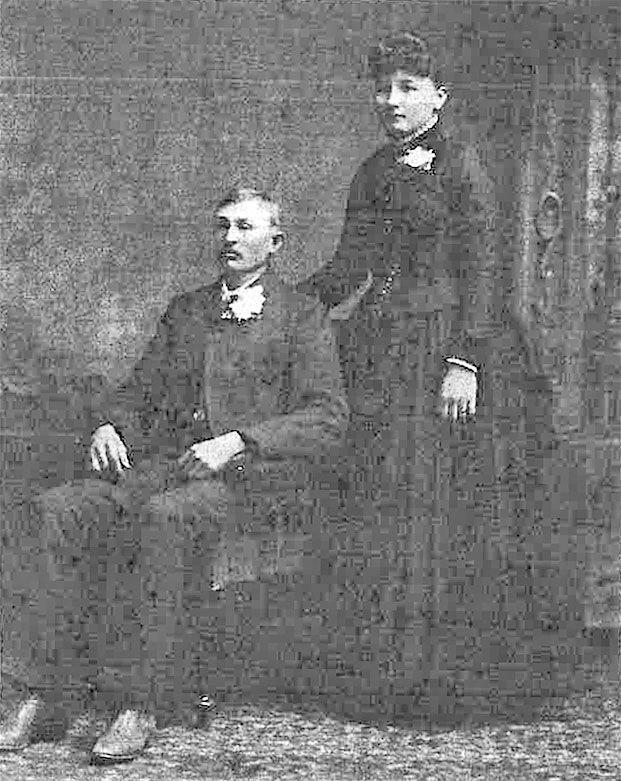 Wilmelmine Karoline Luise was born in the tiny village of Sabbenhausen, Germany, on Oct. 20, 1867, but she was known as Louisa. When she was 1, Louisa and her family immigrated to Illinois. While in her teens, she moved with her family and younger siblings to Plymouth County in Iowa.

Louisa met Henry Wolf in the Evangelical Lutheran Church in LeMars. Henry’s family also had immigrated from German to Ohio and then to Iowa.

Henry and Louisa were married in 1889 and rented a farm. By 1993, they had saved enough to purchase a quarter section of land north of Archer. They had a daughter, Elvia, and a son, Joseph, and moved into a ramshackle house on the farm they bought. Henry and Louisa purchased an additional 80 acres by 1900. By 1907, three more daughters, Clara, Zelma and Verna, were born in this crowded house. Another 80 acres of land in Carroll Township, two miles north of Archer, was purchased in 1915. They now owned a half section of land. They began raising livestock on their farm and purchased a steam-powered threshing machine and put their son, Joe, in charge of it.

They prospered and their lifestyle reflected their success. They purchased an automobile and built a grand home with wraparound porches on two levels with carbide gas lighting and indoor plumbing. With their increasing need for water, Louisa, by using her water witch, was instrumental in locating several other places where water was found on their farm. A second well was needed for their expanded livestock operation, a third well to meet the needs of the steam engine which powered their threshing business and a deeper well for the new house that had indoor plumbing.

In the mid-1930s, the Great Depression caused havoc with the farm economy. Louisa’s eldest daughter, husband and six children were left homeless when their farm went through foreclosure. Henry and Louisa came to their rescue and helped them finance a small piece of land and construct a modest bungalow and small barn, but there was no well on the place. Louisa, using her water witch, located the exact place to dig a well. They constructed the farm buildings near the well. All water had to be pumped by hand because the Rural Electrification Act did not bring electricity to this area for several more years. The well sustained Elvia’s family with water through those Depression years and beyond.

In 1944, Henry and Louisa retired from farming and purchased an acreage on the south end of Sheldon where Third Avenue ended and farmland began. On this acreage there was a five-bedroom house, a pasture for sheep, a small barn and a garage for Henry’s 1939 Buick sedan. One of the upstairs bedrooms became Louisa’s sewing room, office and command center. For about a decade, Henry and Louisa welcomed four generations of the Wolf family at their house, especially at Christmastime.

Henry fractured his hip in July of 1954 and developed pneumonia which took his life when he was 91. Louisa was unable to live alone, so she moved into a nursing home and lived three more years. Their home was sold, property divided into smaller lots, outbuildings removed, and the house was remodeled.

In the summer of 2015, Brad Pietens, Louisa’s great-grandson from Illinois, visited Sheldon and drove past his great-grandparents’ house to see if it was still standing. A woman was on the sidewalk and looked like she was leaving and Brad pulled over to ask her some questions. She told him to come back that evening when the owners would be there if he wanted to know more of the home’s history.

When Brad returned that evening, a young dad was taking care of two children while his wife was working. The owner graciously invited Brad to tour the house.

After touring the house for about a half-hour, Brad walked to his car and started to get in. The owner called from the porch, “Just a minute, can I show you something I found in one of the upstairs closets?” When the owner returned, he showed Brad an object and said, “I was going to throw it away, but it had this ribbon tied around it and I thought it might be something special, maybe a child’s crutch or something.”

Brad recognized it immediately. Somewhere at home, he had a picture of the object in his great-grandmother’s hands. It was Louisa’s “witching stick” and was probably 120 years old, hidden for more than six decades and never been found by multiple owners throughout the years. Evidently, she had placed it in the upstairs closet of her sewing room. It was now in the hands of Louisa’s oldest great grandson, by a chance encounter. Was there a bit of magic in Louisa’s stick?

No one knows how she discovered her ability to find water. Where did she get her witching stick? Some family members recall that she said it was from a willow tree growing on the banks of a creek.

She believed in her gift and used it repeatedly to enhance their farming operation and to help many friends and neighbors to locate water on their farms without accepting any compensation for locating the water.

This story is especially interesting to me, since my mother was the recipient of this gift of witching for water. So I called her a “witch,” and I told her that she purposely made it move, so it did not did not really locate water. I sincerely believed that a willow stick could not be used to find water and she was “pulling my leg.”

Actually, it was a wonderful gift and nothing to be ashamed about. Few people have the capacity to do this.

The time came when I had to admit that water can be found by this method. I was taking a class from the University of Iowa where we did many different and unusual studies. We went to landfills and dug out garbage that had been placed there and analyzed it according to the amount of decay and the amount of time it had been in the ground.

One of the next things that we did was to be given a willow stick to see if any of us could find water. I didn’t want to do it, but the professor required we all try it. Guess what happened! You guessed right! I was the only one in the class that could use a witching stick and find water. No matter how hard I tried to keep the stick from moving, I was unable to prevent it from moving. The professor gave me a coat hanger to see if I could witch for water with the coat hanger and I could.

The worst part of this story came when I knew I had to apologize to my mother. I was ashamed that I did not believe my mother. I have not tried water witching since I took this graduate course and have not told my family about water witching, but water can be found by witching. Witching is a gift, and now I sincerely believe witching is real.

Believe it or not, but I heard the story of a guy who used a pliers to witch water! And it is true!