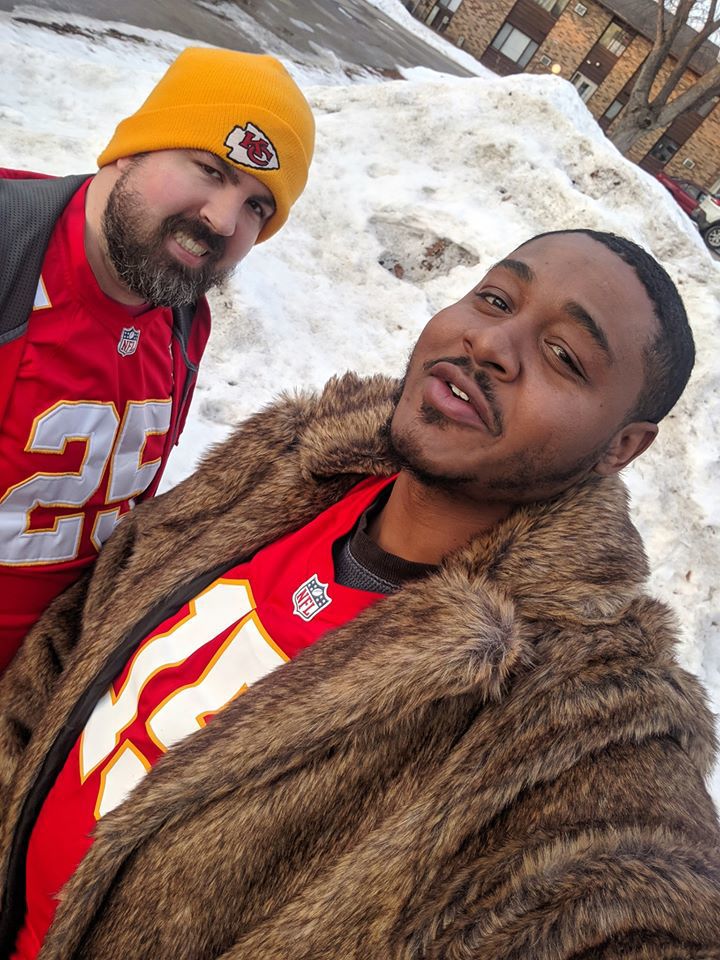 Mark Mahoney and Ty Rushing are superstitious Kansas City Chiefs fans, so they took a selfie before the Super Bowl in the same spot they took one before their team played in the AFC Championship Game. 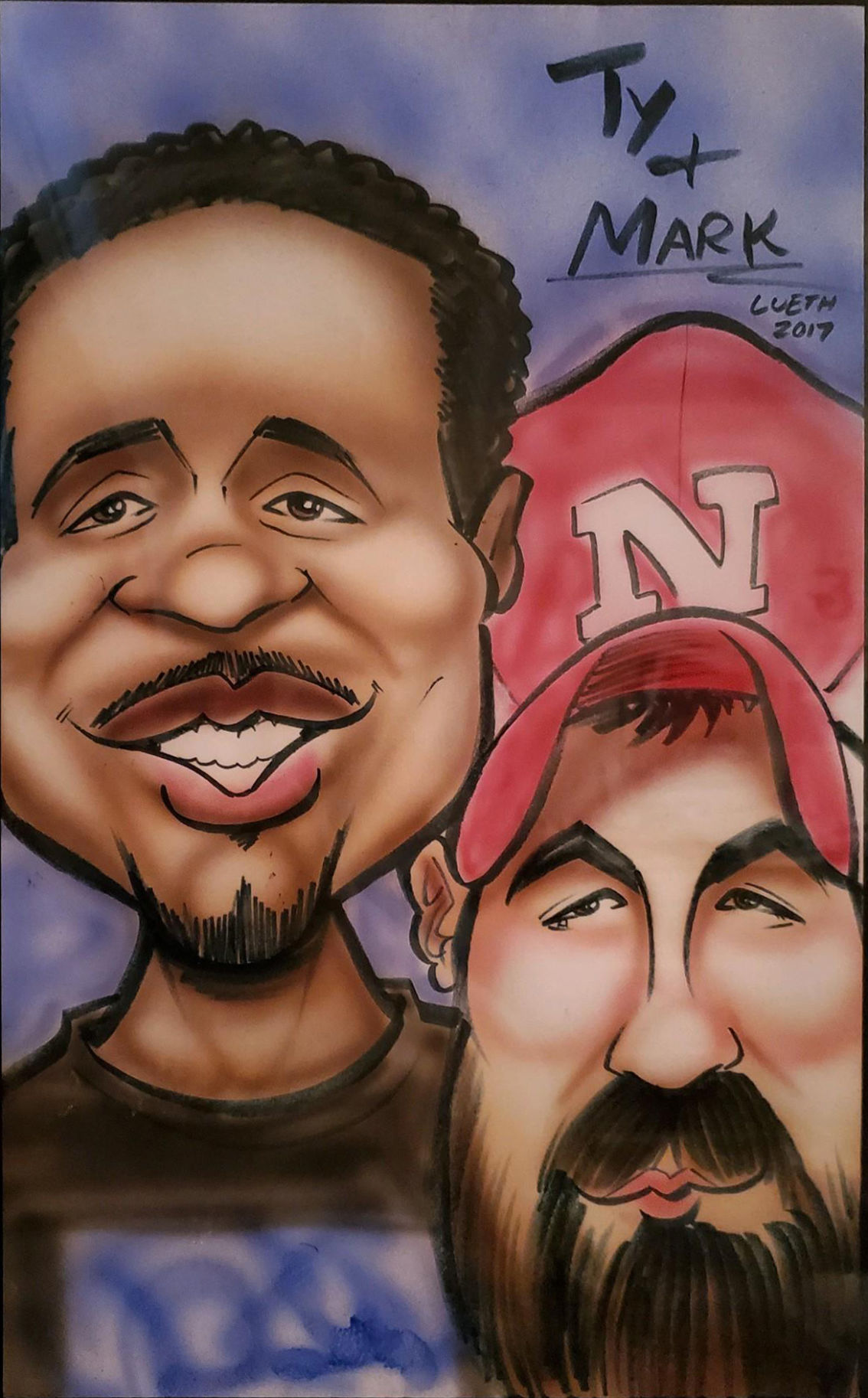 Christina Mahoney made Ty Rushing and her husband, Mark, pose for this drawing during a comic book convention in Sioux Falls, SD.

Ladies and gentlemen, Mark Mahoney has left the building.

Friday, June 26, was the last day of work at Iowa Information for Mark, who soon will be moving to Bloomfield, NE, where he and his wife, Christina, have purchased a home to be closer to her family.

Losing Mark was a blow for all of our papers for obvious reason: He was our senior staff writer, he can tackle any subject, he’s our best courts reporter and he has great relationships throughout the region.

Selfishly, it also was a blow for me personally. Christina likes to joke that I married Mark before she could.

A few years back, one of his stories got published under the byline of “Mark Rushing,” which amused everyone who knows how close the two of us are and the depth of our bromance.

Said bromance began my first day at Iowa Information during my first stint here. On that fateful day in November 2014, editor Jeff Grant had the foresight to sit me next to Mark, who was thrilled to see me and asked me if I wanted to grab a drink after work that week.

We wound up at the former Schottsy’s Bar & Grill in Sheldon — I also met Bob “Burger Bob” Sundstrom that night and I probably can’t publish parts of that story — and we got to know each other a little bit more.

Mark and I are both fans of the Kansas City Chiefs and Royals and our college teams — Kansas for me, Nebraska for him — are former Big 8/Big 12 rivals so we got some trash talking in too.

From there we also talked about journalism, how a Kansas City, KS, native and Omaha, NE, native both moved to Sheldon — short answer: The N’West Iowa REVIEW — and much more.

Between sitting next to each at work and hanging out with each other outside of it a real-true friendship developed. I always liked bad jokes and puns but being around Mark extrapolated that to the extreme, although he remains the one-true “Pun-isher.”

When I was considering moving back to Sheldon in 2018 to take the job I now have, I consulted with the Mahoneys as well as Josh and Bri Harrell to make sure they would all still be around.

Additionally, I was worried Mark would think I took an opportunity away from him by getting the job since he was the guy on staff with the most tenure outside of Jeff Grant, sports editor Scott Byers and photographer/writer Rylan Howe, who works out of our Lakes Bureau.

Besides both couples reassuring me they had no plans of leaving Sheldon anytime soon — can I call @OldTakesExposed on the Mahoneys? — Mark let me know he was more than OK with me getting the job.

He thought about it but he didn’t want the many responsibilities that come with the position and he was more than comfortable with his own beats and being in charge of The South O’Brien Sun, another one of our publications that’s exclusive to southern O’Brien County residents. He also was pretty happy to get his friend back in Sheldon and the office.

That reassurance from him on top of all the other recruitment tactics let me know this was the right move for me, although there have been some bumps in the road, but that’s to be expected with any opportunity you pursue.

Mark and I have been through a lot together. In a little less than six years, we’ve been there for each other through some of our highest and lowest moments.

I was a witness at his legal wedding ceremony with Christina, gave a speech at their vow renewal and held their daughter in the hospital a day or so after she was born.

Mark and Christina picked me up from the hospital after my car accident in 2018, they have let me cry and/or vent about stuff plenty of times without complaint and no one can get forget the infamous tubing trip.

We also have a ton of inside jokes and nicknames for each other some of which have spilled over with people who only know Mark via my social media posts about him.

Mark’s only nicknames when he moved to Sheldon were “Baloney Mahoney,” “Mark State Park” and “Mr. Modale. Those first two were terrible but Nebraskans coined them and I’ll just leave it at that.

In addition to the “Pun-isher,” Mark leaves here also known as Markelton K. Moose Sr., The Twitter-less Mark Mahoney, Old Man Mark, the Ruiner-of-Things and, for that extra hyperlocal touch our company specializes in, H.C. Lane.

I’ll miss hanging out with all three Mahoneys regularly and I do plan on spending more time in Bloomfield now than I ever imagined I would.

Mark, I’ll miss the pun battles, watching our Chiefs torment and delight us, making fun of you being the world’s oldest millennial and you trolling me with terrible jokes and much more.

I’m sad for me and our readers but I’m happy for you guys. Also, I remember the message you guys wrote on my cake when I left here in 2016 and allow me to return the favor: “We hope you fail. You’re dead to us now.”

First of all, Peter, thank you for the letter and I look forward to continuing this conversation with you in person once that becomes less ris…

Take 5: Pedicures are gross, but so good