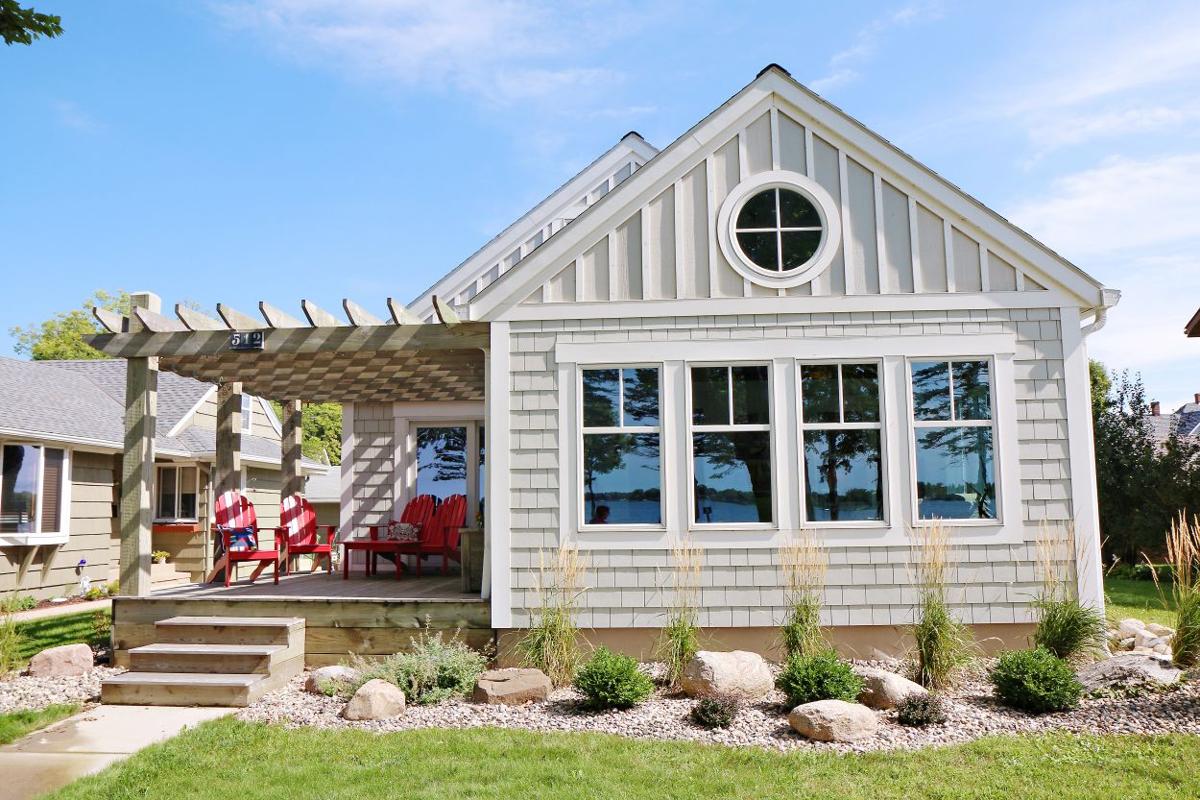 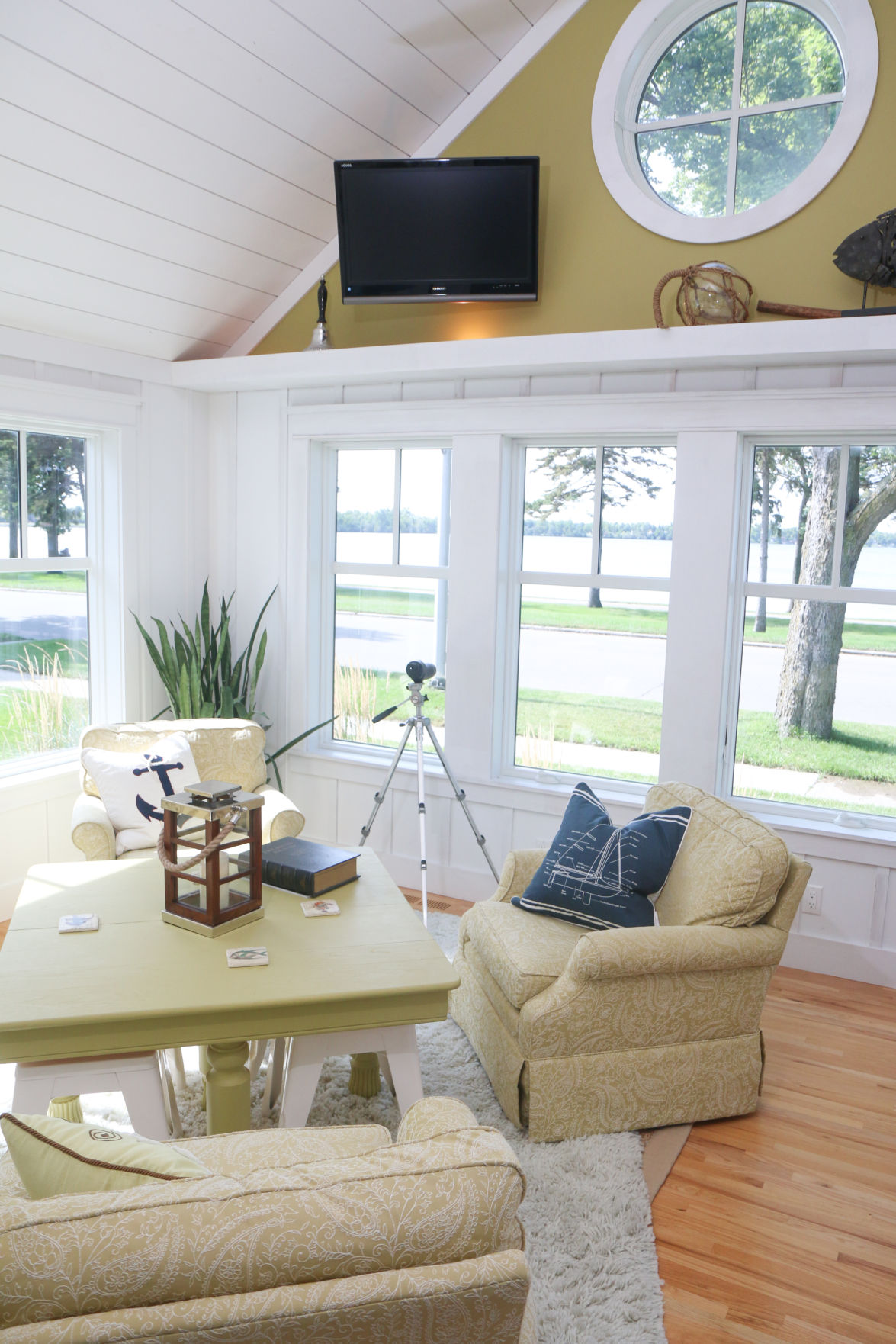 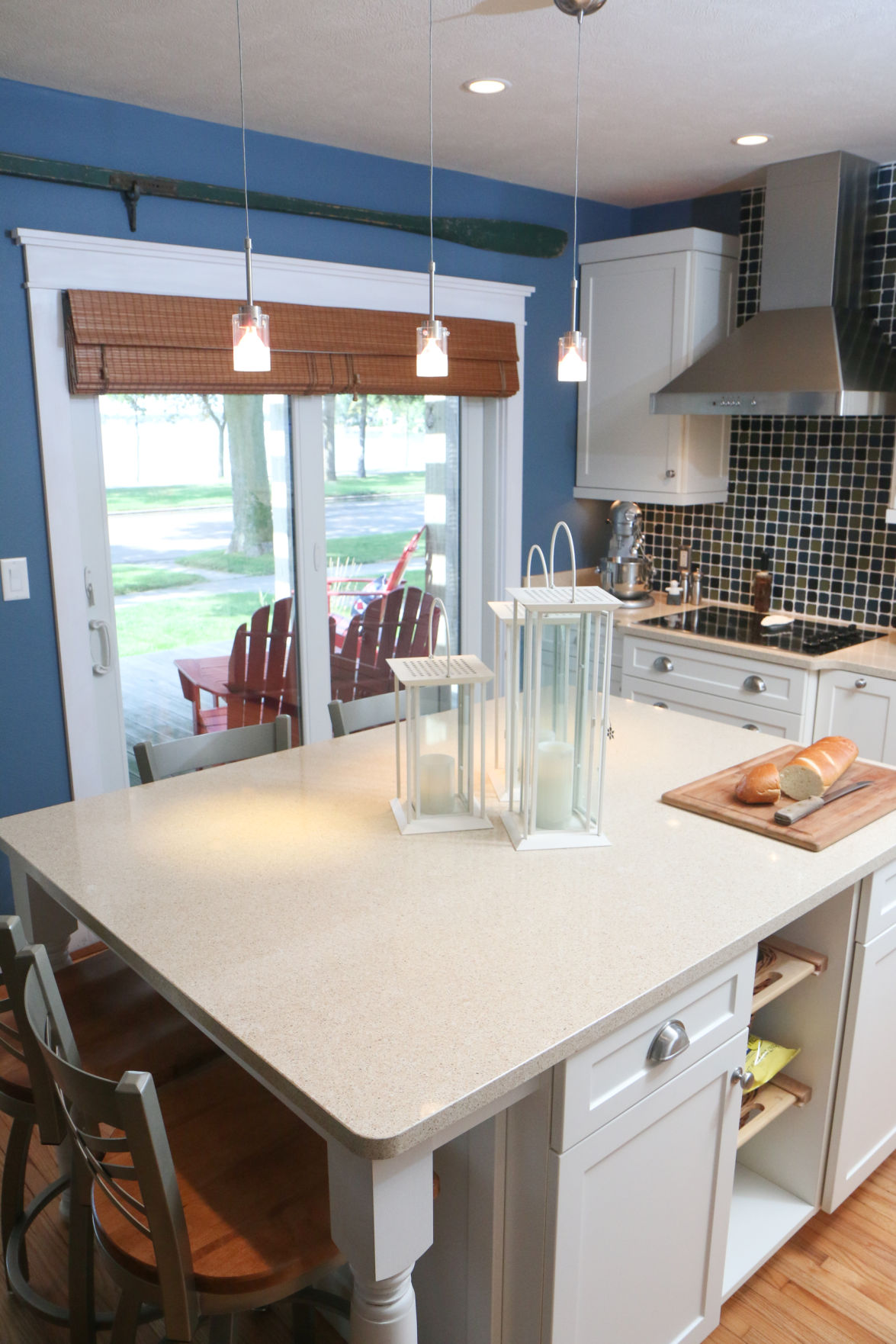 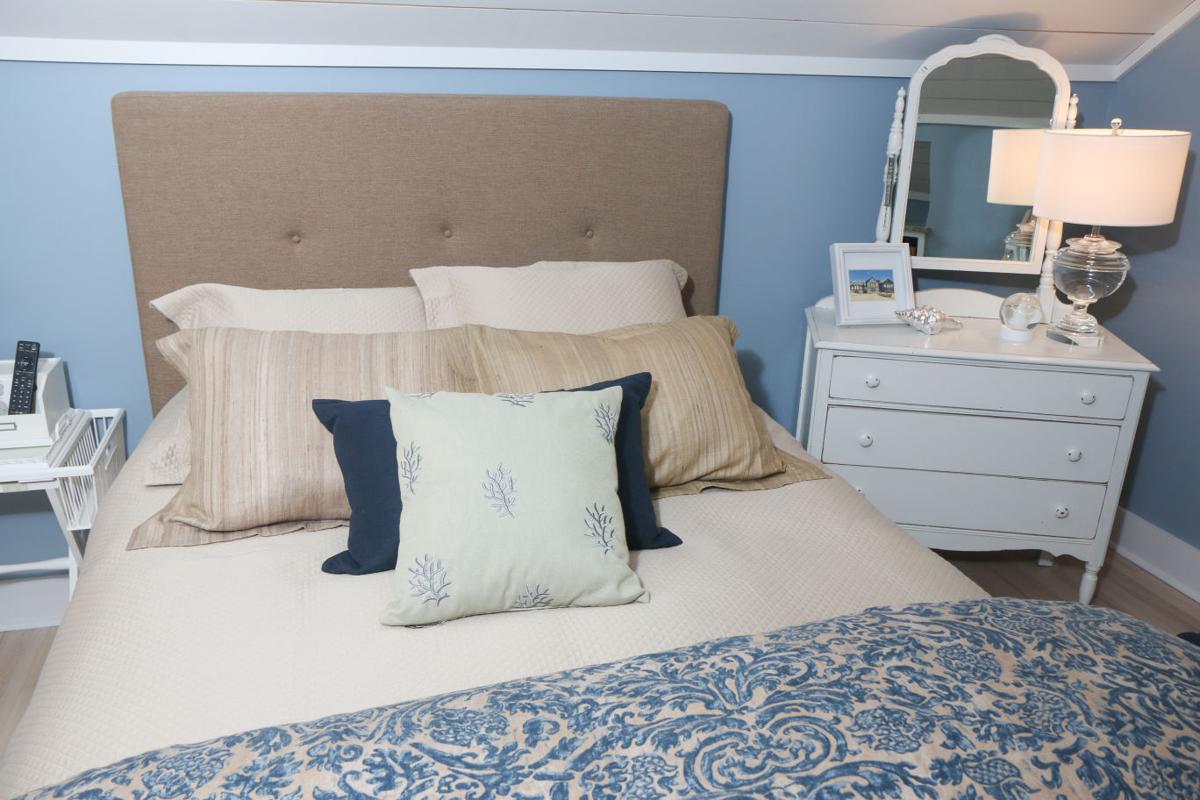 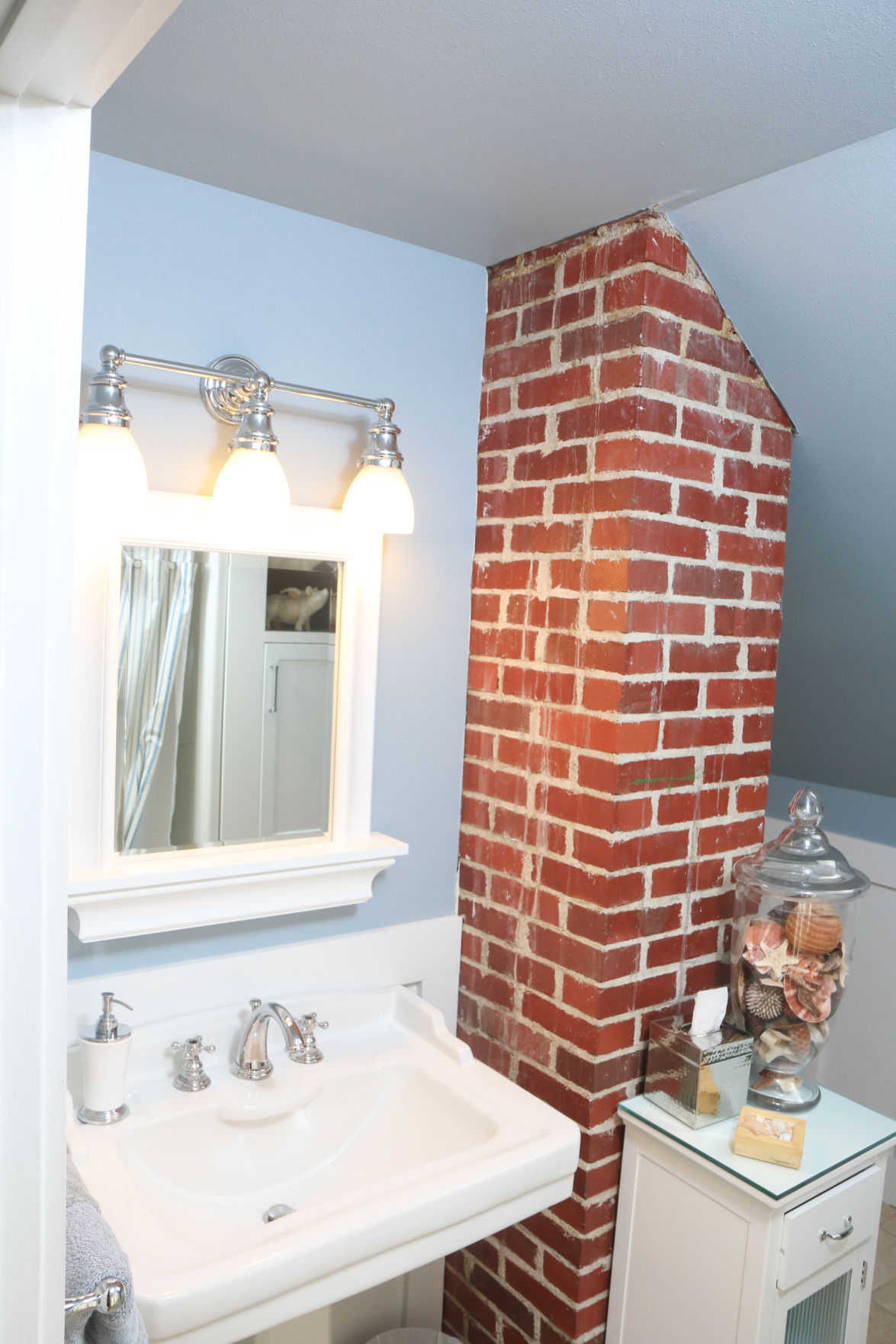 Scott and Greta Kraft have their everyday home, a lake cottage and a cabin. Conveniently enough for them, all three are rolled up into one house.

“With our crazy lifestyle we wanted something comfortable and since we don’t get a lot of time to vacation it’s our lake house, our cabin and our home all in one,” Scott said with a laugh.

They were able to create all three in their 1940 house right off of Lake Okabena in Worthington, MN.

The Krafts actually already owned a home in Worthington that they had completely remodeled with the exception of one bedroom when they started to look around just so they could see what was out there.

“We were working on a house on Lake Avenue and we were just looking around at that point to see if there was anything out there that sparked our interest,” Scott said.

They knew that there was this one little house that was empty and hadn’t yet been put on the market so they went to check it out. Thanks to a friendly neighbor with a key, Scott and Greta were able to tour the house before it even officially went on the market.

When the Krafts first took a look around the little 1940s house next to Lake Okabena, it was obvious the home would need a great deal of work. It would take a couple with vision to see beyond the leaky pipes, small choppy rooms, carpets everywhere that needed to come up, and walls that were a unique shade of purple with wallpaper.

“When we looked at it there were about 10 5-quart ice cream pails hanging from the ceilings in the basetment,” Scott said.

“I don’t think if you were a normal person, most people wouldn’t want to take on a project like this,” Greta said.

Thankfully for the historic lake cottage, Scott and Greta aren’t just normal people and they have vision to spare.

They own Kitchens and Baths by Greta, and they help people with new construction projects or the design and remodel of current homes. They not only had the vision, they had the skills and experience to get their hands dirty and do a lot of the work on the lake house with their own hands.

But even for the Krafts, the amount of work that was needed was a little daunting and it wasn’t an easy decision for them to make. But this little house had one thing their current house just didn’t. The lake right out the front door.

“We came back four to five times and just sat on the step. We looked at the lake and thought, ‘Gosh, that’s nice,’” Scott said. “It was the lake view that sold it.”

They bought the house in the fall of 2005 and started work immediately; they have continued to work on it as their schedules allowed. First they tackled the upstairs and transformed a large empty space into a bedroom, bathroom, sitting area and little office nook.

“It became our little refuge as we worked on the rest of the house,” Scott said.

It was their refuge when they re-wired and put in new plumbing throughout the house, created a kitchen from scratch in a space that used to be a bedroom on the main floor, constructed a butler’s pantry, remodeled and expanded the first-floor bath, and continued while they added another bedroom, bath, office and living area in the basement.

In 2010, they decided they wanted to take full advantage of that lake view that they loved so much so they expanded the front entry and added a sunroom filled with windows and 14-feet tall ceilings. The sunroom has become the room where everyone congregates.

“Sitting here and watching the water is soothing to the soul,” Scott said.

“When people come to visit we’re always in here, and we enjoy it year-round,” Greta said.

When they were working on remodeling the lake house, the Krafts made sure that even though they were giving this old house new life, they still wanted it to retain that old charm and make sure everything new fit in with the old.

“We wanted it to feel cottagey on the main floor and upstairs to reflect the location on the water,” Greta said. “We were careful when we built because we wanted it to look old and like it matched the rest of the house.”

They used greens and blues for a lot of the color palette.

“We used green and blue because we wanted to bring the outside in,” Scott said.

They added a fireplace for warmth on chilly nights and decorated the main floor and upstairs with cool nautical pieces that they found including an ice chest that looks like a port hole, a stair railing that is an old wooden oar.

When you travel downstairs is when you get transported to a northwoods cabin. The basement is complete with heavy, comfortable leather furniture, wood accents and lots of bear decorations. A built-in shelf conceals the entrance into a ‘secret room,’ the utility room.

In the future, the couple would love to add an attached garage with an apartment overhead and maybe turn their home into one more thing. A bed and breakfast.

With what they’ve accomplished thus far, it’s not hard to image this lake house as four things: a lake house, cabin, bed and breakfast, and their everyday home. 