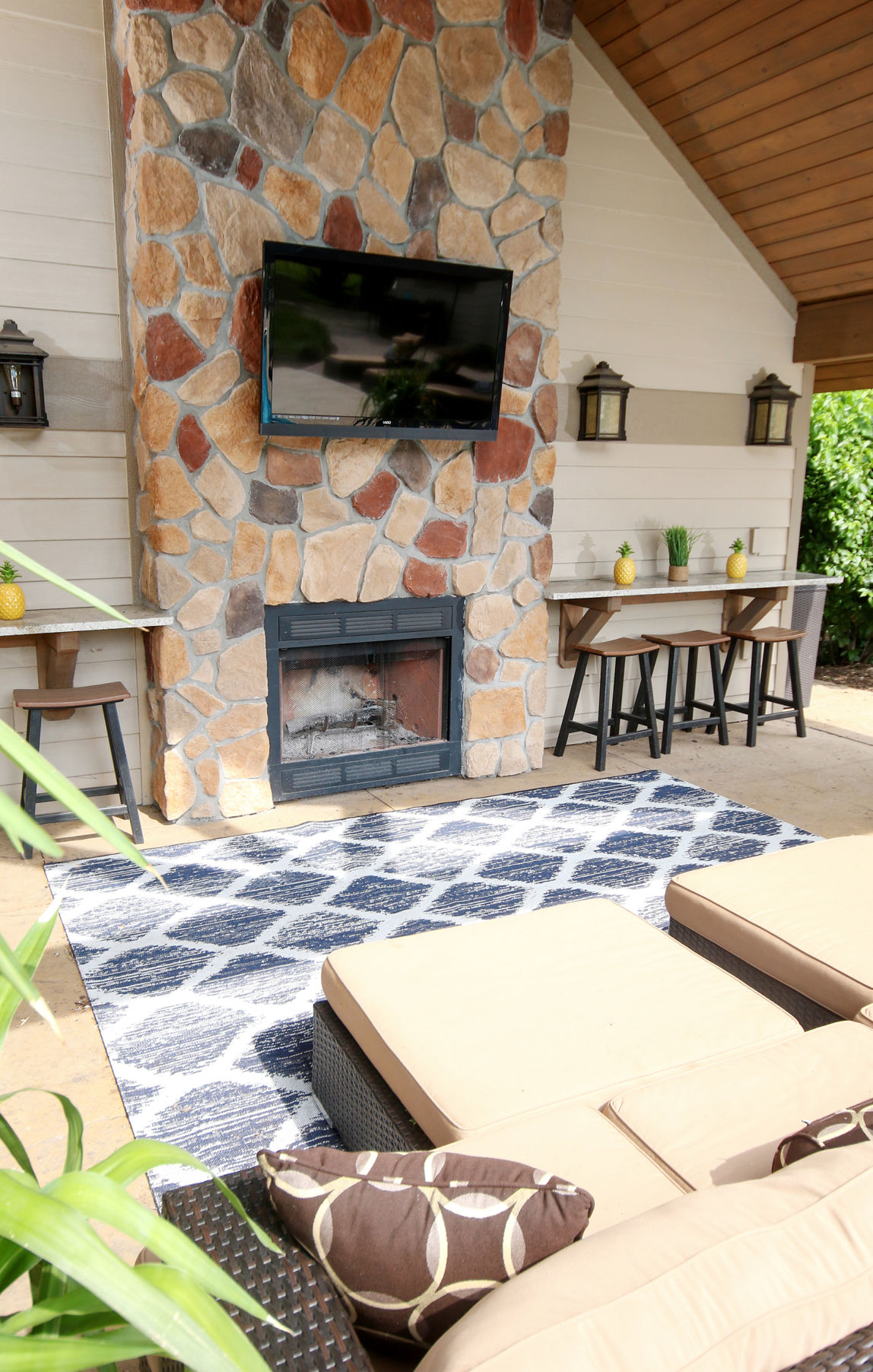 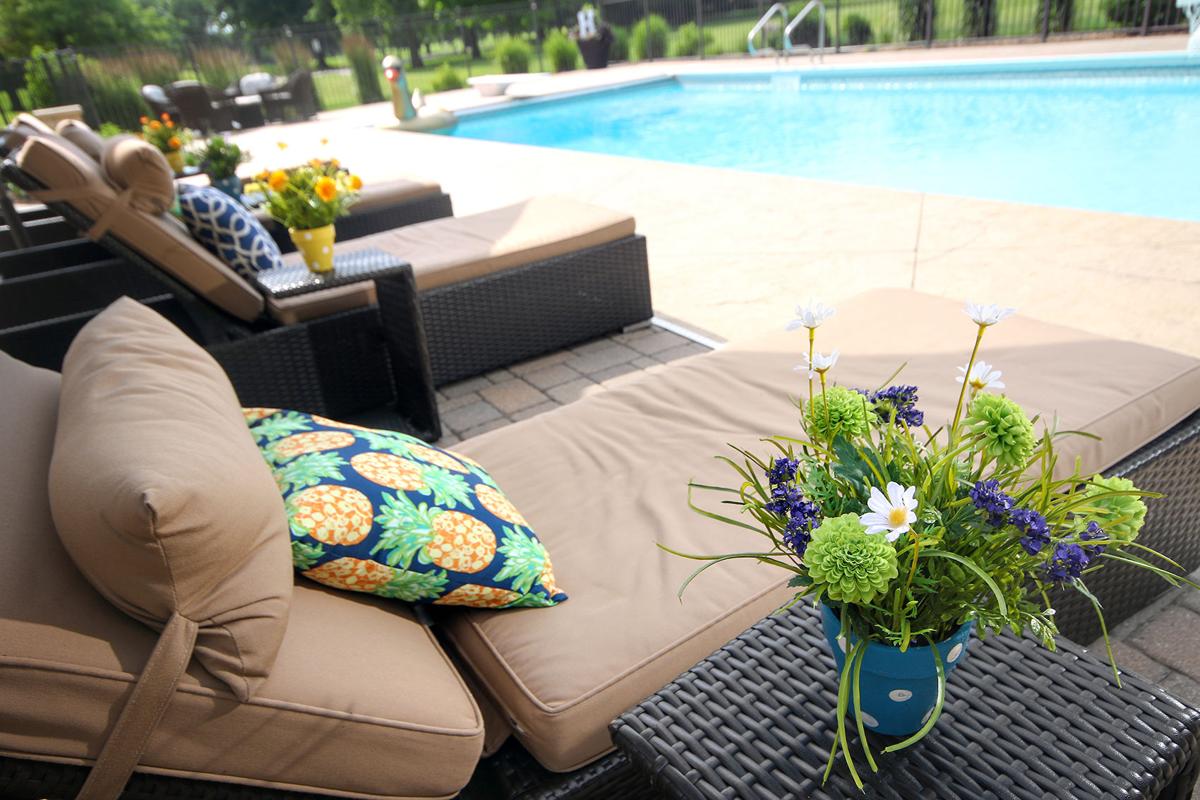 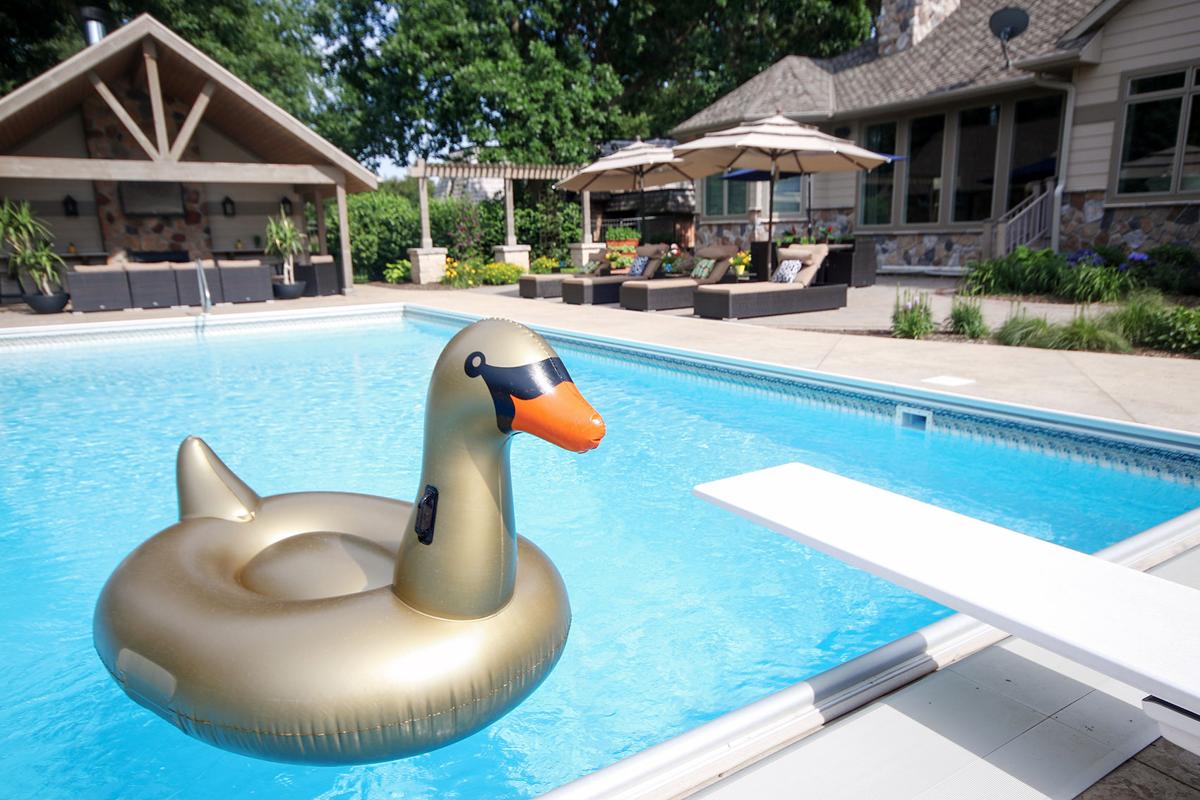 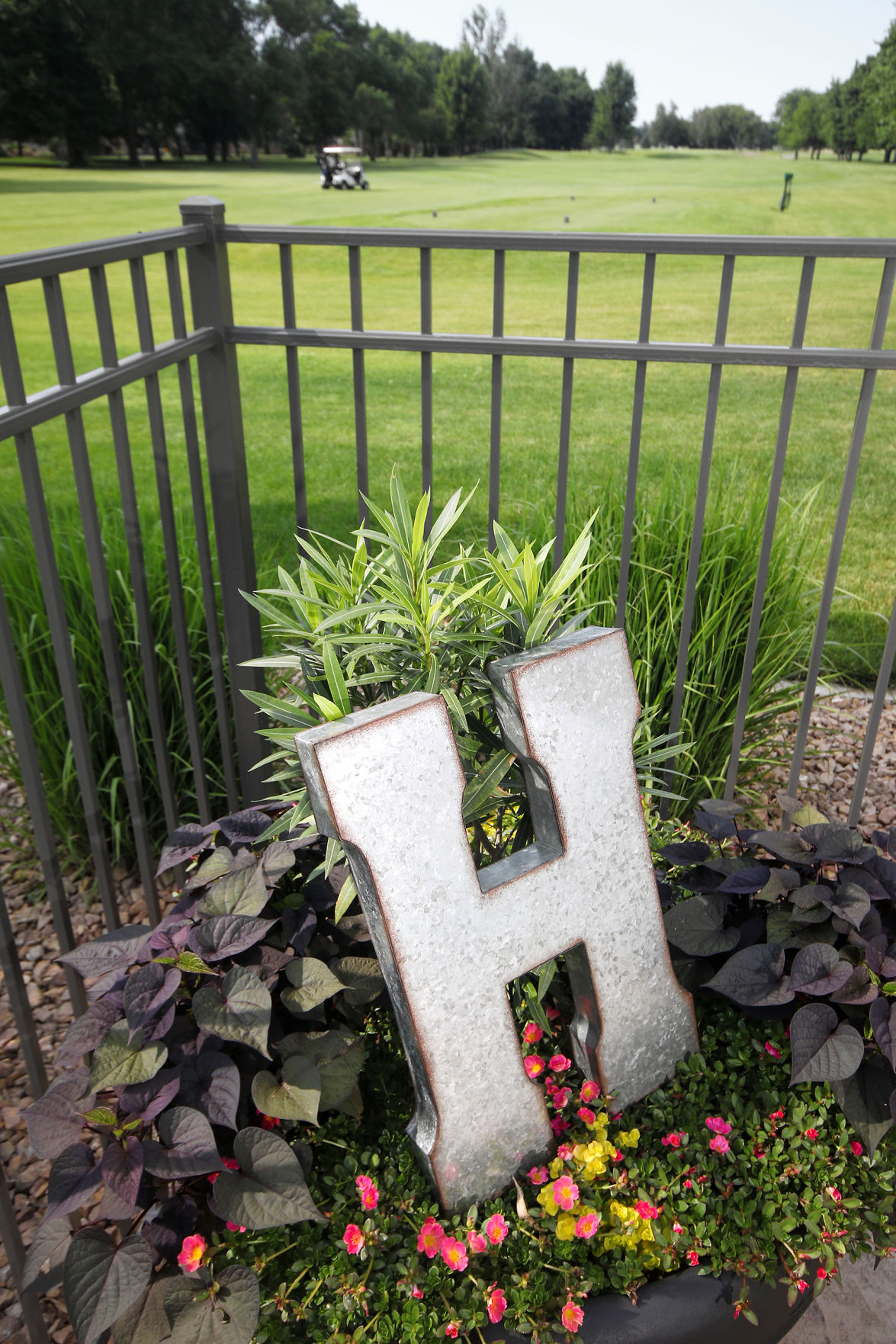 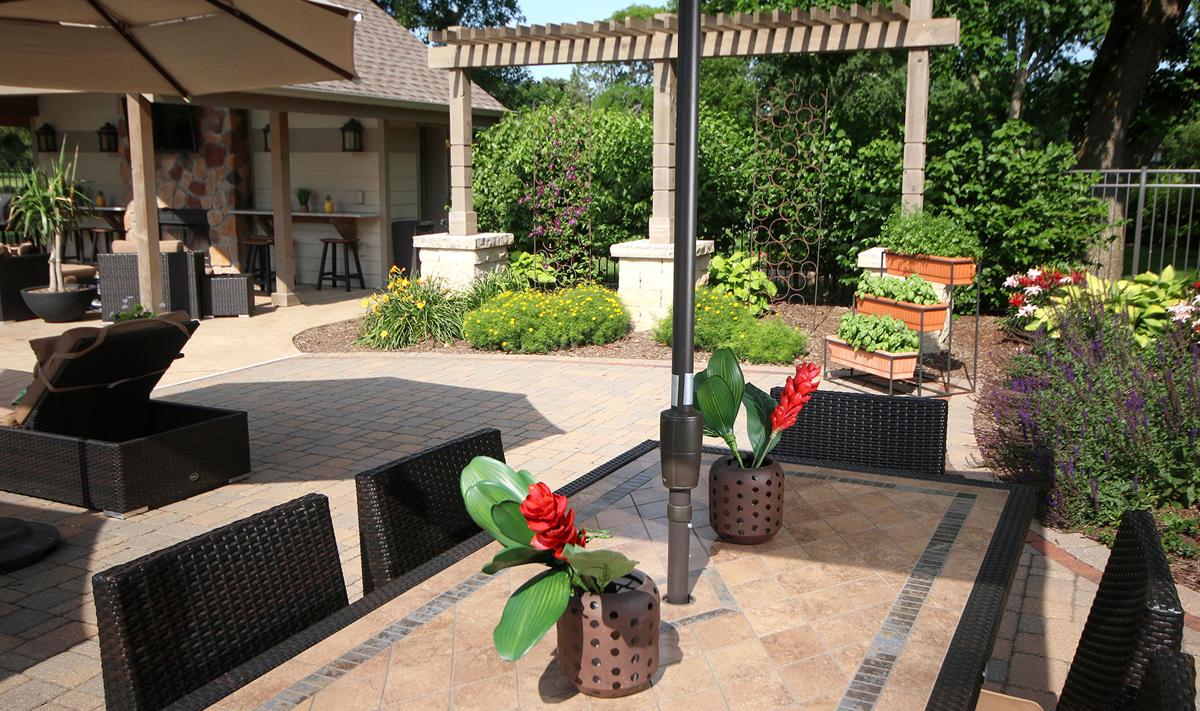 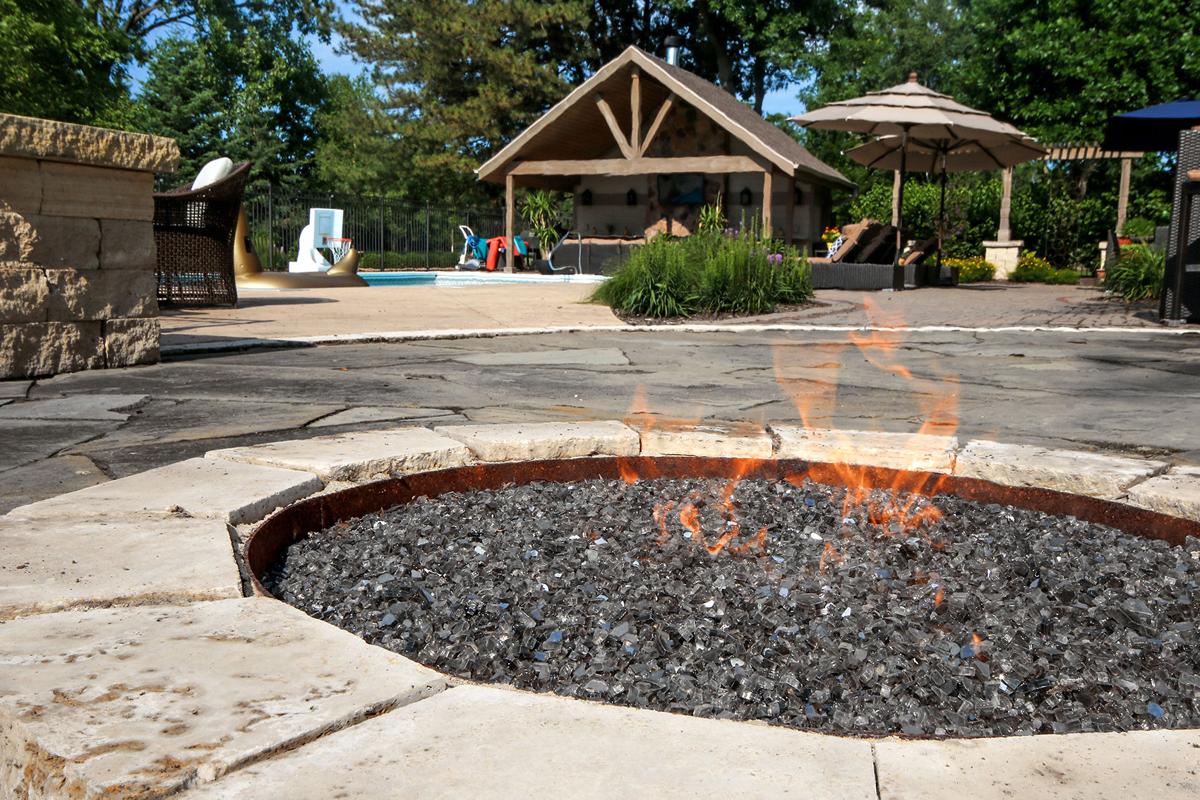 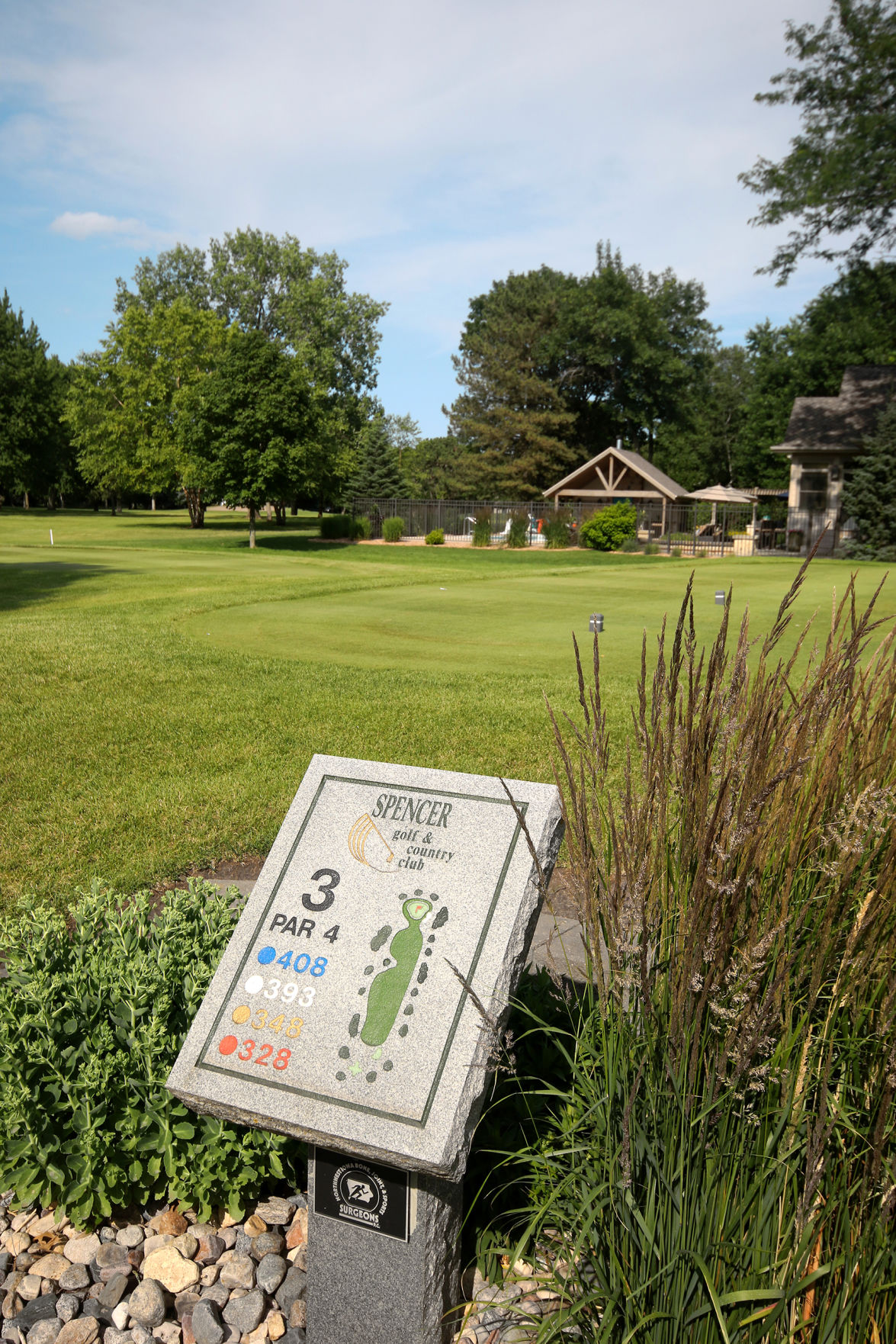 The Houghs enjoy their outdoor space in many ways. Two of the most popular are pool parties and tailgate parties.

Jason and Josie Hough built on an empty lot that cozies up to the tee box for the third hole at Spencer Golf & Country Club. They moved into the home in 2009, but it would be a couple more years before their outdoor space came to fruition.

“We went the first two summers without the pool,” Josie said. “We knew we wanted it but we wanted to figure out how it would work first and how it would fit with our schedules and lifestyle. We weren’t sure if we wanted something at the Lakes instead.”

Turns out after school and work and sports practices they didn’t want to pack everything up to head to the Lakes, so the pool won out. It worked out quite well, and was a quick process. The pool was put in place in 2011 and has been a hub of outdoor activity ever since.

With two teenage boys, Chase and Drew, and a 12-year-old daughter, Reese, the pool area has become a magnet for gatherings.

“It’s a pretty busy place in the evenings with teenagers, which is nice for them to have a place to hang out,” Josie said.

While the kids take over the pool at night, Josie noted that the mornings belong to the parents. Enjoying a cup of coffee and listening to the sounds of the mowers getting the golf course ready makes for a great way to start the day.

The pool is heated May-October, but that doesn’t stop at least one of the Hough children from enjoying the water a little bit earlier.

For the past several years the Houghs have held their own version of a polar plunge on Easter Sunday. It may not be as cold as the frigid waters of West Lake Okoboji during Winter Games, but it’s a tad chilly nonetheless.

It is unique in that it is a salt water pool. The benefits of the salt water chlorination process are that the water is softer, and not as abrasive as a normal chlorine pool, making it especially helpful for people with sensitive skin.

Stamped concrete surrounds the pool, which has an automated retractable cover, eventually merging with the patio brick that runs from the chaise lounge chairs near the pool up to the house.

If they’re not enjoying the pool itself, chances are the Houghs, along with family and friends, are gathering around the pool house for their version of a tailgate party.

“We knew we wanted a wood-burning fireplace and a place to watch games. That’s my favorite thing to do out here and it’s something our whole family really enjoys. If we’re not at a game we’re usually watching them here,” Josie said.

That means a lot of the Twins in the summer then Hawkeyes and Vikings games in the fall will have the Hough family cheering on their teams from the backyard. The television is mounted above the fireplace, which is usually blazing for those crisp autumn football games.

The peaks of the pool house and the stone work match the main house for a consistent look.

An outdoor dining table provides a place for an outdoor meal with family or friends. A gas fire pit on the opposite side of the backyard from the pool house provides more warmth from a unique tempered glass arrangement

The Houghs had a fence built that would be visually pleasing and allow for a view of the golf course while providing pool safety and security at the same time.

Of course the golf course was also a big factor in where the Houghs decided to make their home.

“That definitely played into it. We wanted to be on the course and it’s nice because in the evenings we can get out and just play a few holes if we have time,” Josie said.

It also gives them a front row seat to the annual Northwest Amateur Tournament that Spencer Golf & Country Club has hosted since 1921.

“The first time is really early so we come out here with our coffee to watch and the tee box is right there, so it’s a fun place to be and really cool to watch our boys play in it,” Josie said.

With the golf course, pool and patio, taking up the vast majority of the backyard, not a lot of room needs landscaping.

The Houghs have filled the remaining spaces mostly with hardy perennials including daylilies, hydrangeas and black-eyed Susans. Overall it helps soften up the look of the brick and concrete as well as provide a bit of noise and vision barrier between the yard and golf course. Josie grows a couple herbs such as basil and cilantro. The Houghs also cultivate tomatoes and peppers in raised beds just across the fence with their neighbors, the Schmidts.

Speaking of neighbors, they’re another reason the Houghs enjoy their home and location on the golf course.

“We’re so lucky to live on hole three,” Josie said. “There is a great mix of ages with the kids. Sometimes with a country club the vibe can be stuffy, so it’s nice to have young couples raising families here and really throughout Spencer.”

The Houghs paired up with the Schmidts to host the Arts on Grand fundraiser, Backyard Bach & Blues, a couple years ago, and their children often make s’mores together in the Schmidts’ outdoor fireplace as well.

“It was a nice setup with Bach & Blues. We had Damon Dotson playing here by the pool and they hosted the meal in their yard. It’s a nice communal space for a party like that,” Josie said. “We also host end of the year little league parties, birthday parties, and just impromptu gatherings. Sometimes it’s just us moms hanging out and sometimes you need that. It’s a great marriage of family and fun.”

Some neighbors aren’t ones you might expect on the golf course, but are ones that provide a valuable service.

“At night the bat population is crazy. It’s actually fun to watch as they fly and dip going after insects. Jason actually put a bat house up, too,” Josie said.

All those bats dine on mosquitoes and other insects allowing the Houghs to spend more time enjoying their outdoor space and less time applying bug spray, or worrying about the mosquito bites that can often coincide with late summer outdoor fun.

And outdoor fun is something the Houghs want to enjoy as much as possible. Pool parties in the summer. Tailgate parties in the fall. Some of the fun even stretches into winter.

“As beautiful as it is in summer, it is 10 times more beautiful in winter,” Josie said. “When you look north across the fairway it’s unbelievable, which is nice because around here you get so much more winter than summer.”

Until the weather turns it will be cannon balls in the pool and Twins games on the television as the Hough family makes the most of their outdoor space on the third hole of Spencer Golf & Country Club. 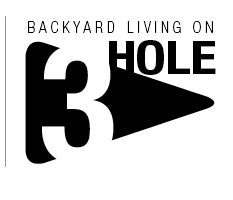