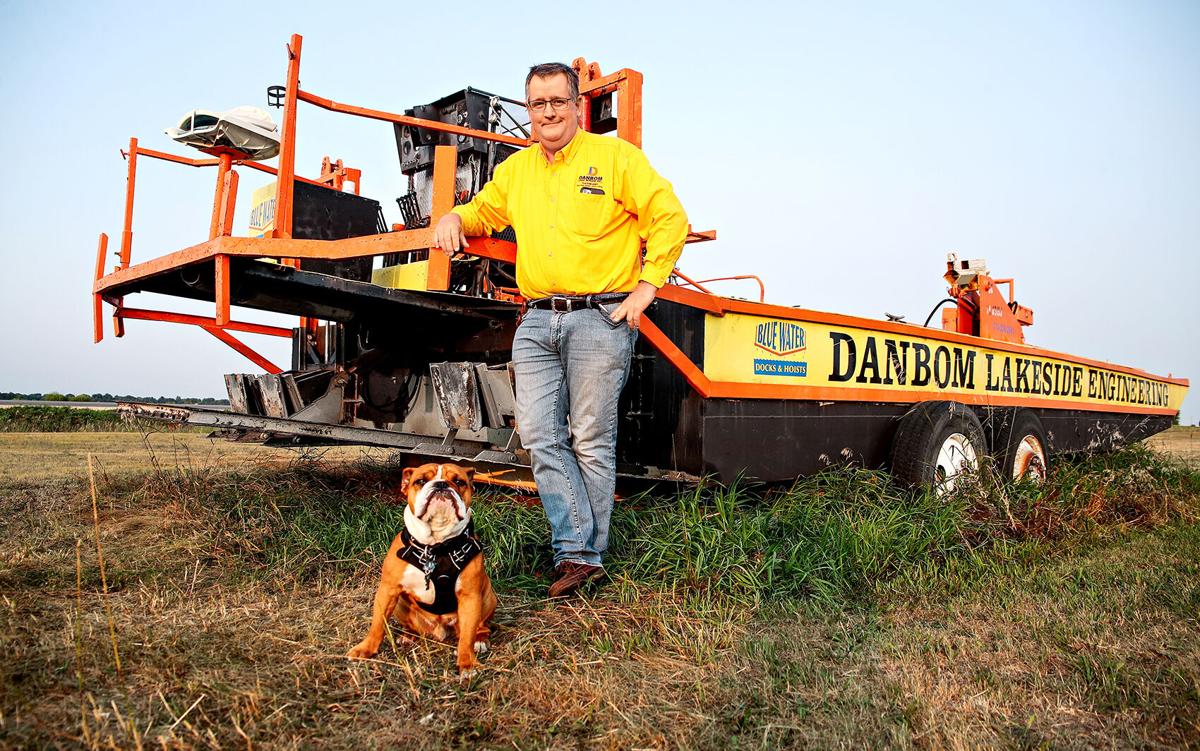 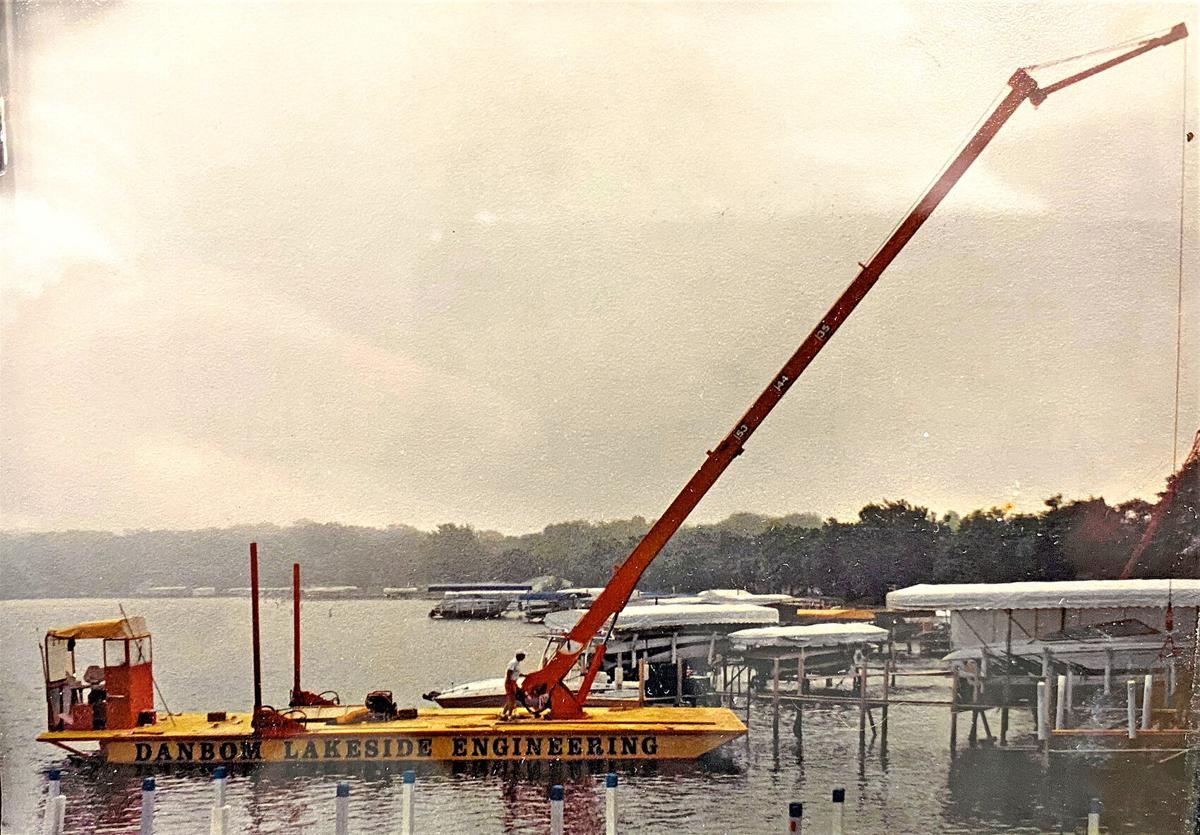 Thousands of boat hoists and miles of dock circle the perimeter of the Iowa Great Lakes.

It’s a snapshot of activity three months out of the year.

But from late September to early April the scene is much different. Hoists rest in awkward positions along the shore with stacks of planks or sections of dock resting nearby.

Like fish out of water, they are not in their element.

Getting all those pieces into their element each season is a massive undertaking for dock and hoist installers, among them Danbom Lake Service, the longest running installation company in the Iowa Great Lakes.

It all began with a 14-year-old teenager.

Jerry Danbom grew up in Milford, with his parents owning and operating Danbom Resort along Terrace Park Beach on West Okoboji Lake. Always a hard worker, Jerry found seasonal employment working for dock builders. Soon his entrepreneurial spirit kicked in and he ventured out on his own.

It was 1958 and Jerry was just 14 years old when he started his own dock-building business and hired his first employees. Among the criteria for those he hired — they had to be 16 and possess a driver’s license. He couldn’t drive to the work sites himself, so his employees had to.

Dock and hoist installation was hard work, all manual labor, with pieces being assembled and disassembled each season, and carried to and from shore.

During these early years Jerry built his first hoist in his parents’ garage and began thinking of ways to simplify the dock and hoist installation process.

At about the same time local resident Cam Ogg, a college engineering student, constructed a wooden barge with attached crane for a class project. Jerry immediately saw the efficiencies of using a crane for hoist installation and bought the heavy barge.

That crane served Danbom well for many years, and through many overhauls. The bottom and sides were eventually sheeted with steel, and when the deck began to rot it too was replaced with metal. From drab wood to bright orange and yellow, the barge was recognizable all over the lake. The original barge still exists, though no longer in service.

When Jerry married in 1965, his wife Suzie became involved with the business, doing the bookwork out of an office in their home.

Suzie recalls the business being much more seasonal in the early years than it is now.

“There was such a rush in the spring,” she said, “And we were under the gun to get everything out before the ice froze in the fall. There were many long hours.”

Jerry used their home garage to build and weld hoists, but eventually his work outgrew the space and it was time to find a better location for their blossoming business.

At the heavily-trafficked intersection of Highways 71 and 86 in north Milford, a series of orange striped buildings are easily recognized as the home of Danbom Lake Service.

The campus includes a full manufacturing shop for building and rebuilding, a paint shop, storage and cleaning space for canopies, a show room and business offices.

On a Friday morning in early June the phones ring with customer requests and the place is bustling with employees getting work orders and heading out on calls.

As Suzie recalled, summers were more leisurely during the early years, before service work became a significant part of the business.

Many longtime dedicated employees in various departments have been key to the company’s success.

Jensen is especially appreciative of that depth of knowledge as he learns the business. He is a recent addition to the Danbom team, entering the picture after Jerry’s death in late 2020. While Jensen’s background is not in the lake service business, he has known the Danbom family most of his life and has a passion for helping people.

As a business investor, Jensen describes himself as a vision person, wanting to develop people and lead companies to even better things.

He has many plans.

“We want to improve our manufacturing processes — it needs to be expandable,” he said. “And we need systems to both build and manage.”

Jensen reminds himself of the founder’s “can do” attitude as they look ahead. If someone told Jerry “you can’t do that” he would rely on his mechanical instincts and years of experience to find a solution. “He would always figure it out,” Jensen said.

Finding solutions and solving problems is what Jensen sees the company continuing to do as they move forward.

Working in tandem, the future looks bright for Jensen and the Danbom family.

“I’m very happy,” Suzie said. “Irving Jensen is the perfect person to have this company. He’s a forward-thinking person that’s going to make the company better.”

Much has changed in the 63-year history of the business, but one thing has not: They remain committed to the same idea that inspired a 14-year-old to start the business in the first place — helping everyone enjoy the beauty of life on the waters of the Iowa Great Lakes.

Jerry Danbom grew up in the Iowa Great Lakes area. Suzanne Rasmussen was from Council Bluffs.

“My parents bought their first boat in 1965. That summer we came to Okoboji and stayed at Crescent Beach,” Suzie recalled.

She and her sister, both teenagers at the time, had cruised the Arnolds Park area earlier in the day, and returned to attend the Roof Garden dance in the evening.

Jerry was working that day and managed to step on a nail that penetrated his foot. He ended up at the hospital for a tetanus shot. Despite Jerry’s painful foot, a friend was able to convince him to attend the Roof Garden dance later that night.

Jerry was not one to back down from a challenge, so the two of them made their way to the Roof Garden.

Suzie was unimpressed with Jerry at first, with his freshly shaved head and bum foot. “I tried to get rid of him,” she said.

“By the time our vacation was over he had grown on me,” she added. “I got a job at The Inn and stayed at the Danbom Resort.”

Suzie intended to return to college for her second year in the fall, but summer love intervened.

“It was a real adventure to be married to him,” Suzie said with a smile.