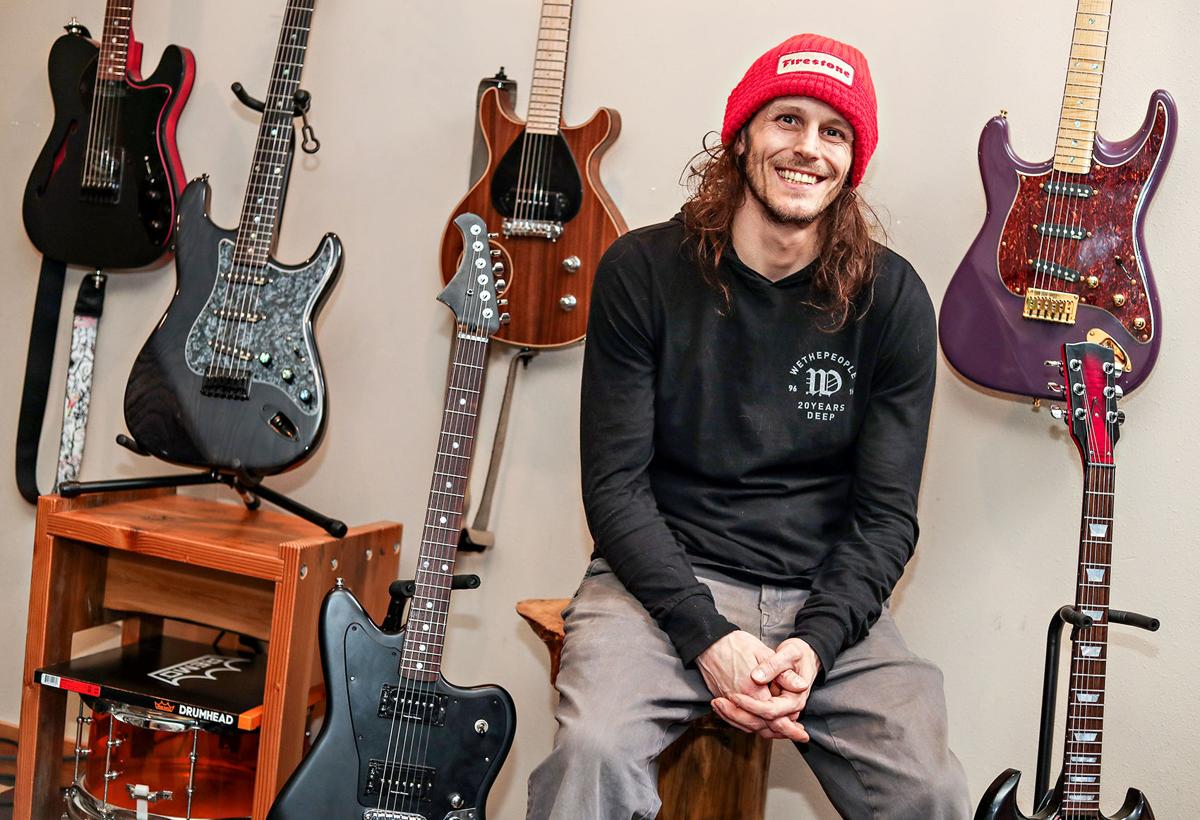 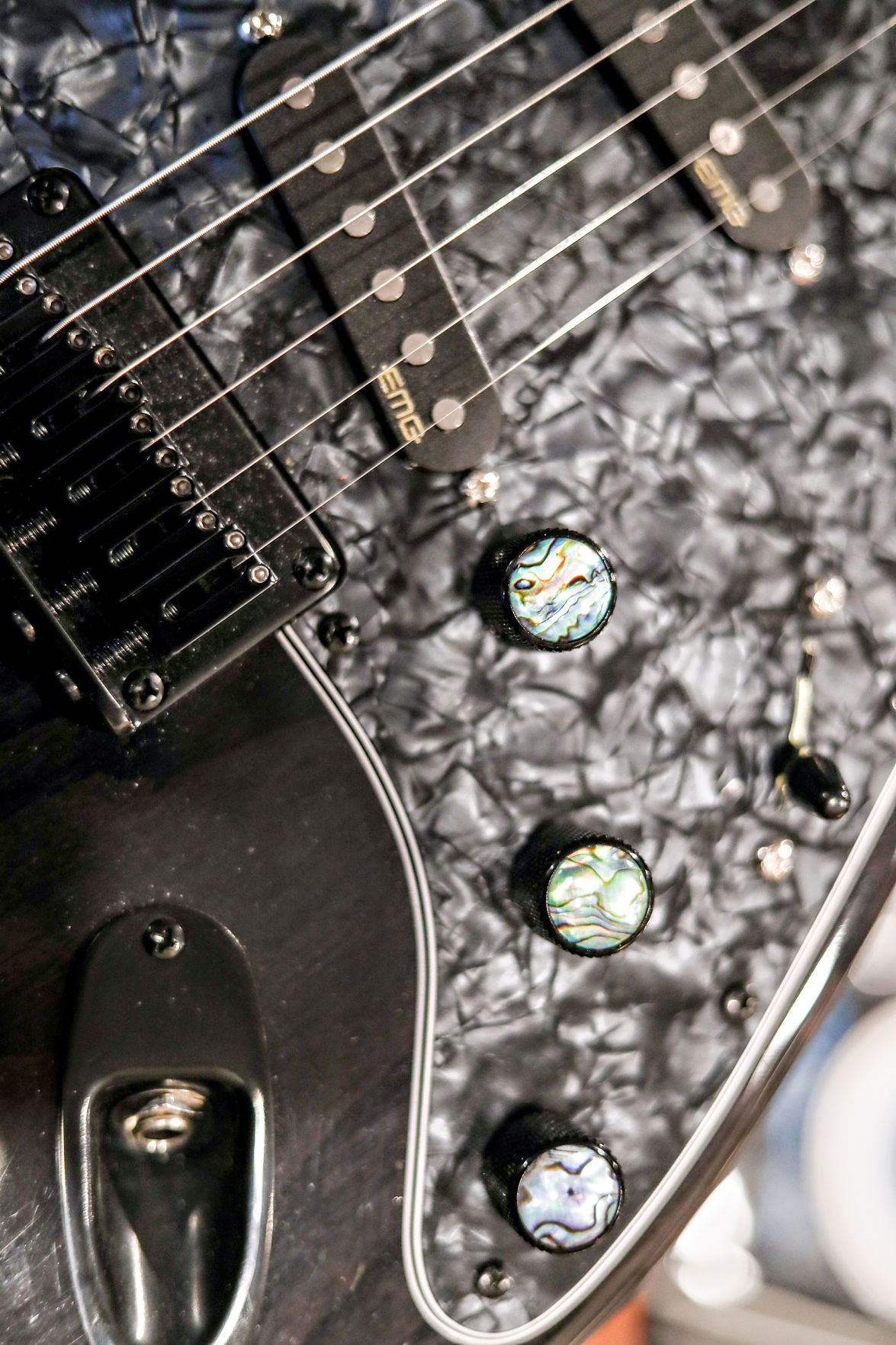 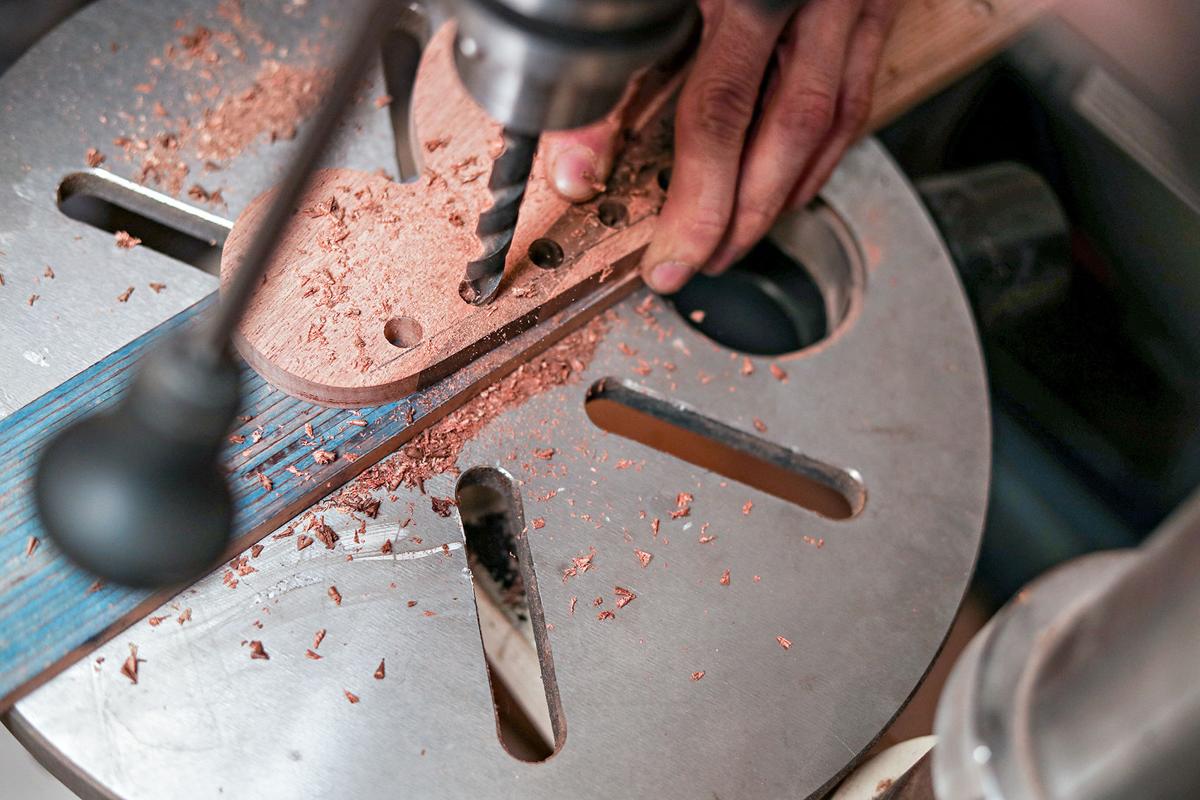 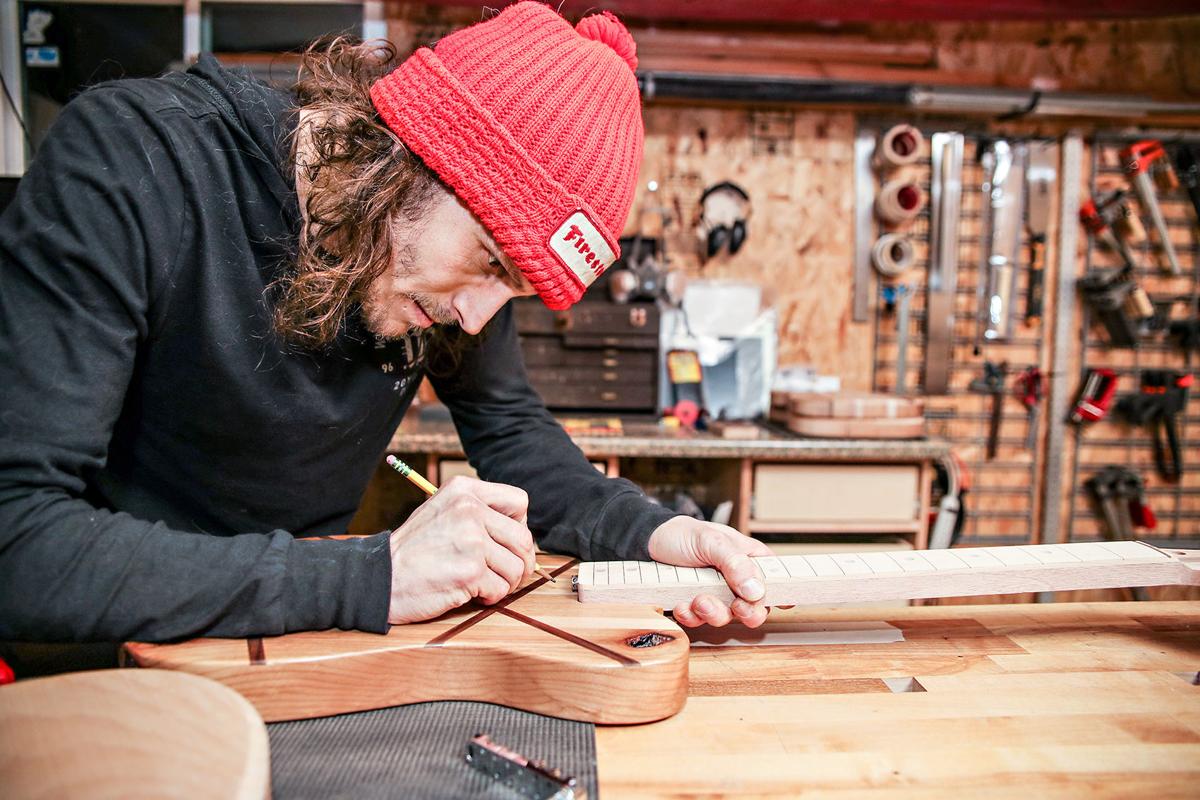 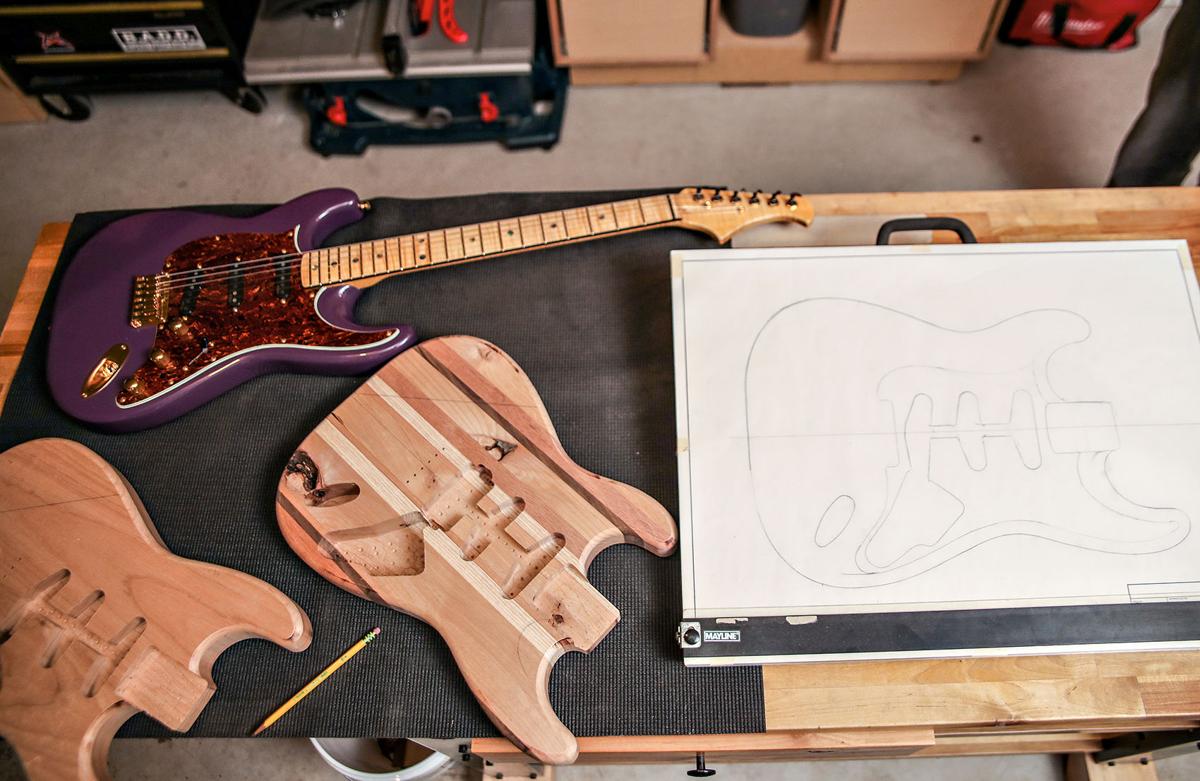 Drew Mills hasn’t been able to master playing the guitar quite yet.

So about a year ago he decided the next best thing would be to build them himself.

The 37-year-old Spirit Lake resident is a longtime drummer and plays some bass guitar, but the electric has eluded him so far.

“I wanted to start learning the guitar more so I was looking for one that I could take apart and modify and put back together the way I wanted,” Mills said.

Then a friend suggested he simply build his own.

After some back and forth about his woodworking experience and the complexities of applying that to guitars, Mills was

questioning why he hadn’t already started.

And so he went all in.

“It was like the light bulb just went on over my head. I just thought I could totally do this. Why not?” Mills said. “And after that nothing could happen fast enough. I started really geeking out about what tools I would need to get started right away.”

That’s the abbreviated version of the path to Drew Mills Custom Guitars.

The reality is that several factors came together over a much longer period of time before Mills finished his first guitar, starting with a love of music fostered from a young age.

“I’ve always loved music. It’s something I thank my parents for — they always had an awesome set of vinyl classic rock,” Mills said. “The Beatles, Eric Clapton, Led Zeppelin, Rolling Stones and my mom surprisingly enough was into some of the hair metal stuff. She loved Guns ‘n’ Roses and Motley Crue and that’s what I fell in love with. They were all very guitar oriented bands and made it stand out as such a cool instrument whether I knew how to play it or not.”

It wasn’t until a few years after high school that Mills really got into playing music himself.

“I knew a lot of people that played and it would get boring just watching them play, but it was awesome at the same time,” Mills said. “So I picked a friend’s brain about the drums, borrowed his set, annoyed my parents banging around and figuring things out.”

At one point a band called for a fill-in drummer. Mills took the gig and continues to play with the band, Remains Nameless, to this day.

The other leading factor that made the transition to guitar building smooth was his familiarity with woodworking.

Mills grew up around his dad’s custom woodworking shop and became familiar with the tools of the trade at a young age.

“I would just learn by watching and eventually started doing some things by myself, getting comfortable with all the tools needed to built custom cabinetry and whatnot,” Mills said.

So when he had to wait about a month for his new guitar-specific tools to be delivered, Mills set out to learn all he could about applying his woodworking knowledge to his new pursuit.

“The foundation was there to begin with, so during that time I watched so many videos and bought books all about woodworking stuff that is super-specific to building guitars,” Mills said. “You have to know so much about angles, depths and shapes. There are really tight tolerances you work within to get the right sound.”

The right sound can be something different from one guitar player to the next.

Mills takes it all into consideration much like a tailor takes all the necessary measurements for a bespoke suit.

Factoring in his work at Okoboji Expedition Company, Mills said if he had to start from scratch it would take about a month to get a new guitar finished.

He has completed seven guitars so far, each one unique to its owner.

“I tell them, hey, tell me exactly how you want this to be and they kind of piece together their own signature guitar, which is what having something custom-built is all about,” Mills said. “They have developed a style and can tell me that they’ve always wanted this and this and this in a guitar — things you can’t just buy off the rack — so these are truly meant for and defined by each customer.”

Mills’s favorite part of the building process is working on the neck of the guitar.

“That’s where it’s more specific to guitar building,” Mills said. “Shaping the neck. Getting the right contour, or matching one from an existing guitar. I had a buddy telling me that he loved the slim neck on one guitar and the shape on another so we made one neck out of two profiles. I had no idea how I was going to do that but the process of figuring it out was awesome.”

Handing a completed guitar to a customer and hearing it played for the first time is as good as it gets.

“That’s one of my favorite parts of this whole process,” Mills said. “Handing a guitar to someone who can play professionally and hearing what they can do with something I professionally made is pretty rewarding.”

Mills plans to eventually build an inventory along with a website to be able to provide a range of options at different price points from full custom, to semi-custom models and completed guitars ready to go.

Sometimes an idea for a new guitar starts as a joke.

“This purple one, I call it Prince or Her Majesty, turned out beautiful but started as joking around about wanting to take a left-handed guitar and build it to be right-handed,” Mills said. “So that became the challenge. I liked the way it looked but didn’t want to compromise playability, so I wanted to take it upon myself to build something that would work even though it’s not supposed to work.”

Even the paint job began in a joking manner.

“I was talking about how I was just going to paint it purple and gold and make it just as tacky as possible,” Mills said. “But I wasn’t successful. It just looks too good!”