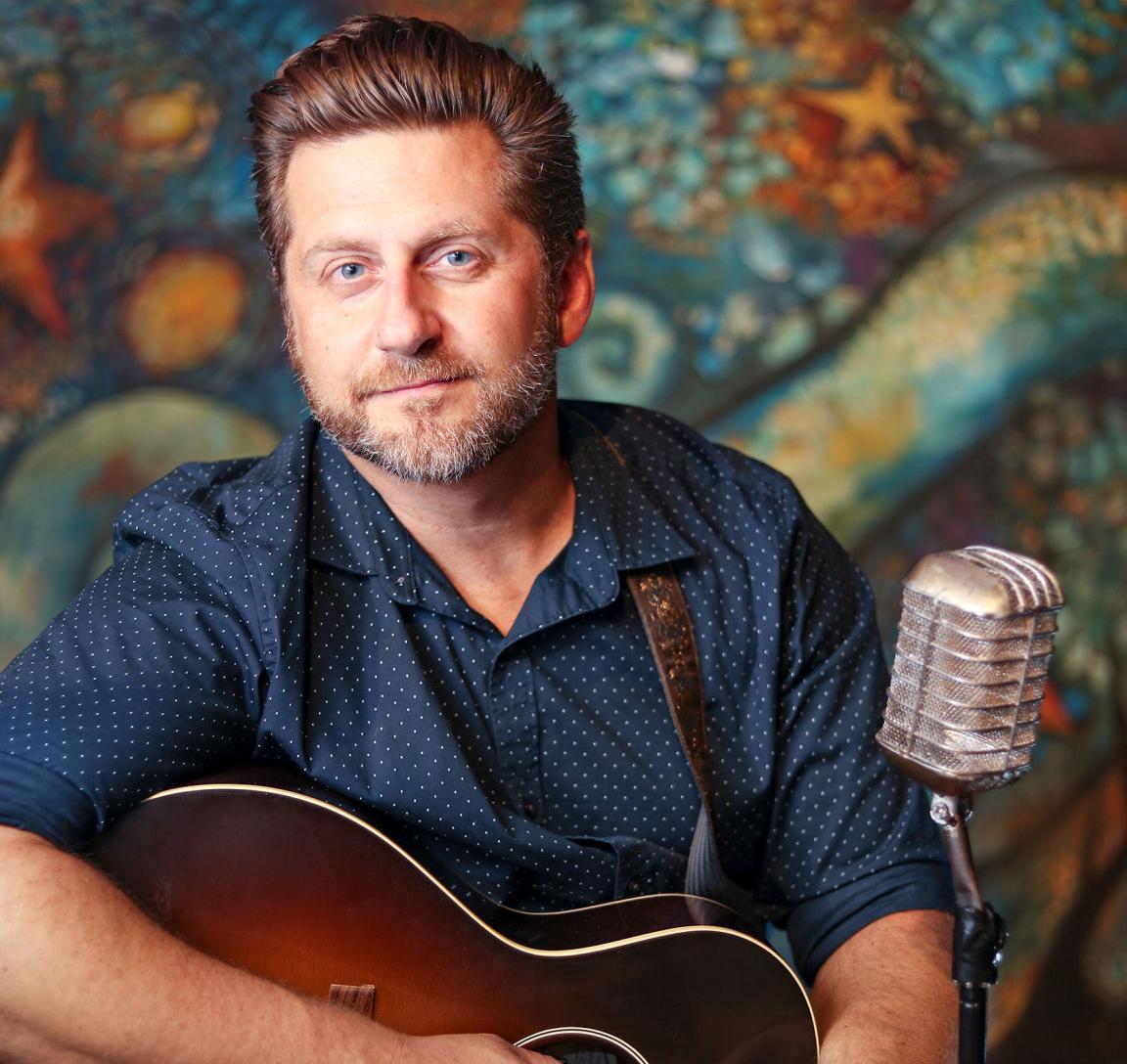 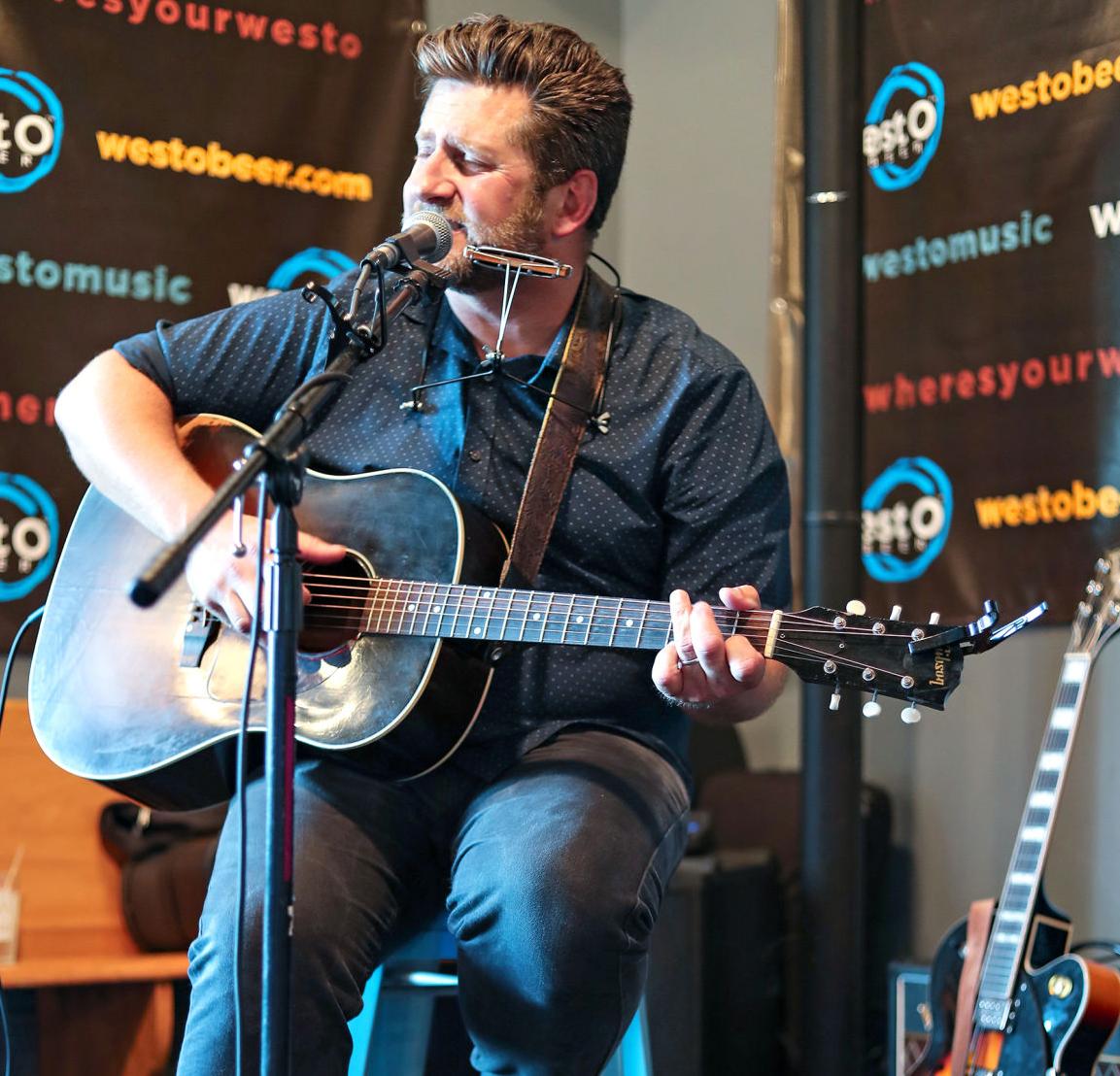 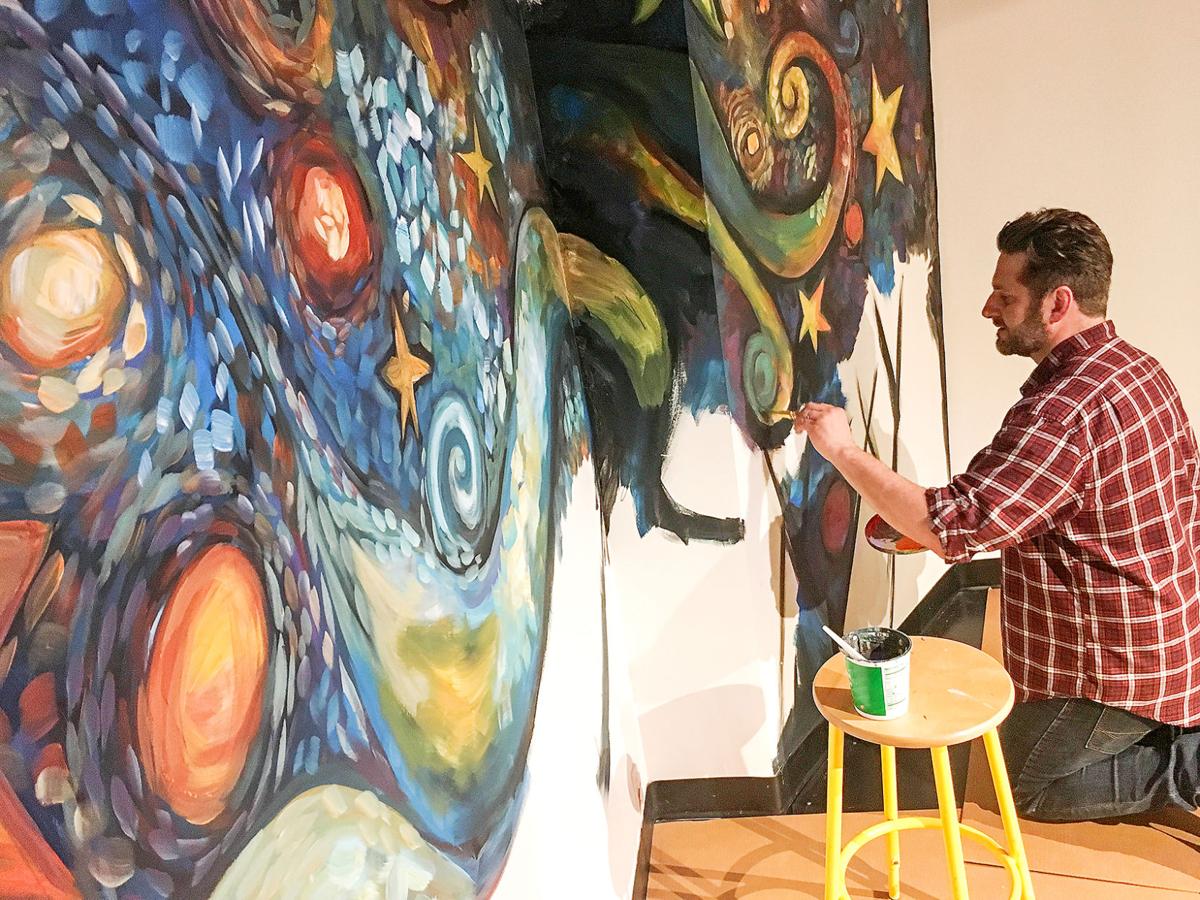 Jack of all trades, master of none.

Chad Elliott has no use for such an expression.

And he does it all quite well.

The 45-year-old from Lamoni, IA, is probably known as a musician first and foremost to folks in the Iowa Great Lakes where he performs regularly during the summer months.

But his path here actually started with a sculpture degree from his hometown’s Graceland University.

While he was studying ceramics, music began to weave its way more and more into his story.

His roommate was a jazz musician and always had a guitar in the room.

“I didn’t know how to play but I’d always been around music. My grandfather was a singer in church and theater and I had always wanted to sing, but never had a way to do it without an accompanist,” Chad said. “I thought this could be my way, so I started to teach myself guitar. Everything I know really has been learned by watching others.”

After college Chad headed out West.

It was in the wide open spaces and mountain valleys of Montana that he began his first foray into songwriting.

“It became this obsession,” Chad said. “I wanted to write originals but didn’t know how to do it. I didn’t have the confidence.”

At a point between jobs he decided to just go for it.

“I had just quit a job as a sign painter and I figured I got two weeks here, so can I write 20 songs, even bad songs, and that kind of got me over the hump of facing the fear or critic in my own head,” Chad said.

Some 2,000 songs and 20 years later, he’s been writing originals ever since.

After that stint in Montana, Chad moved to Spencer, working at Arts on Grand, as well as the Pearson Lakes Art Center teaching some clay classes as an artist in residence.

It was at Arts on Grand where he first performed his own songs in public.

“Somebody canceled, so I thought maybe I can fill up that time. It was two hours and I figured I had a bunch of bad songs so I might as well try them out,” Chad said.

That gig in 1997 was the bridge for bigger things to come.

“I realized that I could get paid to sing my own songs, tell my own stories,” Chad said.

His own story took him back to the mountains one more time, for a master’s degree program in ceramics at the University of Montana in Missoula.

But the pull of the music was too great.

He left the program and began pursuing music full-time, touring the country, continuing to write songs and find inspiration on the road.

“I find that traveling frees up my creativity and imagination when it comes to songs,” Chad said.

The places he sees and people he meets while making his way around the country from gig to gig turn into stories to tell on stage.

And in some cases it’s not a person or place, but a pelican.

“That song is from a pelican poster that haunted me. It hung over my bed after a show one night and I just had to write about it the next morning,” Chad said. “It wanted a song evidently!”

That song, “King Pelican,” and the album of the same name were released last fall and were recorded at Sun Studio in Memphis, as was Chad’s previous album, “Rest Heavy.”

Being influenced by folk singers, blues artists and digging deeper into soul, Chad felt the weight of those who’d come before him when they hit the studio for the first time.

“We knew we were going to Memphis — Sun Studio — the roots of soul, rock ‘n’ roll, blues. We better represent,” Chad said. “A lot of those were strong, older songs that when we played them the first time with the band they just hit. It had a magical chemistry to it.”

When Chad takes his music from the studio to the stage it brings about another layer of creativity that he enjoys as much as all the rest.

“The live setting — that’s partly why I left grad school — the live energy of that,” Chad said. “It’s always hit or miss and I like that part too. It never becomes completely rote. You’re creating a piece of artwork that is going to go away that night. I love that.”

He enjoys experimenting with his songs as well.

They may sound completely different at shows weeks apart.

“You’re creating a work of art for the audience. Sometimes I’ll change a song completely one night and if you’re not there you won’t hear it,” Chad said. “Sharing new songs is always fun, too. They may not sound the same a month from now, but this is how they sound now.”

Chad performs some shows solo, some with a trio including a drummer and trumpet player, and others yet with a full six-piece band including guitar, bass guitar and piano.

As he navigated his music career, other artistic pursuits would take turns riding shotgun, while others were stuck in the way back seat.

“It stymied me for a long time,” Chad said. “I believed in the idea that you pick one thing and you work really hard on that thing and you’ll be successful.”

For years he found himself unable to paint, simply because he was busy writing songs. He figured that would be the one thing he’d do and do well.

As far as finding time to put that ceramics background to use, it was also put on the back burner.

“I’ve got the kiln. I’ve got the wheels. A few years ago I had a studio where I was creating sculptures, but it was just hard to do with the touring,” Chad said. “That’s what I say I’ll do when anyone asks what I’m going to do when I get older.”

Lately though he’s broken himself free from the thought that he can only pursue one creative outlet at a time.

There are plans to work with a bronze foundry and possibly stop motion sculpture projects.

“If an idea catches fire and I have time to do it, I’m not afraid to work, but there’s only so many hours,” Chad said with a laugh. “There’s the saying ‘jack of all trades, master of none’ but why not try to master all of it?”

He believes that’s important for people young and old to hear.

So instead of paring down his artistic pursuits, he continues to add to them.

Becoming a published poet was one item he didn’t anticipate. That started as a break from songwriting by sharing poems on Instagram alongside photos of his travels.

He also began picking up his paintbrushes again, with a large starry sky mural completed at the Pearson Lakes Art Center last summer, just one of many examples of recent work.

“I tell kids at school visits about how I put painting on the back burner for a while. I let it steep a little while touring and driving and trying to make a living as a songwriter, but I always thought I would do it again,” Chad said.

Through his children’s book project, “Wilderman’s Treetop Tales,” Chad wove together several of his artistic passions.

Painting, poetry and songwriting all take a turn.

Shel Silverstein was a major source of inspiration for Chad growing up.

“A lot of people don’t know that ‘Where the Sidewalk Ends’ also had an album. A lot of it is just him reading, but some of them are songs,” Chad said. “I think I was a teenager when I first heard the music that came with the books I loved. I found out later he was a songwriter, painter, illustrator.”

Silverstein in fact wrote at least a couple hit songs like “The Cover of Rolling Stone” and “A Boy Named Sue,” which was made popular by none other than Johnny Cash.

Illustrations are inspired by songs or poems that he wrote for his own children.

“Some are songs, others are silly, goofy poems. The first one I wrote to my oldest son when he was four years old just to make him laugh,” Chad said.

A second installment is already well on its way, with just a few paintings left before “Wilderman’s River Rhymes” joins Chad’s canon of work.

Whether they’re at one of his concerts, reading a Wilderman book to their own children, or gazing at one of his whimsical paintings, Chad hopes his audience enjoys the imaginative worlds he creates and finds a way to connect to their own stories.

“When it comes to writing or painting or poetry or songwriting, I love that you can create your own reality and live in that. That’s always been a fascination for me since I was a kid,” Chad said. “I never knew it would be my job and that’s been a really cool blessing.”

He also counts his blessings at home, where his kids help stoke the creative fires, and his wife Alyssa, handles all the bookings and business dealings while keeping Chad on schedule.

“I sometimes wonder how it all landed where it landed. I’m touring, playing my own songs and I’m also there dropping off my kids on the first day of school. I think artists need to hear that that’s a possibility. It’s all in my Google calendar!” Chad said. “It’s a dream come true and it keeps getting sweeter and sweeter.”

“I was supposed to be recording an album this month [April] in Alabama,” Chad said.

Specifically he was supposed to be recording at Fame Studios in Muscle Shoals, home of such hits as “When a Man Loves a Woman,” “Mustang Sally,” and many more.

“Two weeks into the quarantine I was supposed to be recording with a lot of the original players from those songs that are in their 70s now,” Chad said.

With the recording session shelved for the time being and most of his May shows and several June concerts canceled, Chad pivoted to painting as a way to concentrate his artistic energy during the coronavirus pandemic.

He had planned on taking some time off in the fall to focus on painting, so that schedule got moved up several months instead.

“I’ve been trying to keep it interesting,” Chad said. “My way of connecting is late nights. I can spend hours chatting with people while I’m playing. I do one called the Night Owl Session where I just play for people for four hours, seeing their comments and requests. I also do something called the Dark Town Series where I go to empty small towns when nobody is out in the middle of the night, record Main Street while playing songs behind the camera.”

Keeping things interesting and creative during these times has afforded Chad a new set of tools that he hopes to continue to apply after he can get back to his regular gigs.

Students from the Sheldon United Methodist Church came together to help out their community Thursday.