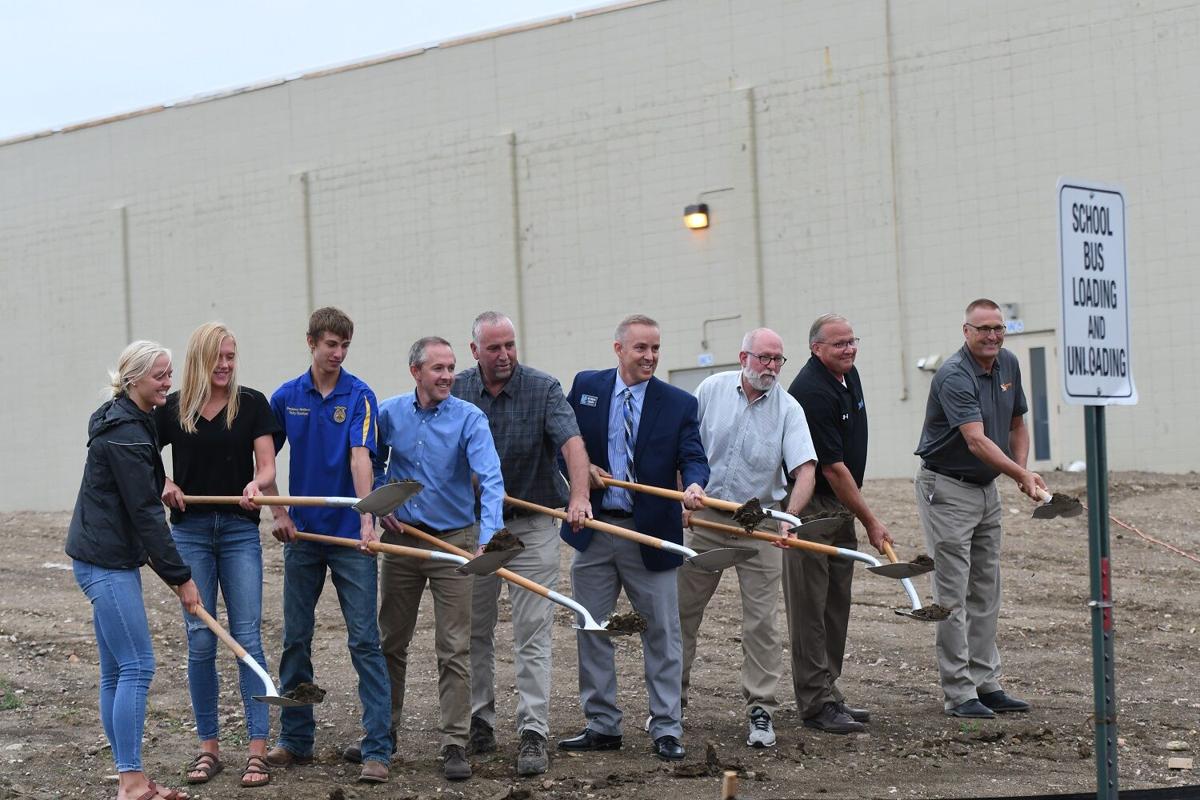 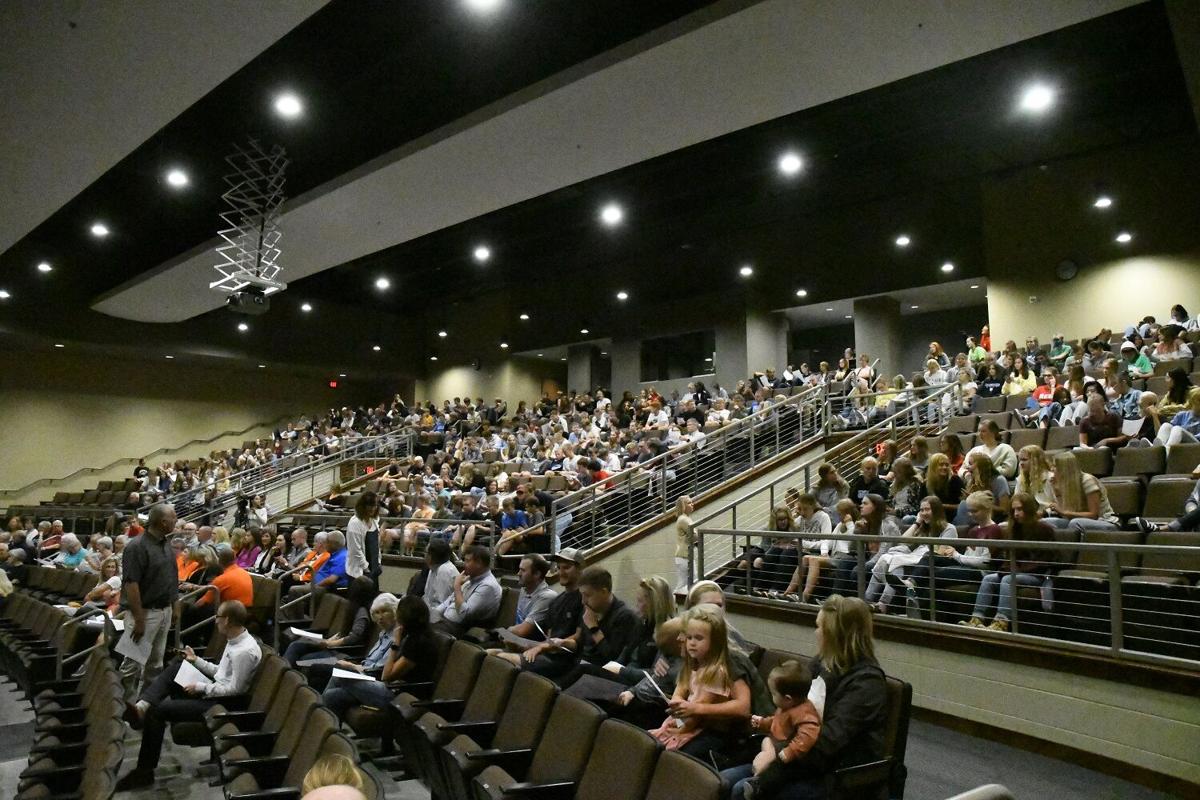 A crowd of about 400, including students, parents and community members, attended the groundbreaking program held Thursday, Sept. 2, at Unity Christian High School in Orange City. The informational portion of the event was held in the school’s Knight Center auditorium. 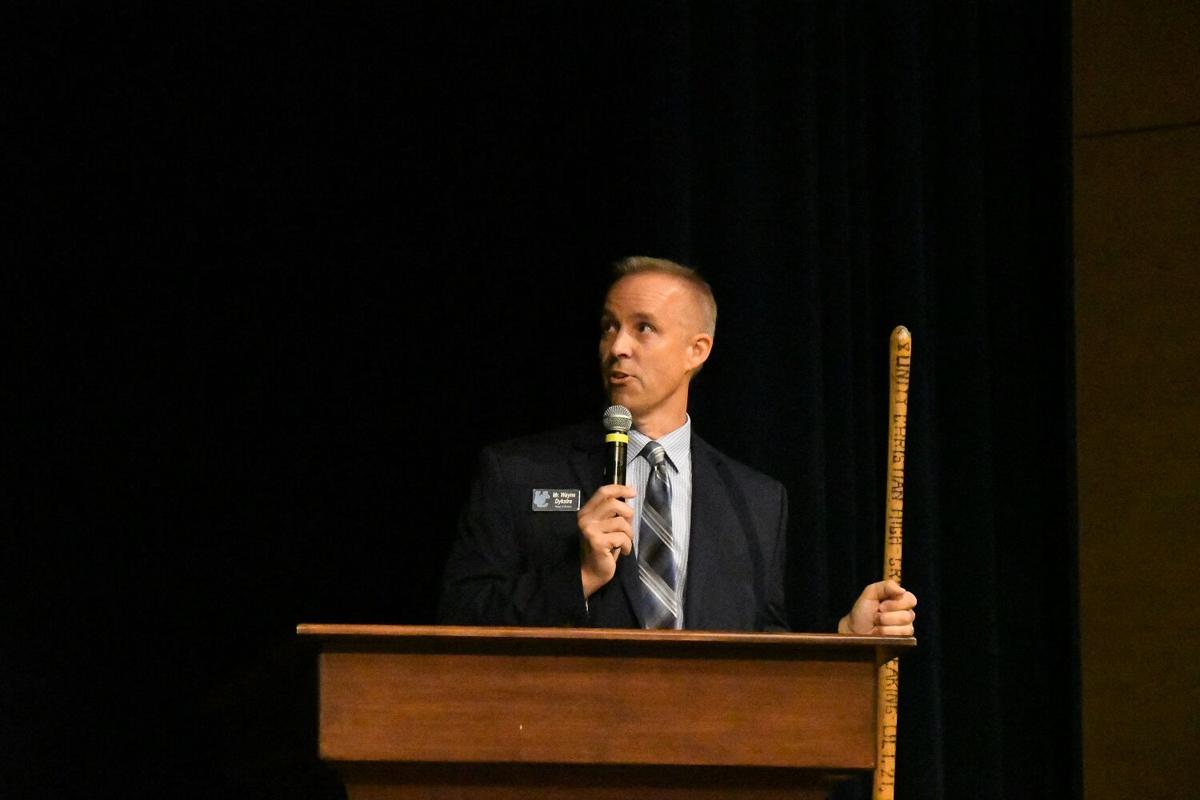 Unity Christian High School principal Wayne Dykstra holds up one of the ceremonial shovels that was used in the groundbreaking ceremony Thursday, Sept. 2, to kick off the construction work of the school’s new 38,500-square-foot addition. 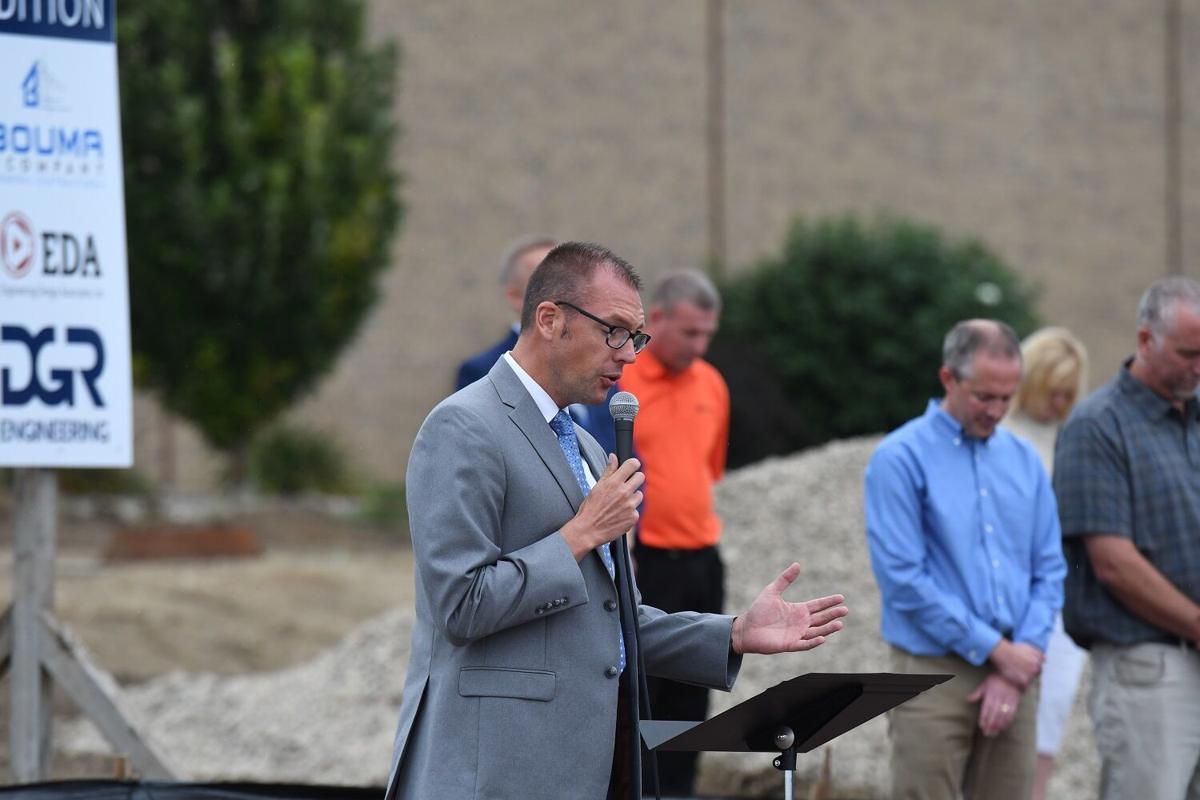 ORANGE CITY—If Wayne Dykstra had a DeLorean-style time machine, he would use it to travel back to the early 1960s to tell Unity Christian High School’s founders how the school in Orange City will flourish throughout the next six decades.

The most recent development the principal would describe to them would be the 38,500-square-foot addition that will consist of a new gymnasium, fitness area, and science and agriculture wing. The project also will include a new transportation building.

“When you put that shovel in the ground, you had no idea what was going to happen,” Dykstra said during an assembly of about 400 people in Unity Christian’s Knight Center Thursday, Sept. 2, before the groundbreaking ceremony for the expansion project.

Behind Dykstra on the auditorium’s projector was a photo of the school’s founders digging into the site that would eventually become Unity Christian.

The Unity Society — which consists of alumni, parents of students and financial supporters of the school — gave its OK for the project in November 2019 with 321 of 329 ballots in favor of it.

Since that time, the school has raised $5.18 million in cash/pledge donations for the estimated $8 million endeavor. Dykstra said $5 million had been the amount the school sought to raise before breaking ground.

Dykstra said if he could travel back in time like Marty McFly from the movie “Back to the Future,” he also would tell Unity Christian’s founders about other expansion developments throughout the school’s history. Those would include the construction of its existing gymnasium in 1974; an updated science wing in 1985; the addition of the senior hallway and computer labs in 1994; and the opening of the Knight Center in 2013.

“If you could just go back and show them, ‘Look what has happened: Fifty-eight years later, 55 classes have graduated from Unity, 3,843 graduates of Unity Christian High School serving the Lord all over the world,’” Dykstra said.

Andy Landman, chair of the school’s building committee, also took the microphone during the assembly to give a rundown of the features included in the school expansion.

The new gymnasium will have enough space to house two full-size high school basketball courts that will run east-west and one college-size court that will go north-south. It will be used mainly as a space to give Unity Christian’s athletic teams more room to practice simultaneously instead of having to share one, smaller gym.

The new gym occasionally will hold small tournament games and will therefore have bleachers that can accommodate 450-500 spectators.

Next to the practice gym will be two new locker areas for boys and girls, which will feature individual shower stalls.

The new fitness area will be located on the ground floor next to the practice gym as opposed to the existing fitness center which is on the second floor. That will make it more accessible for people unable to ascend stairs.

Another feature that will be in the new fitness room is an artificial turf area where students can perform exercise movements and drills.

Landman also spoke of the five-room science and agriculture wing, which will include two classrooms with three lab spaces in between. One of the lab areas will double as a space for the school’s ag department to do lab work of its own when needed. Otherwise, it will be used as an overflow space for science classes.

“Initially, we planned for two labs. We managed to get a third lab, and we think that’s a great thing,” Landman said. “These are really big labs. They’re probably about 45 feet north and south by about 30 feet in the other direction.”

Unity Christian graduate Dave Goslinga will be the general contractor for the project, and his company, Bouma & Company Construction, will complete the work.

Dykstra noted the overall cost of the work has been in flux due to turbulent prices for construction materials because of the coronavirus pandemic.

“The project costs in the last six months have obviously been out of our control. Our board and our school constituents still felt it was go time, even if the project is going to be a moving number,” Dykstra said.

He was hopeful the new addition would be ready to go halfway through the 2022-23 academic year but noted the possibility of delivery delays with building equipment.

“We would love to be cutting a ribbon in early 2023,” Dykstra said.

SPECIAL NOTE: Nwestiowa.com will be featuring articles and photographs by students in Meghan Vermeer’s journalism class at Unity Christian Hig…