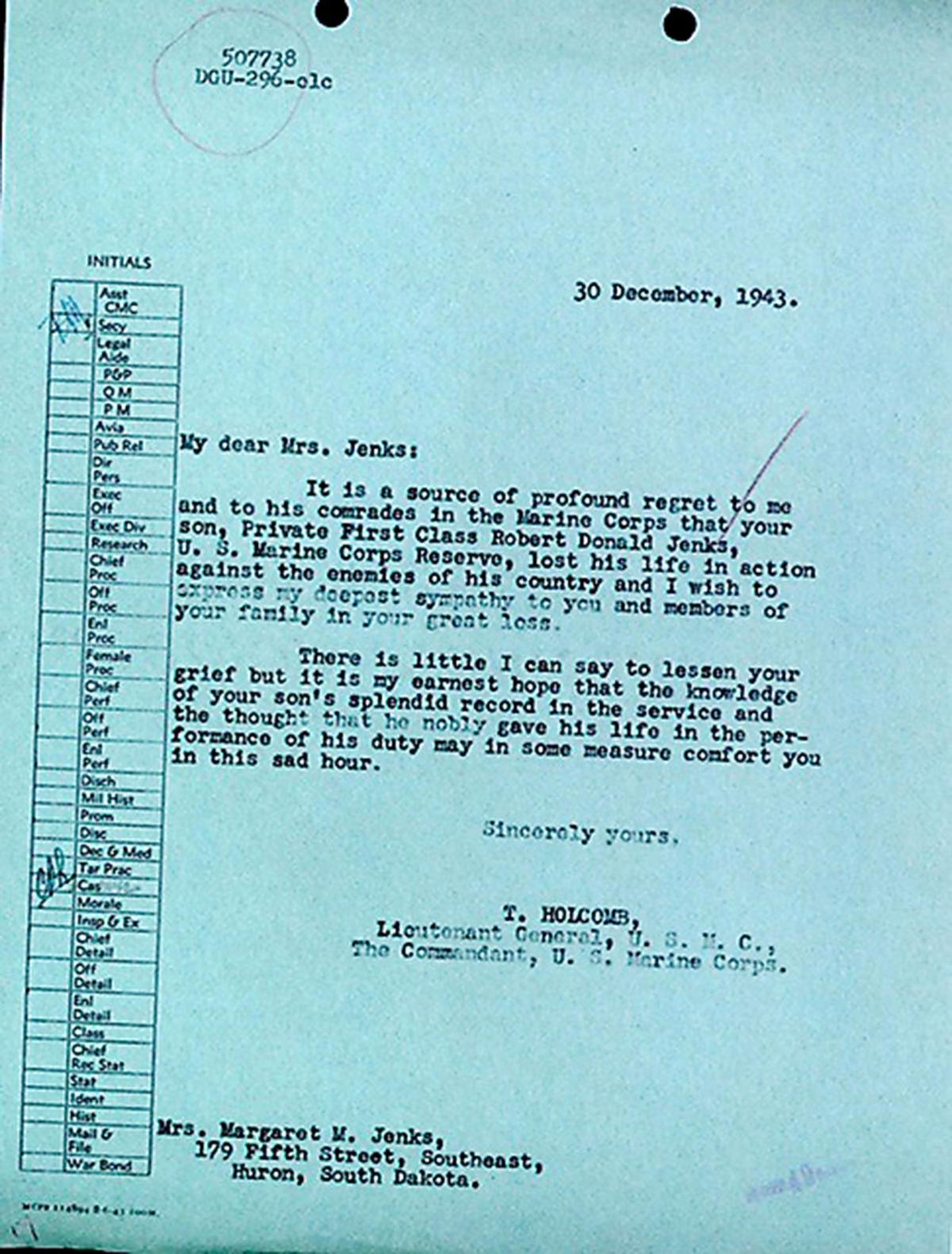 Margaret Jenks, mother of Robert Jenks, who was born in Sutherland, received this letter from the U.S. Marine Corps informing her of her son’s death. She later received another stating his remains could not be found. 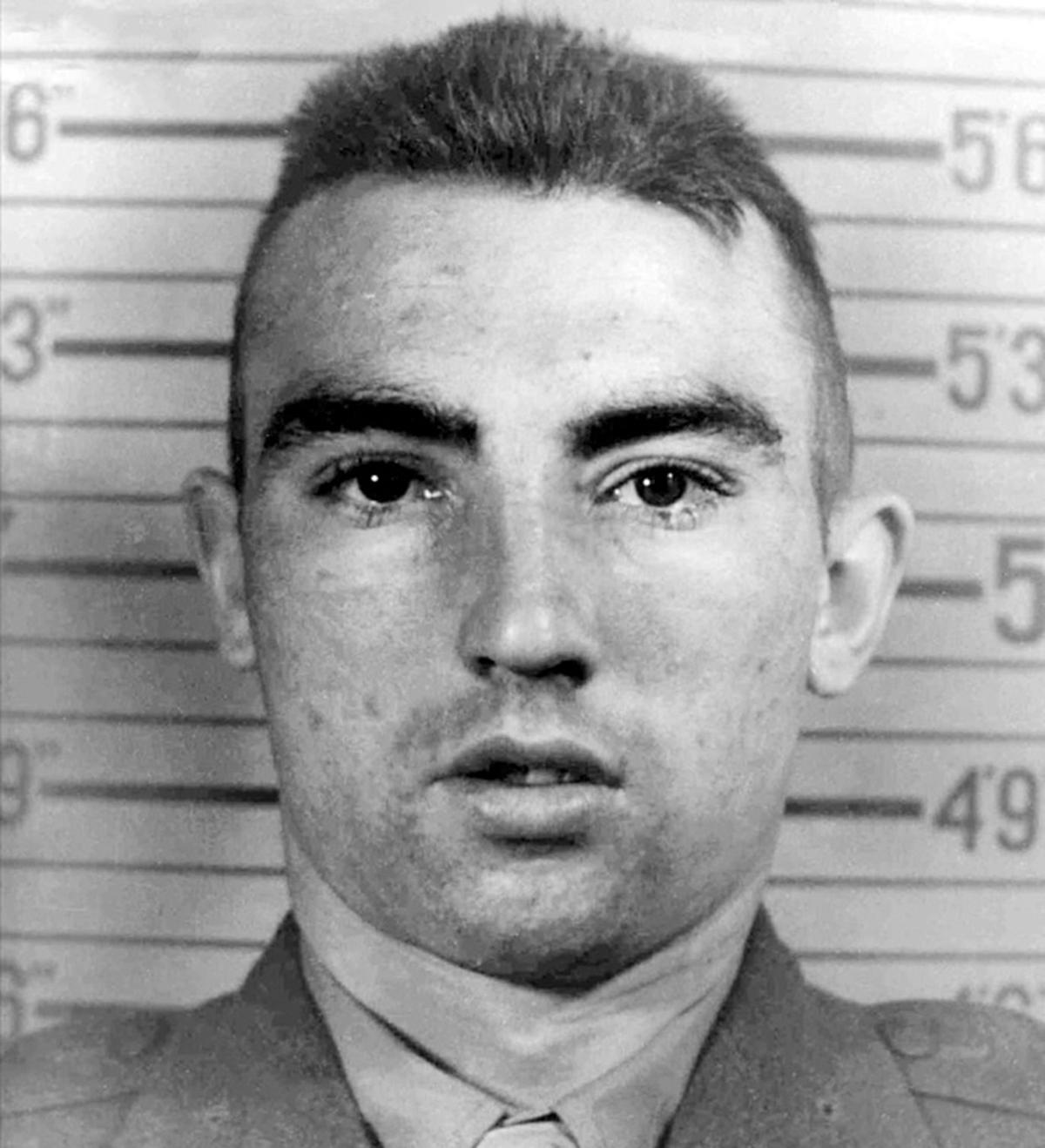 SUTHERLAND—The remains of a man with Sutherland ties who was killed in military action nearly 77 years ago have been identified.

“We’ve been hoping for this,” said 60-year-old Robert “Bob” Jenks of Portland, OR, who was named after his late uncle. “We’re glad that this story’s over and his remains are going to be returned.”

He was one of many Marines who landed in November 1943 against stiff Japanese resistance on the small Pacific Ocean island of Betio in an attempt to secure the site.

Betio is located in the Tarawa Atoll of the Gilbert Islands, now a part of the country known as Kiribati, which is situated about 2,400 miles southwest of Hawaii.

Over several days of intense fighting during the Battle of Tarawa, approximately 1,000 Marines and sailors were killed and more than 2,000 were wounded, while the Japanese were virtually annihilated.

Robert died on either the third or fourth day of the battle, which occurred Nov. 20-23, 1943. He was reported to have been buried in Row D of the East Division Cemetery, later renamed Cemetery 33.

He and the other Marines and sailors who gave the ultimate sacrifice during the battle helped establish the successful American occupation of Tarawa, which gave the United States strategic air and land bases for continued war operations across the Pacific Ocean.

Later during the war, naval construction battalions reorganized the cemeteries on Betio, complicating disinterment efforts after the end of the conflict.

Robert and many other Marines buried in Cemetery 33 could not be located or identified after the war.

Remains were recovered from the trench and turned over to the Defense POW/MIA Accounting Agency.

Scientists used circumstantial evidence and laboratory analyses to identify Robert from among the remains found in the trench.

Bob noted the U.S. Department of Defense hired a genealogist to find a living descendant of Robert’s.

“It was five years ago that the Marines tracked me down as a living relative to get a DNA sample,” Bob said. “That’s when I realized that they were recovering remains and that they were looking in an area where they thought his body might be.”

That led Bob to research what had happened to Robert during the Battle of Tarawa and to follow the process of recovering and identifying the remains found on Betio.

According to the Missing Marines website, missingmarines.com, Robert was born in Sutherland on Dec. 15, 1922, to Arthur and Margaret (Frank) Jenks, an O’Brien County farming couple.

The Jenks family expanded to include five boys — Arthur, Joseph, Robert, James and John — before they moved northwest from Iowa to Huron, SD, during the early 1930s.

“The elder Jenks boys went to school through about the eighth grade, then went to work — helping around the farm, or with the Civilian Conservation Corps,” according to Missing Marines. “Robert managed to get a job working for a real estate firm in Huron.”

Two more children — Robert’s sister Frances and brother Thomas, who was Bob’s father — were born in the years after the Jenks family relocated.

“The younger siblings — who were the ones that I was the most in contact with — really loved him,” Bob said of Robert.

“They looked up to him,” he said. “I wasn’t the only one of my generation that was named after him. I know he was well-liked within his family.”

Like many of his brothers, Robert entered the U.S. military, joining the Marine Corps Reserve in December 1942. He traveled west to San Diego for boot camp.

Robert trained with Company D through the summer of 1943, learning to work with the crew of a heavy 81-millimeter mortar. That fall, he was promoted to private first class.

In October 1943, Robert sailed from New Zealand for his first — and only — combat operation.

“After spending a month at sea aboard the USS Feland, he landed on the tiny island of Betio in a tiny rubber boat, and spent his first night in the combat zone on the recently secured Green Beach,” ac­­cording to Missing Marines.

The following day — Nov. 22, 1943 — “his battalion attacked along the southern shore of Betio, rolling up the flanks of Japanese fortifications that were slaughtering other men of the 2nd Marine Division,” according to Missing Marines.

Evening halted their progress, and Robert helped his fellow military members dig foxholes in preparation for a nighttime counterattack.

“When a gap in the lines was discovered, Jenks’ platoon leader Captain Lyle ‘Spook’ Specht ordered his gunners to leave their heavy mortars and plug the gap using only their personal weapons — mostly small carbines and 60-mm mortars, firing at point-blank range,” according to Missing Marines.

“This platoon bore the brunt of a major banzai attack, which one D Company veteran estimated at ‘300 against maybe 45 or 50 men.’”

Robert likely lost his life during this fight. On the morning of Nov. 23, 1943, “he was found dead in the field with shrapnel wounds in his head and chest,” according to Missing Marines.

He was buried in a long trench alongside about 30 other Marines later that day. The temporary markers put up for the fallen did not last long.

“Construction of a Navy base ultimately destroyed the scrap wood crosses, and the location of the grave was lost,” according to Missing Marines.

The first letter — dated Dec. 30, 1943 — informed the Jenks family that Robert had been killed in action, while the second one — dated Feb. 20, 1947 — told his relatives the military could not find his remains.

“I had heard when I was growing up that was just sort of devastating for her,” Bob said. “She felt like he was killed a second time.

“It took time to get over the grief of the first one and then finding that his body was missing and wouldn’t be returned really just restarted that whole grieving process,” he said.

Bob noted the Marine Corps promised in the second letter to keep searching for Robert’s remains, which went undiscovered in that burial trench near Cemetery 33 on Betio until 2019.

That is when the History Flight expedition found the burial trench and brought recovered remains — including Robert’s — back to the United States for laboratory analyses and identification.

“The body that they recovered last year was the full remains,” Bob said. “They were able to do it through dental records, which they do long before they get to DNA.”

Robert is memorialized on the Courts of the Missing at the National Memorial Cemetery of the Pacific in Honolulu.

He received the Purple Heart, which is awarded to members of the U.S. armed forces who are wounded by an instrument of war in the hands of the enemy and posthumously to the next of kin in the name of those who are killed in action or die of wounds received in action.

“The default for the DOD is an Arlington funeral,” Bob said. “The family has a choice whether to do that or request something different.”

“Arlington makes a whole lot of sense,” Bob said. “That’s where most of his fellow Marines are buried from the battle.”

He expressed his gratitude to the Marine Corps, the Defense POW/MIA Accounting Agency and History Flight for the recovery and return of Robert’s remains from Betio to the United States.

“People promised my grandmother more than 70 years ago that they would keep looking,” Bob said. “There have been people who have continued to look and continued to recover bodies as late as last year.

“To me, that’s pretty amazing that that’s happening,” he said. “I do give them a lot of credit and I do feel that there’s really an effort being made by a substantial number of people to not give up on the folks that were lost on that island.”

SUTHERLAND—Karter Rohrbaugh was honored he could be the match for someone who needed him to be.