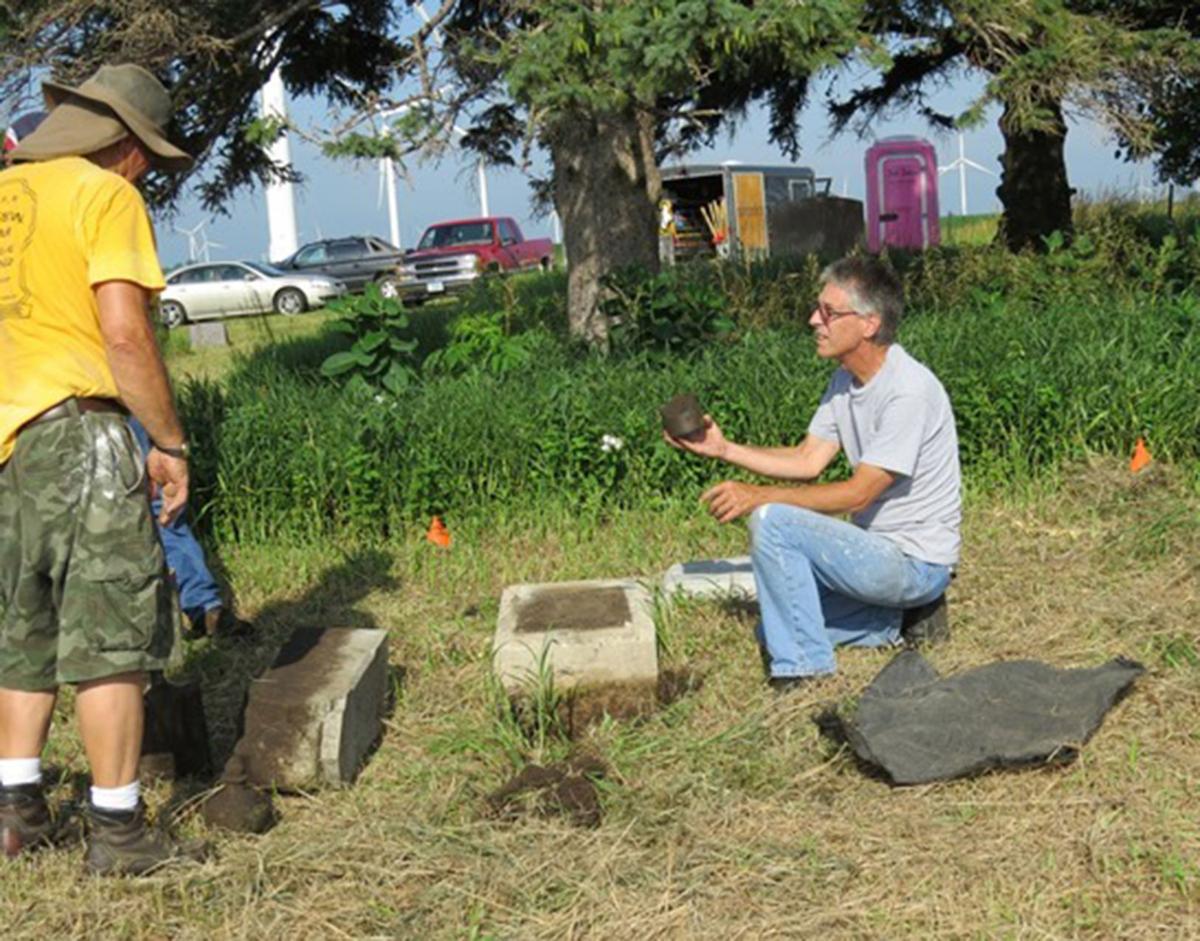 O’Brien County Cemetery Preservation Association member Doug Negus holds up a piece of gravestone at Steuck Family Cemetery near Primghar the past summer. 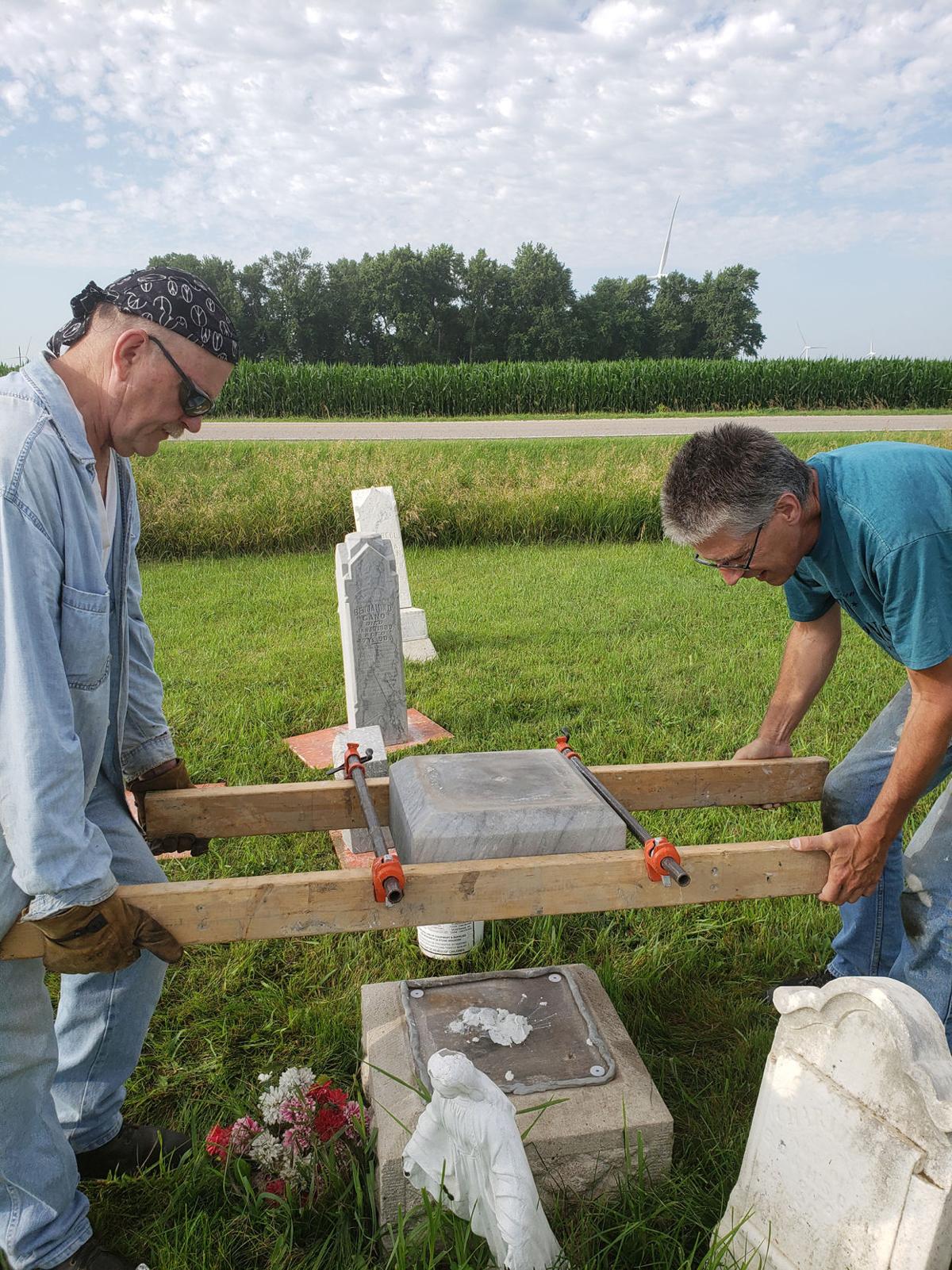 O’Brien County Cemetery Preservation Association member Doug Negus holds up a piece of gravestone at Steuck Family Cemetery near Primghar the past summer.

REGIONAL—There is an organization based in Sutherland that takes grave matters seriously.

Members of the O’Brien County Cemetery Preservation Association are ready to continue volunteering their time and working on restoring cemeteries — primarily pioneer ones — throughout the county as soon as spring weather arrives again.

The group restores, preserves and maintains the cemeteries and the gravestones in each one by cleaning up intact stones, putting together and re-erecting broken stones, and erecting new stones in instances in which the exact burial locations are known, but there are no existing markers.

Donna Youde of Sutherland, a member of the independent nonprofit organization, has been conducting extensive historical research on each pioneer cemetery in the county and the people who are buried in each one of the graveyards.

“She’s done thousands of hours of work, looking up every single person that was buried there, looking their family up, their kids, their parents,” said Doug Negus of Sutherland, the association’s president. “She’s put it into a book.”

The group is trying to find out more information on an Erie Cemetery that once existed south of Calumet.

“If anybody has information on it, we’d love to find out about it,” Negus said, noting there once was a town called Erie in the county.

He and Youde previously visited the county courthouse in Primghar and scoured records to see where people were buried.

“There were several of them listed as being buried in Erie Cemetery,” Negus said. “We don’t know where the cemetery was.”

The organization’s plans this year for graveyard labor include:

“The stones need to be repaired,” Negus said of Immanuel Lutheran.

“Last year, we got Steuck and Randolph all completed,” Negus said. “All the stones were reset, straightened, fixed.”

John Heider, president of the State Association for the Preservation of Iowa Cemeteries, visited the county for four days in July to teach gravestone preservation and restoration to Negus and other members of the local organization.

“He fixed them and showed us what to do and what to use — what materials that you use,” Negus said. “It was excellent. He got two cemeteries done for us. That was great.”

Hibbing has been hired by Negus’ association to work on repairing gravestones at Immanuel Lutheran this year.

“It’s a lot of manual labor — raising those stones and leveling them,” Negus said.

Negus noted the group also hired Kenny and Julie Sandvig, who own and operate Southside Monuments in Spencer.

“They’re the ones that are finishing up Covey for us,” Negus said. “They’re fixing and straightening stones.”

Ben Eldridge of Paullina previously performed some of that same kind of work at Covey for the association.

Like the group has had done for Covey, it wants to have directory and location signs put up for Immanuel Lutheran, Randolph and Steuck this year.

The directory signs for each cemetery will include the names, dates of birth and death, and location of the people buried in each graveyard.

The location signs will mark the site of each cemetery at each respective entrance as well as along the nearest paved road to each graveyard.

The association began during the fall of 2017 with its main mission being to locate, record, restore and maintain all of the pioneer cemeteries in O’Brien County.

According to Iowa Code Section 331.325, a pioneer cemetery is defined “as a cemetery where there have been 12 or fewer burials in the preceding 50 years.”

The group started working in 2018 on improving Covey’s gravestones and then moved on to other pioneer cemeteries after that.

“When John came, he showed us how to use a tripod with chains and all that to get them raised and straightened,” he said. “That sure made it a lot easier.”

This story originally was published in the Feb. 1, 2020, edition of The South O'Brien Sun.

The O’Brien County Cemetery Preservation Association has $13,400 to use toward the work that will be done this year at various pioneer cemeteries throughout the county.

The organization plans to apply for grants from the O’Brien County Community Foundation and the State Association for the Preservation of Iowa Cemeteries.

The O’Brien County Board of Supervisors has allocated $4,500 for the association in the county’s fiscal year 2020-21 budget.

The organization, which is working on setting up a website, always welcomes donations as well.

The association’s January meeting has been rescheduled for 5 p.m. Tuesday, Feb. 4, at the Gen. N.B. Baker Library in Sutherland, during which the organization’s officers will be elected for the next year.

PRIMGHAR—The O’Brien County Cemetery Preservation Association is looking for increased funding from the board of supervisors.