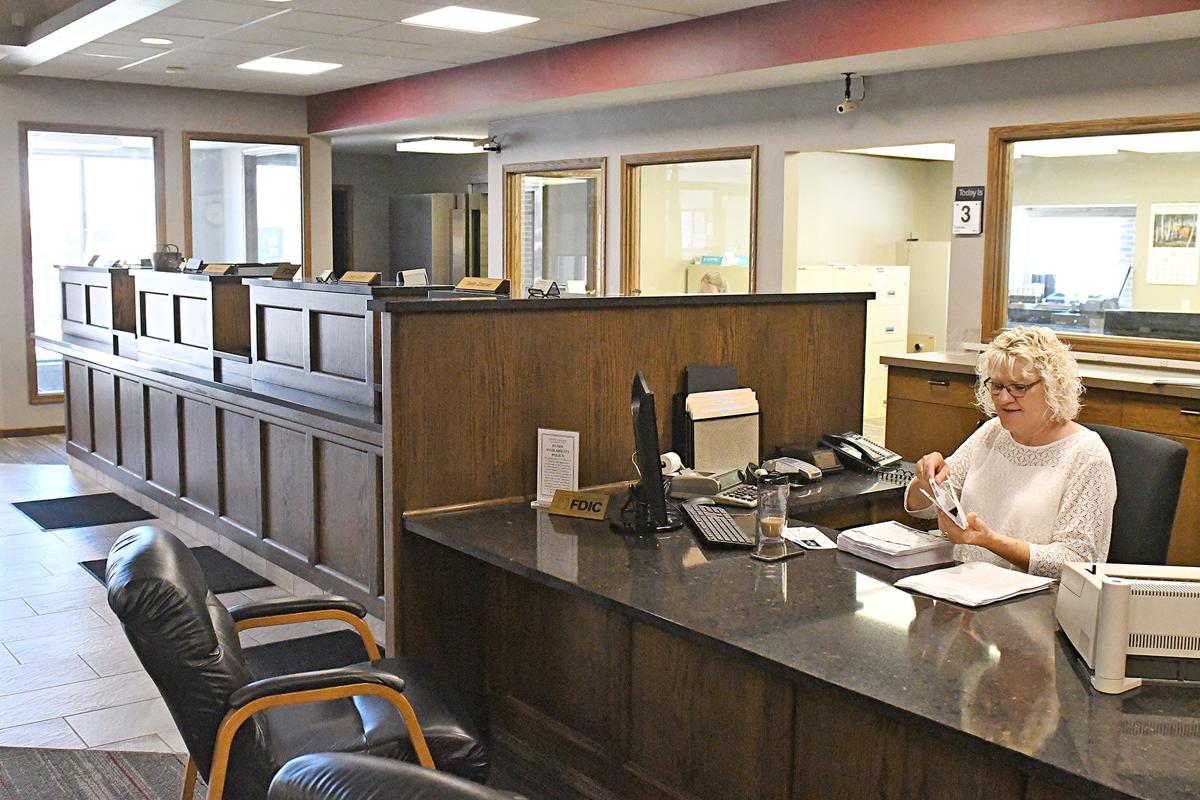 Security State Bank teller Kay Farquhar works in the renovated lobby of the financial institution’s Sutherland branch. The inside of the bank — including the lobby area and offices — recently underwent a major renovation. 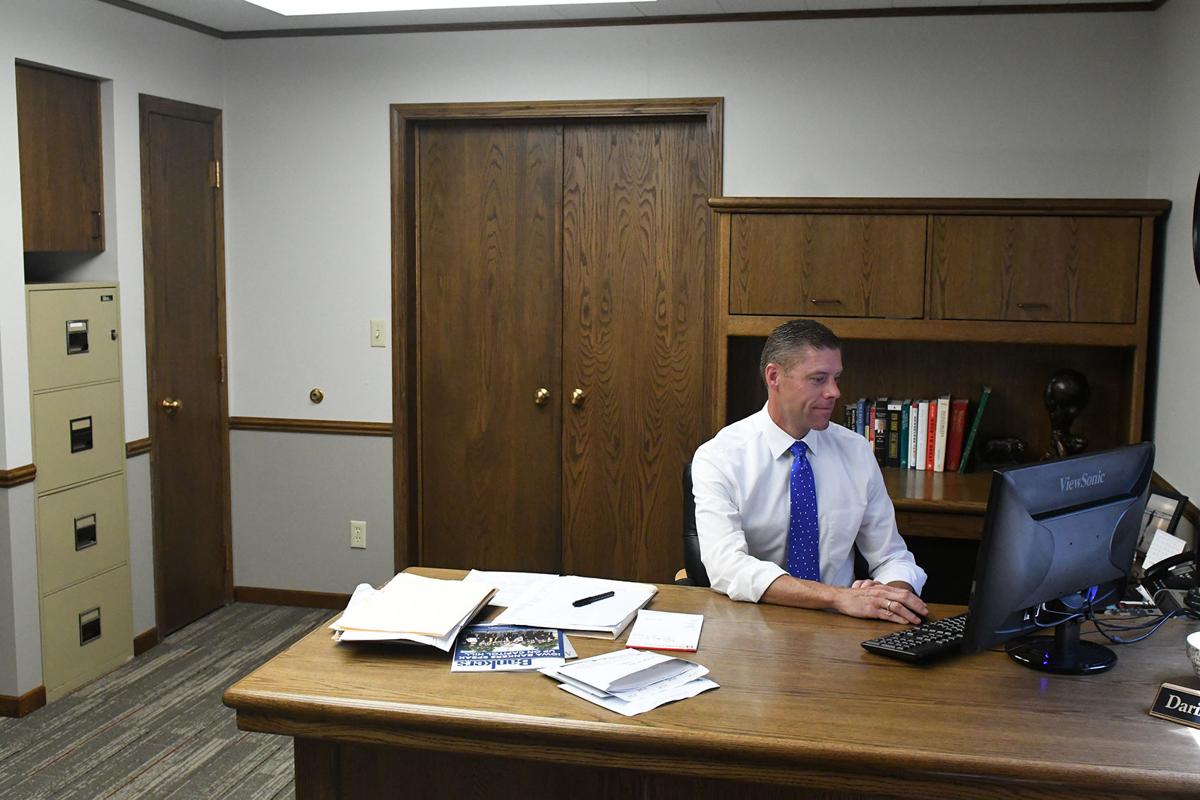 Security State Bank CEO and president Darin Johnson works in his office at the financial institution’s Sutherland branch. The inside of Security State underwent a major renovation project earlier this year.

Security State Bank teller Kay Farquhar works in the renovated lobby of the financial institution’s Sutherland branch. The inside of the bank — including the lobby area and offices — recently underwent a major renovation.

Security State Bank CEO and president Darin Johnson works in his office at the financial institution’s Sutherland branch. The inside of Security State underwent a major renovation project earlier this year.

SUTHERLAND—People can bank on seeing a renovated interior at the only financial institution in Sutherland.

The inside of Security State Bank — including the downtown branch’s lobby area and offices — underwent a major renovation project earlier this year.

Bank CEO and president Darin Johnson said the financial institution worked with TurnKey Associates LC, an architecture/commercial construction firm based in Waterloo, on the project.

“I wasn’t quite ready to go that far with our pretty traditional clientele here, so we kept the existing footprint with the teller line and the existing cabinetry,” he said.

The refurbishing project included a lot of work on the financial institution’s ceiling.

“We did do a fairly extensive re­­model to the ceiling structure,” Johns­on said. “Originally, we had this really heavy popcorn texture that just screamed early ’90s, along with the mauve color scheme, so that all had to go. We lifted the ceilings up as far as we could.”

Johnson described the financial institution’s interior color scheme previously compared to what it looks like now.

“It was a lot more tan, and the carpet was kind of a greenish-yellowish tan,” he said. “Now it’s more in that gray family — the grays and the whites, with that accent of red, which is kind of our signature color. We have that in our logo, in our letterhead, that type of stuff.”

He explained his favorite result of the bank’s remodeling project in the lobby area.

“What I feel is the signature piece is the reclaimed barn wood wall on the back,” Johnson said. “We talked about a couple of different alternatives and we settled on this reclaimed barn wood, which is really kind of a cool product.

“When the contractors installed it, it’s kind like a brick mason or a stonemason,” he said. “They lay it all out because it all comes in random colors and lengths and patterns and widths. It takes an artistic eye to install that, so it doesn’t look like it’s a pattern. It’s supposed to be random.”

Adam Hibbing’s H&H Homes and Concrete of rural Paullina was the main contractor on the renovation project.

“This architecture firm acted as the general contractor, but for the most part, Adam and his crew did probably 90 percent of the actual construction work,” Johnson said.

The financial institution wanted to use only local contractors for the project — outside of TurnKey — for as much of the work as possible.

“They originally wanted to bring in their construction firm out of Waterloo and they said they would get it all said and done in a month, but I said absolutely not,” Johnson said. “That’s just not our philosophy. We might as well support those that support us.”

“I told Travis that I didn’t care where the materials came from, but he was going to do the installation because he was my guy and I trusted that he would do a good job as far as workmanship, and he did,” Johnson said.

Hicks Electric of Calumet handled all of the electrical work and labor on heating, ventilation and air conditioning for the financial institution’s refurbishing project.

Many of the materials and supplies for the overall work came from Sweeney’s Farm & Home Center in Sutherland.

“As much as we could, we did locally, especially with our own customers,” Johnson said.

Work on the bank’s renovation project began in February and ended in July.

“It probably ran over a couple months, but that’s to be expected,” Johnson said. “We did run into a few weather delays, even though it was an interior project. With the snows in there, some of our guys that were coming from out of town — either the materials couldn’t get here or they couldn’t get here a few of those March and April weekends.”

He described another challenge the financial institution faced during the remodeling project.

“We had to stay open this entire time,” Johnson said. “Unlike a home, where you can either move out for six months or live in a different part of the home, we had to live and work amongst all this demolition.

“I give my staff all the credit in the world because we had jackhammers going and guys buzzing around here,” he said. “It was a very dirty work environment.”

He has heard positive comments from both the bank’s staff members and customers about the renovation project, but there will be no event scheduled specifically to show off the changes to the branch’s interior.

“We enjoy having our customers come into the lobby,” Johnson said. “We have an annual open house in the Christmas season. They can come in and see it then if they haven’t already.”

Founded in 1931, Security State Bank has been a locally owned and locally involved part of the communities it has served for generations.

The financial institution, which has branches in Paullina and Sutherland, saw its original Sutherland location burn down by a fire in 1990.

The bank had a new building constructed in 1991 at 109 W. Second St. in downtown Sutherland, which is an O’Brien County community of about 600.

“This is the original structure, as far as that part goes, since reconstruction in ’91,” said bank CEO and president Darin Johnson. “We basically hadn’t done a lot of major remodeling since that time — just a little bit of paint and carpeting, that type of thing.

For more information on Security State Bank, call the Paullina branch at 712-949-3932 or the Sutherland location at 712-446-3324, or visit the bank’s website at mysecuritystate.com.

SUTHERLAND—An online presence may not be in existence for The Menagerie in Sutherland, but the impact of the small-town business remains significant.