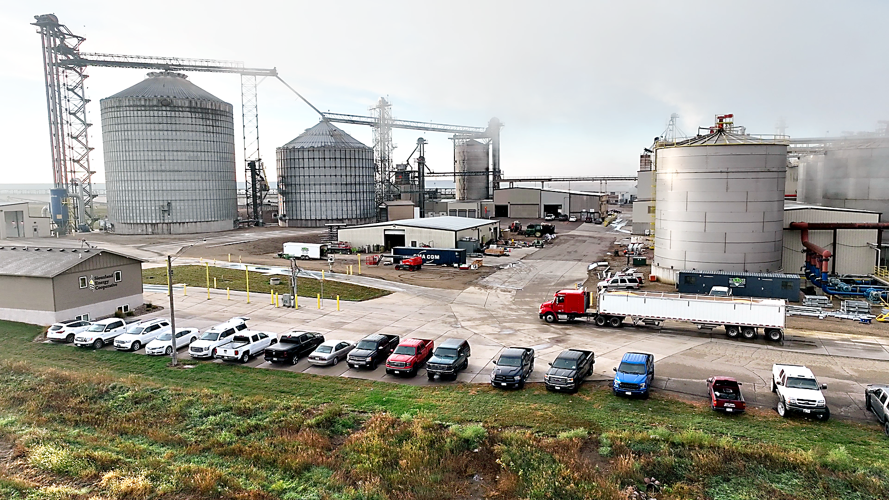 Siouxland Energy Cooperative west of Sioux Center is one of the 32 ethanol plants partnered with the Summit Carbon Solutions pipeline. The $5 billion project would capture the CO2 emitted in the production process and pipe it underground to be stored in North Dakota. Summit is targeting August to begin construction. 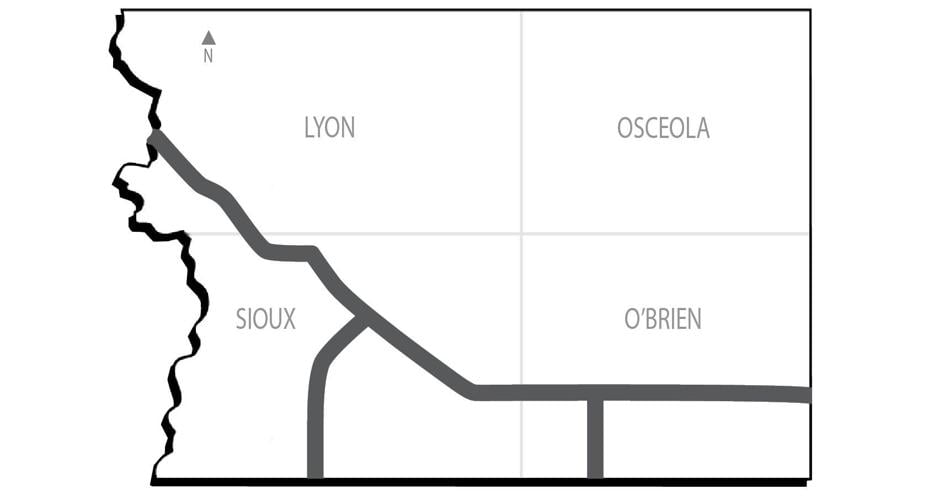 The proposed route for the Midwest Carbon Express would cut through farmland in Lyon, Sioux and O’Brien counties, transporting carbon dioxide up to North Dakota. 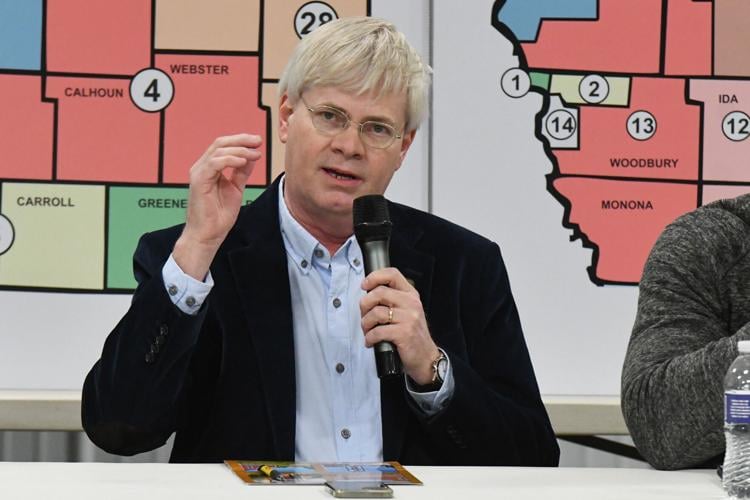 State Sen. Jeff Taylor (R-Sioux Center) speaks about his opposition to eminent domain for proposed carbon dioxide pipelines in Iowa. He introduced a bill on that stance in 2022. The bill failed but Taylor is pushing legislation again in 2023. 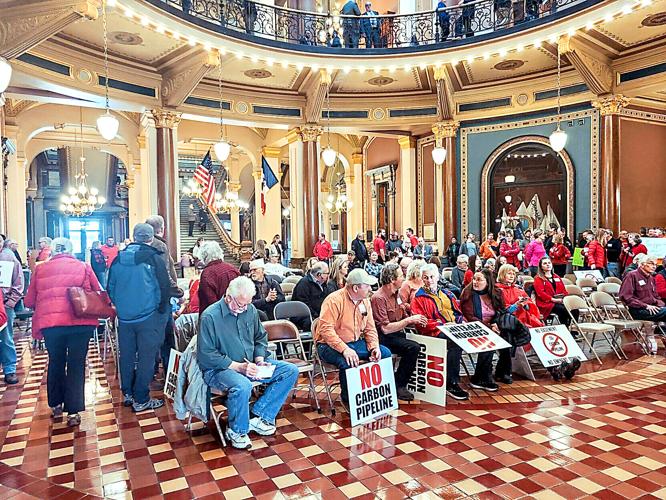 Protesters gather March 30 for a demonstration at the Iowa State Capitol against carbon dioxide pipelines. In the 2022 legislative session, Republicans in the majority stopped a bill that would have protected Iowans from land seizures along the CO2 pipeline routes.

AMES—Despite the politics and protests, Summit Carbon Solutions is still optimistic about its pending pipeline.

“It’s a $5 billion project, so there’s always twists and turns with any major project, but we feel really good about it,” said chief operations officer Jimmy Powell.

Summit’s mission is to build a carbon dioxide pipeline across five states, the largest chunk of which would be in Iowa, totaling more than 2,000 miles. It would connect to 32 partner ethanol plants, taking their CO2 byproduct to be stored underground in North Dakota, a process known as carbon capture.

The Ames-based company has run into various forms of opposition. Public affairs director Jesse Harris argued the detractors are not representative of most Iowans.

“Sure, there are some opponents, but I think the flip side of that equation is there’s a substantial amount of supporters as well,” he said.

Summit has secured a little more than half the necessary miles. Its primary way to get permission to cross thousands of people’s land is voluntary easements, essentially a payment to cross private land.

The easement ratio is higher in N’West Iowa. In O’Brien County, Summit has 75 percent of the route secured. It’s 71 percent in Sioux County.

About 2,350 landowners have signed easements, as of Jan. 1, for the whole route. Summit officials would not say how much money has gone out. However, they said the company has spent $600 million total so far, including easements as well as materials, payroll and other expenditures.

Powell said he understands the hesitancy of landowners, many of them farmers, to allow his company to cross their land.

“Some people take longer to make that decision and some people make it fairly quickly,” he said. “Our position is and has always been that we’re going to continue to reach out to landowners, continue to share information and at some point, hopefully, reach an agreement with them.”

But what if a landowner refuses to cooperate with the pipeline? That’s where Summit could pursue eminent domain, the top concern of most anti-pipeline advocates.

The Iowa Utilities Board is the state’s governing agency for projects like this. If the IUB permits Summit, the company would be able to pursue eminent domain where it had not got easements. The IUB has decided it will hold Summit’s hearing at the Webster County Fairgrounds in Fort Dodge but has not yet determined the date of that hearing.

Regardless, Summit officials still are looking at August to begin construction, keeping the issue imminent in minds of those leading action against it.

Constituent concern over land seizures led state Sen. Jeff Taylor to write a bill last year that would have banned eminent domain for Summit and similar projects. The Sioux Center Republican’s proposal would have removed the IUB’s permitting role over CO2 pipelines.

Taylor argued it is unconstitutional for a privately owned company to force its way onto land it does not own. He said it goes against the Fifth Amendment, the Iowa Constitution and common sense.

Republicans killed the bill on Feb. 16 before it could get a floor vote.

An offshoot of the Iowa-based Summit Agricultural Group, Summit is not the only corporate interest looking to build a CO2 pipeline in Iowa.

Navigator CO2 Ventures of Texas is further behind in the approval process, but its route would include the POET Biorefining plant south of Ashton. There also is Wolf Carbon Solutions of Canada, which is planning a smaller CO2 line on the east side of the Hawkeye State.

Proponents say the carbon capture projects will support ethanol and therefore Iowa farmers. Pipeline proponents are quick to bring up the fact that more than half the state’s corn crop goes toward biofuels.

“We support the ethanol industry. This project is designed to support ethanol, which is in turn supporting agriculture,” Harris said.

Environmental concerns, chiefly climate change, are the genesis for the pipelines. Ethanol production emits CO2 into the atmosphere as a byproduct, but biofuel producers can shrink their carbon footprint with the carbon-capture system. The end effect is ethanol as a cleaner fuel.

Summit officials have said, regardless of individual stances on climate change, the market is moving in a dark green direction. In California — where nearly one in eight Americans live — state authorities already have started to phase out carbon-intense energy sources and are aiming for more cuts.

If ethanol is to stay viable, it needs to adjust, according to Jeff Altena. He is the operations director for Siouxland Energy Cooperative west of Sioux Center, one of the ethanol plants on Summit’s route.

“If you’re not making these kinds of investments and partnering with people like Summit Carbon, the product you’ll make will probably not hold that market value and if it doesn’t hold the monetary value, your longevity is limited,” Altena said.

Powell added the company's stance that it would continue to pursue voluntary easements even after it would get its permit from the IUB. He said eminent domain is not Summit's first option.

“It’s naive for anyone to think that there isn’t going to be some areas along that pipeline — and we think they’re going to be very few — where we just can’t reach an agreement. If that’s the case, then yes, that’s one tool that we have, eminent domain,” Powell said.

Politically speaking, Taylor maintains that still is not good enough. At a public forum in December, the Republican lawmaker said he is reintroducing his pipeline proposal for the 2023 legislative session, positing “public benefit” as not synonymous with “public use,” the traditional threshold for projects using eminent domain.

“It’s going to be an uphill battle,” Taylor said. “I’m going to press for doing, ultimately, the right thing which is removing this temptation altogether from the utilities board.”

Powell and Harris said the company has contingency plans if permitting does not go according to plan. The proposal already has gone through many adjustments including 2,800 tweaks to the route based on local feedback.

Harris also said that the pipeline approval process is different in the other states they plan to build in — Minnesota, Nebraska and both Dakotas — but he remained positive about Iowa.

“It’s hard for us to speculate about what bills may or may not come up,” he said. “We’ll continue to have conversations with legislators, their constituents and landowners to make sure that they know very clearly what the benefits of this project are.”

REGIONAL—It’s been more than a year since the pipeline plots landed in N’West Iowa.