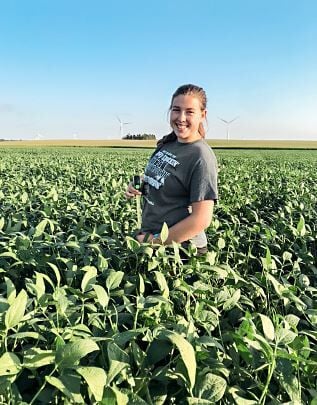 South O’Brien High School senior Kaeley Einck stands in her grandfather’s soybean field in July 2018 in rural Primghar while measuring the height of the crop. In May 2018, Einck began conducting what became a two-year agriscience project that analyzed the impact wind turbines have on nearby crops. The project earned her a gold rating in the 2020 Iowa FFA Agriscience Fair. 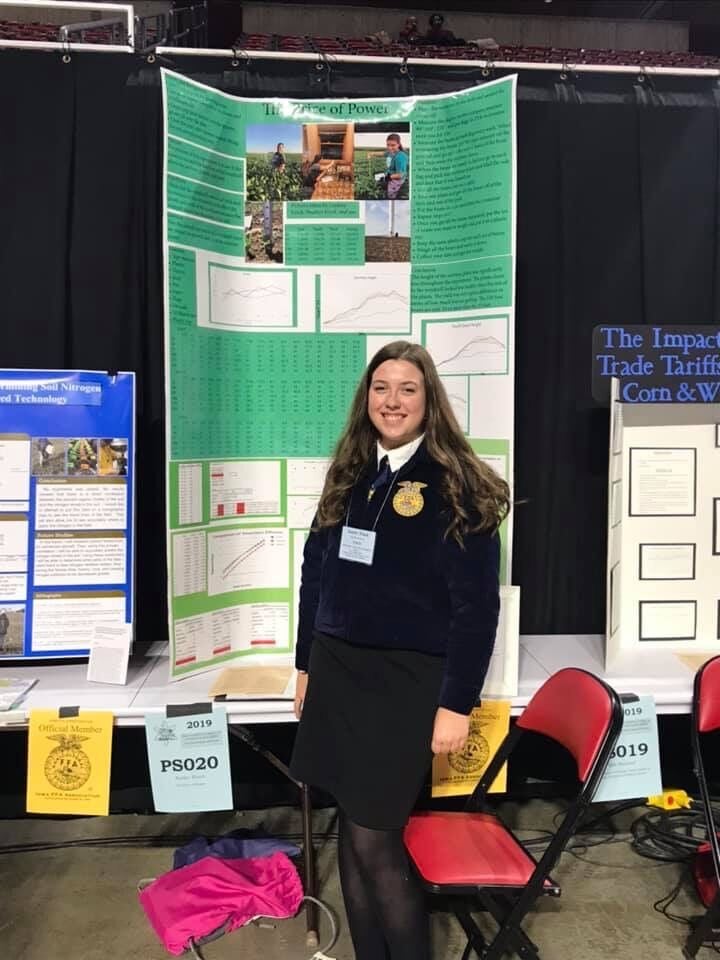 South O’Brien High School senior Kaeley Einck poses next to a board displaying her findings from her agriscience fair project at the 2019 State Science + Technology Fair of Iowa at the Hilton Coliseum in Ames. Her project, which looked at the impact wind turbines have on nearby crop yields, earned her a gold rating in the 2020 Iowa FFA Agriscience Fair.

The senior at South O’Brien High School in Paullina earned a gold rating in the plant science category at the virtual Iowa FFA Agriscience Fair for her project looking at the effects wind turbines have on nearby crop yields.

Her work also earned a bronze rating at the national level, although Einck was ultimately not chosen to advance as a national finalist.

Still, having her project be recognized at nationals still was a pleasant shock for Einck.

“I was really surprised to get in because I knew it was really hard for people to get in there and we didn’t really have a lot of people from our school to do that. I was happy that I got it just for Mr. Kumm’s recognition and all the help he did,” Einck said in reference to South O’Brien’s FFA adviser, Eric Kumm.

In May 2018, Einck began tracking the growth of soybean yields at her grandfather’s farm near her own home in rural Primghar.

“I measured growth for the first year every week,” she said. “That took about 30 minutes every week, so the hours really totaled up.”

She continued the project the next year when her grandfather planted corn.

“I measured out the stakes and I did 25-foot increments up to 250 feet,” Einck said. “I just measured how far away the corn was from the windmill and what the yield was to see if the farther you got out it would make a difference.”

She compared the yields of the crops within the 250-foot radius to those outside the radius. Her conclusion: Proximity to a turbine did not affect crop yields.

Einck would have presented her findings at the Iowa FFA Agriscience Fair in March — which is part of the State Science and Technology Fair of Iowa in Ames — had it not been postponed due to the coronavirus pandemic.

Kumm said the Iowa FFA Association kept pushing back the date of the fair until the organization chose to conduct the contest remotely by having students send information about their projects.

“They didn’t get to visit with the kids or see their presentation boards,” Kumm said. “We had six that followed through in filling out the paperwork because that is a little bit extra work; nobody was really too fired up with the way things were going when that stuff was due.”

Einck sent information about her project to the Iowa FFA Association, where it then was evaluated. The organization announced the results in the summer.

Competitors who rank gold at the state level then were able to apply for consideration as a finalist in the National FFA Agriscience Fair. Only the top 10 applicants were chosen as finalists.

“Anybody that did advance at least received a bronze rating but wasn’t picked as one of the top 10 in the country,” Kumm said. “Still a pretty neat honor. She put a lot of work into that the past couple years.”

Besides receiving a gold rating at the state agriscience fair and receiving bronze nationally, Einck was named a finalist in the Iowa FFA’s Stars Over Iowa program for her work.

She noted her early involvement in FFA, which she joined in the eighth grade, and said she has accomplished much of what she set out to do in the organization.

Her other high school activities include participation in the dinner theatre program, basketball and golf.

Regarding her future plans after graduation, Einck said she is interested in pursuing higher education for a career in the medical field but does not yet know where she will apply.

This story was first published in the Nov. 7 print issue of The South O'Brien Sun.