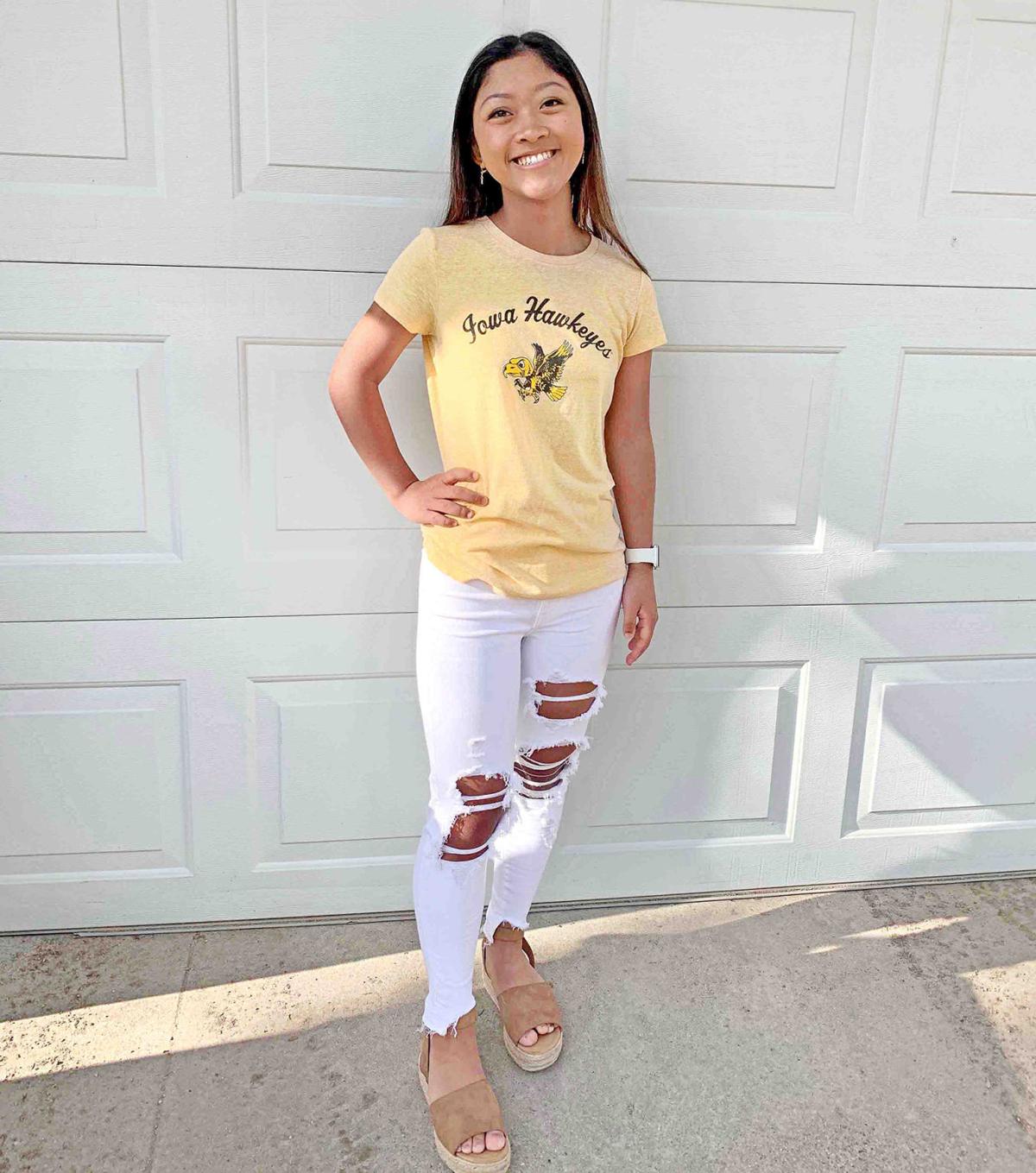 Angela Nyunt of Primghar has chosen to commence her college career early. The 16-year-old South O’Brien High School junior was accepted in January into the Bucksbaum Early Entrance Academy at the University of Iowa in Iowa City after applying to the program in October. 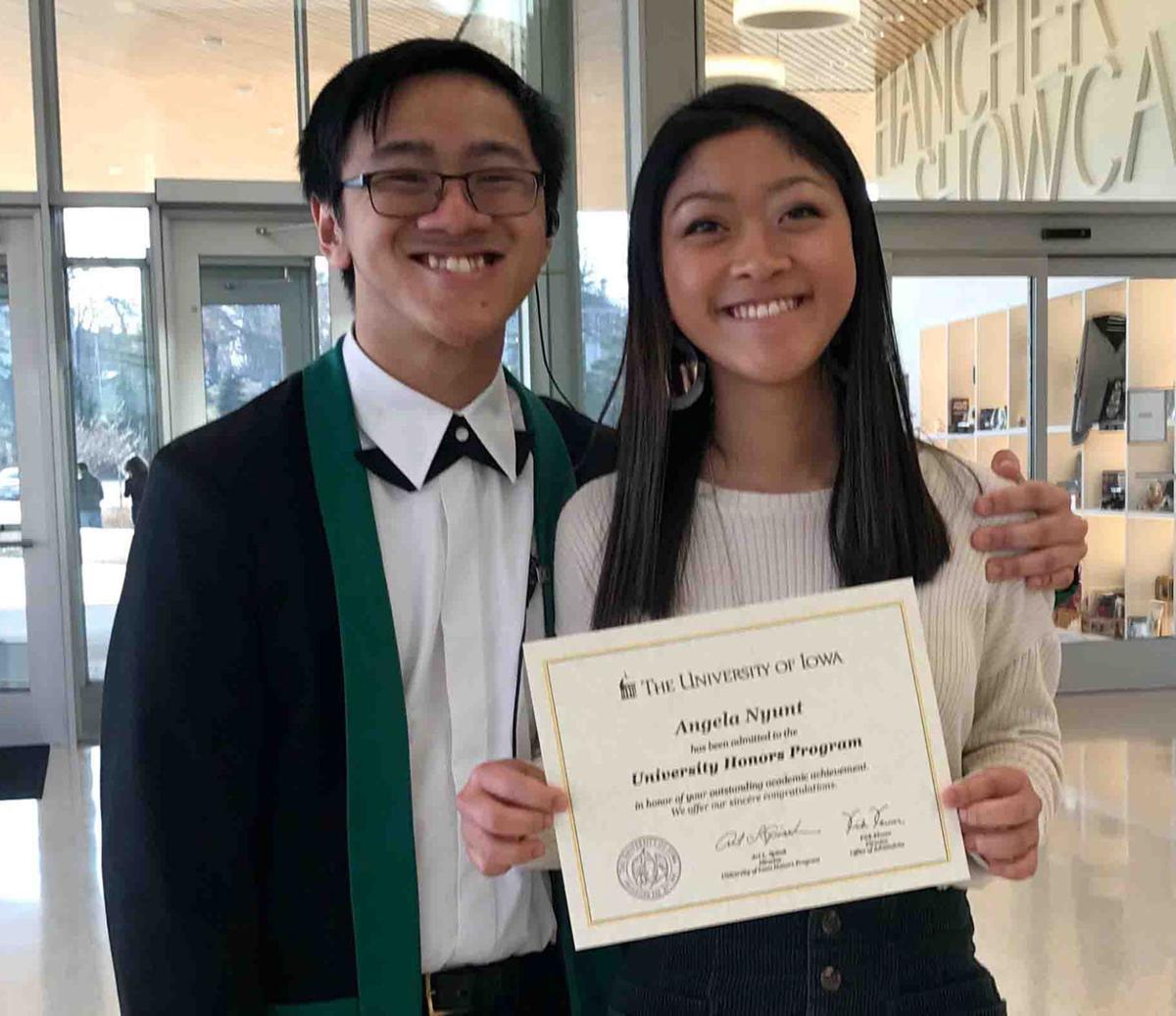 Angela Nyunt of Primghar shows off a certificate recognizing her acceptance into the University of Iowa Honors Program. The 16-year-old South O’Brien High School junior will join her older brother Richard, a 2019 South O’Brien graduate, at the college in Iowa City for 2020-21 after being accepted into the Bucksbaum Early Entrance Academy.

Angela Nyunt of Primghar has chosen to commence her college career early. The 16-year-old South O’Brien High School junior was accepted in January into the Bucksbaum Early Entrance Academy at the University of Iowa in Iowa City after applying to the program in October.

Angela Nyunt of Primghar shows off a certificate recognizing her acceptance into the University of Iowa Honors Program. The 16-year-old South O’Brien High School junior will join her older brother Richard, a 2019 South O’Brien graduate, at the college in Iowa City for 2020-21 after being accepted into the Bucksbaum Early Entrance Academy.

PAULLINA—Angela Nyunt has chosen to commence her college career early.

The 16-year-old junior at South O’Brien High School in Paullina was accepted in January into the Bucksbaum Early Entrance Academy at the University of Iowa in Iowa City after applying to the program in October.

Nyunt said she is “incredibly honored” to be accepted into the academy, which is a program for students to begin full-time, on-campus study at the University of Iowa after their sophomore or junior year of high school.

“Last year, I believe they accepted 12 out of 50 individuals who applied; when you do the math, that equals out to a 24 percent acceptance rate,” Nyunt said. “There are so many people my age who are truly intelligent and blessed to be academically inclined.

“To be entirely honest, I don’t know if I would even put myself in the same category as those people,” she said. “I just think I put in a lot of effort and hard work to get to where I am, and it’s paid off.”

Nyunt, who has been attending summer camps at the University of Iowa since she was in the eighth grade, will take part in the academy during the 2020-21 academic year.

“The Bucksbaum Early Entrance Academy is organized by the same people — the Belin-Blank Center — who put on said summer camps, so I’ve known about the academy for a couple of years,” she said.

“The option to attend college early was always in the back of my head, but I never really contemplated it until last summer,” she said.

The camp gave students an inside look and hands-on experience in some of the college’s on-campus research facilities.

“That affirmed my previous thoughts,” Nyunt said. “After spending two immersive weeks on campus meeting with professors and researchers, I knew that I belonged there.

“I couldn’t pass up the amazing opportunity to enroll a year early,” she said. “I felt like I was in a good place, both personally and academically, and applying to the academy felt like the right thing to do.”

While Nyunt will attend and live on the campus of the University of Iowa as a college freshman for 2020-21, she still technically will be enrolled as a South O’Brien senior at the same time.

“I will be working toward attaining my bachelor of science degree while finishing up the classes I need for my high school diploma,” Nyunt said.

“The South O’Brien school board has approved certain University of Iowa courses to act as ‘substitutes’ for required high school classes, which makes the process a lot easier for myself,” she said.

Nyunt noted giving up her senior year of high school was “an extremely tough decision,” but she believes she made the most beneficial choice for herself.

“For 2020-21, I’ll still be allowed to go to homecoming, prom and graduation, but I can’t participate in any extracurriculars,” she said.

“I’ll miss seeing my friends at school every day the most,” she said. “All of the teachers and the activities I’ve been involved with at South O’Brien have made my high school experience incredibly memorable.”

Nyunt was thankful she will be able to graduate with the rest of her South O’Brien classmates next year.

“Sadly, a lot of early entrance students in the past have been unable to get their high school diploma, but I’m grateful that my high school was so willing to make accommodations for me in order to graduate,” Nyunt said.

“I’ve grown up with my class, so it’s important to me that I get to come back to graduate with them,” she said.

As for the academy she will be a part of for 2020-21, Nyunt mentioned the University of Iowa is planning to resume in-person classes this fall, though that depends on whether the coronavirus pandemic is over by then.

“The early entrance academy will go along with whatever the university decides as they receive further guidance from the Iowa Department of Public Health,” she said.

Nyunt noted the Belin-Blank Center plans field trips as well as cultural and social events throughout the academic year.

“Along with that, the Belin-Blank Center staff hosts a weekly seminar to discuss time management, study and learning skills, study-abroad opportunities and other topics to help ease the transition into college,” she said.

Nyunt plans on majoring in human physiology with a minor in biology on the pre-medicine track.

“I plan on being an ophthalmologist — eye surgeon — in the future,” she said. “I have three cousins who were born with congenital cataracts; since I’m very close to them, they’ve kind of pushed me to choose this career path.”

Nyunt will join her 19-year-old brother Richard at the University of Iowa, where he is a freshman this academic year.

He graduated from South O’Brien in 2019 and is working toward a bachelor’s degree in computer science.

As for the younger Nyunt, she is following in the footsteps of her and her brother’s parents, Drs. Soe Nyunt and Jeannett Wu of Primghar, by pursuing a career path in health care.

“My parents are both doctors at the hospital in Primghar, so I’ve grown up with health care my whole life,” Angela Nyunt said. “I am incredibly excited to be on campus this fall and embark on this new chapter of my life.”

This story originally was published in the May 16, 2020, edition of The South O'Brien Sun.

REGIONAL—Angela Nyunt has always wanted to pursue a career in the medical field.