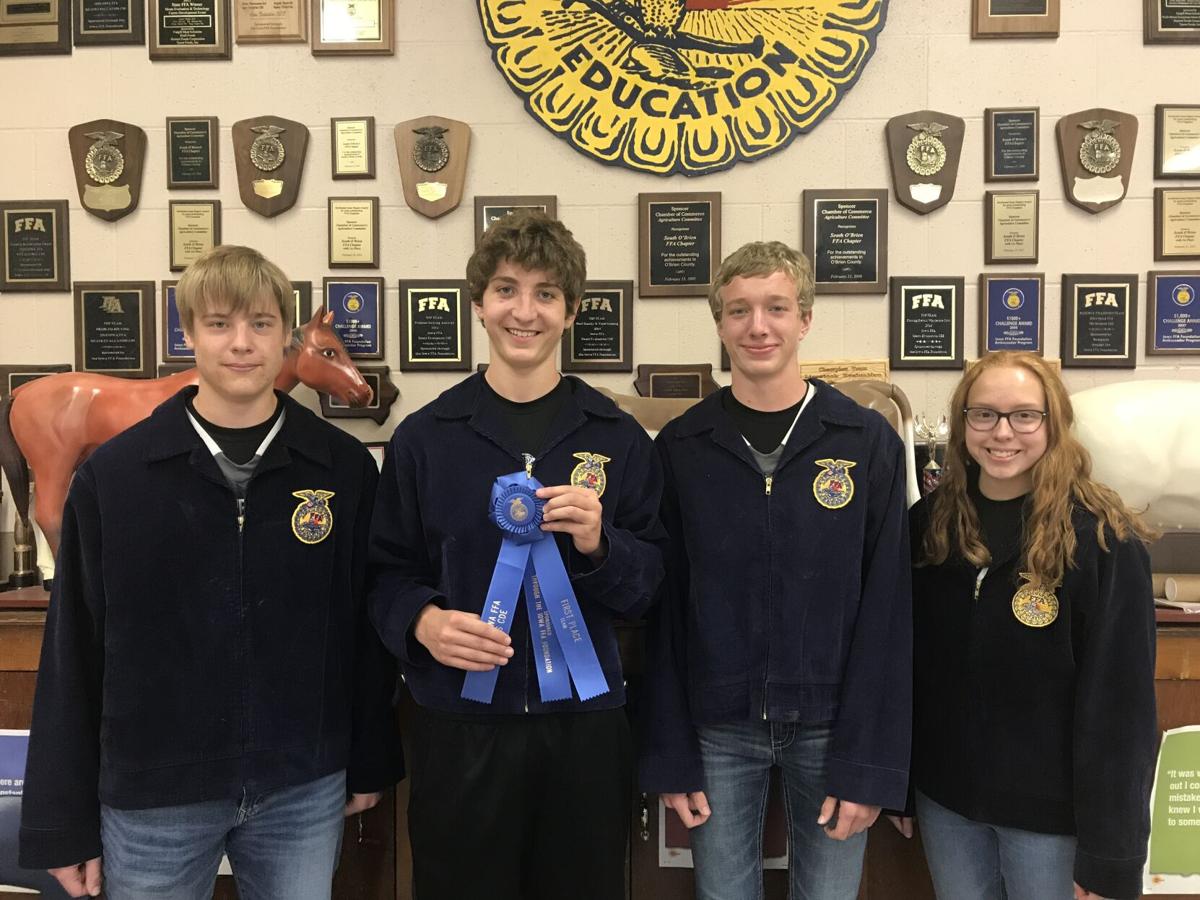 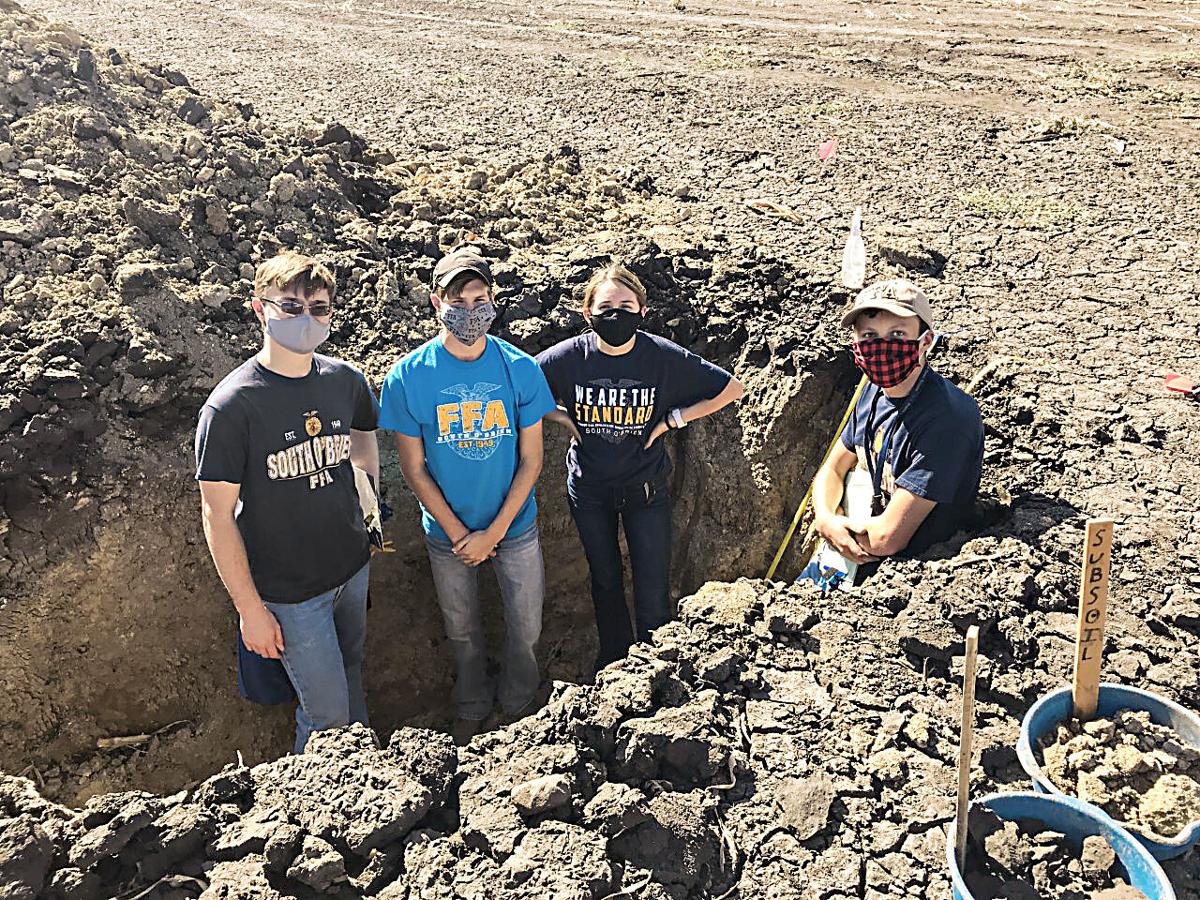 PAULLINA—South O’Brien High School’s FFA chapter has been shining bright in what’s been a year unlike any other for the agriculture education organization.

However, this year’s event, held Sept. 26, was by hosted by Iowa State University virtually.

Then on Oct. 7, South O’Brien FFA’s soils team competed at Buena Vista University near Storm Lake and was named district champion in the competition.

“As everywhere else, it’s been different and challenging,” said South O’Brien FFA adviser Eric Kumm. “It’s been nice there’s been some virtual things that they’ve been able to do, some contests.”

The state meats judging competition usually takes place in August and in person at the ISU campus in Ames. However, due to the coronavirus pandemic, the event was livestreamed over Zoom and teams competed remotely.

South O’Brien’s FFA team competed against 22 other chapters across the state in the meats judging competition.

Members of the South O’Brien’s first-place team were sophomores Kyan Kruse, Hudson Oolman, Leo Sells and Abby Stout. Individually, the students achieved the following rankings out of the 78 students who competed statewide:

For the contest, the students identify 25 cuts of retail meat by classifying them as beef, pork or lamb. They also identify from which part of the animal the cuts originate and grade them based on their quality. The students similarly evaluated wholesale cuts of meat and performed a problem-solving activity.

Unlike the meats team, South O’Brien’s soils team was able to compete in person.

The team consisted of seniors Bryce Rasmussen, Eric Mars, Abigail Boardman and Jack Farquhar. The students competed against 16 other teams from northwestern Iowa.

Kumm noted there had been somewhat of a challenge finding a location to hold the soils contest as some college campuses had restrictions on in-person gatherings.

“Buena Vista was generous enough to let us go out to their new ag learning farm that they’ve set up there with the college,” Kumm said.

The contest consists of two parts: The first part is a 40-question general knowledge test and the second is evaluating soil in four pits outside.

“They’re looking for the amount of topsoil and subsoil, checking for the texture of that. That tells you how much clay or sand is in there, which can tell you some things about water-holding capacity and fertility, how productive the soil is going to be,” Kumm said.

The students also evaluate the soil’s fitness for potential projects, such as installing a septic tank or a basement.

Although the four seniors were the only South O’Brien students who competed, five other FFA members came to the contest to observe and prepare for when they compete next year.

“Most years, we have one or two contests that are workshops that we’d go to ahead of this, but the spring one was canceled and the fall one they weren’t able to have this year either due to restrictions,” Kumm said.

This story was first published in the Nov. 7 print issue of The South O'Brien Sun.

When Eric Kumm filled out the application for the Iowa Association of Agricultural Educators’ 2020 Outstanding Teacher Award, he did not expect to receive the accolade.

“I’m not real fond of filling out applications, but our Iowa Association of Ag Educators president approached me and asked if I’d fill it out, so I did and then ended up getting it,” said Kumm, who is the ag education teacher at South O’Brien High School.

He had completed the application for the award toward the start of 2020 and was notified he was the recipient in the spring.

Kumm said it was a surprise but a nice honor to be included among the best agriculture educators in the state.

Filling out the application for the recognition also gave Kumm time to look back on his 26 years teaching at the school and heading up its agriculture department.

“It gives you time to reflect on some of the things that the kids have done in the past, the community support that the program has and that’s what I really looked at, was some of those neat things that you kind of forget about over the years.”