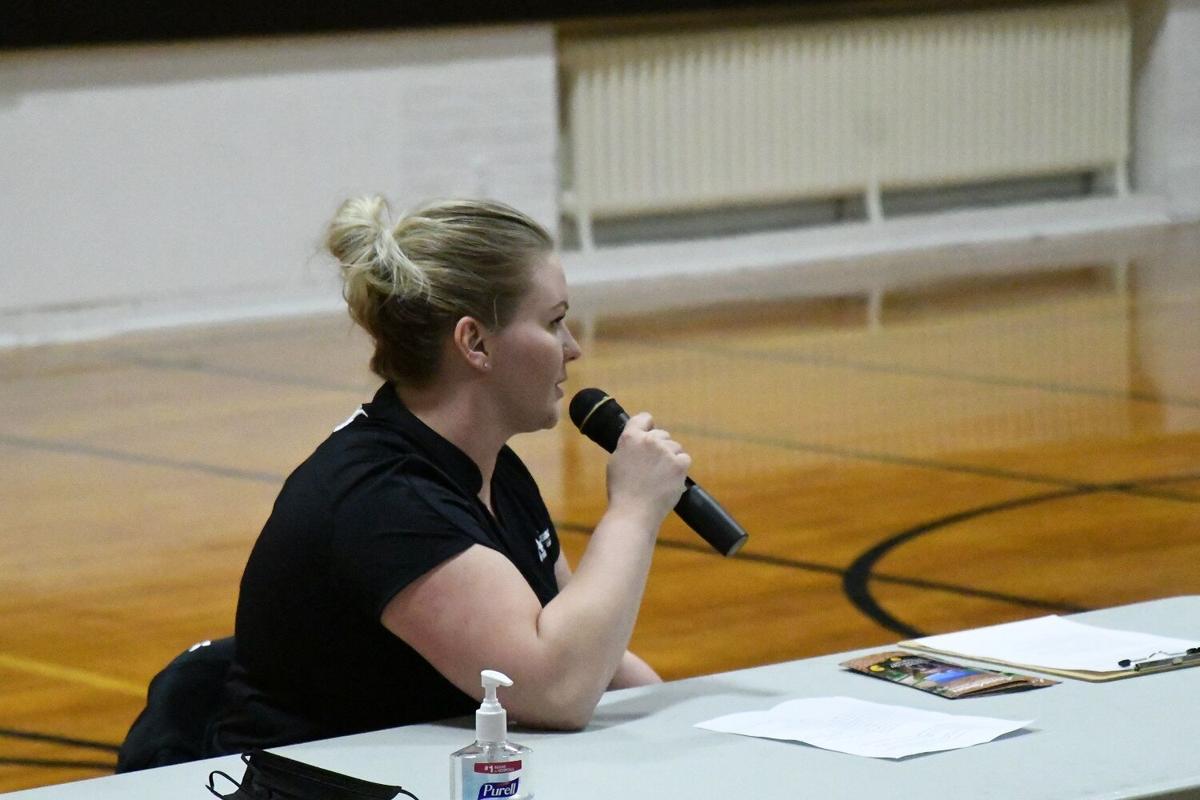 Kellie Einck speaks about her role as service manager at AgriVision Equipment in Paullina during South O’Brien High School’s Career Day event for sophomores Wednesday, April 21. A 2014 South O’Brien graduate, Einck also said she chose to remain in her native county because it’s her home and has a low cost of living. 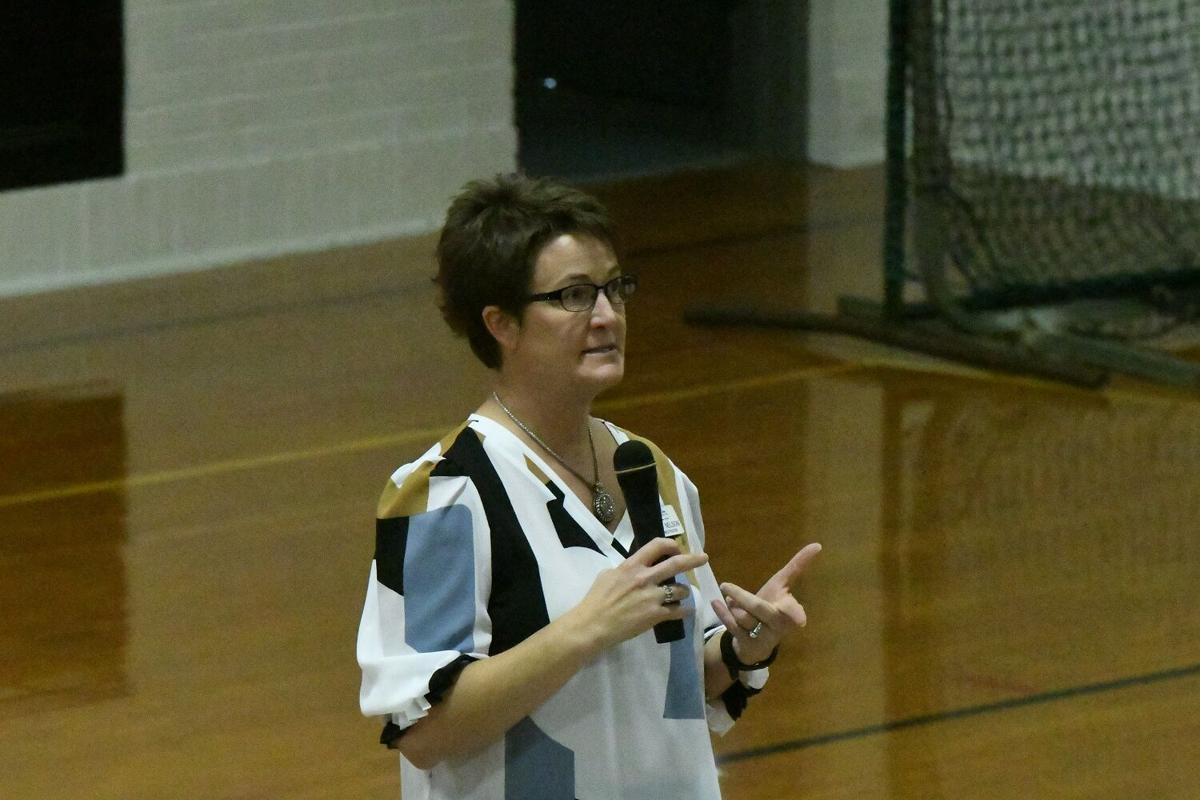 Wendy Nelson, administrator of Prairie View Campus in Sanborn, talks about her job and the various careers offered at the long-term care facility. She was one of four speakers at South O’Brien High School’s Career Day event Wednesday, April 21. 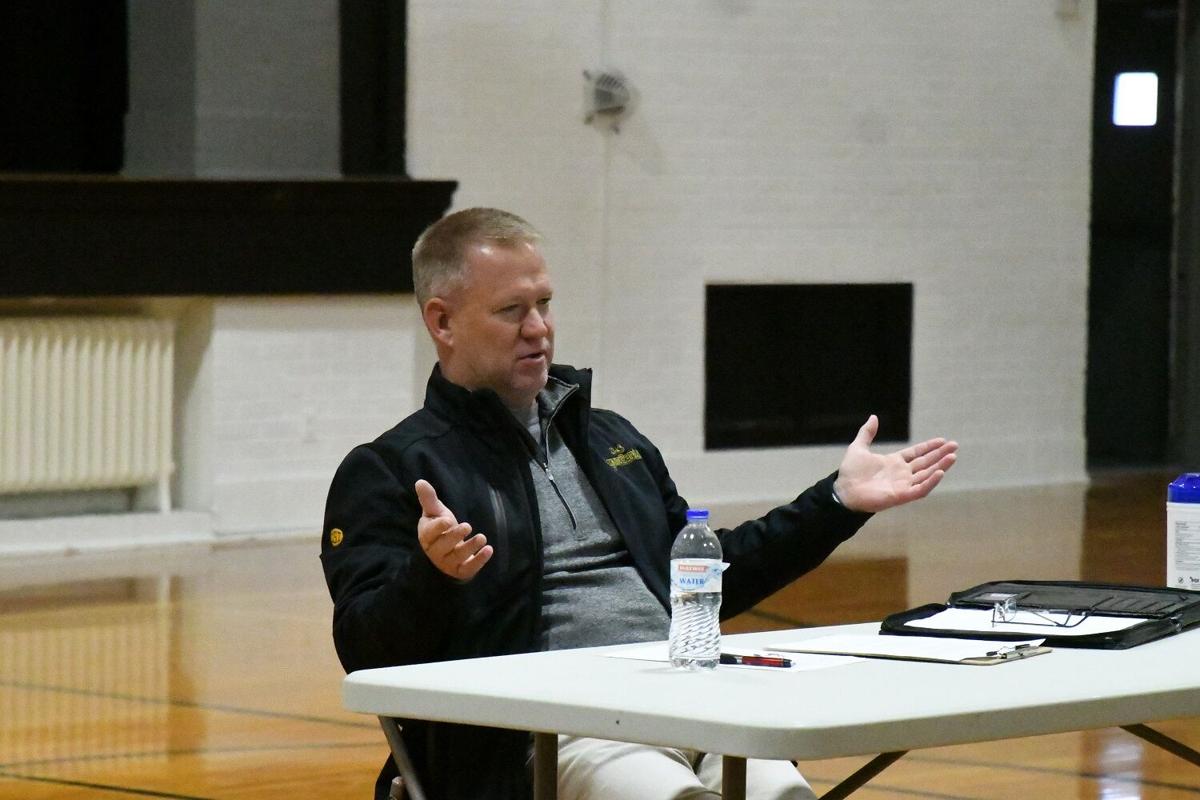 Todd Faust spreads his hands while speaking at South O’Brien High School’s Career Day event Wednesday, April 21. Faust, who is the business manager of C-S Agrow Service in Calumet, spoke about his job and offered advice to students seeking to gain job experience.

PAULLINA—Kellie Einck views her job as service manager at AgriVision Equipment in Paullina as part of the larger picture in the agriculture industry.

“I help farmers feed the world,” said Einck, a 2014 graduate of South O’Brien High School in Paullina, during a Career Day panel discussion for South O’Brien sophomores on Wednesday, April 21, in the school gym.

Einck was one of four business representatives from around O’Brien County who spoke about their jobs to South O’Brien sophomores. The other three were Adam Besaw of Maintainer Corporation of Iowa in Sheldon, Wendy Nelson of Prairie View Campus in Sanborn and Todd Faust of C-S Agrow Service in Calumet.

After Einck graduated from high school, she enrolled in the two-year diesel technology program at Northwest Iowa Community College in Sheldon and initially worked as a service technician. She later went on to get a bachelor’s degree in accounting, which allowed her to eventually switch into the service manager role.

Having a degree alone, however, is not all that’s needed. Einck also stressed the importance of being a problem solver, a communicator and having a good attitude when it comes to job success.

She noted how a starting technician makes about $20 an hour while the highest-paid technicians can make about $35 an hour with a potential for a $10 an hour bonus. Meanwhile, the cost of living in a place like N’West Iowa would be lower for such an employee compared to a comparable role in a bigger city.

Besaw, who is Maintainer’s senior research and development designer, spoke about the design and engineering jobs at the Sheldon manufacturing company. Some of them require just a two-year degree from a school like NCC while other roles need a four-year engineering degree.

Working at Maintainer requires lots of math, engineering and computer skills, but Besaw also noted the importance of being a team player when it comes to working there.

“Don’t be afraid to make mistakes. Nobody’s perfect,” he said. “That goes a long way just to admit it and then it’s a bump in the road. Keep moving on.”

Besaw also spoke about how his position occasionally lets him travel all over the country, but living in Sheldon means his typical commute to work is much shorter than what it would be in an urban setting.

“There’s no better place to raise your family. Every school in northwest Iowa is a great school. The community is supportive and invests in your education,” he said.

As administrator of Prairie View Campus, Nelson said she wears many different hats and that no two days are the same.

“The only consistent thing about my job is that things will change,” she said. “If you guys like set schedules so that you know what you’re doing, and when you’re doing it and how long you’re going to be doing it, health care is not for you.”

She said there are several different positions across the campus, which is divided into a nursing home, a assisted-living center and an independent-living center. The staffing roles include nursing, housekeeping, maintenance, human resources, accounting, activities, therapy and others.

Depending on the amount of experience a licensed nurse may have — and where a long-term care facility is and its size — Nelson said that position could pay $36-$40 an hour, as well as health insurance and a retirement. But the biggest benefit she said employees get is that the job is rewarding.

“We take care of these neat grandmas and grandpas, and they are super appreciative of what we help them with that they can’t do for themselves anymore,” Nelson said. “Their smiles and kind words melt our hearts.”

Faust, who is C-S Agrow’s business manager, said his job is to make sure the grain-bin construction and sales company is on track financially.

“If you’re not making money, you’re not going to have a business,” he said.

Besides being well paid and receiving generous benefits, he said C-S Agrow workers also get a feeling of satisfaction with the projects they complete and making customers happy.

The speakers also offered advice to high school students who may be starting to think about potential careers. Nelson encouraged students to get part-time jobs at some point before entering the workforce full time, since doing so will give them experience they will not be able to get through schooling.

Besaw reiterated the importance of taking math classes in school, as well as learning a foreign language.

“Northwest Iowa is way more diverse than it was 20 years ago,” he said.

Einck and Faust, for instance, suggested students look for job shadow opportunities to get a sense of possible career paths that suit them or don’t suit them.

“Find something you love,” Einck said. “And if you start a career or go to school and find it’s not what you’re liking, go do something different.”

This story was first published in the May 1, 2021, print edition of The South O'Brien Sun.