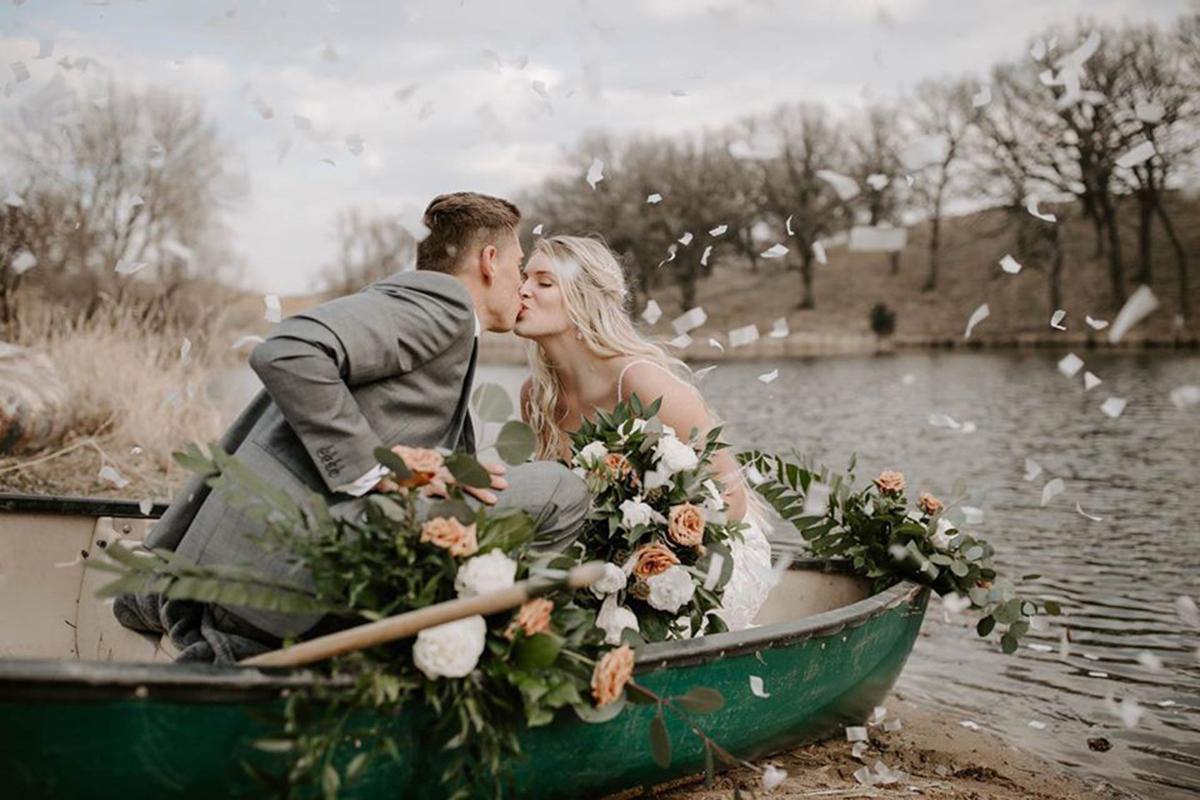 Newlyweds Jacob and Paige Vander Wilt kiss one another Sunday evening, April 5, during a boat ride in a pond near Fairview, SD. Their wedding was done as quickly as possible due to the coronavirus pandemic and worry of a potential lockdown situation in Iowa. 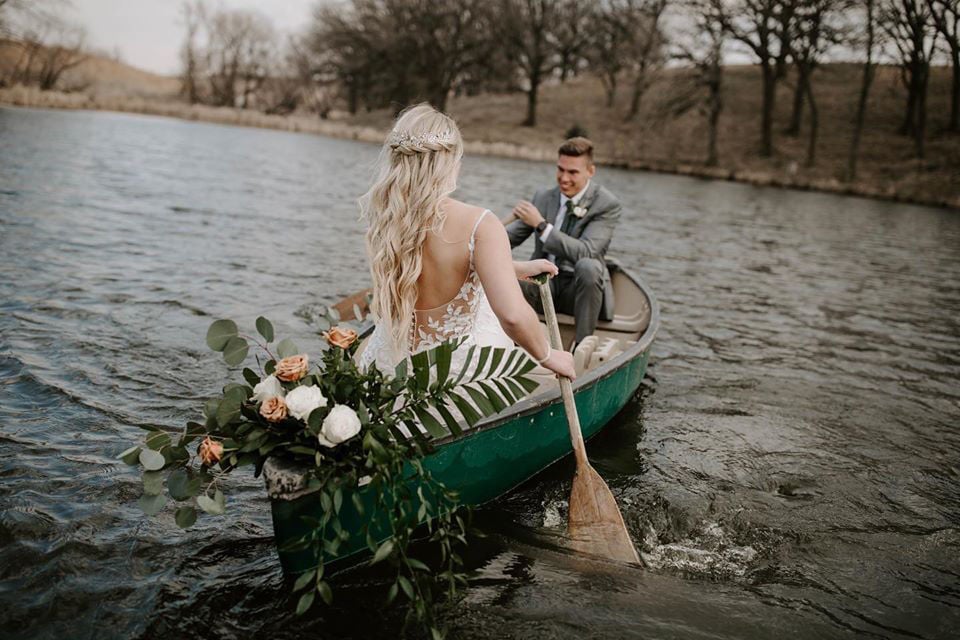 Jacob and Paige Vander Wilt row a canoe in a private pond near Fairview, SD, after getting married Sunday, April 5. The wedding date was pushed up due to concerns about a potential lockdown because of the coronavirus pandemic.

Newlyweds Jacob and Paige Vander Wilt kiss one another Sunday evening, April 5, during a boat ride in a pond near Fairview, SD. Their wedding was done as quickly as possible due to the coronavirus pandemic and worry of a potential lockdown situation in Iowa.

Jacob and Paige Vander Wilt row a canoe in a private pond near Fairview, SD, after getting married Sunday, April 5. The wedding date was pushed up due to concerns about a potential lockdown because of the coronavirus pandemic.

SIOUX CENTER—Jacob and Paige Vander Wilt said it felt like a dream to get married Sunday, April 5, in Fairview, SD.

“It doesn’t seem real just because we’ve been together for so long to the point where, well, yeah, we knew we were going to get married,” Jacob said.

“It happened all so quickly, so I still kind of feel like I’m living in a dream,” Paige said.

Their original plan was to get married on Saturday, April 25, but due to the coronavirus pandemic, they were not sure if getting married that day still would be an option.

Originally, the wedding was supposed to be held at First Reformed Church in Sioux Center and it took them nine months to plan.

Jacob, 22, said he knew they were going to get married whether they had 150 people or 10 people. He thought Gov. Kim Reynolds would not put Iowa under lockdown due to the coronavirus, but wanted a backup plan. So, he contacted the Rev. Travis Else from First Reformed Church.

“Personally, I don’t think that would happen but I wanted to contact my pastor because we have been staying in touch throughout all of this, just to see what was going to happen, and we kind of had a Plan B,” Jacob said. “I said that we were still praying for a miracle.”

There was a conversation Jacob had with his pastor before deciding to go through with Plan B. Jacob and his pastor were worried about a potential stay-at-home order by April 25.

“I was kind of hoping he would say he would marry us with just our parents,” Jacob said. “But he said, ‘Well, you know it is my job. I can’t really just go out and preach to people in their homes because that’s my job. If we’re at a stay-at-home order, then I need to stay at home,” so I said, ‘OK. So then we can’t get married on April 25?’ He said, ‘No, you can still get married but you have to do it via Zoom,’ so I was like, ‘This isn’t happening.”

From that point on, the couple decided to move their wedding up.

“No one told us we had to. I guess I felt like the Lord’s will was to have our immediate family there and a couple of friends,” Jacob said.

With those arrangements made, the couple got married Sunday near a pond on private land in Fairview.

“Over there, the river is just a beautiful spot and me an Paige both like to be out in nature. It was a really neat area,” Jacob said.

Only immediate and personal family members were allowed to attend the wedding.

“Both of us said if we could go back, we’d plan the exact same wedding.”

The couple dated for four years before their wedding.

They attended Unity Christian High School in Orange City and Dordt University in Sioux Center together. Paige received a two-year business degree from Dordt in May 2019. Jacob is getting his bachelor’s degree in business and is taking online classes at Dordt where he is expected to graduate next month.

He popped the question to Paige during an outdoor excursion.

“I took her out to Paullina pond and grilled steaks and then had a picnic, and went out, there’s this little island, and I proposed out there,” Jacob said.

If there were to be a silver lining to the coronavirus pandemic, Jacob and Paige will have a unique wedding tale to tell for years to come.

“Several people have told us, ‘Wow, you’re going to have such a story to share with your kids someday,’ and that’s so true,” Paige said. “As far as this story goes, I mean it was a crazy one, but it’s kind of fun to tell.

“Jacob and I were just really relaxed about it,” she said. “We knew that that’s what we wanted, and we’re like, ‘OK, let’s do this.’”

SIOUX CENTER—The coronavirus pandemic has resulted in changes and closings in the Sioux Center area. This is a comprehensive list as hours may…