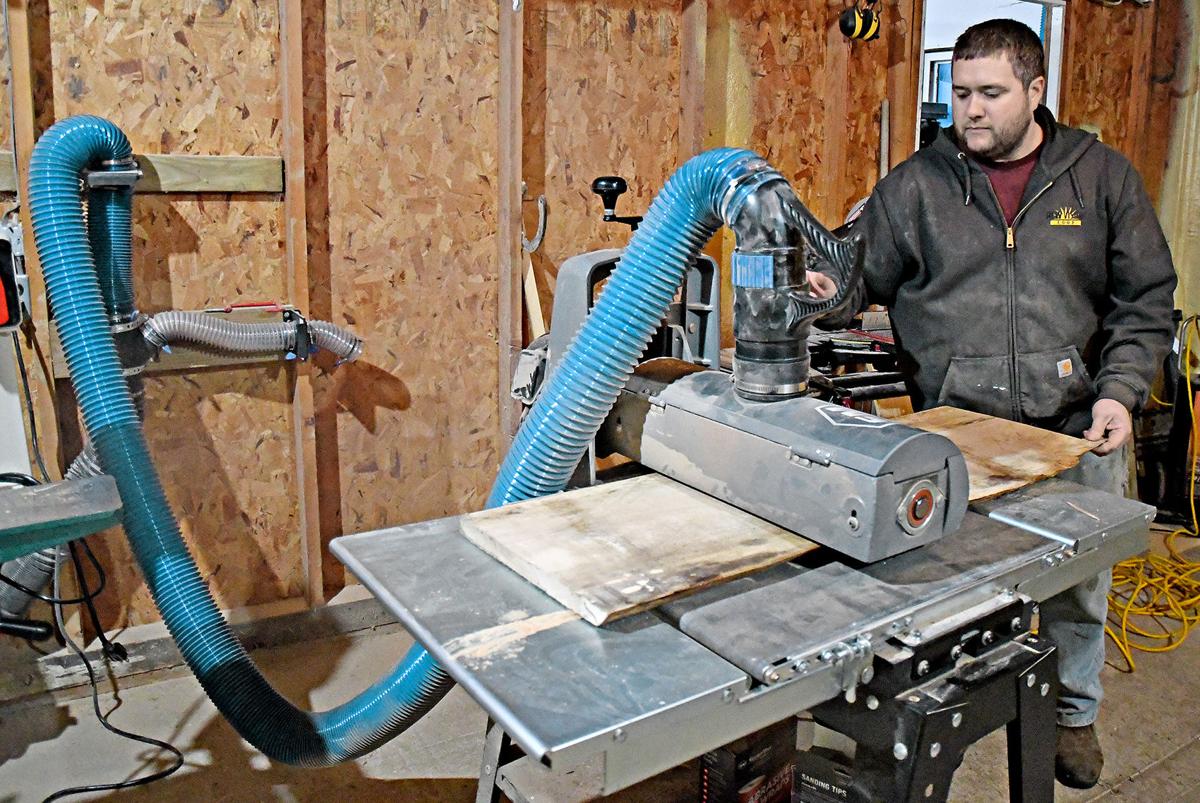 Brian Watterson runs a piece of wood through a drum sander. He and his wife, Lindsay, design and create custom-carved wooden signage through L&B Woodworks, which they describe as “a nice side hobby/business.” 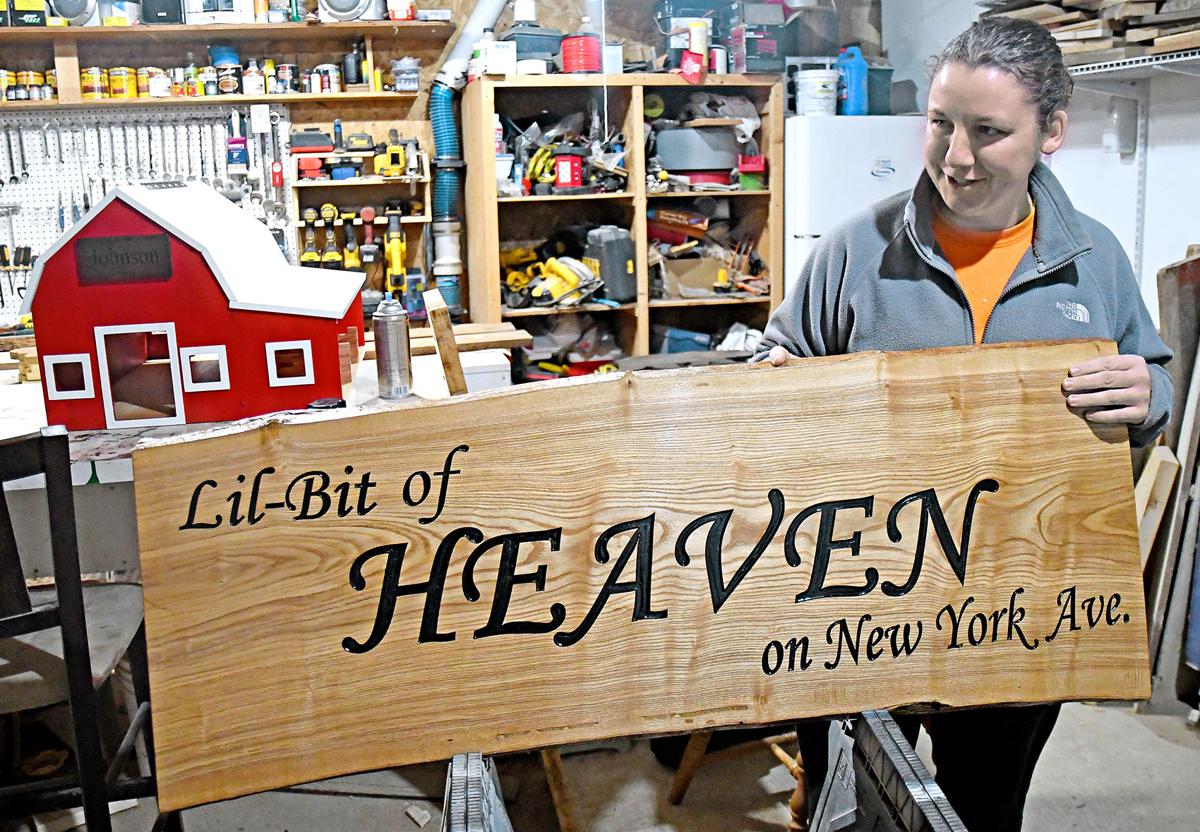 Lindsay Watterson talks about one of the many wooden signs she and her husband, Brian, have worked on through L&B Woodworks in rural Sibley. Custom-carved wooden signs are the focus.

Brian Watterson runs a piece of wood through a drum sander. He and his wife, Lindsay, design and create custom-carved wooden signage through L&B Woodworks, which they describe as “a nice side hobby/business.”

Lindsay Watterson talks about one of the many wooden signs she and her husband, Brian, have worked on through L&B Woodworks in rural Sibley. Custom-carved wooden signs are the focus.

SIBLEY—Buying an expensive piece of equipment was a sign Brian and Lindsay Watterson should turn a hobby of theirs into a business.

The rural Sibley couple design and create custom-carved wooden signs through L&B Woodworks, which they started about two years ago.

“We do all sorts of different signs,” Brian said. “With special requests, we’ve built random things. We’ve had all sorts of requests. It’s not just words.”

Among the miscellaneous items Brian, 31, and Lindsay, 32, have worked on are television stands, coffee and end tables, and a replica of a barn, but signs are their main focus.

That is thanks to an Axiom CNC machine they bought in 2017.

The couple use the computer numerical control machine to carve or laser-engrave people’s names, quotes and images into pieces of hardwood — including ash, cedar, maple, oak, pine, poplar and walnut — as well as recycled barn wood.

“We’ll use almost anything,” Lindsay said. “Walnut is more of an expensive wood. That has to be on request. You’re going to have to pay more because it’s harder to get.”

She handles the designing and carving parts of her and Brian’s projects.

“It’s fun to create something that’s going to mean something to someone,” Lindsay said.

Part of her job is to operate the CNC machine.

“It’s automated, so I go on to the computer and design what I want and how I want,” Lindsay said. “I put in the right bit and it just goes.”

Brian handles the building and woodworking portions of whatever project he and Lindsay are working on.

“I don’t have the engineering brain she does,” he said. “She can figure out how to build things and I just build them.”

People and businesses from Iowa, Minnesota and South Dakota have requested the couple’s services, although they have created signs of all shapes and sizes for places as far away as Taiwan.

“When the sign’s all done, if it’s a sign that doesn’t get any paint on it, then we varnish it,” Brian said. “Sometimes, they get painted. After we carve it, we do that. You varnish them and that’s it.”

The Wattersons have displayed and sold their products at various home and craft shows over the past couple of years across the region, including in Rock Rapids, Sanborn and Sibley as well as in Worthington, MN.

“We’ve kind of been getting our name out that way,” Lindsay said.

Brian and Lindsay have woodworking equipment — table saws, sanders, planers, jointers and other tools — spread out between two shops in rural Osceola County.

One shop is located inside a detached garage building next to their home and the other is situated inside a machine shed about four miles north of where they live.

What prompted the couple to turn their woodworking hobby into a business was the purchase of the CNC machine about two years ago.

“You can only do so much for yourself,” Lindsay said. “It’s kind of fun to do odds-and-ends jobs.”

Before that, Brian had just built wooden furniture for family members, including cribs and dressers for their two daughters, 5-year-old Peyton and 3-year-old Emma.

Their girls often hang out with them when they are working inside one of their shops, similar to what Brian did while growing up.

While being raised on a farm near Melvin by his parents, Jim and Nancy Watterson, Brian learned about woodworking from his father.

“I’ve just always liked doing it,” Brian said. “I’d help Dad when I was little. I messed around in the shop all the time.

Outside of their woodworking business, Brian and Lindsay, who grew up on a farm in rural Sibley, each have day jobs.

He is an equipment operator for the Osceola County Secondary Roads Department while she takes care of and custom-feeds hogs at three confinements.

“We’re not into it as a business to make a living,” Brian said. “It’s just a nice side hobby/business.”