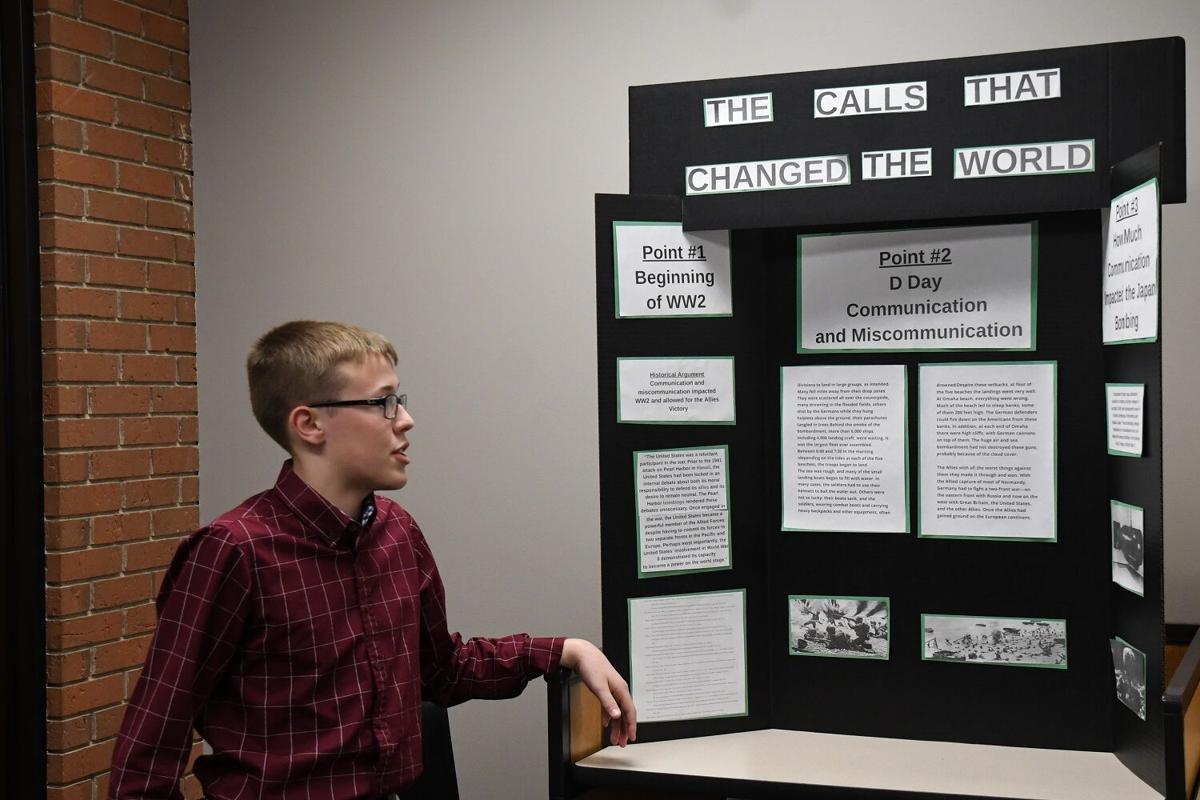 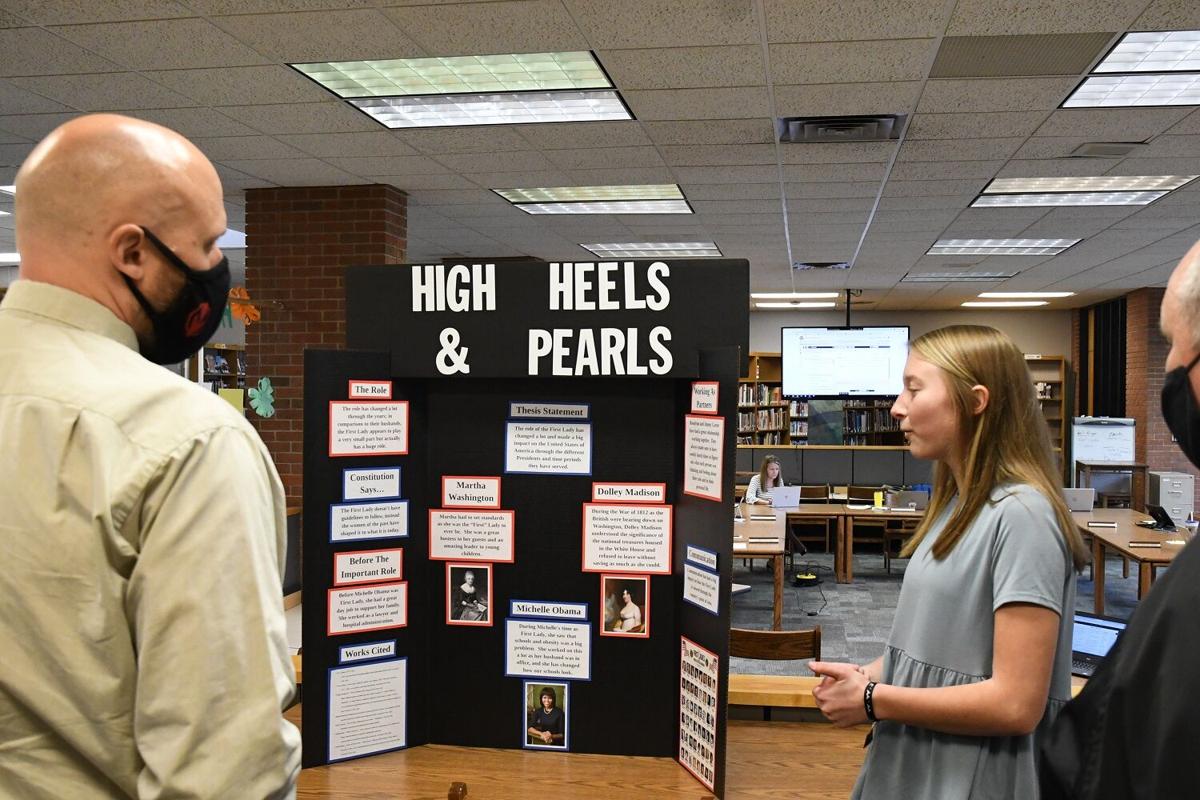 East Elementary principal Jason Groendyke listens as Sheldon Middle School eighth-grader Alison Wolf presents her National History Day project about the evolving role of the U.S. first lady. She was one of six students who shared their history work during the school board meeting earlier this month.

SHELDON—Sheldon Middle School teacher Justin TeGrotenhuis did not let the coronavirus pandemic put a damper on his eighth-grade history students’ moment to shine.

Six of TeGrotenhuis’ pupils showed off their National History Day Contest presentations to the Sheldon School District Board of Education during its monthly meeting on April 14.

The regional level of the contest usually takes place at Northwestern College in Orange City; however, that could not happen this year due to the coronavirus pandemic. Instead, TeGrotenhuis gathered a panel of teachers in the Sheldon School District to evaluate his students’ work.

The students — Valerie Cook, Ella Holz, Conner Klein, Charlotte Kuiper, Douglas Nilles, Christian Richards and Alison Wolf — had the top six projects and gave brief overviews of them to the board members. The theme for the contest this year was “Communication in History: The Key to Understanding.”

Klein’s presentation was about significant instances of communication during World War II, starting with the United States’ entrance into the war following the bombing of Pearl Harbor in 1941.

He also spoke of mistakes that befell the U.S. forces on D-Day, such as air bombers missing almost all of their German targets and paratroopers getting blown off course after jumping from planes. It was up to the Allied ground troops to push through enemy defenses on the beaches of Normandy despite taking heavy casualties.

Klein also spoke of the United States’ decision to drop nuclear bombs on Hiroshima and Nagasaki as a final means of getting Japan to surrender.

“We dropped the Big Boy, which was the first bomb which wiped out most of Hiroshima. And once they wouldn’t surrender again, we hit Nagasaki with the Little Boy. That ultimately ended the war because of the casualties,” Klein said.

Holz and Kuiper partnered for their project, which also dealt with communication during World War II. The duo researched how the U.S. military employed the Navajo language to securely encrypt messages during the war using a code system.

The system allowed Navajo code talkers to translate three lines of English in about 20 seconds. The code also was used on the battlefield and never successfully deciphered by Axis forces. One of the most notable periods of fighting in which they code was used was the Battle of Iwo Jima Feb. 19-March 26, 1945.

“They transmitted 800 messages without any error in it,” Holz said.

Wolf’s project centered on the role of America’s first ladies and how the station has changed throughout history. She used the three examples of the original first lady, Martha Washington, as well as Dolley Madison and Michelle Obama.

Washington was noted for being a skilled hostess and a leader for children. Madison, meanwhile, is remembered for her role in removing artwork from the White House before the British burned the building during the War of 1812. During Obama’s years as first lady, she worked to improve nutrition in schools to reduce obesity.

Richards’ project explored the presidency of Ronald Reagan and effective ways he used communication when talking about his agenda — earning him the nickname as “The Great Communicator.”

Nilles researched the history of the Steiger Tractor Company, which was founded in the 1950s and helped innovate articulating four-wheel drive tractors.

“This was very interesting at the time, as most manufacturers were making smaller two-wheel drive models that didn’t really have that much power traction. Whereas these machines did, they were larger, more efficient,” Nilles said.

For her project, Cook traced the history and evolution of various popular music genres in the United States, such as country, pop, rock, jazz and hip-hop, as well as their cultural impacts.

“Popular music has grown so many ways to bring people together all over the world,” Cook said. “You can find someone on the other side of the world who listens to the same song. It just really gives people a way to connect.”

SHELDON—Leadership is a habit at Sheldon High School, or at least that’s what a group of students are trying to do.