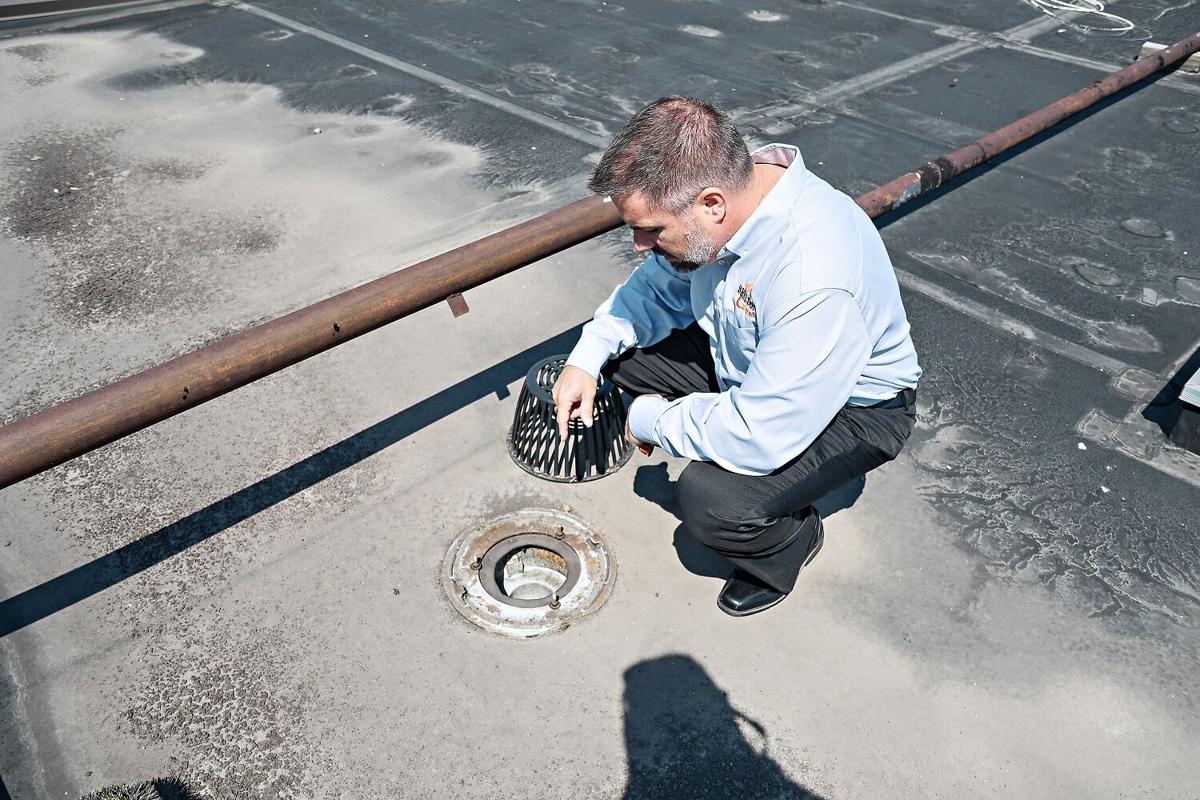 Sheldon superintendent Cory Myer points to the opening of a drain pipe on the high school roof. The district is looking into the possibility of installing a different drain lid attachment that would reduce the pressure of rain water in the pipe during heavy showers. 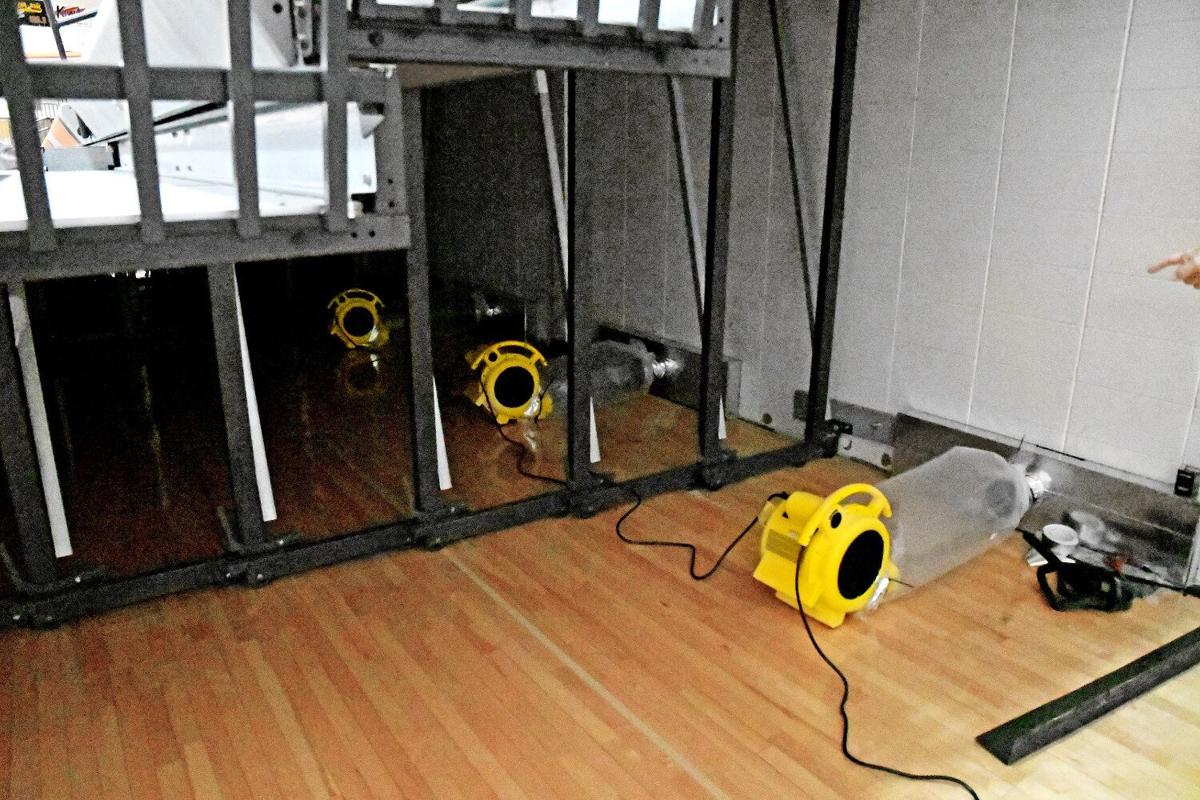 A trio of fans are hooked up to openings next to the wall that connect to the underside of the high school gym floor to help mitigate flooding damage last month.

SHELDON—The roof drain of the Sheldon High School can handle some rain — just not a lot in a short time period.

Superintendent Cory Myer relayed that information to the school district board of education Wednesday, Aug. 11, during its monthly meeting at the middle school.

Myer updated the organization on the status of the flooding damage the high school sustained last month from two separate downpours.

The district had an engineering company examine the existing drainage system on the roof, and the company found it was built to withstand about a half inch of rain per hour. However, if the engineer were to design a new roof for the building, it would be made so it could take a little more than 4 inches of rain per hour.

“The words they used were, ‘It is grossly undersized,’” Myer told the board.

Although the building has experienced flooding leaks in the past, Myer said the drain pipe has corroded through the years and the cap on it does not seal as tightly as it used to. In instances of heavy rain when water pools onto the roof, the pipe completely fills with water.

“That’s when it pressurizes the system. That only happens when you get a really heavy rain in a short amount of time. Otherwise, if it’s a light rain, no problems at all,” Myer said.

He said the simplest solution would be to replace the water drain lid on the roof with a different one that would restrict the amount of water that would flow down the pipe. That would in turn reduce the pressure on the drainage system to prevent future leaks.

Myer said the district was waiting to hear back from a structural engineer to find out if such an attachment could fit onto the pipe opening. He also did not yet know how much it would cost or if the roof could handle additional weight of more water pooling around the drain.

“The last guy we talked to thought that the roof could handle it, but we might just have to divert more of the water over the edge if the water flow gets higher, which we can do,” Myer said.

If a new system cannot be put in place, the other option would be to redo the aboveground piping and some of the piping below the building. Myer said that undertaking would be “a really big project” and hoped it was one the district would not have to do.

So far, Myer said two main issues with the gym floor damage — warping and smell — have not occurred as a result of the flooding. He noted the district’s director of buildings and grounds, Ryan Cannoy, set up an airflow system to mitigate the damage underneath the floor.

Board vice president Susan Rensink asked if the drain pipe was able to handle a rain shower Sheldon got earlier in the month. Myer said it was mostly OK other than a small amount of water that pooled at one spot in a hallway.

Myer also updated the school board on progress made on the new preschool building at the site of the former Fantasia Etc. and Autism Community Transition Center, located north of school property across Highway 18.

He said the demolition work at the building was almost completed, which consisted of taking down walls that were not needed for the future preschool. However, a couple walls were removed that should have remained standing for structural support.

Myer said there are three options on how to address the situation.

The first would be to set up three support columns in the affected classroom at no additional cost. The downside to that plan would be that a storage area above that space could not be used, which Myer said was supposed to be an asset to the building.

The second option would be to remove the storage area, rebuild it and put in headers instead of support columns. The only negative aspect to that option would be added cost to the project, although Myer did not know how much it would be.

The third option meanwhile would remove the storage area and rebuild it higher up, which also would increase the height of the ceiling. This option would also come with added cost.

The Sheldon School District Board of Education also took these actions during its meeting Wednesday, Aug. 11:

SHELDON—A gift from the Jack Duffy family in 2016 allowed Sheldon School District to host a literacy and learning conference.