SHELDON—The franchise agreement saga in Sheldon is not over yet.

Since January, the city of Sheldon and MidAmerican Energy Co. have been in serious discussions about entering a franchise agreement for electric and natural gas services.

Sheldon is the only MidAmerican city in Iowa without a franchise agreement.

The community has not had a franchise in place for gas and electric services since the 1980s; however, it does have a cable television franchise agreement in place with Premier Communications of Sioux Center.

When it met on Sept. 4, the Sheldon City Council approved gas and electric agreements with the utility, seemingly bringing an end to months of heated exchanges with constituents during public meetings about the proposal.

Most of the residents’ anger about the deal seemed directed at proposed franchise fees that were attached to the franchise agreement.

The money from the fees would have supported Sheldon’s four emergency service agencies; however, that stipulation was removed on Aug. 21 after months of negative feedback from some residents.

With the fees removed, city officials felt comfortable moving forward on the franchise agreement; however, on Thursday,  Sept. 12, a petition was turned in by residents asking for the franchise to be placed on the Nov. 5 ballot. 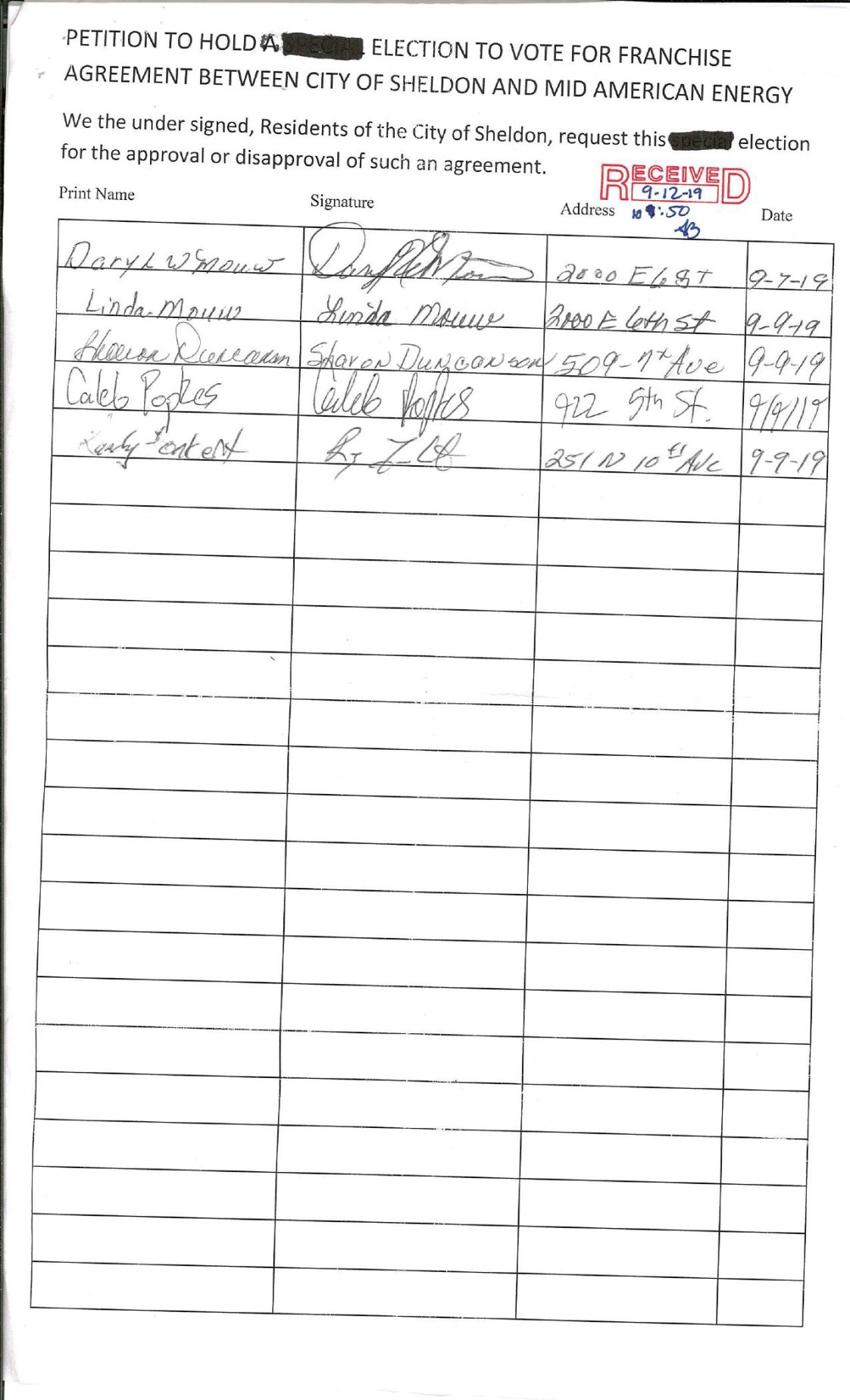 Sheldon resident Marv Van Riesen, who has been against the agreement since the initial public discussions, led the petition effort.

He was upset the council reneged on a promise to let citizens vote on the franchise agreement.

“They didn’t do it, so we thought we better exercise our right,” Van Riesen said.

“In all reality, we all realize there’s a real possibility that this thing could be turned into a referendum just like we had with the mayoral appointment,” Geels said at the time. “What if we be proactive and decide we are going to put it to a vote first? Get it out there, continue the discussion, not have a special election but put it on the ballot in November when we are having our general election and then that becomes our timetable.”

Sheldon residents triggered a special election earlier this year after longtime mayor Tricia Meendering resigned to become general manager of the city-owned Crossroads Pavilion event center and the council appointed Geels to fill her term, which expires on Dec. 31, 2021.

Geels won the special election in a landslide on May 21. He initially was sworn into office on April 15 after being appointed and sworn in again after winning the seat outright on June 5.

Because of his own experience, Geels, at the time, thought the franchise should go to a vote, which the council agreed to during the June 5 meeting.

When the council removed the fee portion of franchise ordinance on Aug. 21, city officials decided not to place the measure on the ballot.

While the council’s backtracking on voting was Van Riesen’s impetus for starting the petition, he has other objections to the franchise agreement.

His issues include that it gives MidAmerican eminent domain rights, the city waives right to a jury trial and that Sheldon does not receive anything directly from the utility in exchange.

MidAmerican franchise manager Mark Reinders, who previously noted he has worked on getting a franchise in Sheldon for a decade, said the utility is aware of the petition and is researching the validity of it.

“Obviously, we are disappointed that it’s gone that route,” he said.

Reinders noted the franchise agreement had unanimous support from the council and mayor Geels, who is a nonvoting member of the council, but spoke in favor of the deal.

The MidAmerican franchise manager previously noted Sheldon’s franchise agreement is for 15 years and Sheldon would have the ability to opt out at the five- and 10-year marks. MidAmerican typically offers 20-year agreements without exit clauses.

With the fee portions removed and universal support from the city’s elected officials, Reinders is surprised this issue is still lingering.

“We’re just confused as to why this part is so controversial,” he said.