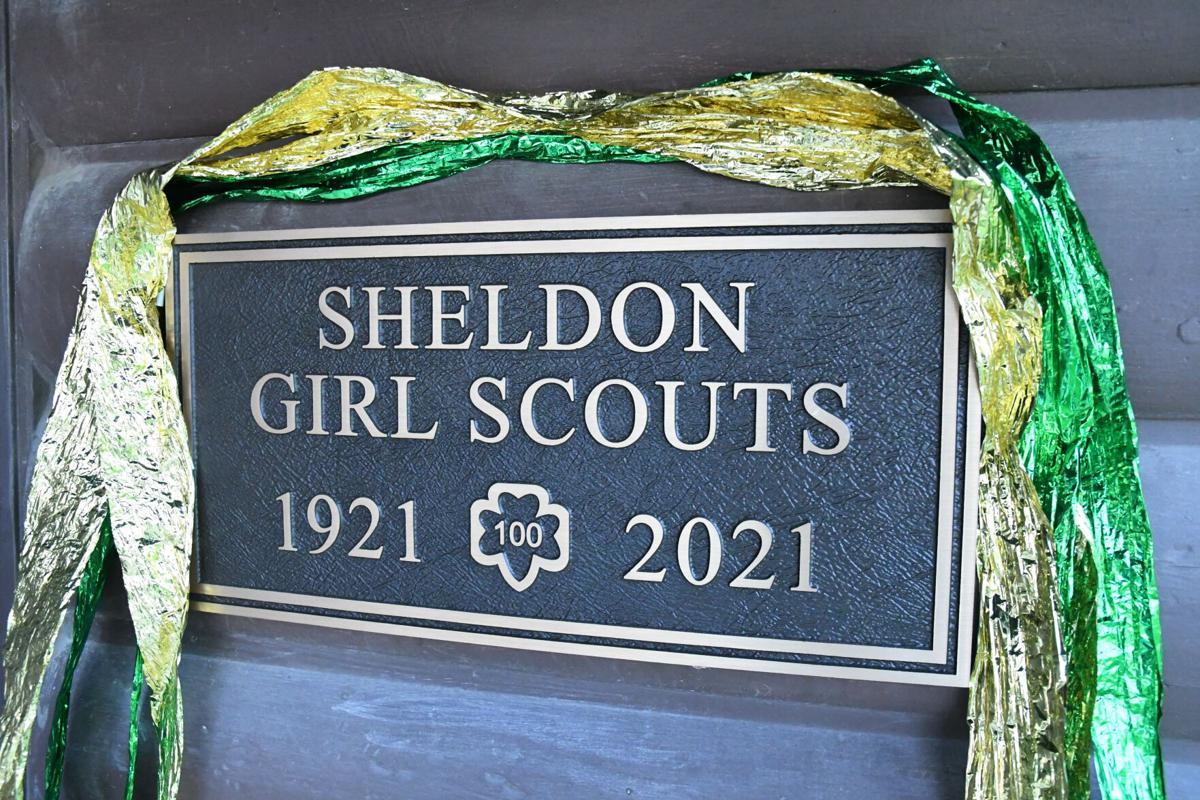 A new plaque marks the Scout House for the Sheldon Girl Scouts, who celebrated their 100th anniversary on Sept. 4. The building has been the local troop's home for 68 years and is located at City Park in Sheldon. 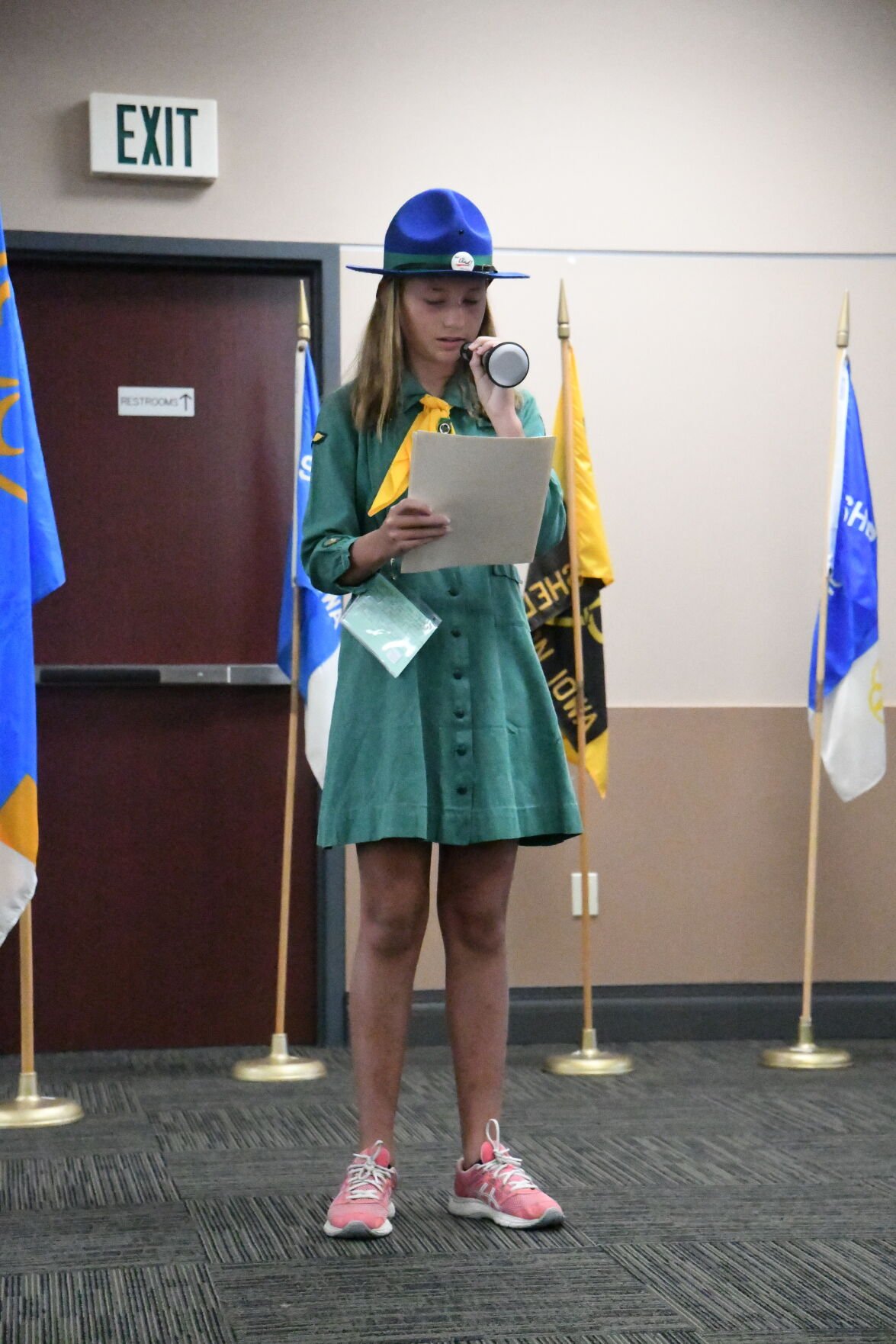 Cadette Theresa Nilles reads an early account of the founding of the Girls Scouts of the United States of America at the Sheldon troop's centennial ceremony on Sept. 4.

SHELDON—Girl Scouts made sure to “be prepared” for Sheldon troop's centennial celebration on Sept. 4.

The group’s 100-year get-together started at the Scout House with a welcome and tour. Located on the west side of City Park, the sturdy shack is shared by the Girl Scouts, the American Legion, the Veterans of Foreign Wars and other civic congregations.

“That building is 68 years old and we keep it pretty clean for the different groups that meet there,” said local leader Cindy Talsma.

After a brief dedication in the park, the celebration moved to the Sheldon Community Services Center. Talsma said the locale’s historicity was the reason it hosted the centennial. Before the permanent Scout House was built, most meetings were held in residential living rooms and basements, but the big annual events were held in the city hall.

“That’s why, to celebrate the hundredth in that building, has us go full circle,” Talsma said.

As service unit manager for troops in O’Brien County, Talsma has spent more than four decades shepherding the youth organization for girls 6-17, helping to lead their team building and practical skills as well as their charity efforts. She said the 100th anniversary was a decadeslong plan which included preserving the records of local Scouting.

The ceremony in the Sheldon Community Services Center in­­cluded a reading of Julia Lind, who chronicled the early days of Sheldon Girl Scouts. Scouting volunteer Karin Vanden Berg recited the original 1921 minutes, which Talsma noted for their grandiosity.

“People don’t talk like that anymore. ‘The following civic-minded citizens’ — you know?” she said of the formal language.

Keeping tradition alive while bettering the future is one of the chief goals for the Girl Scouts. Talsma said the story of the Sheldon troops tracks with the story of the national organization.

Because the city’s chapter got started in the early days of the Girl Scouts of the United States of America, the locals have been along for most of the ups and downs since the 1912 founding of the GSUSA in Georgia.

The Great Depression and World War II were early tests for troops in Sheldon and nationwide. Because of high prices and rationing, the Girl Scouts switched from selling cooking to calendars. They also raised money with rummage sales and anything else to make extra cents in frugal times.

That early era saw more than 150 Scouts in Sheldon alone, Talsma said, compared to the 40 members the group has this year.

She said the size of the group is less important than their mission, as stated in the Girl Scout Promise: To try to serve God and country, to help people at all times, and to live by Girl Scout Law. That law specifies various virtues to emblematize including honesty, fairness and respect.

“I still think we’re maintaining our membership the best that we can and, of course, a lot of that deals with the trends of today,” she said.

The history of the Girl Scouts also parallels social change in America. The organization born in the South began removing color barriers in its troops in the 1950s. Its efforts led Martin Luther King Jr. to famously remark that the GSUSA was a “force for desegregation.”

Talsma said making the right stands is not just good inside the Scout House, but out in the community, where Girl Scouts can be leaders.

“We have always been inclusive of all types of religions, cultures, all of that type of thing,” the longtime liaison said. “And yet, we have learned to work as a team and recognize individual differences.”

As for herself, she said it has been an honor to maintain Scouting in O’Brien County for so long. Being part of a “vast history,” as she called it, was something she repeatedly noted during the centennial ceremony.

“It definitely has been an adventure,” Talsma said.

Even with the heyday of Scouting gone, she said the group still has a place in Sheldon and elsewhere.

Talsma said she is excited to see new developments in technology and culture supplement Girl Scouts — especially as the organization becomes less central in American life — while keeping the core operation alive.

“I’m hoping that we will continue with our traditions of helping girls feel self-reliant and their ideas will continue on, especially community service, self-expression, things like that,” she said.

More than anything else that makes Girls Scouts special, she said, it is the lessons that the young women keep them for generations.

“It builds a strong sisterhood for them,” Talsma said. “This is where they have their sense of belonging, in this organization. With Girl Scouting, it becomes a way of life.”

Those interested in joining a Girl Scout troop in O’Brien County can search the national organization website at mygs.girlscouts.org or contact local leader Cindy Talsma at 712-348-1969.

SHELDON—Theresa Nilles is following in a family tradition.