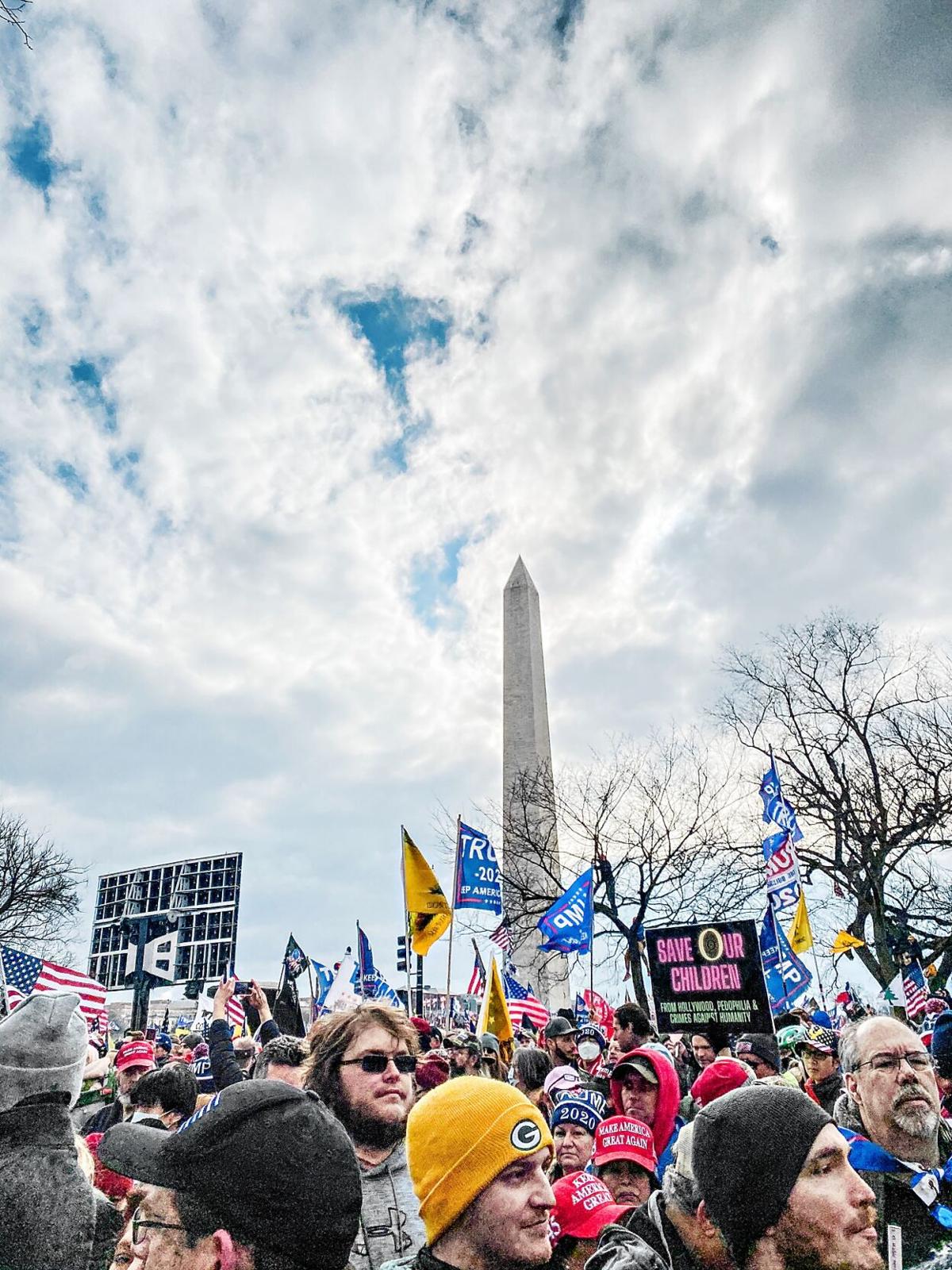 Supporters of President Donald Trump gather around the U.S. Capitol building on Wednesday, Jan. 6, holding up signs and flags while protesting the certification of Electoral College votes for President-elect Joe Biden. Sheldon residents Rian and Amy Vos attended the event and watched from afar as a group of protesters breached the Capitol and caused chaos. 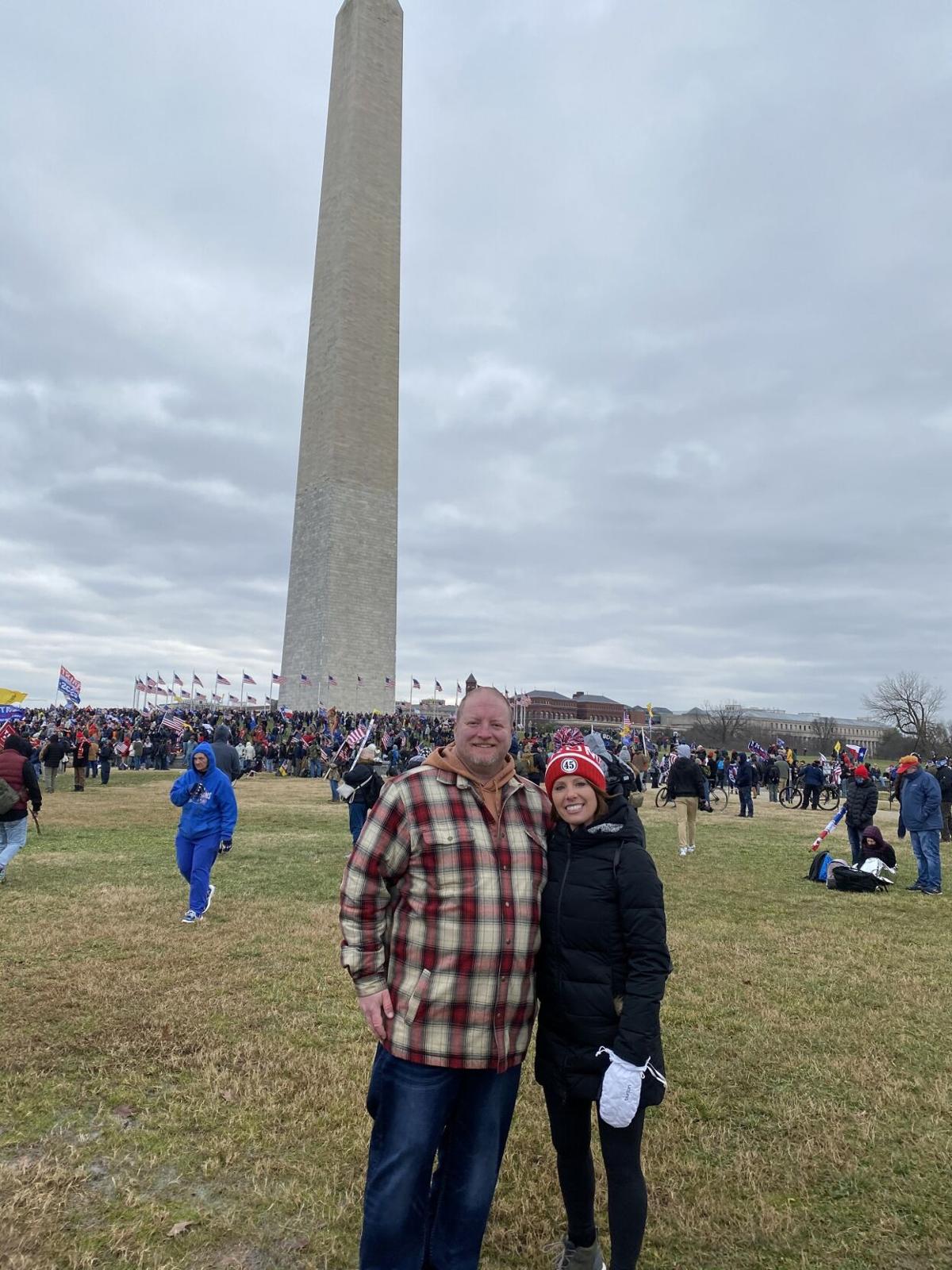 Sheldon residents Rian and Amy Vos pose for a photo in front of the Washington Monument at the National Mall Wednesday, Jan. 6, while attending a protest in support of President Donald Trump. 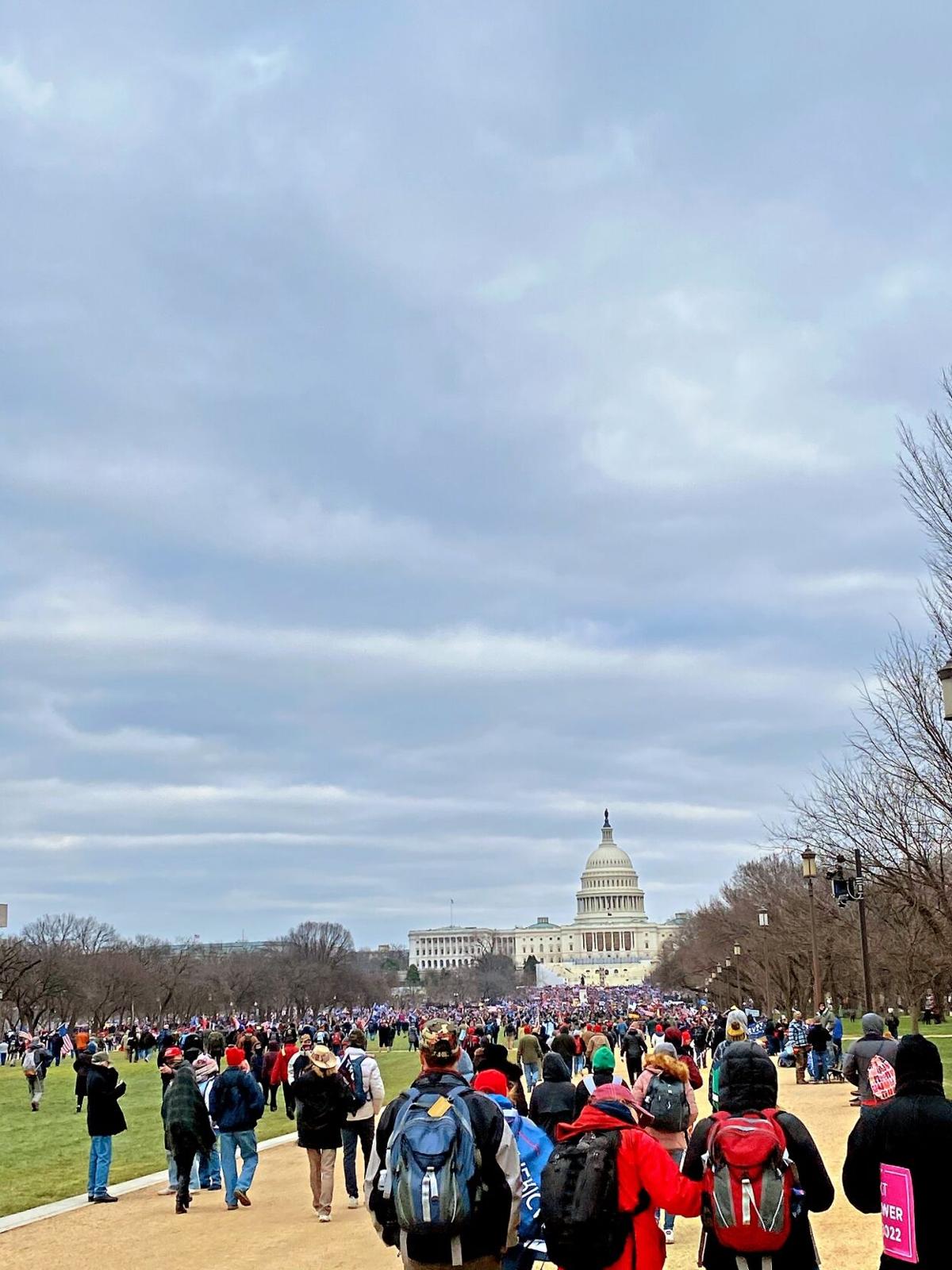 WASHINGTON, D.C.—Rian and Amy Vos of Sheldon wanted to see history happen Wednesday, Jan. 6, on Capitol Hill as the U.S. Congress met in a joint session to certify Electoral College votes from the November election.

However, the proceedings were cut short when supporters of President Donald Trump breached the building, causing chaos inside by smashing windows and occupying lawmakers’ offices and the congressional chambers.

Lawmakers had to temporarily evacuate to safety. Law enforcement officials were able to secure the building that evening, but at least one person was reported to have died from a gunshot wound amid the clash between the intruders and police forces inside.

The Voses stayed well away from the building and instead protested the vote certification along with a large crowd of Trump supporters on the west side of the Capitol.

“We came out on a whim. My wife and I were sitting at our house on Sunday, and she’s like, ‘Man, I’d really like to go out there,’” Rian said.

They arrived Tuesday afternoon, Jan. 5, and attended a rally the following morning on the south lawn of the White House, where Trump and others spoke.

During that speech, the president repeated claims he previously made that the November election was “stolen” from him by Democrats and the media. He also said he would “never concede.”

Rian said the atmosphere before, during and shortly after Trump’s speech was peaceful. He and Amy later followed the crowd of Trump supporters to the Capitol building to protest the vote certification. Rian noted the loud cheers the crowd made for the president at the time.

“It sounded pretty much like an NFL stadium if you were standing out tailgating and everybody was in the stadium,” he said.

When they arrived at the Capitol in the early afternoon, Rian noted the atmosphere was still mild. He recalled that it was after Sen. Ted Cruz (R-Texas) objected to the Electoral College votes from Arizona on the floor of the Senate that the mood changed.

From their position on the west side of the Capitol about a quarter-mile away from the building entrance, Rian and Amy could see the initial protester who broke through to the building. A wave of a few hundred people followed.

“We were a pretty far piece away from the Capitol, but we could see,” Rian said. “It was absolute chaos. It was chaos up there.”

He noted the “chaos” he witnessed was confined to the Capitol building, not in the area outside it where he was. He said he couldn’t speak for what the crowd outside the building on the east side was like, since he couldn’t see what was happening there.

President-elect Joe Biden condemned the events at the Capitol, calling them, “an unprecedented assault, unlike anything we’ve seen in modern times,” in a speech the afternoon of Jan. 6.

“The scenes of chaos at the Capitol do not reflect a true America, do not represent who we are,” Biden said. “What we’re seeing are a small number of extremists dedicated to lawlessness. This is not dissent; it’s disorder, it’s chaos, it borders on sedition and it must end now.”

Biden also referenced Trump’s comments regarding election fraud and urged the president to demand an end to “the siege.”

The events at the Capitol also drew unanimous condemnation from newly-elected U.S. Rep. Randy Feenstra of Hull and U.S. Sens. Chuck Grassley and Joni Ernst, all Republicans from Iowa.

The lawmakers were all present at the Capitol for the vote certification and joined their colleagues in evacuating to safety in the afternoon.

Feenstra, who represents Iowa’s 4th Congressional District and was sworn into office Sunday, Jan. 3, called Jan. 6 “a sad day in our nation’s history.”

He also said that although Americans have the right to free speech, violence isn’t the answer.

“A woman died during the events that unfolded. Our beautiful Capitol — a symbol of our Republic — was desecrated in front of the world. Frustrations over the results of the election are understandable, but resorting to violence and anarchy is completely unacceptable,” Feenstra said in a statement released late Jan. 6.

Through a follow-up e-mail response to The REVIEW received Friday, Jan. 8, Feenstra spoke of what was running through his mind while evacuating the building.

“I was praying that all of my colleagues made it to a safe location — and thanks to our outstanding men and women in blue, all of them did. I was also deeply saddened by what I was watching," Feenstra said.

Grassley called the attacks on the Capitol, “an attack on American democracy itself” in a statement released the same day.

“This was not a demonstration of any of our protected, inalienable rights. These were un-American acts worthy only of condemnation. Those who plowed over police barricades, ignored law enforcement or desecrated our monument to representative democracy flouted the rule of law and disgraced our nation,” Grassley said.

He also said the perpetrators deserved to be prosecuted as far as the law would allow.

Ernst also called for legal action against the people who invaded the Capitol in her own statement. She referenced her military experience and said the rioters betrayed the ideals she fought to protect.

“America — we cannot stand for this. For years, we have been able to disagree and debate tough issues and always strive to be a more perfect union. We have had a peaceful transfer of power from one administration to another throughout the course of our history, and it’s paramount we do that once again,” Ernst said.

She acknowledged frustrations some Iowan voters have regarding the outcome of the election but said it’s not her job as a senator to overturn the will of the voters to choose who wins an election.

Rian spoke of the belief among some Trump supporters that the election was fraudulent and noted the partisan divide that contributes to how a voter might view the election.

“If it’s a fraudulent election, which for people that vote for Trump, we see it as being a fraudulent election. There’s conspiracy theory after conspiracy theory, votes change, this and that. All the early voting, all the write-in ballots, all of that stuff leads you to believe that — if you’re a Trump supporter — that it was fraudulent,” Rian said. “If you’re a Democrat, hey, it was a free and fair election.”

Conspiracy theories regarding widespread voting fraud in the election have been repeatedly debunked.

Rian also mentioned rumors he and Amy had heard that the Capitol protest in support of Trump would be infiltrated by members of “antifa,” a broad term short for anti-fascist activists who oppose neo-Nazis and white supremacists at demonstrations and other events.

Rian said it was too early to tell if such rumors were true.

“I would love to blame it on antifa, but I just can’t,” he said. “There are some Trump people out there that are pissed off too. So I’m just waiting for people to sort it out. It’s going to be too late to really matter.”

As of today (Saturday, Jan. 9), no evidence had emerged showing antifa involvement at the Capitol.

REGIONAL—Support for President Donald Trump was strong in N'West Iowa on Election Day, but the incumbent Republican did not get enough elector…