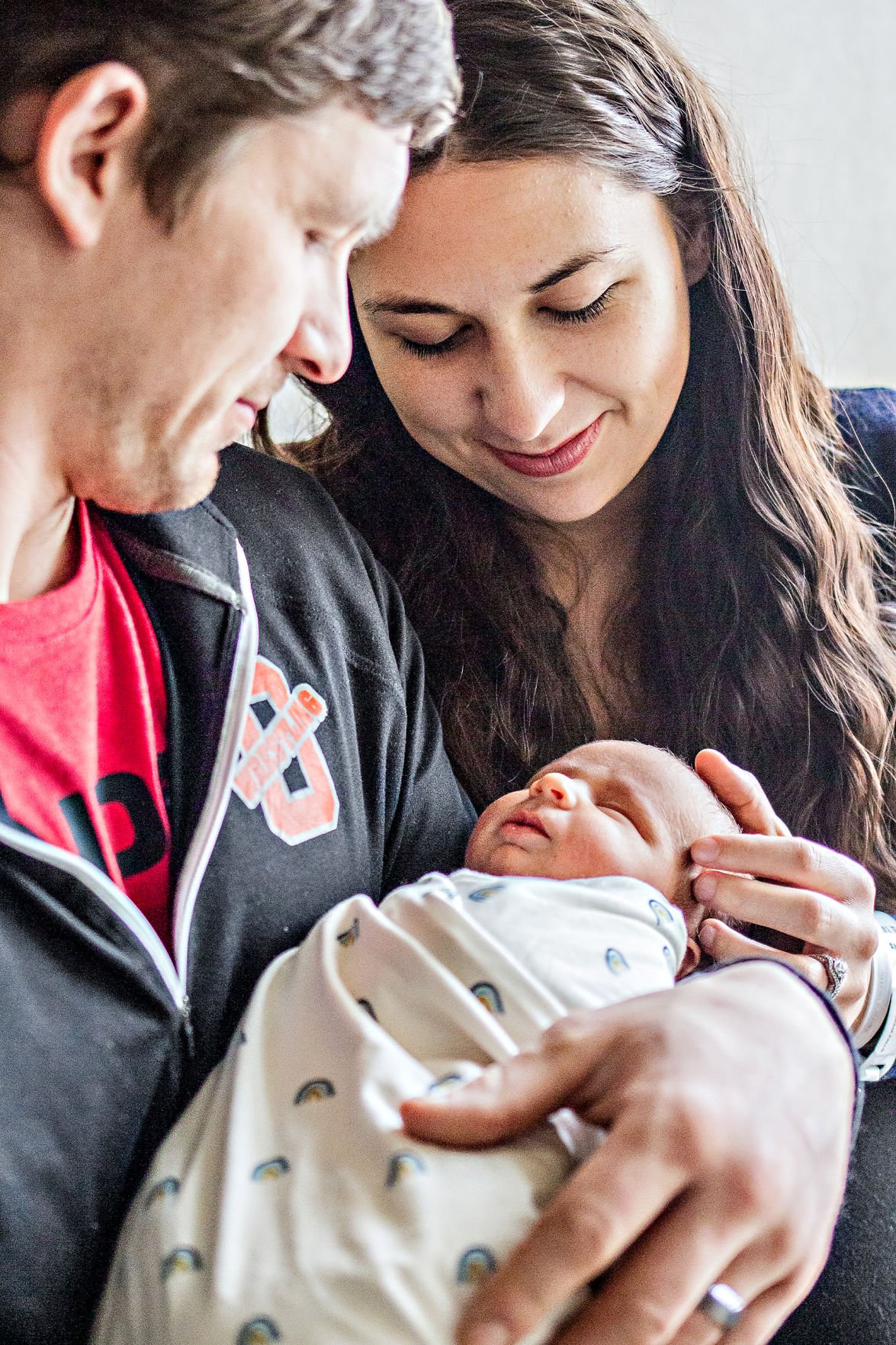 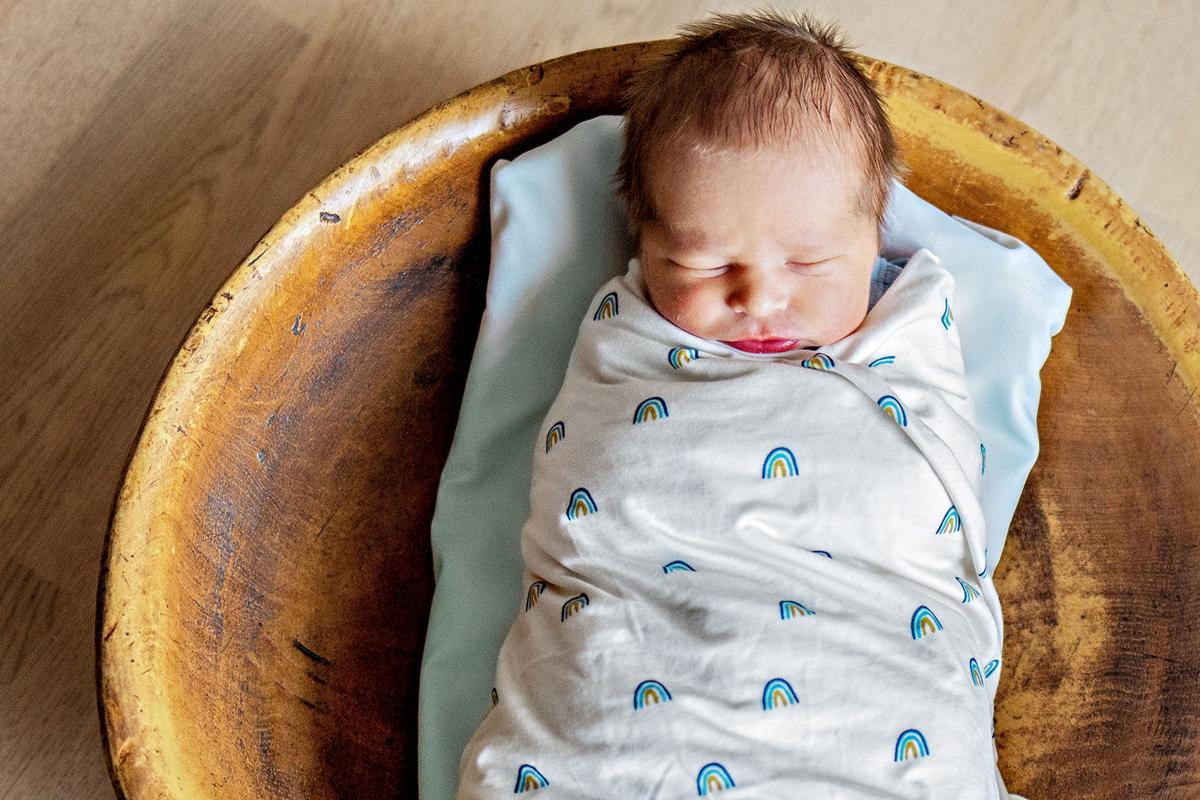 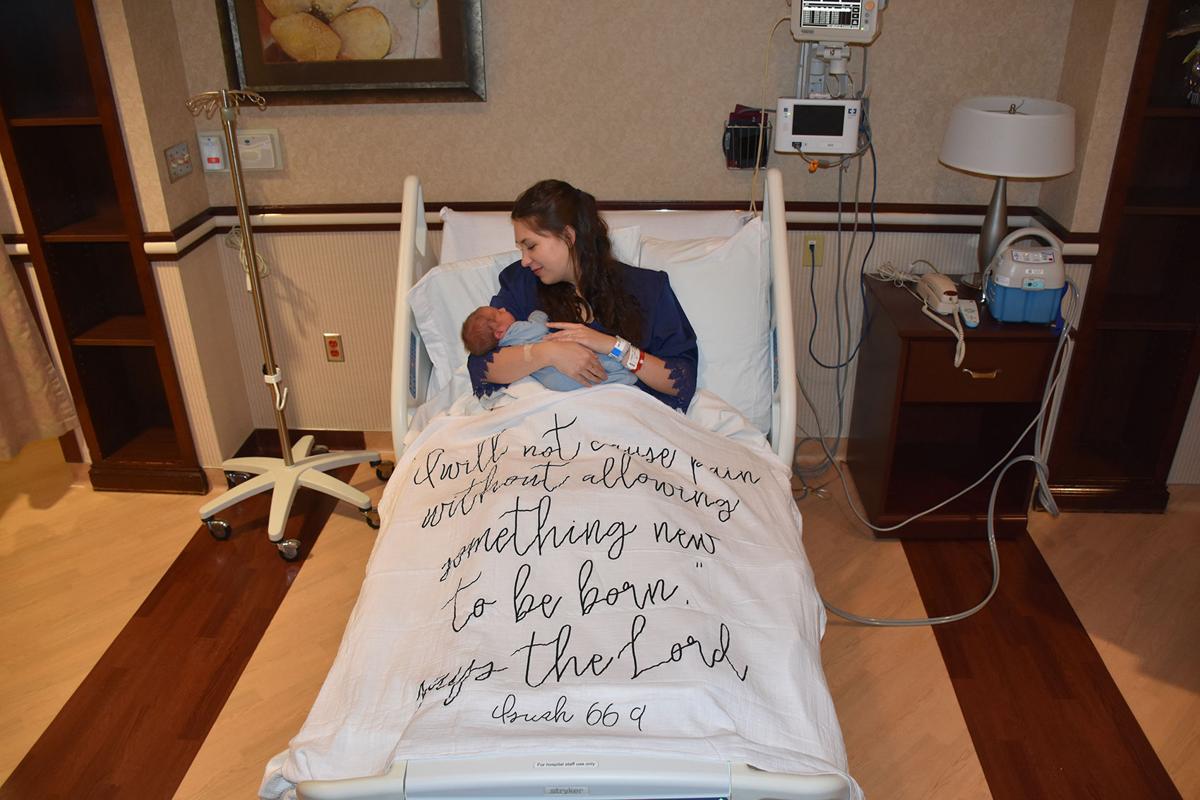 Emily Ney of Sheldon holds Isaiah Gerald Allen Ney, who was born at 7:30 a.m. Jan. 20 at Sanford USD Medical Center in Sioux Falls, SD. The Book of Isaiah verse on the blanket inspired his first name. 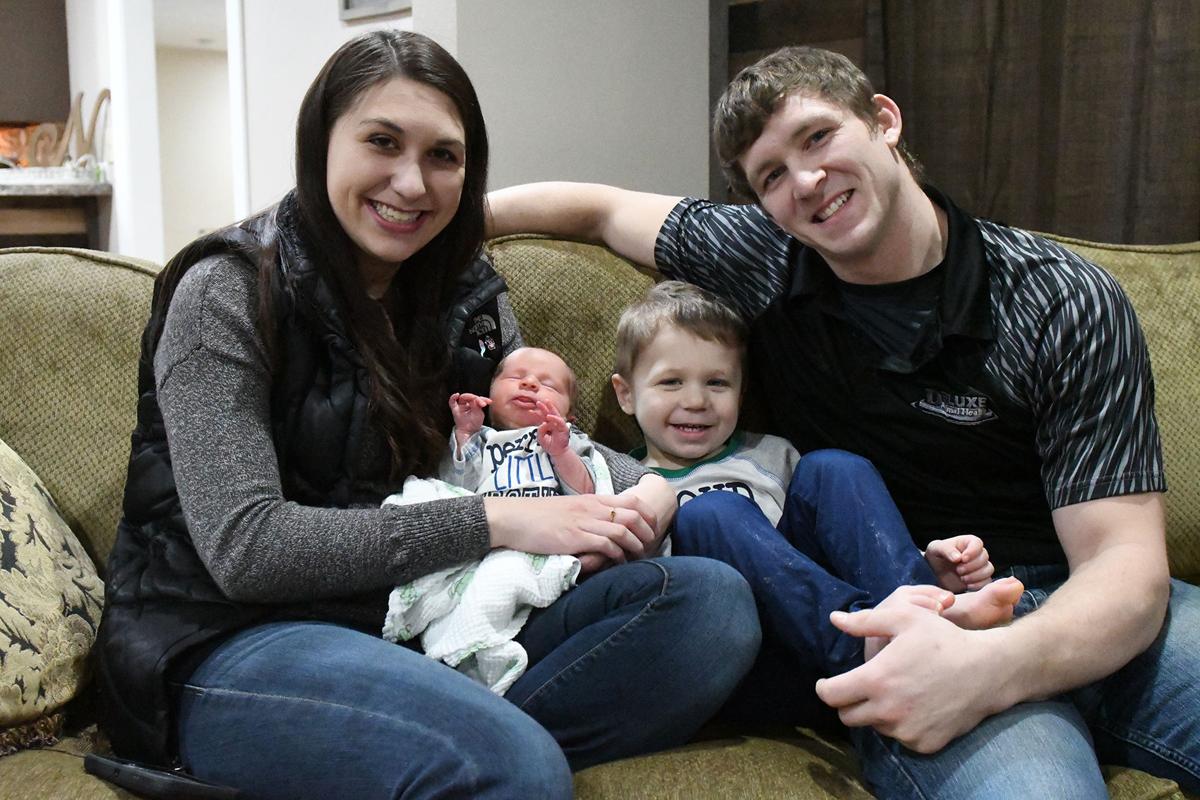 Emily Ney of Sheldon holds Isaiah Gerald Allen Ney, who was born at 7:30 a.m. Jan. 20 at Sanford USD Medical Center in Sioux Falls, SD. The Book of Isaiah verse on the blanket inspired his first name.

SHELDON—After enduring the darkest storm any parents could ever face, Scott and Emily Ney find themselves with a rainbow baby who brightens their lives.

The Sheldon couple welcomed Isaiah Gerald Allen Ney into the world at 7:30 a.m. Jan. 20 at Sanford USD Medical Center in Sioux Falls, SD. He had been due Feb. 8.

Isaiah — who weighed in at 6 pounds, 13 ounces, and measured 20 inches long — joins 3-year-old brother Matthias and 2-year-old Tucker, a black Labrador, at home.

Having a child is a meaningful milestone for any parents, but for Scott and Emily, their baby boy is especially significant.

The Neys lost their daughter, Rowyn Ann, on Nov. 22, 2018, at 34 weeks and one day old when she suffered an umbilical cord accident that took her life while she still was inside Emily’s womb.

Isaiah is a rainbow baby, which is a baby born to a couple who have gone through a previous loss during a pregnancy.

“Wonderful; a relief,” Scott said. “From my point of view, going through and losing Rowyn, and then getting ready to have him, the emotions coming up to 34 weeks were pretty strong.

“Tensions were pretty high because at 34 weeks, we lost Rowyn,” he said. “Then we got past that. Now we’re going in and now we’re going to have this baby. It just makes you nervous with all the stuff that can happen.”

Emily was induced at 8:30 p.m. Jan. 19 and gave birth to Isaiah 11 hours later at Sanford USD Medical Center, the same hospital where Rowyn was born.

“It was a very different experience being there,” Emily said. “It was a much happier one this time. We were able to walk to try to keep the labor moving along.

She grew emotional as she talked about her various pregnancies.

“We found out that we were expecting Rowyn on April 23, 2018,” Emily said. “Obviously, we were able to have her for a very short time, but it’s not what any parent wishes for or wants.

“We dealt with all the emotions of losing a child,” she said. “Then we found out we’re expecting and then we had another miscarriage.”

However, the Neys found out they were expecting again on June 1 — Emily was four weeks along.

“That was just solely a God thing because we were very adamant that we were just going to take a break,” Emily said. “It was too hard emotionally. It was too hard physically.

“I found out right around four weeks with each pregnancy because I could al­­ways tell,” she said. “My body feels different when I’m pregnant. So I took a test and then three more and they were all positive.”

The couple went to Orange City Area Health System for an ultrasound to make sure things were OK with Emily’s pregnancy.

“We discovered I had a subchorionic hemorrhage, which is basically a pool of blood on the outside of the gestational sac,” Emily said. “It was small.

“Normally, they dissipate and they just go away on their own,” she said. “However, because of losing Rowyn and everything, they sent us up to Sioux Falls.”

Scott and Emily traveled to Sanford USD Medical Center for weekly ultrasounds to keep track of the hemorrhage.

“The hemorrhage grew and grew and eventually it encased the whole gestational sac,” Emily said. “The fear in that is the blood pool gets so heavy it’ll pull the gestational sac away from the uterus and you’ll miscarry.”

The hemorrhage went away by the time she was 16 weeks along in her pregnancy.

“Eventually, when we got to about 12 weeks, our doctor said, ‘You know, this is really just in God’s hands. We can’t do anything more at this point. It’s kind of a 50-50 chance on if you’ll get to keep this baby or not,’” Emily said.

“We really, really, really wanted to keep this baby after everything,” she said. “That’s why I feel like he’s such a blessing because statistically things weren’t looking great for us for a long time.”

Once the Neys cleared that hurdle, another one nearly got in the way.

“We found out that my amniotic fluid level was high,” Emily said. “It was in the mild to moderate range.

“Like where I was, it was still safe, but if it gets really high, it can lead to a lot of problems, including stillbirth,” she said.

That made Scott and Emily nervous because of what they had experienced before with her pregnancies.

Because of Emily’s high amniotic fluid levels, Isaiah was able to move around more in her uterus.

“That also made me nervous because Rowyn got tangled up,” Emily said. “I didn’t want him to get tangled up because he kept moving.

“That also explained why I felt less movement with him,” she said. “There was so much more fluid impacting that I couldn’t feel him as much.”

She also went through preterm labor — which occurs when regular contractions result in the opening of a woman’s cervix after week 20 and before week 37 of pregnancy, according to the Mayo Clinic — at 32 and 34 weeks.

“I had a couple bouts where my contractions were two to three minutes apart with pain, but my water wasn’t broken,” Emily said.

“I had to go to the hospital and I had to track it,” she said. “Then I got fluids and I got a shot to stop the contractions.”

‘It all worked out’

Scott and Emily were not going to give up their baby without a battle.

“I felt like this whole pregnancy we were just fighting to keep him,” Emily said. “We were praying to keep him. We were doing everything we could to just get him here as safely as we could.

“It all worked out,” she said. “I just didn’t want anything to go wrong. By the grace of God, we got to keep him. He is just a dream.”

Emily explained why she and Scott chose the name Isaiah for their second son.

“Right after I lost Rowyn, I had a friend send me a Bible verse,” Emily said. “This verse said, ‘I will not cause pain without allowing something new to be born,’ from the Book of Isaiah.”

The Neys have a blanket that has the Bible verse em­­broidered into it.

“I promised God in December of 2018 that if He would send me a baby boy and let me keep him, that I would name him Isaiah and we would do our very best with him,” Emily said.

She actually prayed for a baby in general, but she definitely felt like her and Scott’s next baby would be a boy.

“My heart was so ready for another boy,” Emily said. “A girl would have been great, too, but right when I took the pregnancy tests, I knew our baby was a boy named Isaiah.”

She said Matthias has been a “great big brother” to Isaiah.

“Very caring,” Emily said. “Very concerned about the baby. He thinks he should have snacks from the cupboard.

“He’s always willing to bring him a pacifier or anything he thinks he needs, whether he needs it or not,” she said. “He’s very giving.”

The Neys have received a lot of support from their family members, friends and community, including their co-workers.

Scott is a delivery driver for Deluxe Animal Health in Sheldon and the former Emily Jansen is a first-grade teacher at East Elementary in Sheldon.

“I cannot ask for a more supportive boss or more loving co-workers,” Emily said. “They’ve been so willing to help out and do whatever if I needed anything.

“They were very cautious about my pregnancy, which was just so sweet,” she said. “They’ve just been excited for him since day one. We’ve got a great community here in Sheldon.”

Scott and Emily, who are Sheldon natives, feel blessed to have Matthias and Isaiah to brighten their lives and will always remember the babies they have lost.

“We’re so thankful,” Emily said. “We’re very happy. We love kids. We’ll take as many as God’ll let us have.

“We love being parents,” she said. “We’ve always wanted to be parents. We always dreamed of having a family together.”

SHELDON—Scott and Emily Ney have always wanted to have children.