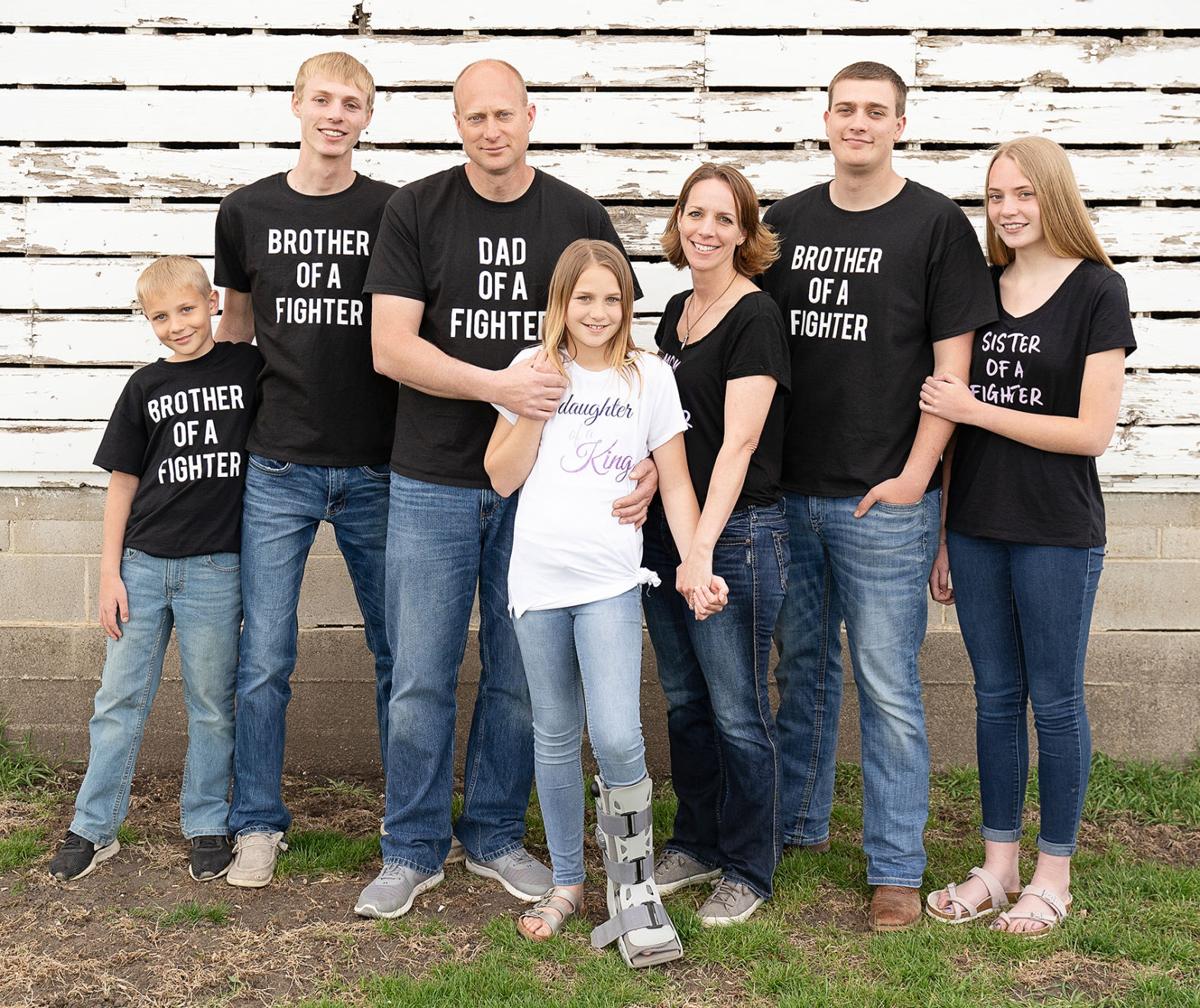 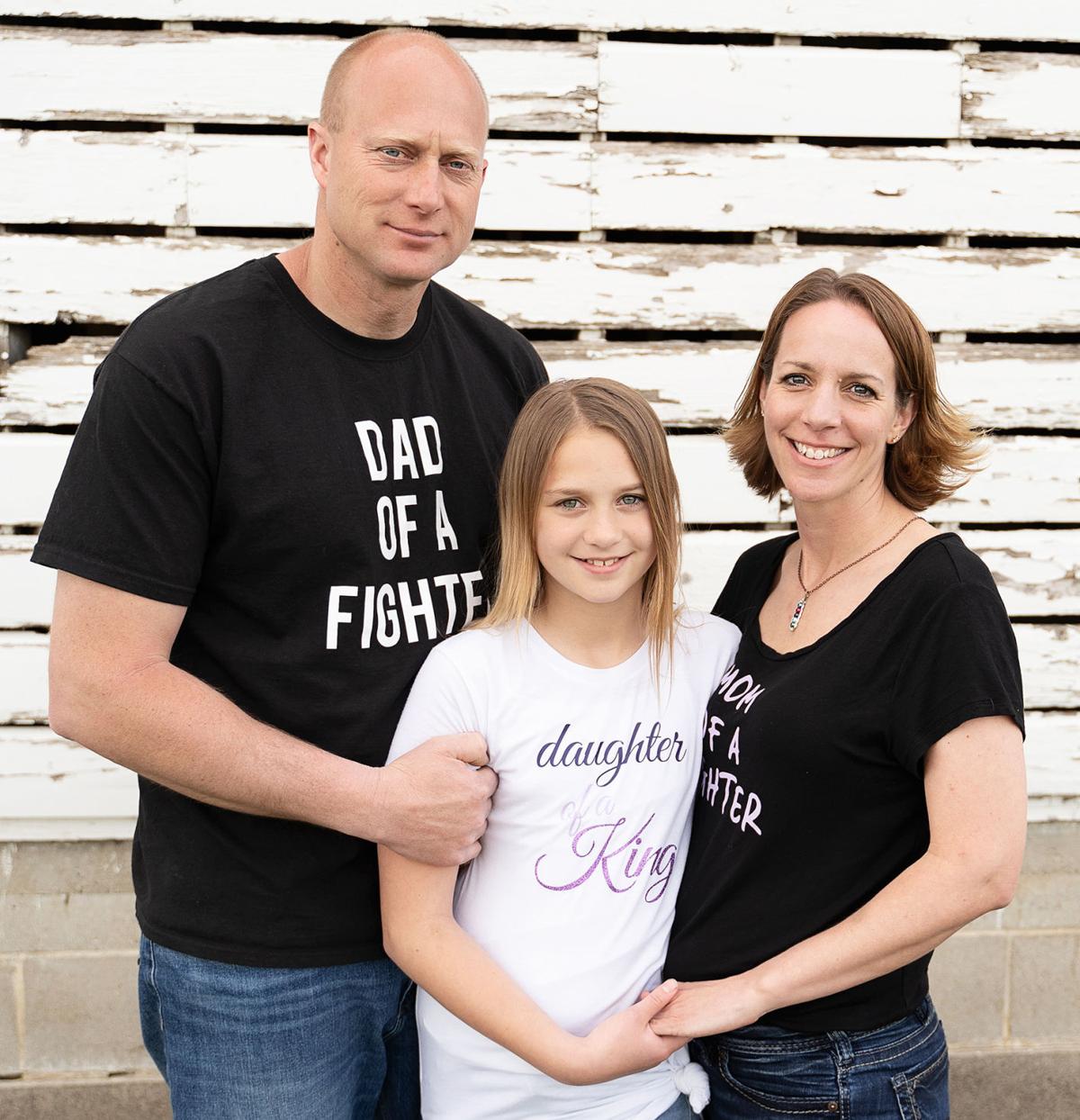 Jerry and Sara Hofman of rural Primghar are part of a steadfast support system for their daughter Jewel, who has a rare bone cancer. 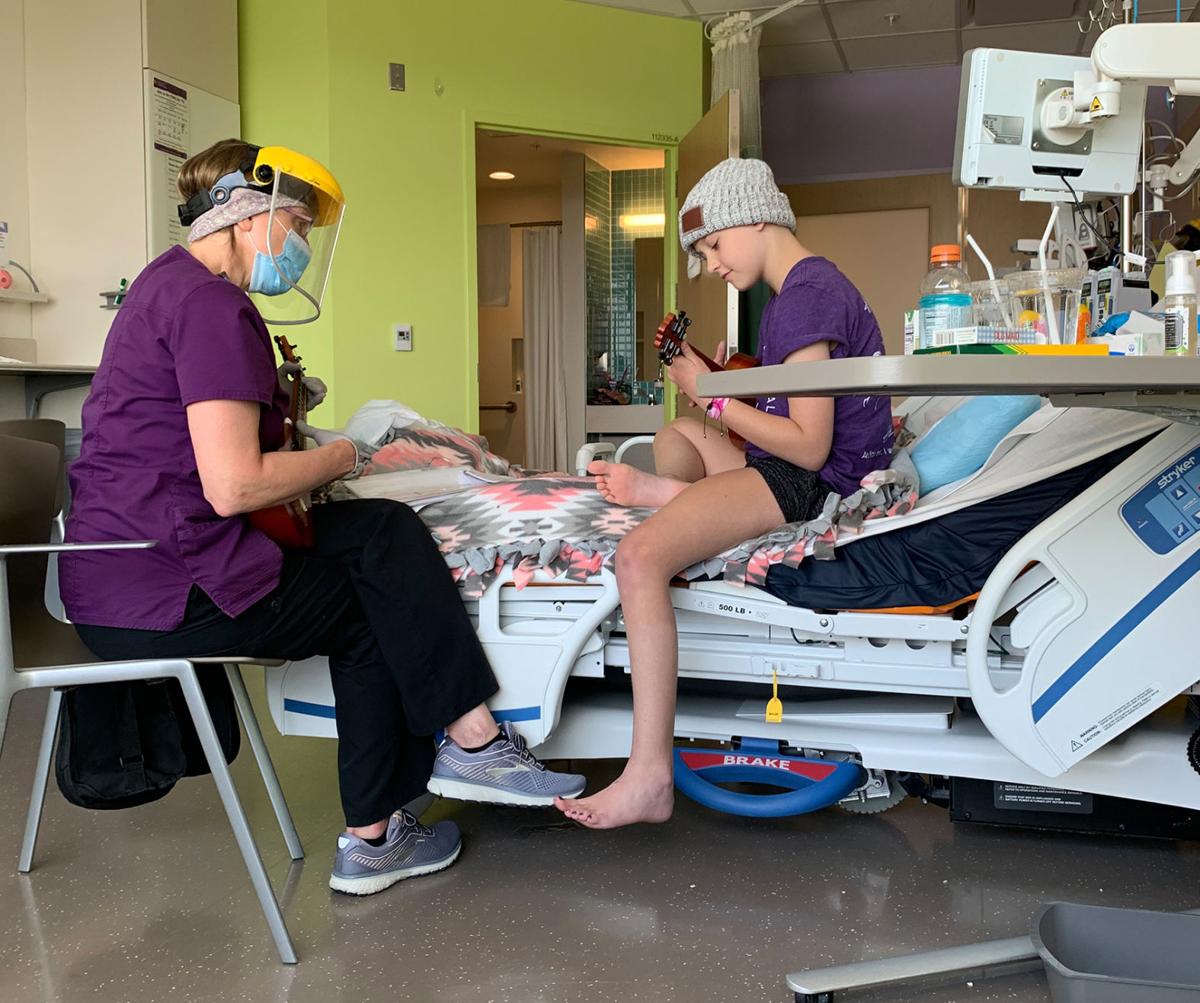 Jewel Hofman of rural Primghar practices with a ukulele during a music therapy session in Iowa City, where she has been undergoing chemotherapy treatments for cancer.

Jerry and Sara Hofman of rural Primghar are part of a steadfast support system for their daughter Jewel, who has a rare bone cancer.

Jewel Hofman of rural Primghar practices with a ukulele during a music therapy session in Iowa City, where she has been undergoing chemotherapy treatments for cancer.

PRIMGHAR—If Jerry and Sara Hofman could heal their daughter Jewel, they would.

The 10-year-old rural Primghar girl has telangiectatic osteosarcoma, a rare form of bone cancer. That diagnosis will lead to Jewel having her left leg amputated below the knee at the end of July at the University of Iowa Stead Family Children’s Hospital in Iowa City.

“We serve a great God that can do great things. We are praying for a miracle for Jewel if it is God’s will.

“We know Jewel will be healed,” she said. “What we don’t know is if her healing will be an earthly healing or a heavenly healing. But we have hope. Psalm 71:14a: ‘As for me, I will always have hope.’”

Sara noted Jewel has a difficult time talking about her cancer diagnosis.

“Every day for Jewel is a different roller coaster of physical and emotional feelings,” Sara said. “The whole diagnosis of cancer has been very trying on her emotionally.”

In late June 2019, Sara took Jewel to see a doctor because she was dealing with a lot of pain and swelling in her left ankle.

During that appointment, Jewel had X-rays done and a fracture was found in her lower left leg due to what was thought to be a bone cyst.

“She was put in a boot and we left for our family vacation over the Fourth of July,” Sara said. “As soon as we got home from our family vacation, Jewel had an MRI and it was discovered that she had an aneurysmal bone cyst, which caused the fracture in her leg.”

‘Very hard on her’

Jewel underwent surgery in July 2019 in Sioux Falls, SD, to have the aneurysmal bone cyst — also known as an ABC — removed from the tibia in her left leg.

The tibia, the larger of the two lower-leg bones in a person’s body, is the bone that forms the shin.

Jewel had X-rays done in October and they showed the aneurysmal bone cyst had returned in the same spot in her lower left leg. In January she was referred to Iowa City.

The week before what was going to be her second surgery in March in Iowa City, Jewel was dealing with pain again in the same spot.

“They did more X-rays and another MRI,” Sara said. “Once again, those showed that the ABC had returned, changed and aggressively gone to where she had only a small sliver of bone left in her lower tibia.”

Jewel underwent another surgery in March in Sioux Falls.

“They used cadaver bone struts and bone grafting where the cyst had destroyed the bone,” Sara said.

The Hofman family received a phone call on April 19 from Jewel’s orthopedic doctor in Sioux Falls about her pathology reports from her March surgery.

The reports had been analyzed at the Mayo Clinic in Rochester, MN, and showed Jewel has telangiectatic osteosarcoma.

That led to Jewel’s return to Iowa City.

“Her cancer started in her left lower tibia bone,” Sara said. “Her scans that were done on April 23 in Iowa City show that Jewel has a small spot in her lung that they also suspect is cancerous.”

Jewel has had four rounds of chemotherapy since April 30 and she has lost her hair in the process. Her next round is scheduled for Thursday, July 2.

“The chemo has been very hard on her body,” Sara said.

Jewel is scheduled to receive 18 rounds of chemotherapy in Iowa City.

‘Too much of a risk’

The Hofmans live on a farm located about halfway between Primghar and Sanborn.

“My husband does the cattle chores and the crop farming and I do the nursery pig chores, so that makes traveling to Iowa City and being gone that much harder,” Sara said.

Due to the coronavirus pandemic, only Jewel’s father or mother are able to be with her while she undergoes chemotherapy.

“Jerry and I were able to go to Jewel’s first chemo treatment together because we had to take classes on how to care for Jewel,” she said. “Now we take turns staying with Jewel.”

“She does not get to hang out with people outside of her immediate family as it is too much of a risk due to COVID and any other germs that she may get,” she said.

‘A whole lot of love’

Jewel’s favorite activities are hanging out with her friends, doing tumbling and gymnastics, swimming and riding a four-wheeler.

“She has been unable to do tumbling/gymnastics for a year now and she is unable to see her friends right now, which is really hard on her,” Sara said. “She is still able to swim in our aboveground pool on our yard when she is feeling up to it and ride the four-wheeler.”

Jewel, who will be a fifth-grader this fall at Sanborn Christian School, and her family were nominated by Josh and Glenda Krikke of Sanborn as the 189th family to be supported by the Spencer-based Shayla Bee Fund.

“We met at Miller Park in Sanborn on May 15 and were met with a whole lot of love from the community lining the streets and wearing purple shirts — Jewel’s favorite color — to show their love and support for her,” Sara said.

The Hofman family has been shown a tremendous amount of support from relatives, friends and others.

“We would like to thank everyone for their love, support and prayers during this difficult journey that we are on,” Sara said. “We know that God has a plan and that Jewel’s life is in His hands.”

She noted people cannot truly understand the journey of a child who has been diagnosed with cancer and his or her family until they are on that journey themselves.

“This diagnosis has changed our lives as a family,” Sara said. “We have a very long, tough road ahead of us yet, especially with her upcoming surgery and adjusting to a new way of life for Jewel as an amputee and us as family members as we care for her.”

She again expressed her gratitude for all of the support Jewel and her family have received.

“We are so thankful for the strangers that have now be­­come our friends who have traveled a similar road of pediatric cancer and who truly understand everything we are going through,” Sara said.

“We are also so very thankful for our family, friends and strangers in the community who have not traveled the road of pediatric cancer that are still walking beside us in prayer,” she said.

“I keep reminding myself and Jewel that God has a plan and this is part of the story that He has written for our lives,” she said. “God is still good and God is always faithful. He will never leave us and will continue to carry us through this trial in our lives.”

Visit Jewel Hofman’s page at CaringBridge.org by searching for her name or website name, which is teamjeweljade. Jade is Jewel’s middle name.

Jewel’s mother, Sara Hofman, is requesting help from the public to connect with other families in which someone has telangiectatic osteosarcoma, the same rare form of bone cancer Jewel has.

“Since telangiectatic osteosarcoma is so extremely rare, I am having a hard time connecting with anyone with this exact subtype of osteosarcoma,” Sara said. “I have yet to find another case/person with TO.

“If there is anyone that reads this article that knows of someone that has/had TO, please have them reach out to me,” she said. “I would love to connect with them and hear their story and learn more about TO.”