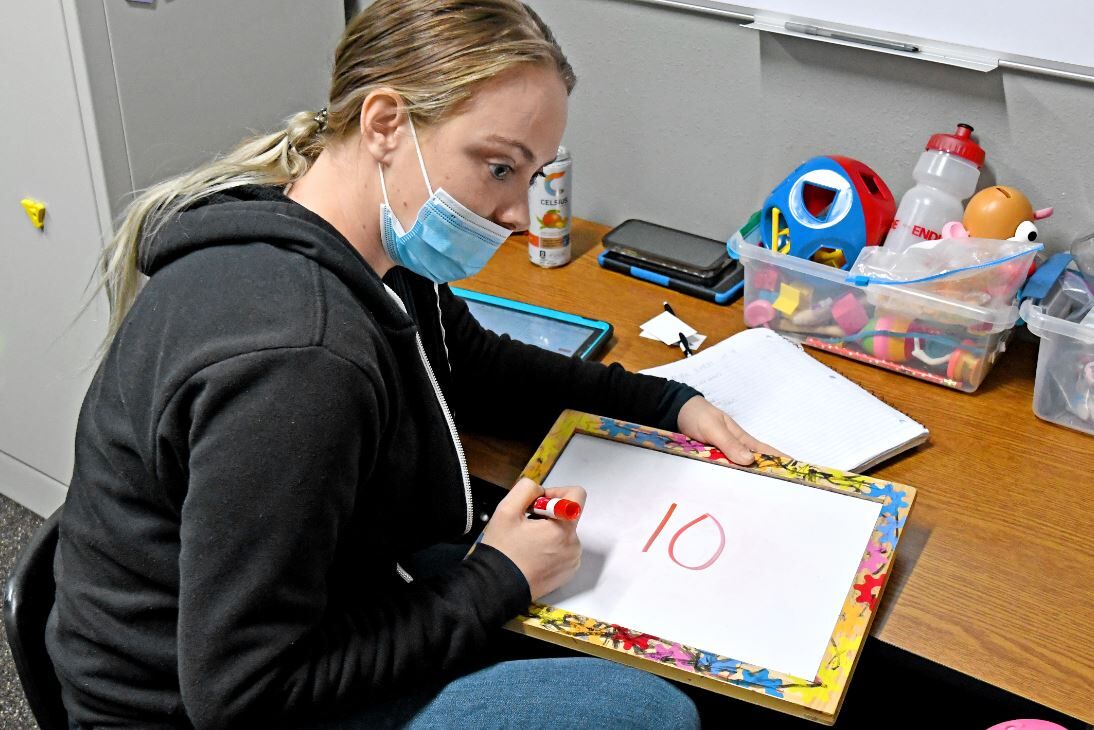 Kylee Wilmarth, a registered behavior therapist at Behavior Care Specialists, practices numbers with a child on the autism spectrum who is a client of the center. Therapists have seen clients make major progress despite disruptions caused by COVID-19 restrictions. 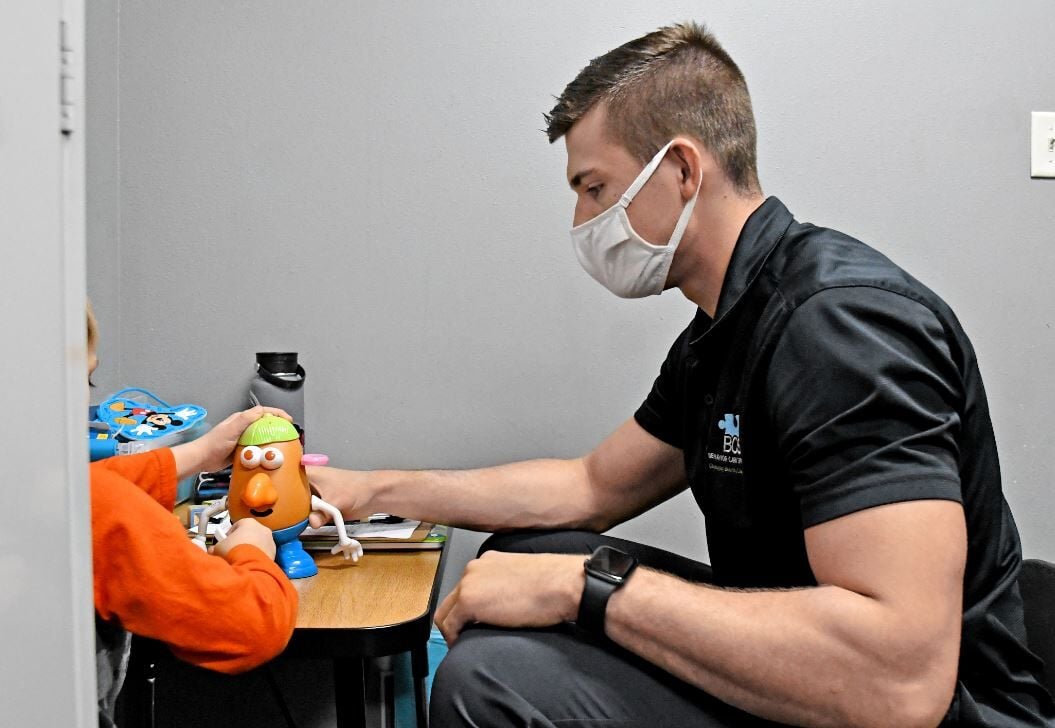 Austin Haak takes a break from teaching skills to a child on the autism spectrum who he works with at Behavior Care Specialists in Rock Valley to play a game. Haak is a junior at Dordt University pursuing a degree in special education and intends to become a behavior therapist working with children with autism.

Kylee Wilmarth, a registered behavior therapist at Behavior Care Specialists, practices numbers with a child on the autism spectrum who is a client of the center. Therapists have seen clients make major progress despite disruptions caused by COVID-19 restrictions.

Austin Haak takes a break from teaching skills to a child on the autism spectrum who he works with at Behavior Care Specialists in Rock Valley to play a game. Haak is a junior at Dordt University pursuing a degree in special education and intends to become a behavior therapist working with children with autism.

ROCK VALLEY—School disruptions due to the coronavirus pandemic would have been a major setback for the growth and development of children with autism if not for one N’West Iowa organization.

“COVID was kind of a blessing in disguise because we were able to do a lot of stuff that we wouldn’t normally be able to do,” she said.

The organization, based in Sioux Falls, SD, has 14 locations across South Dakota, Iowa, Minnesota, Wyoming and Texas serving children and adults on the autism spectrum.

The organization provides applied behavior analysis (ABA) therapy, an approach that uses positive reinforcement and repetition. Behavior therapists work one-on-one with children for sessions for one to eight hours, using games and other activities to build vocabulary or work on sensory issues.

Children come for up to 40 hours a week, but since many of them also are in school, they often use far less of that time each week. This came in handy last spring when schools moved to remote learning because of COVID-19.

“I had these extra hours I was able to divvy out during the school closure,” Vande Kamp said.

Unlike many organizations that work with children, Behavior Care Specialists is designated as a medical facility which meant it was able to stay open last spring when other places were shutting their doors. The center was able to partner with schools to combine therapy with homework to help children with autism maintain academic growth.

“They can’t sit in front of a computer and learn the same way other kids may learn,” Vande Kamp said.

Spending additional hours with behavior therapists also helped many children make progress on development goals that could have been six months to a year away. Potty training was a big milestone that several achieved last spring and summer because they were able to spend whole days at the center.

Coming to the center helped provide much-needed structure as well, another element that Vande Kamp said helped them make progress instead of regressing.

“A big part of autism is routine,” she said. “We have a couple kids that have high anxiety with their routine, so change really affected them and coming in here for increased hours helped them to relieve a little bit of it.”

Although most clients have gone back to their usual division of time spent at school and at the center, Vande Kamp said the progress they made last spring has been a lasting encouragement.

Being able to fall back on the center during early upheaval due to COVID-19 was a relief for parents as well. Melissa Toering, manager and scheduler for the Rock Valley office, said she continues to hear from parents about how much it helped to be able to continue therapy uninterrupted.

“The parents were so happy and grateful we could still go on,” Toering said. “We had the benefit of this time we didn’t expect we were going to have just to give a bunch of kids a boost.”

Another bonus Behavior Care Specialists added for parents is telehealth, which started last April as a way for therapists to continue helping the few clients who were isolating at home.

“We ended up kick-starting that because of COVID, because we did have some parents that weren’t comfortable or their kid was high risk. So we were able to put together some stimuli and reinforcement bins and get them to the parents so that we could do telehealth with them,” Vande Kamp said.

Other Behavior Care Specialists continue to use telehealth, but since school resumed in the fall, the Rock Valley office has mainly used videoconferencing to hold trainings for parents.

Going forward, Vande Kamp said the biggest barrier is being able to keep up with a rapidly growing client waitlist.

Behavior Care Specialists has been in Rock Valley since 2016, but up until a year or two ago the client waitlist hovered around five. The intake list has doubled to 10 in the last 18 months, with parents coming from as far as two hours away. The Rock Valley office has a majority of local clients, but also reaches as far as Sioux City, Storm Lake and Spirit Lake.

“We’re running out of space and COVID is not a good time to move,” Vande Kamp said.

She said the increase is mainly due to ongoing efforts to establish a presence in the community, from attending Rally in the Valley to connecting with doctors.

“We’re finally starting to get that recognition and the clinics are catching on to what we do because a lot of the doctors don’t even know what ABA therapy is or that we even exist,” Vande Kamp said.

Increasing service hours early into COVID-19 highlighted a need for staff, especially full-time behavioral therapists. Several college students pursuing special education are employed part-time at the center and when their schools shifted to online last year they started working full-time to help, but most have shifted back to part-time since.

“We have so many kids on the intake list that we want to help and we want to serve but we can’t right now until we get those therapists in and get them trained,” Vande Kamp said.

SIOUX CENTER—Sioux Center Health has been happy to add Micah Bonderson to its team as the hospital’s respiratory therapist.