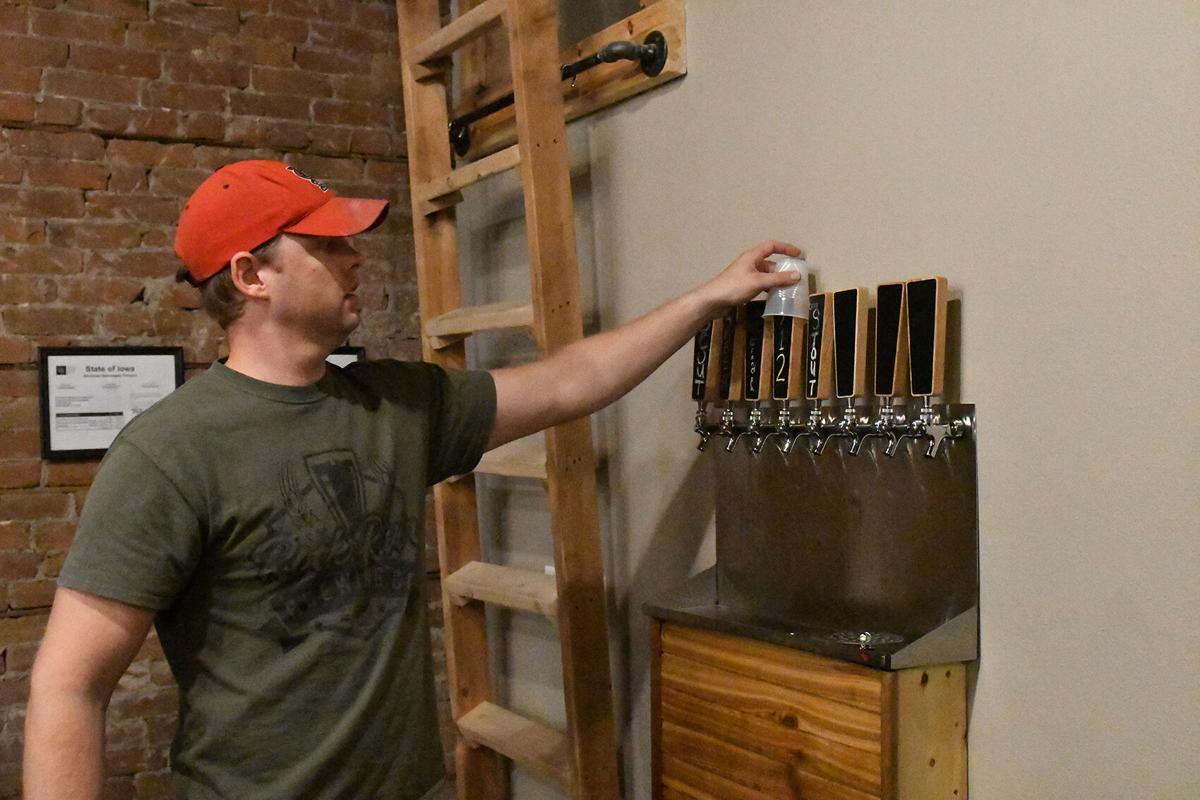 Dan Vander Zee, co-owner of Rock River Brewing Co. in Rock Rapids, reaches for a plastic cup sitting on one of the eight beer taps in the craft brewery. The business, which opened in late July, has five beers available but Vander Zee plans to eventually add more. 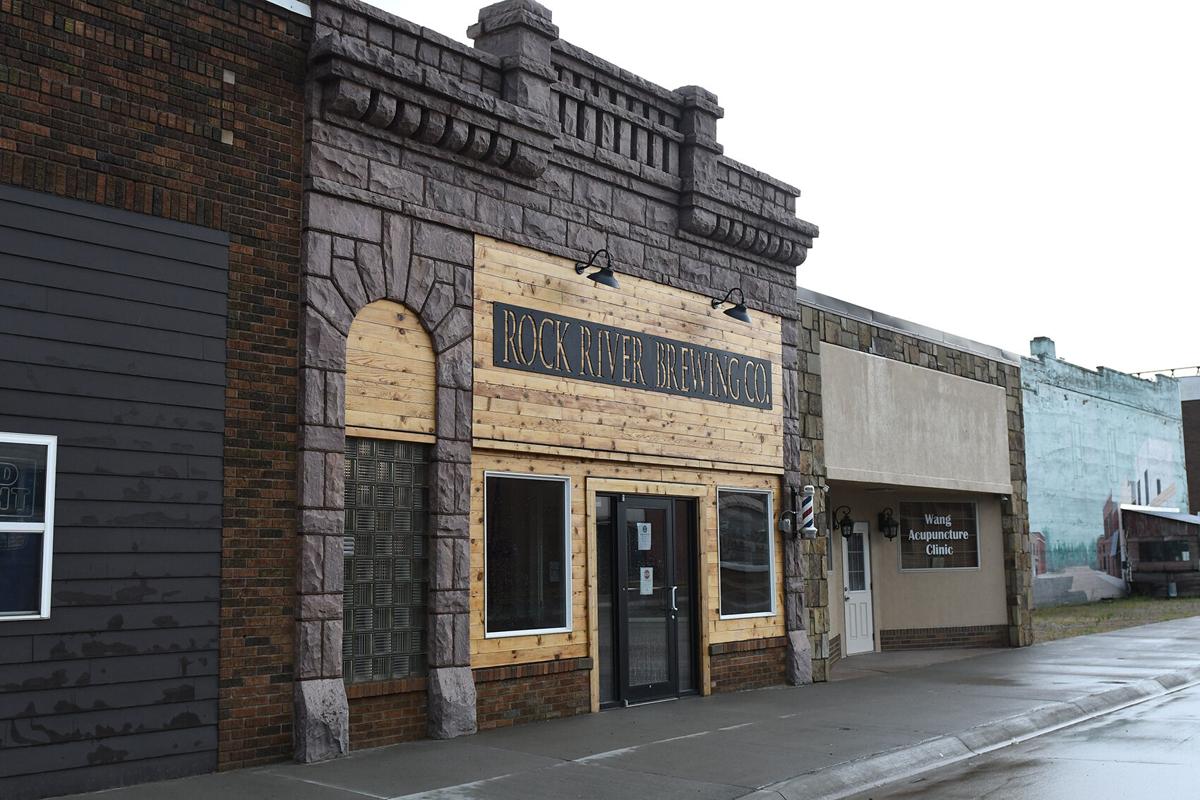 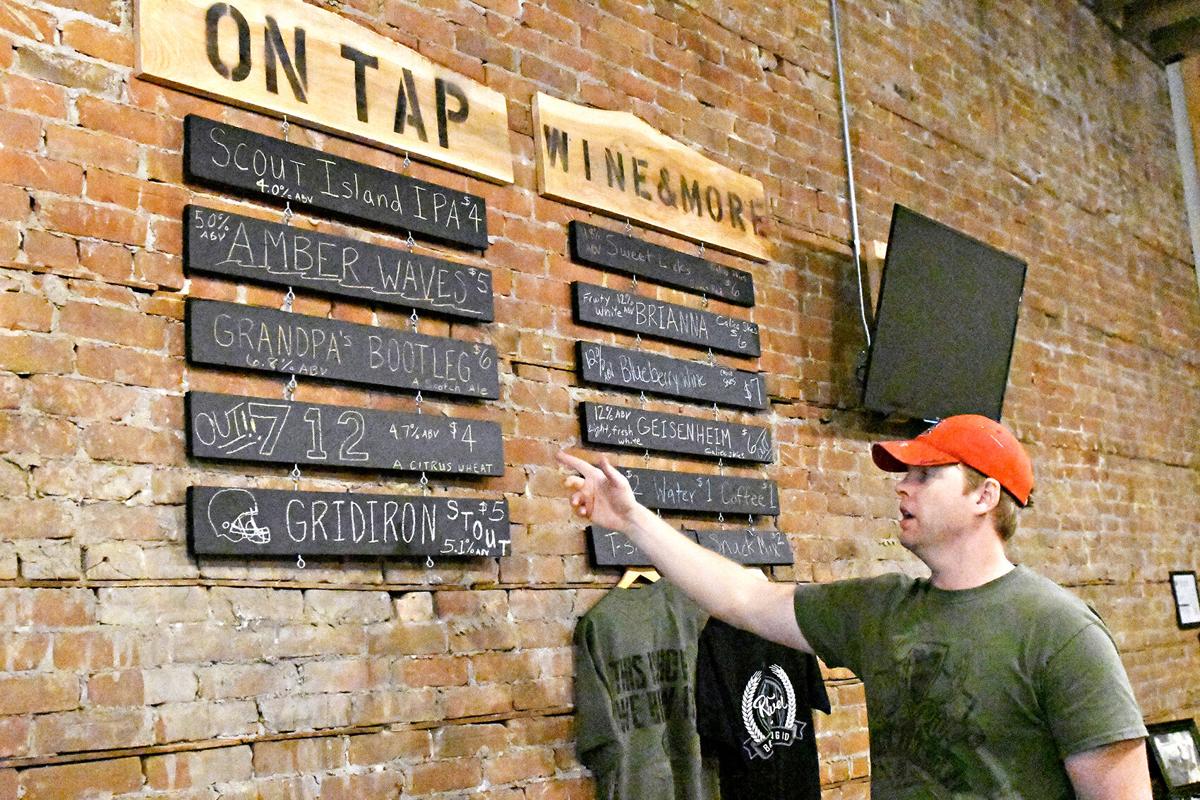 Dan Vander Zee, co-owner of Rock River Brewing Co. in Rock Rapids, talks about the five craft beers on tap at the brewery. The best-selling drink so far is the 712, which is a light, citrus wheat brew named after the regional area code.

ROCK RAPIDS—Business at Rock River Brewing Co. in Rock Rapids has been hopping since the small craft brewery opened.

Dan Vander Zee, who owns the brewery with his wife, Jami, said the brewery sold more than 700 beers during the opening weekend of Thursday-Saturday, July 30-Aug. 1.

“I went through six kegs,” Dan said. “It had a really good turnout and it’s been going well.”

The best-selling beverage so far has been The 712, a light citrus wheat beer named after the regional area code.

The 712 sold out following the opening weekend and Dan recently had to brew another batch of the beer, a process that takes multiple weeks.

“Usually, what I’ve been doing is about three weeks,” he said. “Different beers have different styles and take longer.”

Two other popular options have been the Scout Island IPA and the Amber Waves. The IPA is the lightest beer that has a slightly hoppy taste while the Amber Waves is a darker drink that has a roasted, malty flavor.

The Grandpa’s Bootleg, meanwhile, is a Scotch ale with a smoky flavor and the Gridiron Stout is the darkest brew with a malty yet smooth taste.

“All my beers I try to make pretty balanced,” Dan said.

While there are five beers available, Dan pointed out there are eight taps at the counter where the drinks are served. He plans to eventually add more beers to the lineup.

Those wishing to try multiple types of beers can order flights of three drink varieties for $7, which Dan said have been popular.

In addition to beer, the brewery has a selection of wines from Calico Skies Vineyard and Winery near Inwood. Nonalcoholic beverages, such as water, pop and coffee, also are available.

“Then we’ve got kind of like a Chex Mix snack mix and just encourage people if they want to bring food in,” Dan said.

The business also has put in place several health measures in light of the coronavirus pandemic, such as wiping down tables, having hand sanitizer and face masks available and placing signs throughout the space reminding customers to socially distance from other patrons.

As the brewery gets busier, the Vander Zees plan to hire additional help and possibly extend the hours accordingly.

Dan said the Rock Rapids community has been supportive of the brewery throughout the process of remodeling the building and getting the business open.

The front part of the structure used to house Spike’s Barber & Beauty and the back portion — which includes the brewing equipment and a game room — used to be an empty garage.

“It’s definitely been rewarding seeing everything come together with all the remodel work, and when you actually get your beers in people’s hands and then they drink it and they like it,” Dan said.

“I’ve had multiple people come back three days in a row, so we’re getting some repeat business.”

We all know 2020 has been terrible but there have a been a few bright spots in N’West Iowa and allow me to share a couple:

ROCK RAPIDS—Dan and Jami Vander Zee are brewing up a new business in their hometown.