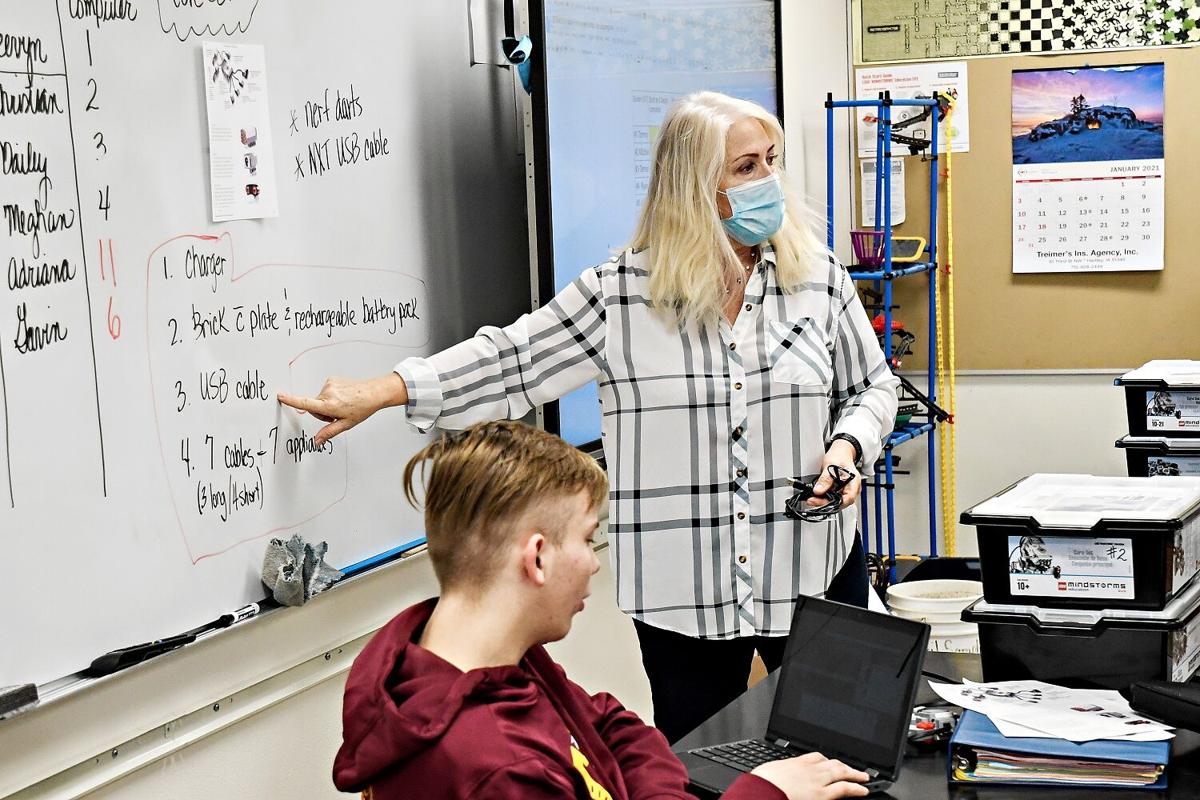 Hartley-Melvin-Sanborn High School sophomore Mitchell Meyers works on his laptop as Terry Putnam points to a set of activity instructions on her classroom whiteboard. Putnam, a longtime science, technology, engineering and math teacher in the Hartley-Melvin-Sanborn School District retired Wednesday. 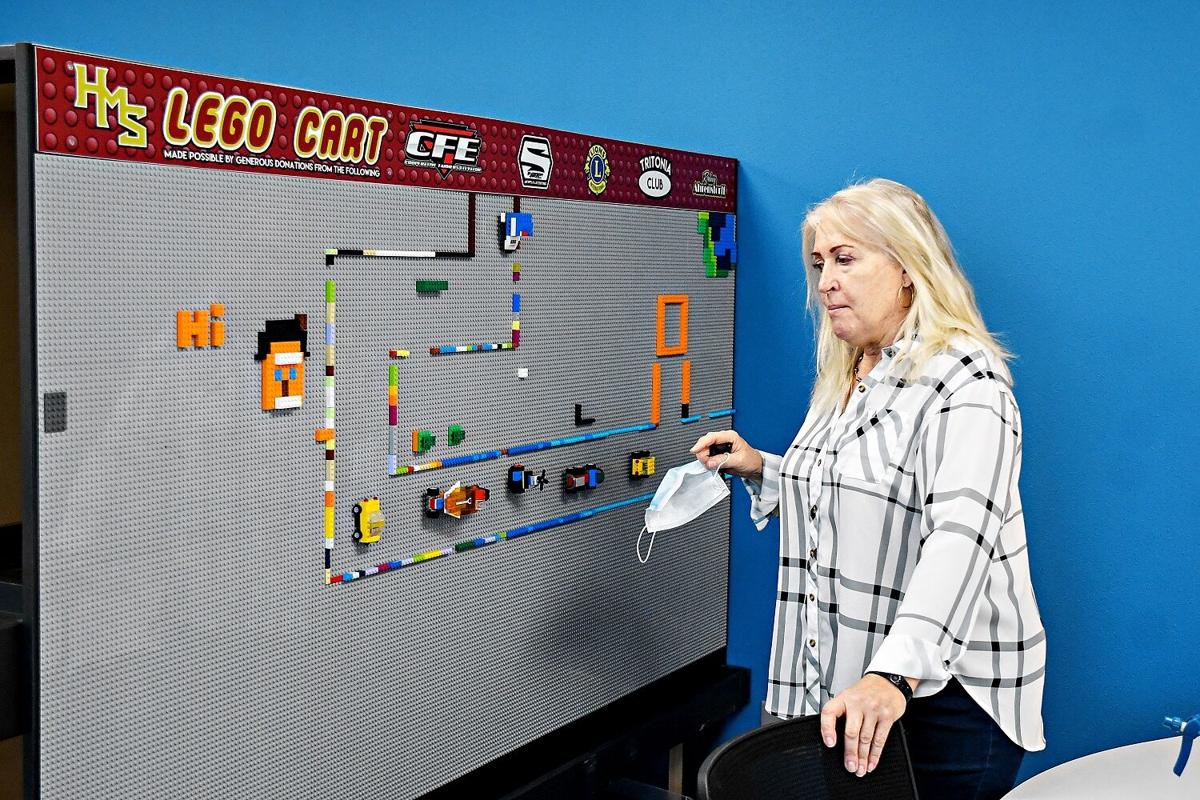 Longtime science, technology, engineering and math teacher Terry Putnam talks about the Lego Wall the Hartley-Melvin-Sanborn School District purchased in 2017. The wall helps introduce simple design and building concepts to elementary students, which they can then expand on in future STEM classes.

Nor will she forget her years in the district, which she said is a family.

“Hartley has been very, very good to all of their teachers and the district,” said Putnam, 62, who retired as the district’s K-12 science, technology, engineering and math and Talented and Gifted teacher Wednesday, Jan. 13.

“I love it here. It’s going to be hard for me to leave, but I’m very happy and thrilled that I got a chance to be here as long as I have.”

A native of North Dakota, Putnam taught a little more than a decade in three other states before coming to N’West Iowa.

When it comes to teaching STEM, Putnam’s philosophy isn’t just to have students do hands-on activities but to connect them with opportunities outside the classroom.

“It’s like a science fair invention that allows the kids then to share their interests, and it’s a great time to network and kids get to meet each other,” she said.

Putnam also praised the district’s support in embracing STEM curricula that includes skills such as coding, robotics and 3D printing.

“The administration here has made it just exceptional because they’re progressive. They have a process that allows teachers to explore new ideas,” Putnam said.

One of those ideas came to fruition in 2017 when the district purchased a Lego Wall with help from a communitywide fundraiser. Putnam said school board vice president Scott Vollink played an instrumental role in the fundraising effort as did community groups like the Hartley Lions Club and businesses like the Cooperative Farmers Elevator.

The two-sided Lego Wall is housed in the elementary, and Putnam spoke about how the educational benefits it provides.

“If you start out a child with a Lego that allows them to have the freedom to design and build, it’s progressively more and more complex,” she said.

Since Putnam works with all grades in the district, she has been able to follow students along their academic journeys from early elementary through the time they are seniors in high school.

That’s true for seniors Sam Heyn and Hailey Grotluschen, who are enrolled in a semesterlong high school STEM class in which students work with Lego EV3 Mindstorm robotic kits.

“EV3 is using robots and programming and coding to go through different obstacles to finish tasks,” Heyn said.

Putnam said she has known Heyn and Grotluschen, “since they were infants.”

“It’s pretty special here at Hartley because whatever year that they’re at, I get to continually work with them,” Putnam said. “It’s kind of like looping, like a looping situation.”

High school principal Nathan Hemiller praised Putnam for being a teacher willing to spend her own time and resources to educate students and provide them learning opportunities.

“Her passion to push students to achieve more is one of the best I’ve ever seen in a teacher,” Hemiller said. “She’s been devoted to the district and devoted to students in the time that I’ve known her. She is truly a special person and we are going to miss her at H-M-S.”

One of the students Putnam has taught at Hartley-Melvin-Sanborn through the years is the person who filled in her position as STEM and TAG teacher: 2007 graduate Naet Hoaglund.

Hoaglund and Putnam co-taught STEM and TAG classes since August as a way to let Hoaglund transition into the position, which he did after Putnam’s final day Wednesday.

“For Naet to take over my position — it was meant to be,” Putnam said. “It’s a perfect fit.”

Education: Graduated with a bachelor’s degree in education from the University of South Dakota in Vermillion in 1988.

Experience: Taught for 33 years in four states; taught in the Hartley-Melvin-Sanborn School District for 21 years; served on the Northwest Iowa STEM Region Board for six years.