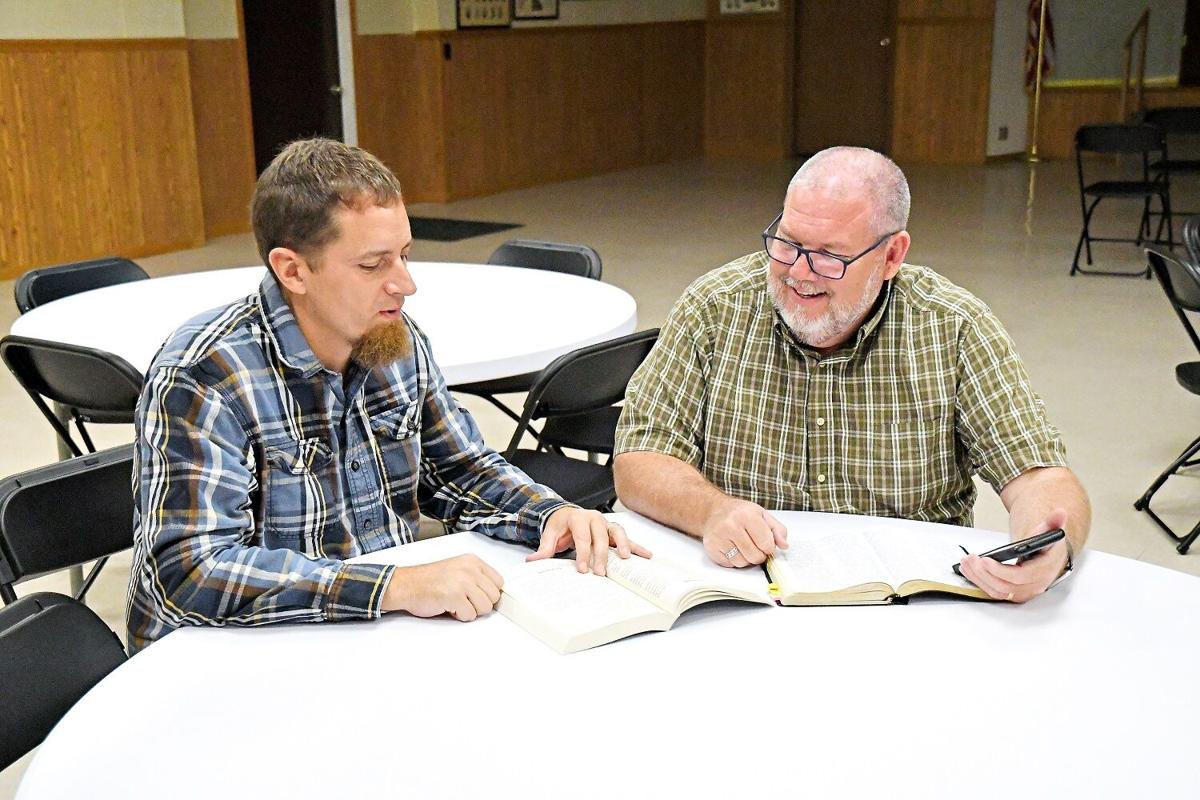 Primghar pastors Cory Grimm of the American Reformed Church and Mike Cooper of the Church of Christ and United Church crack into a lesson of the Core 52 Bible study series. Their congregations are among the many that will participate in the communitywide study of Scripture. 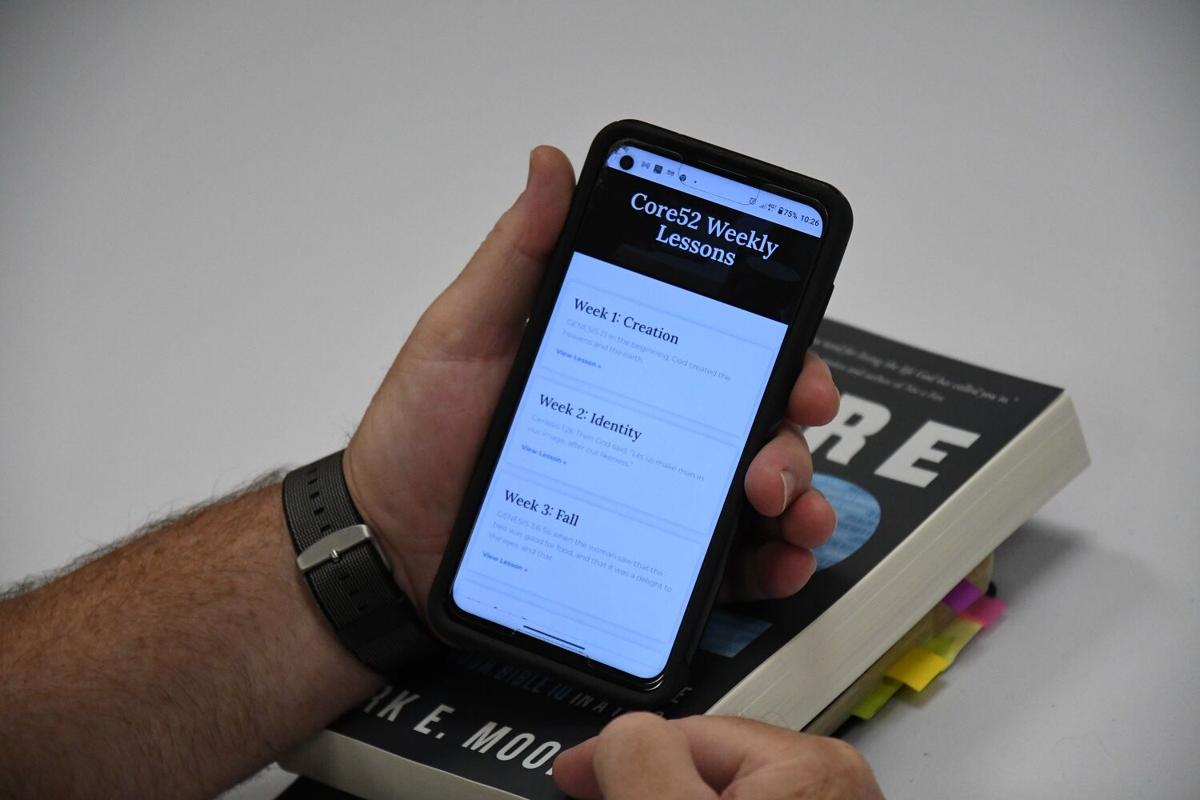 Mike Cooper, pastor at the Primghar Church of Christ and United Church of Primghar, pulls up the online version of the Core 52 Bible study, with which users can follow the weekly series.

Primghar pastors Cory Grimm of the American Reformed Church and Mike Cooper of the Church of Christ and United Church crack into a lesson of the Core 52 Bible study series. Their congregations are among the many that will participate in the communitywide study of Scripture.

Mike Cooper, pastor at the Primghar Church of Christ and United Church of Primghar, pulls up the online version of the Core 52 Bible study, with which users can follow the weekly series.

PRIMGHAR—Mike Cooper’s excitement about a new communitywide Bible study in Primghar can be plainly heard in his voice.

“If we’re connected to the Scripture, eventually it’s going to come out of our lives. It’s going to shine out of us and that’s huge,” said Cooper, pastor at Primghar Church of Christ and United Church of Primghar.

He made the comment while talking about the Core 52 Bible study, the launch party for which was held Wednesday, Sept. 1, in the Primghar Community Building.

The yearlong study series will be conducted in small groups consisting of people in Cooper’s congregations as well as worshippers at First Presbyterian Church of Paullina, Grace Lutheran Church of Primghar and Primghar American Reformed Church and with the St. Joseph O’Brien County Parish.

The study also is open to people unattached to a church congregation and simply seek to learn more about Scripture.

The name of the study comes from the guide the groups will be using as they work their way through Scripture: “Core 52: A Fifteen-Minute Daily Guide to Build Your Bible IQ in a Year,” by Mark E. Moore.

The guide goes through 52 Bible verses spanning Genesis to Revelation, with one week dedicated to each verse.

“We’re going to really weave the big picture of Scripture through the whole series,” Cooper said.

Through each week of the study, participants read the relevant verse as well as a brief essay Moore wrote to accompany and explain the verse. They also work on verse memorization, read Bible stories related to the verse, meditate on “trajectory verses” and identify how they could apply the spiritual lesson of that week’s study to their lives.

The groups will aim to meet at least one time a month, although the groups will be free to meet more often than that if they choose. Some meetings will take place in peoples’ homes while some will happen in church buildings.

Cooper has been in contact with Moore to help get the Core 52 study organized in Primghar. For instance, Moore sent two personalized videos to the churches inviting them to be involved in the study.

Cooper was pleased at the amount of interest the Bible study has generated within the O’Brien County seat community in the days leading up to Wednesday’s launch. He originally ordered 40 copies of “Core 52,” but when it became evident more would be needed, he ordered 40 more.

Though he said a person could complete the Core 52 study on their own, the community aspect of the series is what Cooper was especially looking forward to. He pointed to Ecclesiastes 4:12, which reads, “Even though a man might prevail against one if he’s alone, two will be able to withstand him and a threefold cord is not quickly broken.”

“The more people we’re involved with that are studying together, the stronger we’re going to be,” Cooper said.

Cory Grimm, pastor at American Reformed Church, said he is excited about the conversations the study will generate among people who participate.

“If people in all different small groups are doing the same study at the same time, then hopefully those conversations will spill over into neighborhoods and at work and it’ll just be a great learning tool for everybody together,” Grimm said.

“I’m excited because even people that grew up in church their whole lives sometimes don’t have a good blueprint or map in their mind of what the whole story of the Bible is. So just in one year to get a really good overview of the whole story I think will help people.”

The Bible study will not be the first of its kind to happen in Primghar, but Cooper said it has been more than 15 years since the churches in town collaborated on a study.

He hoped that by the study’s conclusion, the town would have a stronger following of Jesus Christ and that residents would feel a closer bond to one another.

“Jesus wants us to work together. It doesn’t matter which church we’re part of. He loves us all the same, so we need to be willing to work with each other and you come closer to Him by working together,” Cooper said. “I just think it’s so important.”

This story was first published in the Sept. 4, 2021, print edition of The South O'Brien Sun.