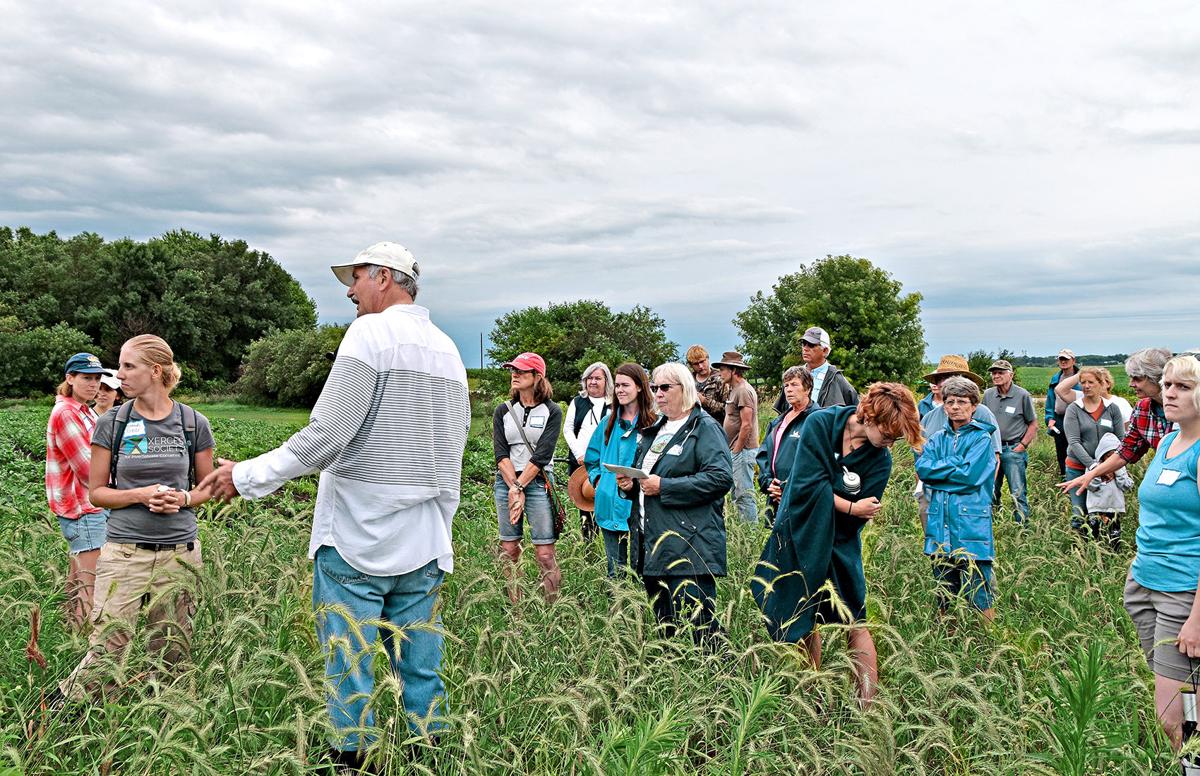 Paul Mugge presents during one of the many field days he has hosted at his organic farm near Sutherland. He recently received the Practical Farmers of Iowa’s 2020 Sustainable Agriculture Achievement Award. 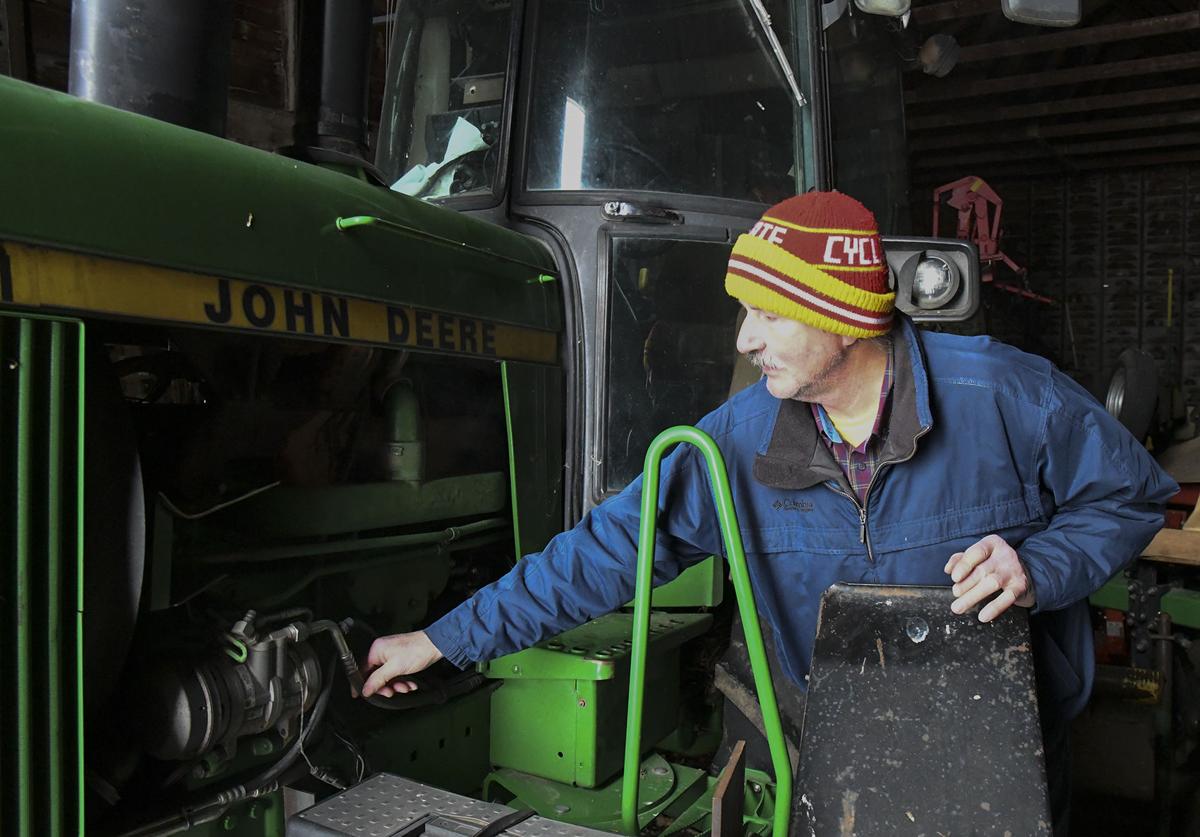 Paul Mugge presents during one of the many field days he has hosted at his organic farm near Sutherland. He recently received the Practical Farmers of Iowa’s 2020 Sustainable Agriculture Achievement Award.

SUTHERLAND—Paul Mugge has been recognized for championing organic farming.

The honor is given each year by PFI to an individual or couple who has shown exemplary commitment to sustainable agriculture, generously shared their knowledge with others and been influential in efforts to foster vibrant communities, diverse farms and healthy food.

Mugge received the award on Saturday, Jan. 18, inside the Iowa State Center’s Scheman Building on the campus of Iowa State University during PFI’s 2020 annual conference, “Reclaiming Resilience,” in Ames.

“It’s quite an honor,” the 68-year-old said. “I’m just humbled. These are my peers. These are other sustainable and organic farmers. It’s always special to be honored by your peers.”

Mugge and his wife, Karen, farm 300 acres of certified organic crops. They have three children and seven grandchildren, who all live relatively close to them and sometimes help out on the operation.

The couple’s farm, located about three miles west of Sutherland, has been certified organic since 2001 and features:

Mugge, who has been a PFI member for more than 30 years, received the association’s Master Researcher Award in 2013 in honor of his long-term commitment to conducting on-farm research and sharing the results with others.

He has conducted 65 on-farm trials — a PFI record that has yet to be bested — to field-test practices, including ridge-tilling, the late-spring soil nitrate test, small grain production, hoop-house production, weed management and prairie strips.

Mugge also has hosted 22 field days on his farm over the years to share information with others to help promote sustainable agriculture.

The field day events he hosted on July 17 explored his work establishing prairie and beneficial insect habitat, and organic row crop production and mechanical weed control on his farm.

Mugge is especially excited about the prairie strips he has planted. Over time, he thinks the strips may help control weed populations by supporting seed-eating insects and birds.

“Even if we don’t see that bottom-line change, it’s beautiful,” he said. “There’s just something therapeutic about going out there and walking through a prairie, even a reconstructed prairie.”

Mugge served on PFI’s board of directors 1990-98 — including as its vice president — and has been active in leadership and volunteer roles with many other organizations during his career as a farmer.

He worked 1974-76 as an aerospace engineer for Boeing in Seattle — where he met his wife — before returning home to help out his parents, Lyle and Mildred, on their rural Sutherland family farm.

The operation transitioned field by field to organic farming 1998-2000.

“Back in 1998, things looked really, really bad for agriculture,” Mugge said. “I was raising hogs. That’s when hogs got down to 10 cents a pound. We were losing loads of money on hogs.”

To him, organic farming “looked like an opportunity to make a living.” Involvement with other farmers through PFI gave him support and encouragement to begin farming organically.

He noted organic farming is a set of practices.

“I can’t use genetically modified organisms,” Mugge said. “I can’t spread any herbicides or insecticides or fungicides.

“I have a whole big book of rules,” he said. “I’m supposed to plant untreated organic seed — corn, soybeans, whatever. There are a lot of rules.”

The National Organic Program, part of the U.S. Department of Agriculture’s Agricultural Marketing Service, has regulatory oversight responsibilities for the federal organic standards and the accreditation of organic certifying agents.

“They certify the certifiers, you might say,” Mugge said. “There are a lot of different independent organizations that certify farmers.”

He is a member of the Organic Crop Improvement Association, which is based in Lincoln, NE.

“They’re the ones that keep us honest,” Mugge said. “Every organic farmer is inspected every year. They can do spot checks if they want to.

“It’s usually in the summertime,” he said. “They want to see a few weeds growing so they know it wasn’t sprayed, which isn’t a problem.”

He mentioned the bookkeeping for an organic farm can be overwhelming.

“If some little tofu maker in Japan buys a bushel of my beans, it’s traceable all the way back to what variety of beans was planted on what day on what field on my farm,” Mugge said.

“It requires a lot more management,” he said. “It’s management-intensive. It’s knowledge-intensive. You have to know a little bit about ecology — soil ecology, plant ecology.”

He noted interest in organic farming is growing.

“It takes three years of following the rules before you can be certified, but there’s a lot interest right now just because of the relative price difference between conventional and organic,” Mugge said. “At least that’s part of what’s driving the change.”

“It really cuts down on the nitrogen and phosphorus leaving the farm,” Mugge said. “It’s keeping our water cleaner.”

In October, farmer Paul Mugge of rural Sutherland was selected as the 2019 winner of the Spencer Award, presented by the Leopold Center for Sustainable Agriculture at Iowa State University in Ames.

The Spencer Award is one of the most prestigious awards of its kind. Administered by the Leopold Center, it recognizes farmers, researchers and teachers who have contributed significantly to the environmental and economic stability of the Iowa farming community.

A 1974 ISU graduate in aerospace engineering, Mugge is tentatively scheduled to receive the award during the 2020 Iowa Water Conference, which is set for April 8-9 in Ames.

In a letter supporting Mugge’s Spencer Award nomination, Practical Farmers of Iowa executive director Sally Worley wrote “Paul has a long-term vision for the farm where profit and stewardship are mutually inclusive . . . Paul’s farm is a wonderful example of what is possible on Iowa’s landscape.”

The Spencer Award is named after Norman and Margaretha Spencer, who farmed in Woodbury County for 40 years.

Graduates of ISU, the Spencers maintained an active relationship with the university and several professors who encouraged them to conduct research on sustainable practices and family farming.

The Spencer family established the award in 2001 through an endowment that provides a $1,000 cash prize for each winner.

SUTHERLAND—The high attendance of a field day on Paul and Karen Mugge’s farm west of Sutherland showed that interest in organic farming is booming.