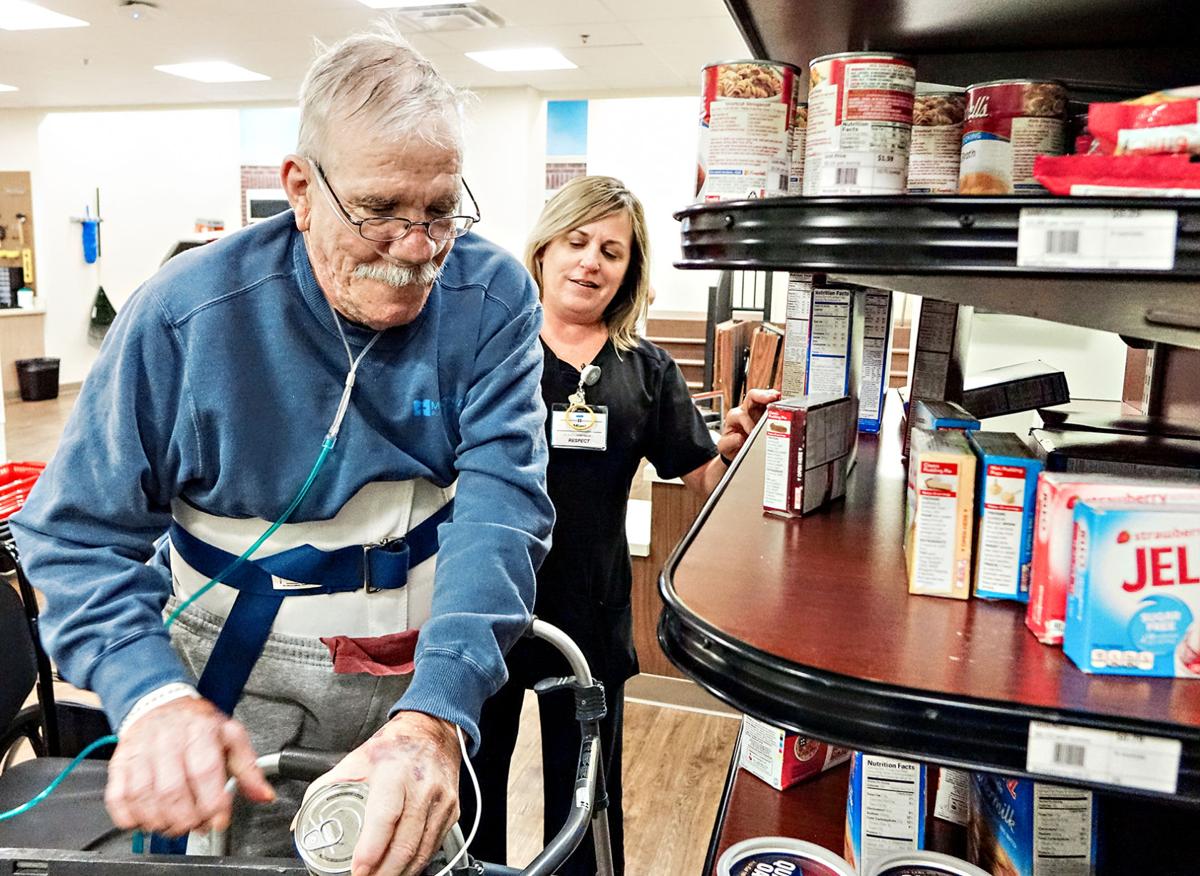 Gordon “Gordy” Rohrs of Paullina practices going grocery shopping with the help of occupational therapist Mimi Mollner inside a simulated community at Madonna Rehabilitation Hospitals in Omaha, NE. Gordy has been recovering at Madonna since Oct. 9 from complications involving a bacterial skin infection. 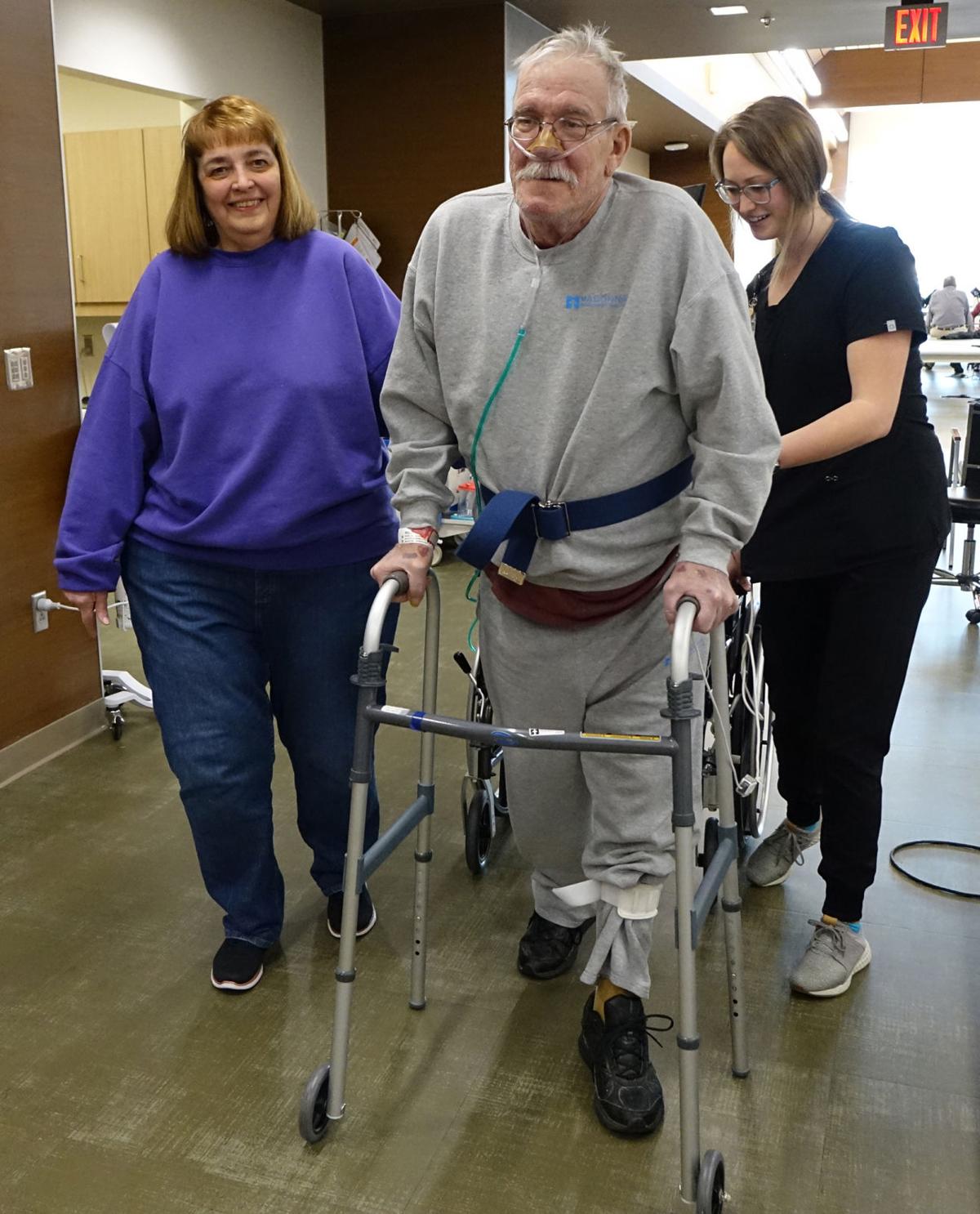 Seventy-one-year-old Gordon “Gordy” Rohrs of Paullina walks with his wife, Shirley, and physical therapist Jessica Onsager in the acute rehabilitation gym at Madonna Rehabilitation Hospitals in Omaha, NE. Gordy has been recovering at Madonna since Oct. 9 from complications involving a bacterial skin infection.

Gordon “Gordy” Rohrs of Paullina practices going grocery shopping with the help of occupational therapist Mimi Mollner inside a simulated community at Madonna Rehabilitation Hospitals in Omaha, NE. Gordy has been recovering at Madonna since Oct. 9 from complications involving a bacterial skin infection.

Seventy-one-year-old Gordon “Gordy” Rohrs of Paullina walks with his wife, Shirley, and physical therapist Jessica Onsager in the acute rehabilitation gym at Madonna Rehabilitation Hospitals in Omaha, NE. Gordy has been recovering at Madonna since Oct. 9 from complications involving a bacterial skin infection.

OMAHA, NE—Gordon “Gordy” Rohrs has been in a fight for his life.

The 71-year-old Vietnam War veteran has been tested on a battlefield of a different kind stemming from complications involving a bacterial skin infection he contracted over the summer.

However, the Paullina man has been on the road to recovery in Omaha, NE, at Madonna Rehabilitation Hospitals, whose staff members he credits for saving his life.

“If it wasn’t for Madonna, I would­n’t be alive,” Gordy said.

“This is an awesome place,” she said. “There are miracles down here. I’m glad we came here.”

The bacterial skin infection Gordy contracted in his right leg was cellulitis, which is “common” but “potentially serious,” according to the Mayo Clinic.

He was taken on Sept. 5 to MercyOne Siouxland Medical Center in Sioux City, where he was diagnosed with pneumonia and respiratory failure.

“He went for cellulitis in his leg,” Shirley said. “Then he got gout and then he got pneumonia.”

Because of his diagnoses, Gordy had to be put on a ventilator for more than three weeks before he was taken on Oct. 9 to Madonna’s campus in Omaha.

“It was clear it was going to be a long time before he was going to breathe on his own without the ventilator, so he had a tracheostomy placed,” said Dr. Susan Ohnoutka, hospitalist and medical director for Madonna Rehabilitation Specialty Hospital, a medical center for patients with complex medical conditions, chronic illnesses or catastrophic injuries.

A tracheostomy is a hole surgeons make through the front of a person’s neck and into the windpipe, or trachea. A tracheostomy tube is placed into the hole to keep it open for breathing.

Gordy, who has had to use an oxygen tank to help himself breath for the past eight years, saw his respiratory status decline as he was being transported by ambulance to Madonna.

“I actually met the ambulance in our parking lot due to his critical instability,” Ohnoutka said. “I have never had to do that in five years at Madonna.

“We got him into the hospital, but he continued to decline and therefore had to be sent back to an acute care hospital to get further intensive care,” she said.

The acute care hospital that Gordy was taken to was CHI Health Lakeside in Omaha, where he was treated for respiratory failure.

He was transported on Oct. 17 from CHI Health Lakeside back to Madonna.

“He was still completely dependent on the ventilator for his breathing,” Ohnoutka said. “He also had issues with congestive heart failure, atrial fibrillation and a collapsed lung.

“Gordy’s prognosis was ex­­tremely poor when he first got to us,” she said. “For a number of weeks after his admission here, we did not think he was would ever be able to get off the ventilator and breathe on his own.”

However, a team of Madonna physical therapists, occupational therapists, dietitians, respiratory therapists, nurses, pulmonologists and Ohnoutka continued to push Gordy to get stronger and to breathe on his own.

“He had a never-give-up attitude that really was what helped him overcome so many obstacles,” Ohnoutka said. “Even with setbacks along the way, he was always positive and ready to work hard.

‘Kept working with me’

Gordy credited Madonna’s staff members for pushing him during his recovery process.

“They got me up and exercising,” he said. “They kept working with me.”

“They weren’t sure they could ever get him off the vent or the trach when he came here,” she said.

The timeline of Gordy’s re­­covery process at Madonna has included the following milestones:

By the end of his stay at Madonna’s specialty hospital, Gordy was walking 20-25 feet at a time with a walker and a physical therapist.

“When I first started, it was tough,” said Gordy, who was described as medically fragile when he first was brought to Madonna.

He has undergone occupational, physical, recreational and speech therapy while he has been recovering at Madonna and has utilized specialized technology, including a functional electrical stimulation (FES) bicycle to strengthen weak muscles.

“He went to the therapy gym every day even while on the ventilator and did the FES bike and used a machine that helps with supportive walking as well as other strengthening exercises,” Ohnoutka said. “He participated in activities of daily living, such as dressing and bathing himself.”

Because Gordy can tolerate three hours or more of therapy a day, he transitioned to Madonna’s acute rehabilitation area on Dec. 30.

Gordy, who is able to walk up to 120 feet at a time with a walker and a physical therapist, is scheduled to leave Madonna and go home to Paullina on Friday, Jan. 24.

His goal by then is to continue making progress and to get back to walking on his own. He is determined to go home on his discharge date.

“That’s what I’m shooting for,” Gordy said. “That’s why I’ve been working hard. They work me hard here.”

Gordy and Shirley (Kluender), who have been married for about 23 years, grew up on family farms about a mile apart from each other near Paullina.

His main job during his time overseas in Vietnam was as a door gunner on UH-1H “Huey” helicopters.

Gordy recalled three times the helicopter he was on getting shot down during his tour of duty in Vietnam.

“If we went in and started getting shot at, I had an M60 machine gun to shoot back with,” he said.

Gordon also remembered another time he had a brush with death while flying on a helicopter in Vietnam.

“A B40 rocket landed in my tail boom,” he said. “It didn’t explode, though. If it would’ve exploded, there wouldn’t have been enough left of me to worry about. I was only about 10 feet away from it.”

For his military service, Gordy received a Bronze Star Medal, which is awarded to any person who, while serving in any capacity in or with the U.S. military after Dec. 6, 1941, distinguished himself or herself by heroic or meritorious achievement or service.

On Dec. 27, Gordy received a different kind of recognition — the Madonna Spirit Award.

“We give this award to very select patients that have overcome very great odds and many obstacles to get better with perseverance and courage,” Ohnoutka said.

“Gordy exceeded all our expectations while he was here, considering he was so critically ill when he came to us,” she said. “It was a pleasure to see him have such a good outcome.”

Gordy, who was surprised by and pleased with the honor, again expressed his gratitude to Madonna’s staff members.

“I wouldn’t be here if it wasn’t for all of the help they’ve given me,” he said. “This place is the place to be if you need help.”