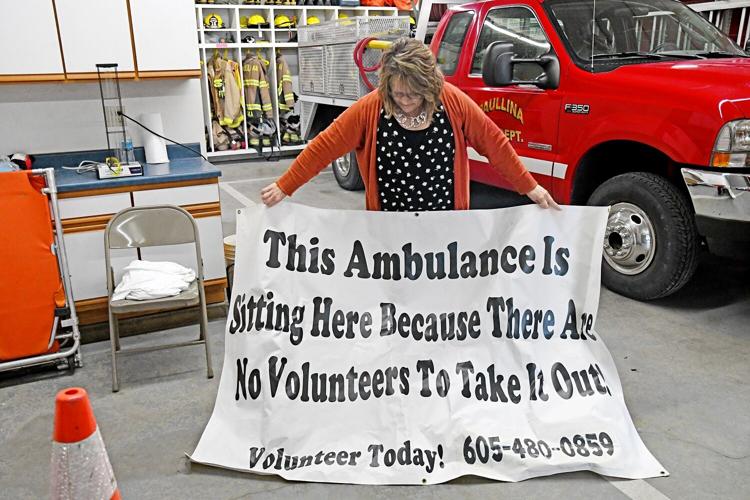 Laura Palmer, an emergency medical technician with the Paullina Ambulance Service, holds up a banner that hung on the ambulance last year as the vehicle was parked along Main Street. The recruiting effort helped grow the group from five members to 18. 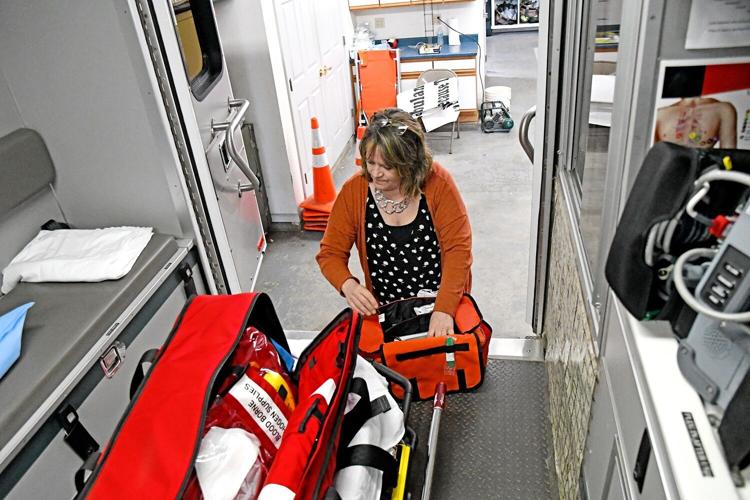 Laura Palmer, an emergency medical technician with the Paullina Ambulance Service, packs up a jump bag in the group’s vehicle. Palmer is one of several new recruits that joined the organization in the fall. 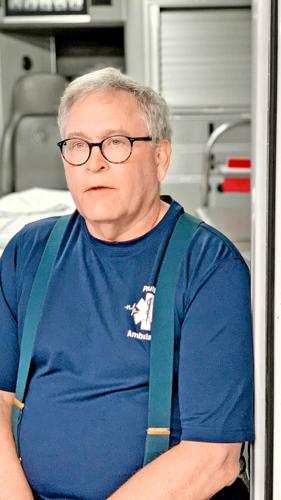 Longtime Paullina Ambulance Service member Jeff Patterson retired from the volunteer organization in March. The 66-year-old served as an emergency medical technician for the group for about 18 years and was an EMT about 10 years before he and his wife moved to the O’Brien County community in 2000.

Laura Palmer, an emergency medical technician with the Paullina Ambulance Service, holds up a banner that hung on the ambulance last year as the vehicle was parked along Main Street. The recruiting effort helped grow the group from five members to 18.

Longtime Paullina Ambulance Service member Jeff Patterson retired from the volunteer organization in March. The 66-year-old served as an emergency medical technician for the group for about 18 years and was an EMT about 10 years before he and his wife moved to the O’Brien County community in 2000.

PAULLINA—The Paullina Ambulance Service is rebounding in a big way from where it was the past couple of years.

The emergency medical services group went from about five members in May 2020 to its latest head count of 18 volunteers.

“We have some growing pains, but the good kind of growing pains,” said service director and emergency medical technician Lauri Struve, who has served with the group since 2011.

There was a period over the past few years where the ambulance service relied on assistance from Granville and Primghar to cover day calls because there were not enough Paullina responders available.

Jeff Patterson, the only other EMT at the time, worked in Mapleton during the week, which meant Struve was the only one who could go to calls. However, since she works in Orange City during the day, she was only available at night during weekdays.

Struve and Patterson renewed their two-year EMT certification last year, although Patterson indicated it would be his final certification period before retiring. After he retired, that would have left Struve as the only EMT.

“If Jeff’s done, I’m not doing it with two people again,” Struve said.

The ambulance service held an information meeting in September for an EMT class that was set to start later that month.

Struve recalled how the ambulance service went to the Paullina City Council for help in trying to attract recruits. She — along with emergency services education coordinator Kevin Miller of Northwest Iowa Community College in Sheldon and Keri Oostra of Granville EMS — also went door to door to people in town asking if they would be interested in joining the team.

Their efforts paid off.

About two dozen people attended the informational meeting, with several choosing to take the class to join the Paullina Ambulance Service.

“It’s really exciting that we’ve got all these folks,” Struve said. “RNs are amazing. Oh my gosh. I can’t even find words to describe how amazing those women are.”

Palmer spoke about her decision to join the EMS team, recalling a period of a few weeks last year in which the ambulance was parked along Main Street with a banner on it that read, “This ambulance is sitting here because there are no volunteers to take it out.”

Around that same time, a child who lives next door to Palmer had an accident that required an EMS response from out of town. Palmer recalled it taking 20-25 minutes for the ambulance to arrive, which further solidified her choice to get involved with the Paullina ambulance team.

“Between this and seeing what happened to him, I was like, ‘OK, we’ve got to do something about this,’” Palmer said.

The EMT class Palmer and the other incoming members September-January was a compressed hybrid model, meaning some aspects were taught in person and some parts were done online. Oostra taught the in-person portion in Paullina, which meant the students did not have to drive back and forth to NCC.

Although new members were not able to provide direct patient care on calls while they were still taking classes, they were able to drive, help with equipment and assist with ancillary tasks.

Struve said having more members who are in town during the day has meant the ambulance service has been able to respond to a larger call volume than usual.

“Previously from 6 a.m. to like 3:30 or 4 p.m. Granville or Primghar were taking our calls, where now we’re here to take them,” she said, adding that Paullina EMS does not take inter-facility transfer calls, just 911 calls.

She also noted how the boosted membership has resulted in the ambulance service having responders that live throughout the organization’s coverage area. That’s allowed individual members to arrive on scene quickly.

Each EMT also carries a “jump bag” in their private vehicles that contains face masks, gowns and other medical equipment that lets members administer emergency care wherever they are.

She gave a recent example in which one of the new EMTs was able to arrive on scene and provide patient care before the rest of the ambulance team showed up because she lives less than a mile from the incident.

Keeping an ample supply of personal protective equipment has not been a struggle for Paullina EMS during the coronavirus pandemic either as O’Brien County emergency management agency coordinator Jared Johnson has regularly distributed such materials to the group.

“Jared has been amazing with helping us maintain and supply our PPE,” Struve said. “He’s been like Santa Claus.”

One challenge that’s come with more day calls is finding child-care assistance for EMTs who are parents when they get paged out to a call.

The group is hoping to set up a system of “pager parents” who would coordinate schedules with EMTs so that if the ambulance team member is called out, they already have someone lined up to watch their children. The EMS group already has received inquiries from community members interested in becoming pager parents.

“I know some of the gals that have stepped up and said they’d like to help do that,” Struve said. “That’s a pretty good bunch.”

Another eventual goal for the group is to purchase a new ambulance that would have a power-load cot system, which would make lifting people in and out of the vehicle easier.

“We’re hoping to — crossing fingers and toes — have a deal on that shortly and have that ambulance by the end of the year,” Struve said.

Being able to help his community is what Jeff Patterson enjoyed about serving as an emergency medical technician.

The 66-year-old Paullina man served as an EMT for the Paullina Ambulance Service for about 18 years before retiring in March.

He made the decision to retire a year earlier than planned following the influx of new members that joined the volunteer organization in the fall, which he said was “an answer to prayer.”

“It was great. It was a tremendous need that was filled,” Patterson said.

Originally from Callender, Patterson moved to the southern O’Brien County community with his wife, Christine, in late 2000. He credited his mother, Louise, with inspiring him to get involved in EMS since she worked as a nurse.

Patterson had been volunteering as an EMT for about 10 years before coming to Paullina, including for a time when he and Christine lived in Minnesota.

“I wanted to continue helping out the community,” he said of his choice to join the Paullina Ambulance Service.

Patterson spoke of his gratitude for the new members of the Paullina ambulance team for stepping up as volunteers as well as for the support the city, county and Paullina Fire Department have shown the EMS organization through the years.

“There were times the budget was a little tight, but again, the city worked with us and the community has always worked with us too,” he said. “Paullina is a great town to live in.”

He also gave credit to his wife for supporting him through his years of being an EMT, including instances where his pager would go off at 2 a.m.

“She’s my sounding board when I leave and when I come back,” he said.

Besides serving as an EMT, Patterson worked in banking — most recently at Security National Bank in Mapleton — although he also retired from that in March.

He did not have plans for retirement, although Patterson said he enjoys hunting and spending time with family. He and Christine have four kids and three grandchildren.

REGIONAL—Emergency medical services organizations across N’West Iowa play a vital role in responding to area residents when their lives are at risk.