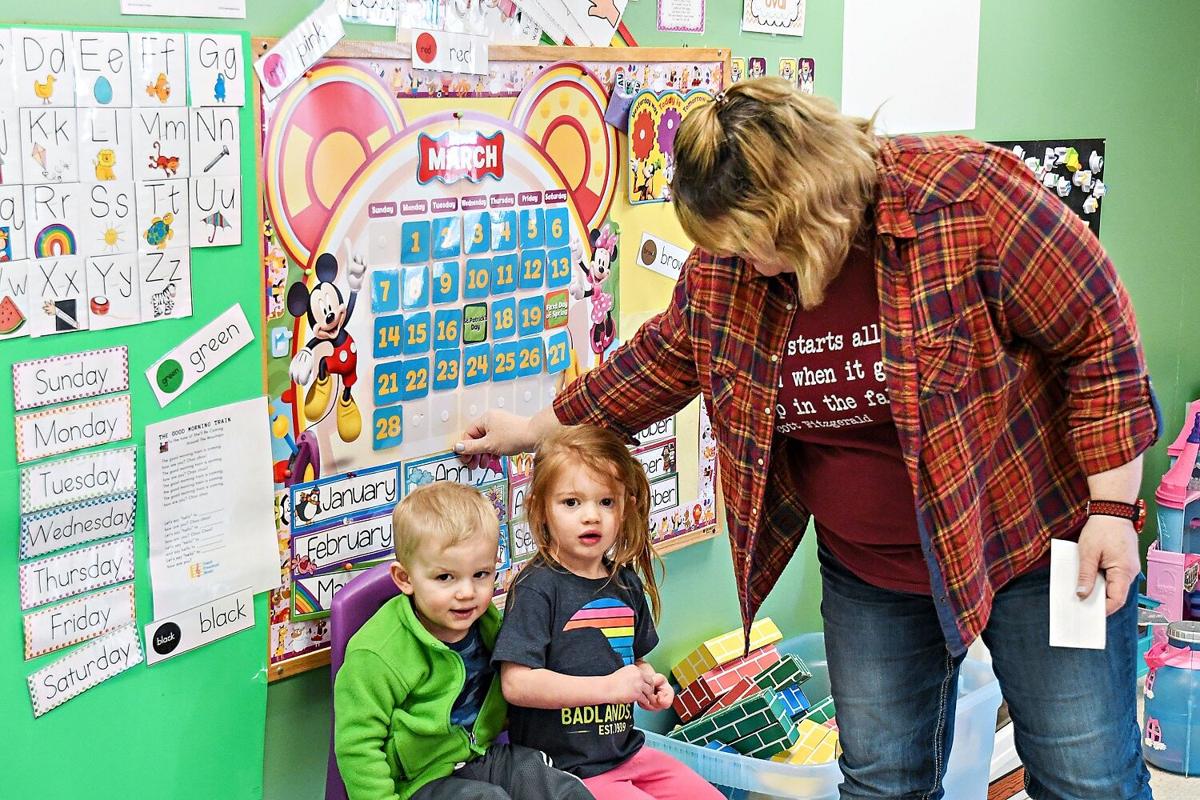 One-year-old Javin Goosen and 3-year-old Jessa Goosen sit next to a wall in one of Saving Grace Daycare Center’s play rooms as director Karey Williams points out the calendar behind them. 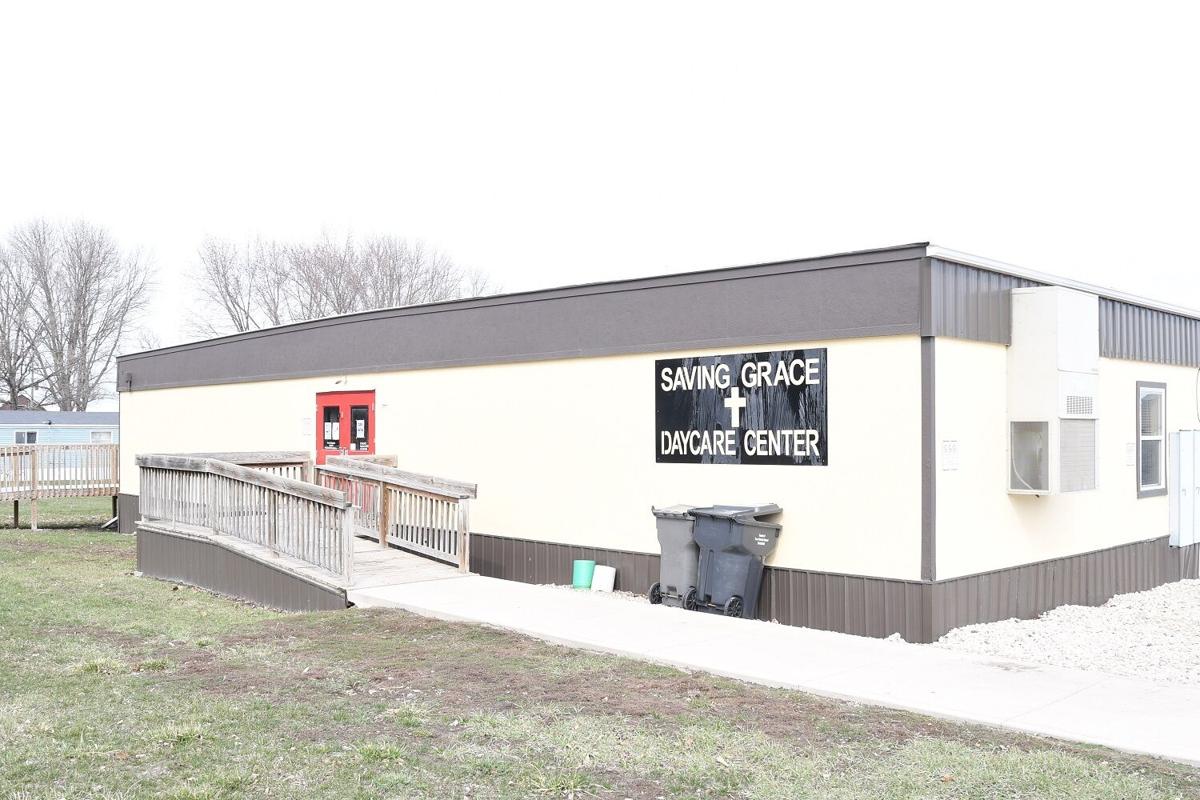 Saving Grace Daycare Center in Paullina has seen a surge of new enrollments since the start of the year and consequently renovated an indoor storage space into a room for 2- and 3-year-olds. An open house to show off the completed space is set for Sunday, April 11. 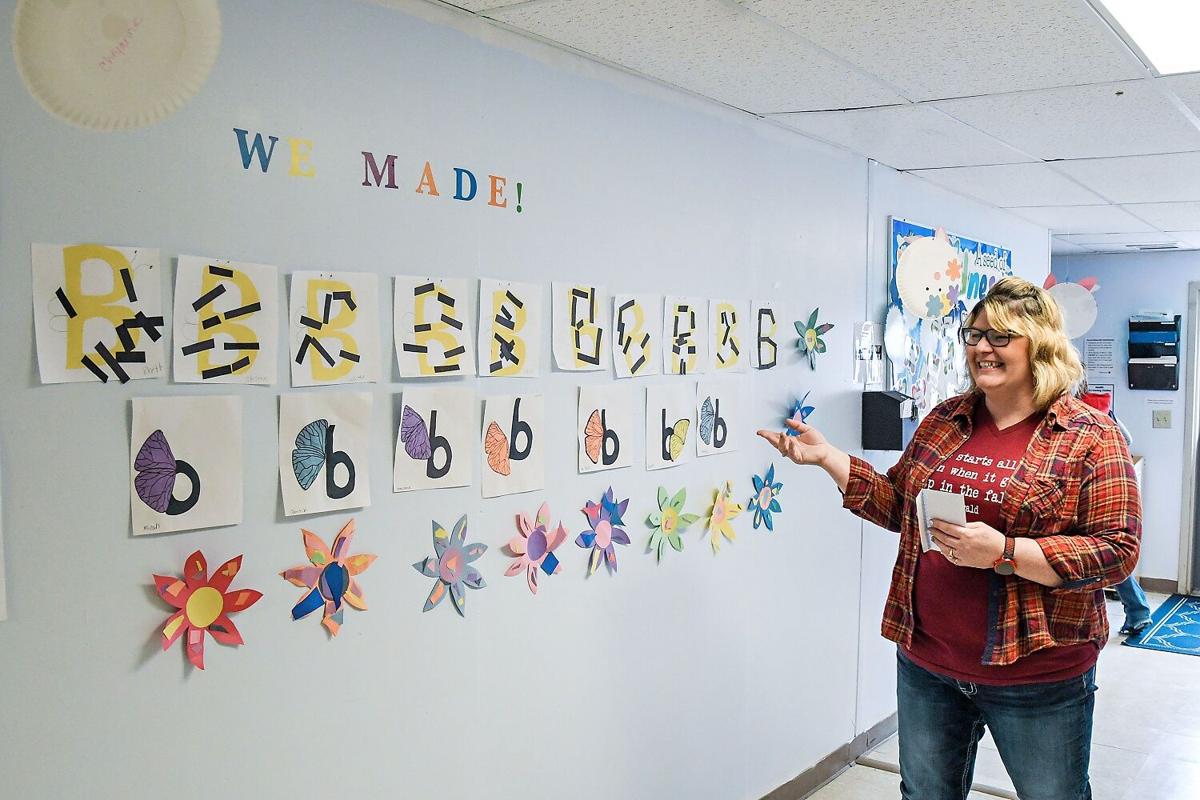 Saving Grace Daycare Center director Karey Williams points out artwork kids at the center recently made that’s on display in the hallway.

PAULLINA—A new room at Saving Grace Daycare Center in Paullina will help accommodate the facility’s growth since the start of the year.

The day care, located at 216 N. Maple St., recently added a new room for 2- and 3-year-olds that will allow the facility to serve more children in and around the O’Brien County community.

“As it stands, we are completely full until we open up our room and then that gives us a whole new possibility,” said Saving Grace Daycare director Karey Williams. “We already got three babies starting in May.”

The day care went from serving about 10 children in January to about 24 in late March. The new room, which previously was a storage room, will give the building space to accommodate another 20-25 children.

The renovation is one of several upgrades that have taken place at the day care recently. Other changes have included the installation of new cabinetry in the kitchen as well as a new stove and dishwasher. New doors also were installed on the east side of the building.

“He’s been fantastic because he’s been coming in and helping us because it’s a little day care,” Karey said. “Getting things up and running, we didn’t have the extra funds to get things going, so it just took the right people to donate to get it going.”

Additionally, Saving Grace plans to install new, built-into-the-ground playground equipment using money — about $1,000 — it earned from a fundraiser during Christmastime. An additional perk: One of the parents at the day care works as an architect and volunteered to help design the outdoor play area free of charge.

“We’re excited for that,” Williams said. “It’s just like everything’s falling into place.”

Changing the day care for the better has been Williams’ goal since she was hired as director for Saving Grace in late July. She previously provided day-care services out of her home in Calumet for seven years.

The day care only had about four children enrolled when Williams began. However, the board that oversees Saving Grace gave her leeway to more aggressively advertise the facility to attract applicants, hire more help and make changes to the building itself.

Besides donations from the community to fund the renovations, Saving Grace also has received grants related to COVID-19 relief that have helped the day care navigate the past year financially.

It also is in the process of getting approved for a food program in which the state government would reimburse the center so much money in exchange for adequately feeding the children it serves. The effect is that parents do not need to pay additional costs for their kids to eat at the day care. Since Saving Grace is a state-licensed facility, it also accepts day-care assistance.

“That makes a big difference because there are a lot of single parents in this area and that helps out with payments because day care is expensive,” Karey said.

Another change in the past year has been the use of Brightwheel, a child-care management app that lets the staff at Saving Grace communicate with parents throughout the day. It also shows parents information such as what their child had for lunch, what activities they did or, for babies, how many times they were changed.

“It’s nice that way that we get to communicate with the parents and they get to see how their children were acting throughout the day,” Karey said.

She also frequently shares photos of the kids playing and doing other activities throughout the day on the day care’s Facebook page.

“The state doesn’t allow them in the rooms because of the COVID, so the parents have to stay at the door,” she said. “So that’s just a fine way of letting the parents see what’s going on in the classrooms.

Although located in Paullina, the center has taken in children from farther out in the county who have not been able to find spots at closer child-care centers. For instance, two families live and work in Sheldon but drive their kids to Saving Grace.

“They were No. 16 on the waiting list in their day-care center,” Karey said. “Word’s getting out that we’re getting bigger, and we’re even starting to get people from surrounding areas to come.”

Saving Grace employs eight people to help with child care throughout the day, although it still is hiring for more help given the increased capacity with the new room. Karey noted the eighth employee was added a week after the center took on four additional children.

“It seems like as soon as I hire one person, we get four more and that leads us to another hire,” she said.

This story was first published in the April 3, 2021, print edition of The South O'Brien Sun.