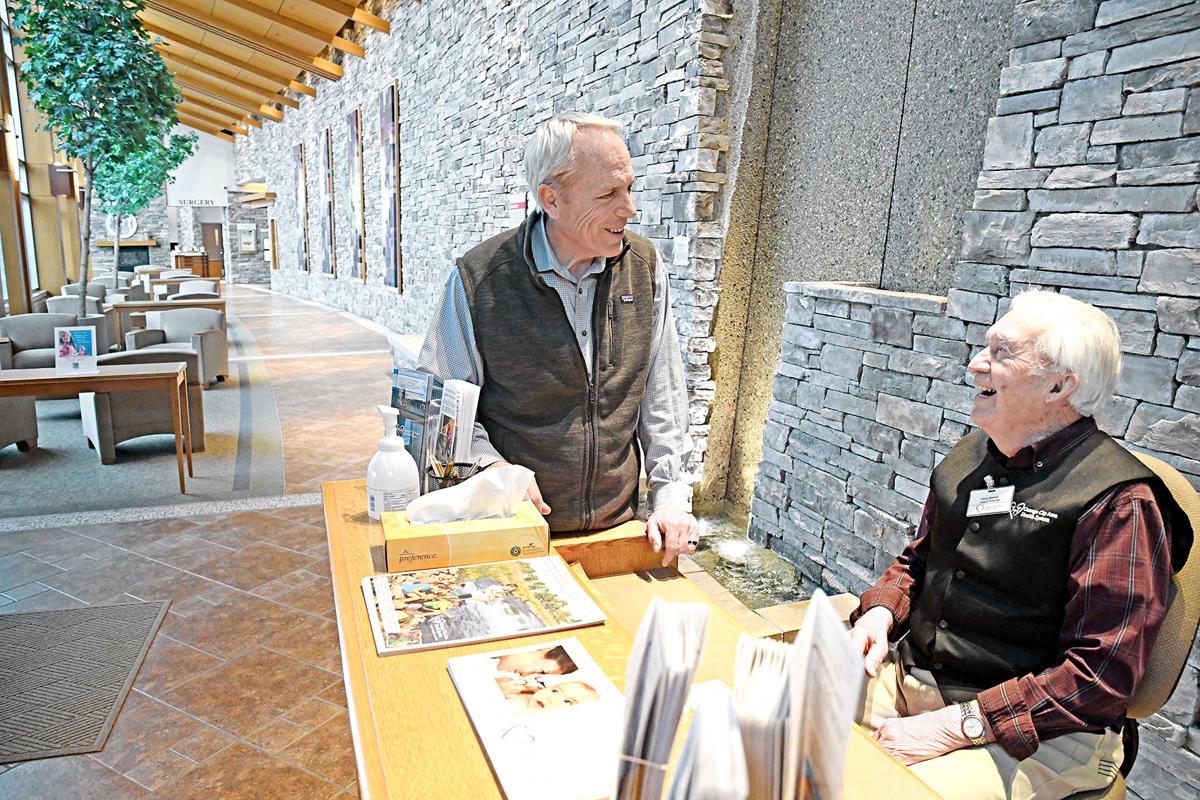 Orange City Area Health System CEO Marty Guthmiller talks to Casey Korver, a longtime hospital volunteer. According to a 2019 study by the Iowa Hospital Association, the health system generates 734 jobs that add about $33 million to the economy of the community and the surrounding area. 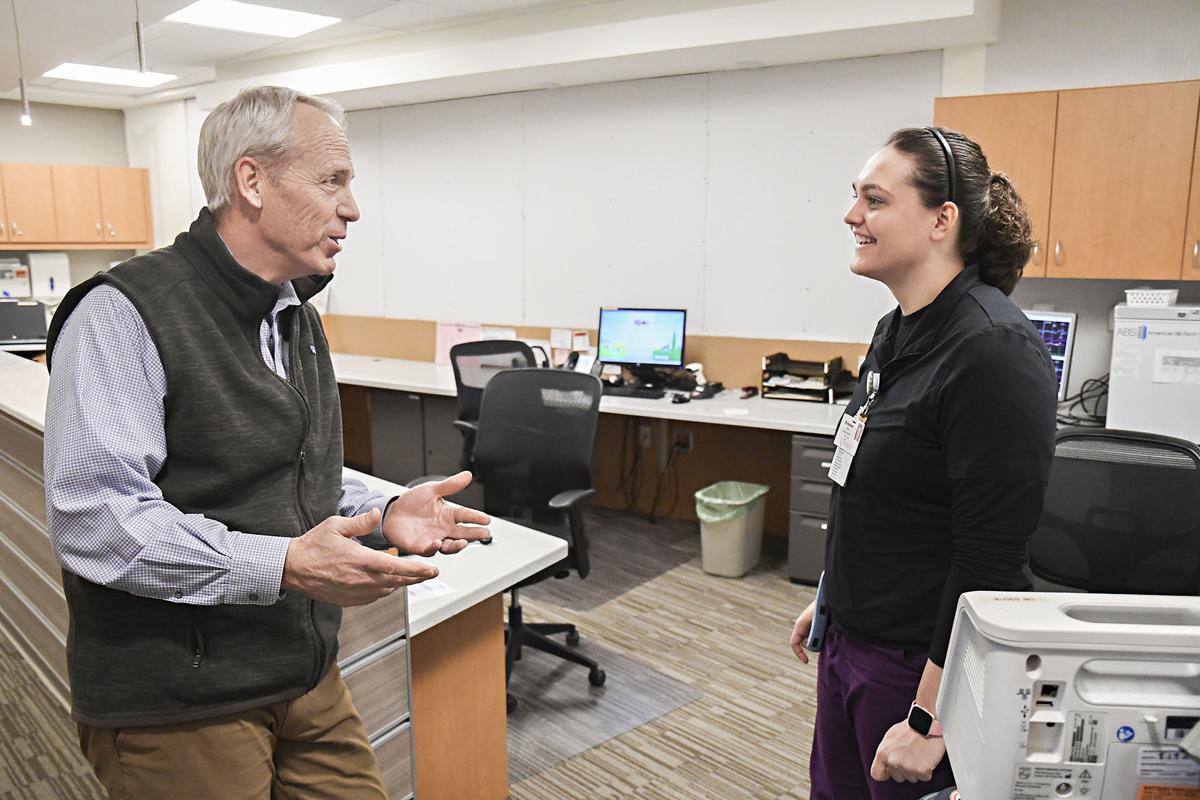 Orange City Area Health System CEO Marty Guthmiller talks to Casey Korver, a longtime hospital volunteer. According to a 2019 study by the Iowa Hospital Association, the health system generates 734 jobs that add about $33 million to the economy of the community and the surrounding area.

ORANGE CITY—Marty Guthmiller knows how important a hospital is to a community.

The 59-year-old Orange City man has been the CEO of Orange City Area Health System since March 1994.

“It’s important to take care of the health of people,” Guthmiller said. “That’s the obvious thing. It’s what our mission statement says. It’s what people immediately think of.

“But as I’ve done this and ob­­served from a very close position over the years, I’ve realized that a strong, local health system helps a strong, local economy,” he said.

According to a 2019 study by the Iowa Hospital Association, the Orange City municipal hospital generates 734 jobs that add about $33 million to the economy of the community and the surrounding area.

Of those 734 jobs, 526 are people who are employed by the health system in casual, part-time and full-time positions, while 208 are other supported jobs created by the hospital’s existence.

“We have jobs here that create use for paper products,” Guthmiller said, noting other jobs that depend on hospitals. “There are jobs created in our community for people that sell paper.”

According to the 2019 study, Orange City hospital employees by themselves spend $7,578,466 on retail sales and contribute $454,708 in state sales tax revenue.

While the health system is a significant economic contributor to Orange City, the hospital also provides a social benefit to the community.

“Typically, hospitals will ad­­vance people through various career paths and encourage them to participate in civic duties. As an example, one of our clinic nurses is the mayor of Orange City,” Guthmiller said in reference to Deb De Haan who was elected to her fourth two-year term in November.

The health system has many long-term employees.

“Because we advance people educationally throughout their careers, they tend to be some of the longer employed people in town,” Guthmiller said. “They stay in town, they become part of the town. In that way, the health system becomes part of the social fabric.”

The hospital’s medical campus located in southeast Orange City opened in May 2006, replacing a 1960s-era facility that had been located downtown.

“You can look around in this area and see what’s developed subsequent to that,” Guthmiller said. “It’s been a lot.”

For example, located less than a half mile north of the health system is the Prairie Winds Event Center, which opened its doors in 2012, and Hampton Inn Orange City, which has been in business since 2014.

Guthmiller noted the health system’s relocation to the southeast part of Orange City has had a meaningful impact on that part of the community.

“It’s provided leadership in that regard,” he said. “It was a key role of a pretty significant decade really that Orange City had.”

Guthmiller recalled seeing the construction of the hospital’s medical campus on what previously was an alfalfa field.

While the hospital clearly has invested in Orange City, Guthmiller said the community has returned the favor by investing in the health system.

He noted a recent example of that has been a campaign that has raised about $150,000 toward the purchase of a new approximately $225,000 ambulance for the hospital.

“People got behind it and invested back in us,” Guthmiller said. “That goes both ways.”

He mentioned a saying he has used throughout his career as the chief executive officer of the health system that — to him — exemplifies how the hospital and other businesses and organizations have helped Orange City grow and prosper.

“A rising tide floats all boats,” Guthmiller said. “If the tide rises, we all float on that water. We believe that the health system was very much part of that.

“It’s not so important who gets credit for the tide rising,” he said. “It’s that the tide rises.”

While he noted the hospital provides an economic benefit to the Sioux County seat community of about 6,100 and the surrounding area, that is not the health system’s purpose.

“We earn the trust and respect from people to provide care to them and their families,” Guthmiller said.

Orange City Area Health System’s 142,000-square-foot medical campus in the southeast part of the community is undergoing an approximately $3 million expansion and renovation project that is scheduled to be completed by mid-February.

The project includes remodeling and adding 7,000 square feet to the hospital’s medical office building and renovating the health system’s 9,000-square-foot birth center. After the work has been finished, the medical campus will be 149,000 square feet.

For more information on the health system, which is located at 1000 Lincoln Circle, call 712-737-4984 or visit www.ochealthsystem.org.

Orange City boutique all about customers