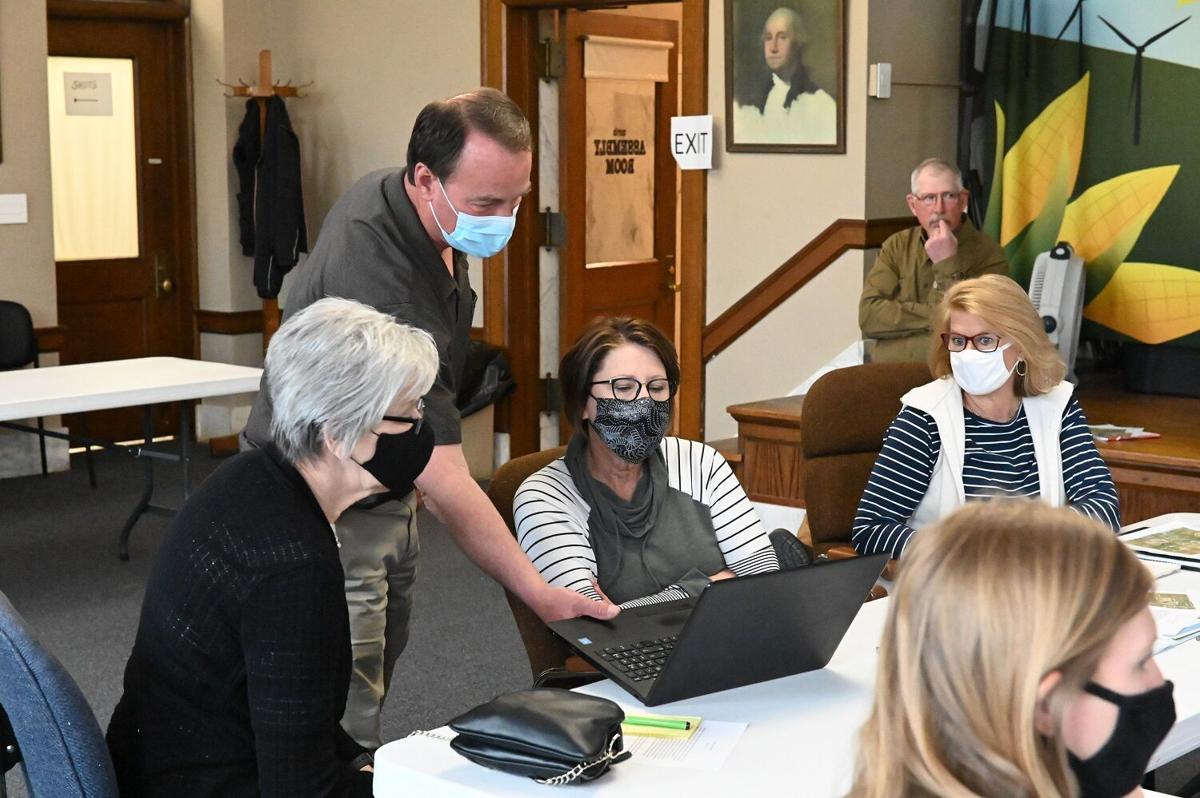 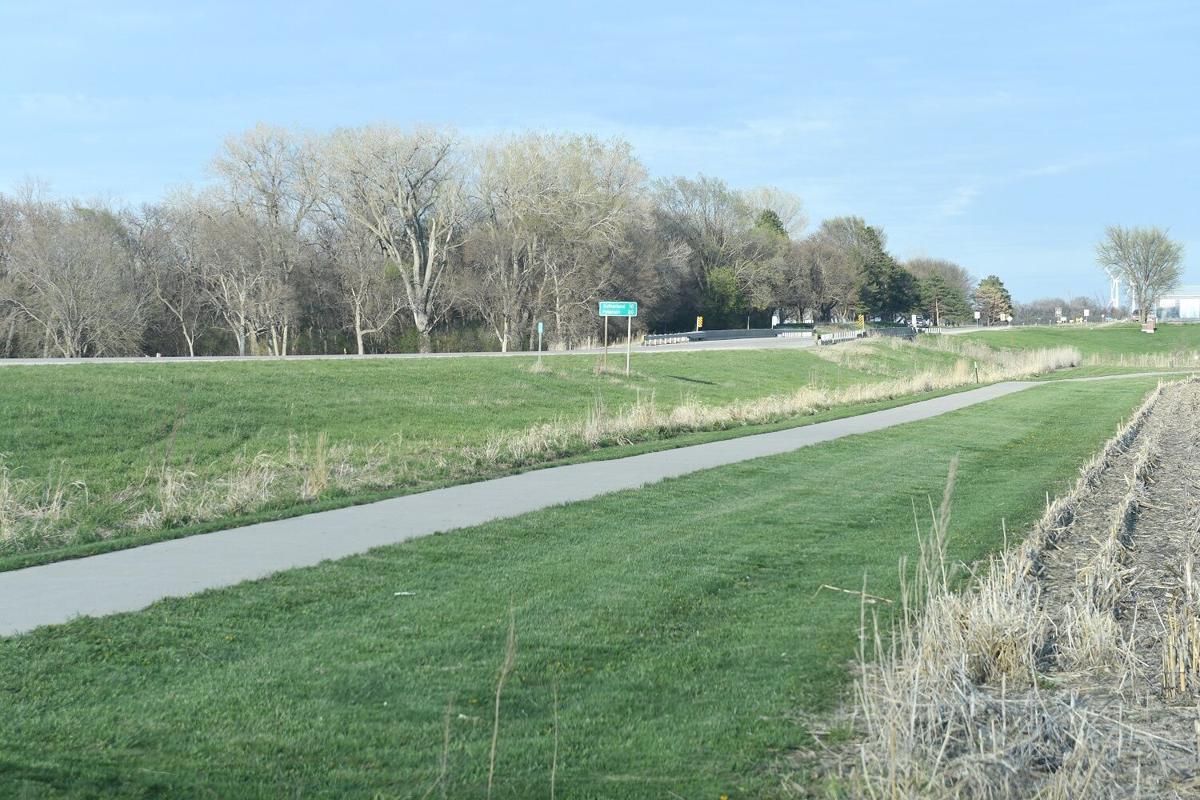 The O’Brien County Board of Supervisors discussed a potential expansion of the Mill Creek Fitness Trail near Paullina, an idea that three city residents proposed. The existing trail is about a mile long and goes from Mill Creek State Park to Maple Street.

PRIMGHAR—The O’Brien County supervisors are not opposed to the idea of expanding the Mill Creek Fitness Trail, but they did have questions about such a proposal during their meeting Tuesday, April 27.

Paullina residents Jill Rausch, Rita Kruger and Cindy Richter presented the idea to the board and requested their financial support in covering half the cost of a $2,800 engineering survey.

The other half would be covered by the city of Paullina, with which Kruger, Rausch and Richter met Monday.

Rausch said an extended trail would give a safer route for bicyclists instead of riding on county roads and could function as a path for people wanting to walk or run. The existing trail is about a mile long and goes from Mill Creek State Park to Maple Street in Paullina.

The trio had a few potential options for the expanded route, with the first measuring about 1.79 miles.

Starting about a block south of the current trail, it would go east from Maple Street along the old railroad bed that runs about a mile southeast of town before hitting Mill Creek. It then would cross the creek and continue southeast and either do a loop around a small pond owned by Deru Corporation or a loop around property owned by the James and Marjorie Tjossem Revocable Living Trust.

The second route option would be about 2.31 miles. It would extend the existing trail where it crosses 460th Street and parallels Mill Creek. The extension would continue along the creek before turning east past AgriVision Equipment and then north briefly again to parallel 460th Street. The trail then would go south to meet up with the old railroad bed traveling northwest to connect with Maple Street.

Rausch said she and the other two initially began looking into a trail expansion in 2019 but put it on hold due to the coronavirus pandemic. They recently learned of the federally funded COVID-19 Relief Recreational Trails Program, of which Iowa received $5 million to distribute to local infrastructure projects. Eligible projects could receive $500,000-$1.25 million of that amount.

Kruger noted the application period for the grant is short, since the program was announced April 1 and the deadline to apply is May 17. The project’s completion deadline would be Sept. 30, 2023, under the terms of the grant.

However, she said that could be in her and the others’ favor as they have been working on the idea for a couple years and therefore have some of the application materials ready to go, such as a sketch of what the trail would look like. They have been collaborating with Beck Engineering of Cherokee when it comes to trail design and have the support of landowners who own portions of the property the trail would cross.

Rausch said they also talked about the idea with First Cooperative Association, which owns part of the section of land by Maple Street where the proposed trail would be, but would need to follow up with the elevator due to its possible merger with another company.

One of the main obstacles the project would face is the need for a bridge to be constructed over Mill Creek. Kruger said there are four stone pillars where a previous bridge was that allowed trains to cross the 210-foot gap across the creek.

If she and the others receive the grant, they would allot the funds to cover bridge expenses then fundraise and pursue additional grants for additional trails construction costs. Rausch said in 2019, Beck Engineering estimated the bridge could cost about $2,000 a foot.

County engineer Scott Rinehart weighed in on the discussion and asked if the women were thinking of using the existing pillars as a base for a bridge, since the 210 feet the pillars span is more distance than the actual width of the creek.

“If I was going to do that project, I’d do the hydraulics and see how big the bridge would really be,” Rinehart said. “With a bike trail, you could put a sump on each end and say, ‘In high water, we’re going to let the water go over.’ You’re just not going to be able to ride the trail. Then you could shorten the bridge.”

He asked who owns the property where the trail would cross the creek. Rausch said the county conservation board owns that parcel of property while the city of Paullina owns a portion of the route leading east from the city.

The supervisors also questioned the Paullina residents about who would be responsible for maintaining and repairing the extended trail once it is completed, since the properties the trail encompasses has many owners.

Rausch said there would likely be minimal maintenance needed on the trail.

Since conservation owns the portion that would include the bridge, Rausch asked if conservation would be able to include a line on their budget dedicated to trail repairs and maintenance. Supervisor Dan Friedrichsen said that could be a possibility as long as the conservation organization would maintain ownership.

Supervisor Dennis Vanden Hull said that since a lot of people who camp at Mill Creek State Park would likely use the trail, it would fall under the conservation organization’s purview.

Rausch said she spoke with former conservation director Terry Boltjes about the trail idea in 2019. Bootsma suggested she also talk about it with Boltjes’ successor, Brian Schimmer, to get the conservation board’s thoughts on the project.

Bootsma and Friedrichsen agreed the trail extension was a good idea, and Vanden Hull also said it would be nice for there to be more places people could ride bikes.

The O’Brien County Board of Supervisors also addressed these agenda items during its meeting Tuesday, April 27: